Edgar Allan Poe: The Original Imp Of The Perverse 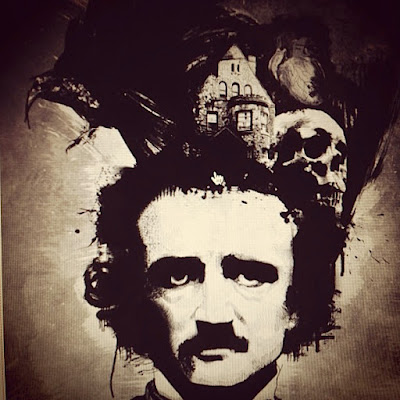 EDGAR ALLAN POE:
THE ORIGINAL IMP
OF THE PERVERSE

An overview based around the book ‘VISIONS OF POE’, a
selection of EDGAR ALLAN POE stories and poems with
photographs and an introduction by SIMON MARSDEN
(Michael Joseph/ Webb & Bower, £14.95)

‘Sleep
those little slices of death,
how I hate them...’
(Edgar Allan Poe, quoted on the introduction to
‘Nightmare On Elm Street 3: Dream Warriors’) 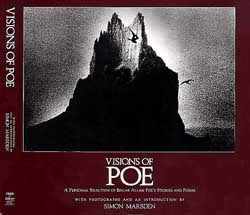 A gothic window from Castle Bernard, County Cork, mist-shrivelled, ivy-entangled. Perspective is vague, so that at first glance it’s a plundered grave, then it’s a door opening out onto a dread landscape of mystery and inexpressible terror. But no, it’s only a window. Then there’s a stone cadaver etched against the wall of Beaulieu House, County Louth. A grinning skeleton, a macabre victim of a premature burial or the Red Death plague, obscenely disinterred and left there to putrefy. But no, it’s only a particularly grotesque sculpture.

The photographs, from ‘Visions Of Poe’ (Michael Joseph/ Webb & Bower, £14.95, 1998) were snared by the artful Pentax of Simon Marsden whose previous work includes ‘In Ruins’ (revised edition, Little Brown, 1997), a highly personal photographic essay of churches and historic buildings in his native southern Ireland. On such evidence it’s obvious that Marsden uses his lens not just to record – but to interpret, selecting his targets, his lighting and angles, to build atmosphere. In this case to illuminate a sympathetic descent into the maelstrom of psychological horror created by the fiction and poems of Edgar Allan Poe, examples of which are matched to Marsden’s pictures – there’s “The Raven”, “The Fall Of The House Of Usher”, “The Masque Of The Red Death” and others. 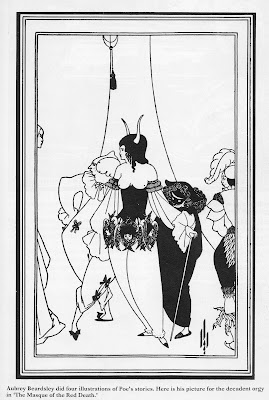 Poe was a dark fantasist, with a natural perversity he considered to be a universal condition. ‘His plans were bold and fiery, and his conceptions glowed with barbaric lustre. There are some who would have thought him mad’ Poe writes of Prince Prospero – the decadent aristo who seals himself into his castle to escape the ravages of the ‘Red Death’. A man whose works are ‘delirious fancies such as the madman fashions. There were much of the beautiful, much of the wanton, much of the bizarre, something of the terrible, and not a little that which might have excited disgust.’ Poe could have been describing his own art, which is riddled with recurrent necrophilia, disease, cannibalism, demonic possession, resurrection of the dead, madness, mesmerism and premature burial, all described in a deliciously morbid prose that lingers on decay and death.

Born in the Michael Dukakis city of Boston over two-hundred years ago – 19 January 1809, Edgar Poe was immediately orphaned. His father, the Irish actor David Poe, deserted the family in 1810 and died soon afterwards. His mother – Elizabeth, died of pneumonia a year later. The middle name ‘Allan’ he took from the stepfather and benefactor he alternately vilified and, when finances deemed it necessary – fawned over. The young Poe was ‘removed’ from the University of Virginia for immoderate drinking and gambling which amassed debts of $2,500, and was subsequently court-martialled from West Point Military Academy for deliberate neglect of duty. 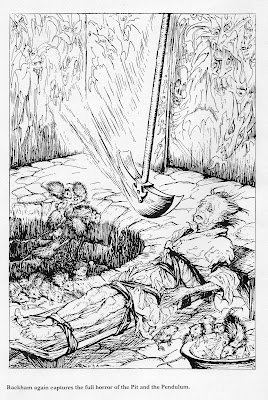 He nevertheless went on to reasonable success as editor of various periodicals – ‘The Southern Literary Messenger’ and ‘Graham’s Magazine’, minor triumphs again sabotaged by his personality problems which tended to terminate each position with the sour fetor of acrimony. He was neither a pleasant, nor an easy work colleague. In mitigation, Poe’s notorious drink problem was exaggerated by a diabetic condition, complicated by a ‘brain lesion’ that rendered him particularly succeptible to alcohol. His use of opium and laudanum is also well-documented, but hardly exceptional at an time when such tinctures were the widely-accepted valium of their day. More genuinely odd is his marriage to his thirteen-year-old cousin, Virginia, who was already ill with the tuberculosis that was to kill her. The ‘consumption’ that seems to have been a source of Poe’s unhealthy fixation – not unconnected to the memory of his mother’s death. 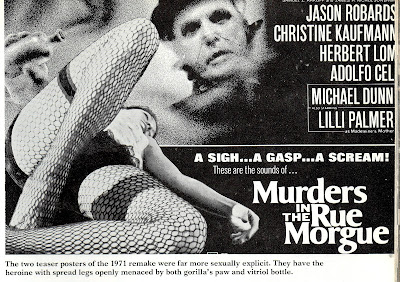 Dour and melancholic, Poe favoured neat black clothes. He was socially ill at ease, his conversations as precise and formal as his writing was meticulous. He wrote poems. He wrote protean Science Fiction that influenced HP Lovecraft, and Jules Verne – to whom Poe was ‘le créateur du roman merveilleux-scientifique.’ He wrote detective fiction, including ‘The Murders In The Rue Morgue’ (‘Graham’s Magazine’, April 1841) from which his ‘C Auguste Dupin’ served as A Conan Doyle’s model for ‘Sherlock Holmes’. But above and beyond these things, Poe created an image. The image is dark and malevolently brooding. The image is Gothic horror, a nightmarish fiction of all-pervading repulsion so obsessive that it survives and even subsumes its persistent reinterpretation by literary critics, symbolists, Freudians – and film-makers. From a single short story sequence novelist-scripter Richard Matheson was able to flesh out an entire movie – the Vincent Price/ John Kerr 1962 chiller ‘The Pit And The Pendulum’. Roger Corman, whose series of Poe adaptations stand as his most startlingly disturbing work, similarly expanded the seven-page prose-poem ‘The Masque Of The Red Death’ (in ‘Graham’s Magazine’, May 1842), into a horrifically effective full-length film that inhabits Poe’s mythos remarkably accurately, its malign spell absorbing and colouring all additional invention into itself like a spreading bloodstain. Corman’s ‘The Fall Of The House Of Usher’ (1960) with Vincent Price is a wide-screen shocker pervaded by a genuinely flesh-crawling atmosphere, while Boris Karloff joins Price and Peter Lorre in Corman’s special-FX classic ‘The Raven’ (1963), announced as ‘The Macabre Masterpiece Of Terror’. 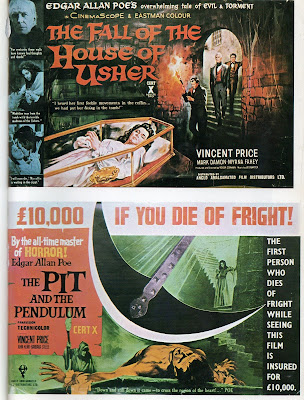 In much the same way, Simon Marsden’s photographs not so much illustrate Poe’s stories as are infected by their bacillus, they enter Poe’s twisted vision, they draw vile energies from his morbidly introspective fascinations, and peer out through the distorting lens of his perversity.

Poe died – as that heavily over-written scenario demands he must, in grotesquely romantic squalor. After failed suicide attempts, bouts of insanity, fits and delirium tremens, he was on his way to Richmond to marry himself out of penury, when he disappeared during a stop-over in Baltimore. He was found much later on the street in a wretched condition. Following four days of hospitalised raving he groaned ‘lord, help my poor soul,’ and died. He was aged just forty. 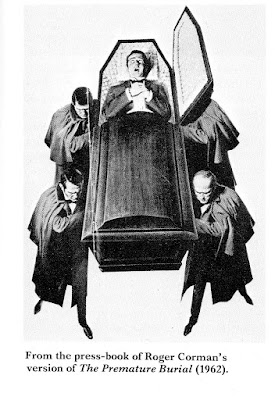 Edgar Allan Poe’s life has been described as ‘a long slow suicide,’ the black drugs ‘n’ booze aspects of which were posthumously exhumed by decadent French poet Charles Baudelaire who helped embellish them into the unshakably powerful literary mythology that persists. It was left to Anthony Burgess to question that myth in an ‘Observer’ book review (15 January 1978) by pointing out that ‘Poe’s life, though wretched enough, was not exceptionally so. It was the life of any writer struggling in a world devoted to commercial values.’ What makes Poe’s work so exceptional – Burgess argues, is his apparent self-absorption in that ‘wretchedness’ which – like Marsden’s camera, tints and taints all of his life-experience, and all of his creative perceptions. Poe was rigidly agnostic, a man who – according to expert fantasist Sam Moskowitz, ‘knew that the ultimate damnation lay in the distortion of a man’s own inner consciousness and not in any supernatural event’ (‘Science Fantasy’ no.38).

Irregular, querulous and eccentric, unacknowledged in life and unmourned in death, Poe casts a long and blackening shadow that’s now exquisitely reinterpreted through the demonic gargoyles and macabre mansions in Simon Marsden’s ‘Visions Of Poe’. 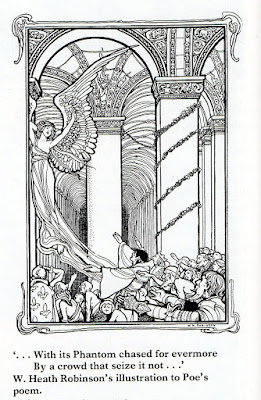 Posted by Andrew Darlington at 20:36

FIND OUT How You WILL Master Your Habits And Reprogram The Subconscious Mind To Get Any Result You Want In Your Personal Development and Success!

BlueHost is ultimately one of the best website hosting provider with plans for all of your hosting needs.