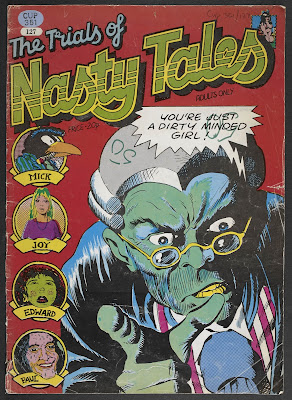 What’s so funny ‘bout Peace Love and Understanding? Well, nothing. Except that TV-clips of Hippies in silly hats, idiot-dancing, and human-daisy-chains in the park, are in danger of eclipsing the significance of what really went on in those down-dirty late-sixties. ‘Be Sure To Wear Some Flowers In Your Hair’– of course, but chances are that Charles Manson will also show up at the Love-In. For every Woodstock there’s an Altamont. For every Flower-Child, a Street-Fighting Man. 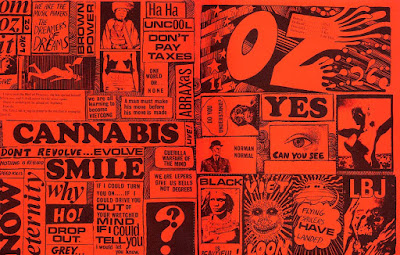 David Huxley’s valuable research into one particularly neglected cranny of the era, magicked into life by the lavish visual explosions provided by Headpress lay-out – vividly visceral, explicit, disturbing… and fun, goes some way towards redressing that (sub)cultural imbalance. Comics – or ‘Comix’ are his thing. The strips that ran in the ‘underground’ periodicals, and their more specialised comic-book spin-offery. More specific yet, their British manifestations. Artists such as Hunt Emerson. Tracing his lines, which form garish detonations of ludicrous invention, fluid – but angular. Faces, shapes, and figures in dynamic melt-down, vibrating with psychedelic energies. Elaborate spirals and coils of brain-matter, goggle-eyes veiny and drifting free from their sockets like loose balloon moons… 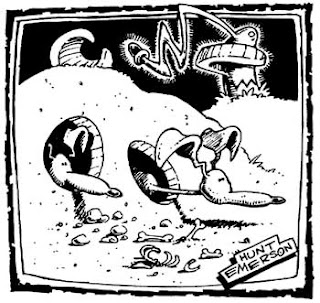 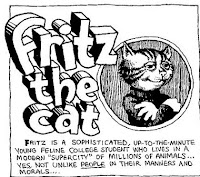 Comic-strips and animation have always been something of a cultural oddity. Their exaggerations are implicitly surreal. Think ‘Desperate Dan’ – no, really think about it. What the hell is that about? Think about the open-ended repetitive non-story structure of ‘Wylie C. Coyote & the Roadrunner’. Existential ‘Theatre of Cruelty’ or what? And it’s always been slightly subversive too. As far back as you can go Political Cartoons have been a weapon of ridicule against the corrupt pomposity of the ruling class. The sixties-cum-early-seventies had no monopoly on any of this. What it did do was reignite it all through new mix-and-max outrage combinations. Through a generation of new artists, Robert Crumb among them, illuminating the youthquake happening all around them. And by their being independently published through the new global phenomenon of disreputable titles calling itself the ‘underground press’, made possible by the proliferating cheap accessibility of offset print-technology. It also benefited from good timing. 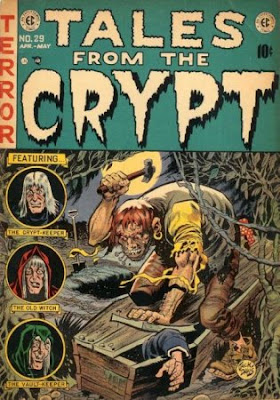 The gore-overkill of Will Gaines’ 1950’s manic over-the-top EC ‘Tales From The Crypt’ led to questions in the House, and the subsequent imposition of the Comics Code, ushering in the gentler mockery of ‘Mad’, and an interlude of squeaky-clean aspirational UK comics following the pristine parentally-approved example of ‘Eagle’. So ensuring that a decade-long frustration built up among cartoon-artists, and a sleaze-thirsty readership, a combination that was bound to blow sooner, rather than later. More? Fuelling the ‘underground’, as well as exotic drugs, trippy vinyl, and a retro-affection for Aubrey Beardsley there were reference points to Marcuse’s ‘Frankfurt Circle’ – a New Left Think-Tank, McLuhan’s ‘The Medium Is The Massage’ proclaiming the end of literacy as we know it, and the dawn of Homo Ludens – the ‘Play-Power’ ethic. All conspiring together to show that absurdity, stupidity, chaos and black humour are just as valuable philosophical constants as logic, reason and rationality. Ideal ingredients, in fact, for graphic excess. 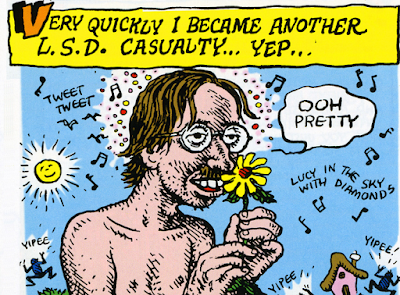 Initially the visual dimension of the UK titles – ‘It’, ‘Friends’, ‘Oz’, ‘Styng’ and the rest, was characterised by an over-reliance on American reprints (Crumb’s ‘My First LSD Trip’, Gilbert Sheldon’s ‘Wonder Wart-Hog’). But the early local contingent soon includes Jeff Nuttall’s free-form cut-up ‘Physiodelics’, Mick Farren’s scripts for Edward Barker, the ‘Largactilites’, Chris Welch – creator of the odd SF-saga ‘Ogoth’ who doubled by reviewing Pop singles for ‘Melody Maker’, Hunt Emerson’s debut in Birmingham Arts Lab’s ‘Large Cow Comix no.1’ through to his ‘Thunderdogs’ mayhem in 1980 and ‘Firkin The Cat’ for ‘Fiesta’, Brian Bolland’s ‘Little Nympho In Slumberland’ in ‘Graphixus no.3’, Mal Burns, Bryan Talbot, and much more. 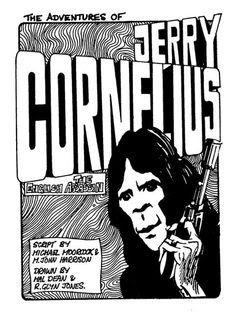 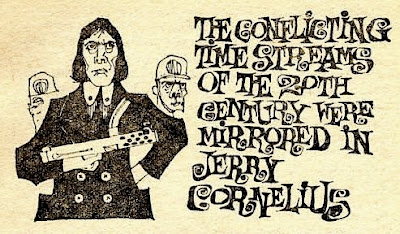 Michael Moorcock’s innovative SF-fantasia ‘Jerry Cornelius’ was serialised through issues of ‘Frendz’. As regards self-contained titles, ‘Cyclops’ – at just 15p from the ‘Innocence & Experience Press’, cover-proclaims itself ‘The first English Adult Comic Paper’ in July 1970, followed by Felix Dennis’ ‘COZmic Comics’ – no.3 of which consists entirely of British artist Mike Weller’s work. Then the spectrum of titles runs from Alchemy Publications’ ‘Brainstorm Comix’ with a no.1 print-run of 3,500, to Joe Hirst’s modest Bamforth-derived spirit-duplicated naughtiness via Filey-based Fiasco Press. From ‘Napalm Kiss’ to Robert Crumb’s celebrated orgy-spread highlighting ‘Nasty Tales no.1’. 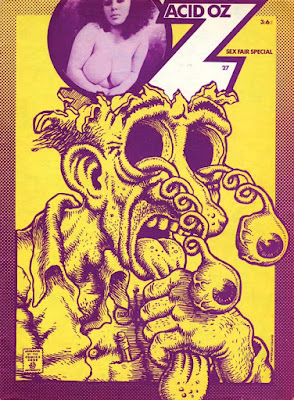 And the Establishment played its scripted part to perfection. We’ll be outraged – it said, if you’ll be outrageous. They were duly outraged. They took the ‘Oz’ Skool-Kids issue to the Old Bailey, and busted ‘Nasty Tales’ for obscenity. Both shock-chic stories are fully recounted here by David Huxley (who modestly omits his own art-contributions to Denis Gifford’s ‘Ally Sloper’, ‘Blood, Sex & Terror’, ‘StreetQuomix’, and ‘Either Orcomics’, while admitting to an SF weirdo in ‘Pssst’). And – although falling outside this book’s time-frame, the tradition of legalistic repression continues into the 1990’s when ‘Savoy Editions’ artist-publisher Dave Britton is jailed for the immaculately nasty ‘Lord Horror’ comic-books. 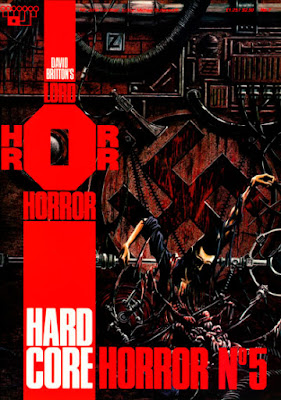 So where did it all go? Well, it continues to continue in grubby low-profile photocopied small-press editions. ‘Viz’ graduated from bedroom fanzine into a corporate institution. ‘2000AD’ – launched by IPC as a continuity of the ‘Eagle’-mentality, complete with an updated Dan Dare, discovered its long-term survival strategy through more sophisticated adult material with enough severed heads, erupting eyeballs and gratuitous nudity to bring a macabre glow to Will Gaines’ tomb. Both titles thrive. While Shelton’s collected ‘Furry Freak Brothers’ are out there on Amazon even now, alongside the lavish graphic-novel editions of DC and Marvel comic-book heroes, their drug-wise antics just as sniggery-relevant to today’s pharmaceutical tastes as they were Cheech-&-Chong-wise back then. Robert Crumb is the subject of at least one docu-movie, with a spin-off soundtrack CD. Felix Dennis – once ‘Oz’ wunderkind, is a media fat-cat with a sideline in self-publishing his own poetry. And now David Huxley’s cool academic prose preserves, keenly analyses, places in context and neatly squares the cartoon frame of the best of the rest. Cool. Groovy. Highly recommended… 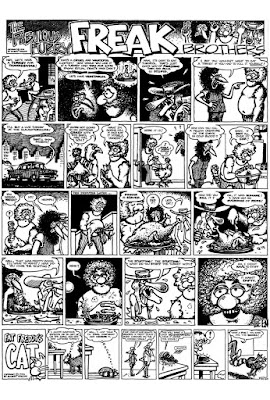 Posted by Andrew Darlington at 18:01

There is a chance you're eligible to get a $1,000 Amazon Gift Card.