Back-Story: 'A SAUCERFUL OF SECRETS' 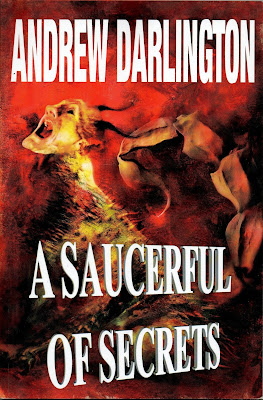 A SAUCERFUL OF
(MORE) SECRETS:
THE WRITING OF…


It starts like this. Simon Clark mentions in passing that he’s been contracted to compile an anthology of Sherlock Holmes stories. I’ve never actually written fiction according to specific guidelines. When I write, it’s according to whim or nudge. But this is different. Conan Doyle’s Holmes is up there on fiction’s pantheon of great myth-figures, alongside Tarzan, James Bond and Superman, screened from Basil Rathbone and Peter Cushing all the way to Benedict Cumberbatch. We all know him. But every one of Simon’s contributors will be doing the familiar tropes, so why not approach it from the tangential angle of other mythos elements? A present-day spin on the lycanthrope suggestions behind the Baskerville Beast, entangled with the real-life guilt-torment of a missing child? From that point the story wrote itself. And Simon liked it. Only problem was the publisher remit specified the inclusion of Holmes himself, on a foreign escapade. So I sit down and write “The Strange Death Of Sherlock Holmes”, predicated on the idea that as Doyle’s original Holmes cases were appearing in issues of ‘The Strand’, HG Wells was publishing chapters of his ‘The Time Machine’ in ‘The New Review’. The story duly appears in Simon’s ‘The Mammoth Book Of Sherlock Holmes Abroad’ (Robinson, 2015), while “The Beast Of The Baskervilles” debuts in the online ‘Tigershark’ magazine, then here in my ‘A Saucerful Of Secrets’.

There were other projected anthologies. Maxim Jakubowski was compiling two, one on Holmes’ devious adversary Moriarty, the other centred around the ‘Jack The Ripper’ legends. So I set about writing “My Name Is Jack” – with a protagonist named Jack Harlan as a deliberate reference to Harlan Ellison’s “The Prowler In The City At The Edge Of The World”, a ‘Dangerous Vision’ that projects the Ripper into the future, spliced to the idea of implanted humans drawn together by an outside agency vaguely remembered from John Mantley’s 1956 novel ‘The Twenty-Seventh Day’. That story is now in ‘The Mammoth Book Of Jack The Ripper Stories’ (Robinson, 2015). The other, an extravagant steam-Punk romp with Moriarty reanimated after his death at the Reichenbach Falls, is first published here. Its final paragraph attempts to replicate the unsettling shock at the close of Robert Silverberg’s 1969 temporal-travel novel ‘Up The Line’, where time is rewritten and the narrator ceases to exist.

Once primed, those stories began a chain-reaction of tales jostling for my attention, resulting in more anthology and magazine appearances, online and in print. Leading up to ‘A Saucerful Of Secrets’, not my first book, but my first short story collection. Yes, the title is taken from Pink Floyd’s second album, their last to fully include the mercurial Syd Barrett – who I may, or may not have briefly encountered beside Drypool Bridge in Hull (see the poem in my ‘The Poet’s Deliberation On The State Of The Nation’, 2016!). But, in the same friendly tribute way, a number of my stories and poems borrow their titles from songs. Most of the stories in this collection are new, all – hopefully, contemporary, but informed by my degree of longevity. “Refuge” is a sympathetic take on the so-called migrant crisis, while “The Non-Expanding Universe” deals directly with my own memories of domestic violence. Stan Barstow – the kitchen-sink author of ‘A Kind Of Loving’ once confided to me that today’s ‘committed’ writers should be setting their work within the immigrant-community. So this is also my nod to his advice.

It’s odd, my first-ever short story sale was to the New English Library anthology ‘Stopwatch’ in 1975. All the writer primers tell how to lay-out a manuscript and research your market. I did nothing of the sort. I was working at a print factory. The guillotine operator would slice huge sheets of paper down to the required size, shunting off-cuts into the waste cart, which – as an impecunious poet, I would then salvage for my own use. So my “When The Music’s Over” was typed up on pale green sheets measuring 12”x6”, and sent off to SF activist George Hay who was editing the academic-Lit magazine ‘Foundation’ at the time. The magazine didn’t even use fiction, but it fortuitously happened he liked the story and was compiling an anthology at the time. Would I mind if he used it there? This seems too easy. Another story – “Matrix”, was accepted by ‘Science Fiction Monthly’, who paid me £22 upfront, but the magazine went extinct before they could publish it. Nevertheless, other stories appeared, in the American ‘Space And Time’, David A Sutton’s excellent ‘Fantasy Tales’, and a series of German paperback anthologies. But the natural story-by-story progression was disrupted by lucrative seductive Music Journalism, which lured with opportunities of hanging out with Rock stars, plus well-paid non-SF stories in glossy magazines, live poetry-readings up and down the country, and other delightful distractions. 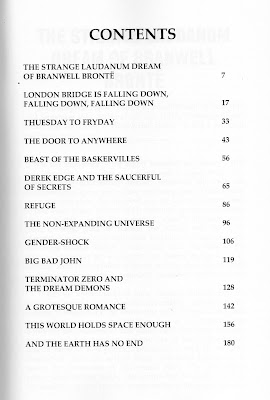 Yet things eventually came together. ‘Derek Edge’ is a series-character I’ve used in a number of tales, an awkward adolescent misfit Frankensteined together as part me-as-was, gene-fused with part of a chubby misfit-loser teen-friend. My “Derek Edge And The Sun-Spots” appeared in the fine ‘Kitchen Sink Gothic’ (2015) anthology from Parallel Universe. So it’s only appropriate that when the full story-collection was conjectured from the same publisher that he should be here too. The title story – “Derek Edge And The Saucerful Of Secrets” bears a dedication to Frank S Pepper, the prolific comic-strip scripter who wrote ‘Tiger’s Jet-Ace Logan picture-frames from which I lift the image of the Caretaker’s three-clawed hand, and Sydney Jordan who created ‘Jeff Hawke’ from which I vaguely derive the Temporal Guardians (‘Pastmaster’).

Although, gratifyingly, most of the stories are new, the oldest – “And The Earth Has No End”, goes back some way, but despite various rewrites it never quite found its proper form, until now. Based on Hegel, the idea that perception is ‘learned’, blended by the contortions of sub-atomic physics in which the observer influences what is observed, it questions the truth of reality itself. The sequence by the pool is a deliberate Salvador Dali painting, but should the penis-into-anus bit be censored or modified? It went through a number of contortions until this final version. Which prompted a sequel – or prequel, “The World Holds Space Enough”, explaining how this pliable alternate cosmos came into being. Strung across such a long period of evolving time it was necessary to introduce continuity, hence the recurring characters. A third part of this cycle – the poem “Beautiful Pagan”, ‘the melding of new, and ancient geographies, from meson and grimoire, opened this passage south, through ice-fields to the unexpected continent, beneath this cold dark moon’ is in my ‘Euroshima Mon Amour’ (2001) Sci-fi poetry collection.

“Gender-Shock” also started out as a years-back exercise, handwritten in ballpoint, returned to periodically, but uncompleted. Sex is not a duality, but a spectrum – we now know this, but how to construct a society based around that understanding? So the concept of normality becomes something up for renegotiation. The protagonists are gender deviants. How is a lawyer to defend them? The difficulty in portraying a totally pansexual society is that gender so pervades language it’s problematic to eradicate it. This tale is constructed by dispensing with every use of ‘he’, ‘she’, ‘himself’ or ‘herself’ with every character purposefully gender non-specific – except for the single case of the transgressor, who is on trial specifically for that unforgivable deviation. To complete the story, with revisions, I added a maybe opt-out resolution with the fallback solution of a convenient enclave. Nevertheless, I feel it works.

But every story tells a story. I wrote the far-future “Eternal Assassin” about a sentient parasitic organism which flits through hosts across immense spans of time. When Philip Harbottle published its first version in his ‘Fantasy Adventures no.1’ (2002) he insisted on censoring certain playfully-explicit passages. When the full unexpurgated version was revived as a hardback with beautiful James Cawthorn artwork as ‘Andrew Darlington’s Eternal Assassin’ (Spectre Press, 2012), publisher Jon Harvey told me there’d been enquiries asking if there were other stories featuring ‘Adsiduo Sicarius’. So I wrote, “Terminator Zero And The Dream Demon”, although vastly different in tone, to suggest the origins of this character in deep prehistory. Some of it is real. Peter Care is a real filmmaker. I worked in Sheffield with Adi (Newton) who is the thinking head of Clock DVA who recorded the ‘Thirst’ album (Fetish, 1981). A third story in what is now a cycle, is now included in the relaunched ‘Weirdbook no.32’.

It’s been pointed out that a cat called ‘Jingle’ appears in two stories. That’s because he was also real. And “Thuesday To Fryday” not only records the contours of a real-life relationship without closure, but recounts his death, if not exactly as here recounted.

I knew of, and admired the style and quality of the books published by Parallel Universe, my inclusion in their ‘Kitchen Sink Gothic’ anthology prompting negotiations towards this short-story collection, for which Vincent Chong has created the remarkably-effective cover-art. I love what they’ve done. And Simon Clark… who’d been a catalyst, adds a blurb. 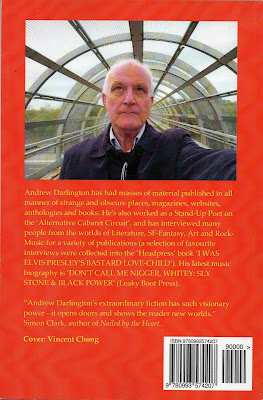 Amazon review:
This Saucerful is a plateful of tasty tidbits
By Michael Yates on 5 April 2016.
Format: Paperback
Science fiction isn’t really science, otherwise it would be imprisoned in textbooks. Andrew Darlington is healthily aware that he’s in the business of writing fantastic fiction, so his “warped sci-fi” is resplendent in literary conceits. A drunken Branwell meets a giant bee and discovers there might be a universe in which he becomes the most famous Bronte; Conan Doyle’s Prof Moriarty is “reanimated” by futuristic biologists but technology betrays him in the end. And Mr Darlington knows his real subject matter is narrow human society – like the one in which sexual identity is a major crime – though his characters may patrol the whole universe. It’s a sprawling and inventive set of stories and I enjoyed it.
THE ZONE online review at: www.zone-sf.com/wordworks/sauceros.html
Posted by Andrew Darlington at 14:25

You might be eligible to get a free $1,000 Amazon Gift Card.

Follow our trades right now and profit up to 270% a day.

BlueHost is the best hosting company for any hosting plans you need.