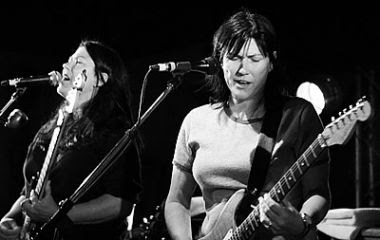 A BIGGER SPLASH
THE BREEDERS
at ‘Leeds Metropolitan University’, Yorkshire

Watching Breeder Kim Deal chain-smoke is an entertainment in itself. Gripping cigarette between teeth whenever a vocal break provides an opportunity, her face contorts with effort, her mouth a figure-of-eight around the cancer-stick. Then she’s exhaling and wheezing huge plumes of noxious fumes as if it provides some kind of psychological life-support system. And not having mastered the old Blues-player’s art of temporarily impaling the smouldering butt on guitar-neck strands during songs, she hastily drops it to the floor when her voice is needed, to be retrieved later, perhaps re-lit, or failing that – the crush-pack on the amps is plundered for a replacement. And then another.

There’s no Dry-Ice for the Breeders, but that’s hardly necessary when Kim’s on stage. Breeders are the Music Press ‘Girls De Jour’, but they don’t really need that either. Kim wears a shapeless blue top and jeans with few concessions to presentation. But for the driving instrumental “Flipside” a jive two-some from support band Luscious Jackson provides ragged choreography. ‘They’re great’ enthuses sister Kelley Deal, ‘they’ll do ANYTHING! There – that’s ruined THEIR reputation!’

The bitching cross-chat is almost as much fun as Kim’s ciggy-juggling. ‘It’s not that I’m playing WRONG’ explains bassist Josephine carefully, ‘it’s just that we’re both playing different SONGS.’ For Aerosmith’s “Lord Of The Thighs” Jo snatches vocals. She ‘oozes it, no, she vocal stylises it’, before she switches to drums for “Roi” which Kim announces as ‘a solo acoustic’ (!). Democratically Kelley also gets to sing “I Just Wanna Get Along”, while even Roadie Simon gets a credit, a nudging piss-take for having his Patsy-Kensit-lookalike girlfriend printed across his T-shirt.

Breeders are (largely) from Dayton, Ohio, although solid drummer Jim MacPherson is from Chicago, and Jo Wiggs from fifteen hours away in Brighton, England. Kim arrives by way of her vital role in the Pixies, with Breeders starting out as a side-project (inaugurated with Tanya Donelly of Throwing Muses) between their ‘Surfer Rosa’ (4AD, March 1988) tour, and the release of ‘Bossanova’ in August 1990. An outlet for Kim’s songs which, largely, Pixies couldn’t find space for. Tonight the Breeders are touring their second album – ‘Last Splash’ (4AD, August 1993), their first with their current line-up.

John Lennon’s “Happiness Is A Warm Gun” is crammed full of unpolished arpeggios at strobe-speed. The twitchy rhythms of “When I Was A Painter” come in hot pursuit. And their Marquis De Sade-inspired single “Cannonball” is threaded on sadistically oscillating guitar figures that chew their way into your head like a particularly vicious hang-over. Breeders are self-contained and ideally gig-friendly. They close with “Lime House”, the penultimate cut from their debut ‘Pod’ (4AD, May 1990) – the Steve Albini-produced album that Kurt Cobain frequently claimed as his favourite all-time vinyl. And between cigarettes, Kim is one hell of a singer.

From first to Last Splash… 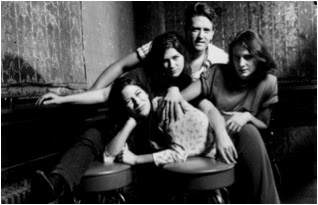