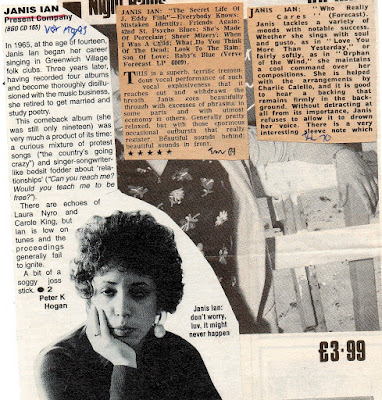 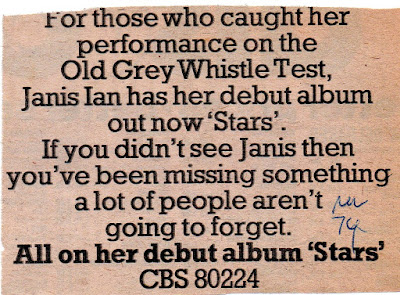 Drew Barrymore. Michael Jackson… Britney Spears. Child protégés have it tough. Janis Ian explains, in a cheek-and-tongue related fashion, ‘just how often I’m compared with Britney Spears’. In response to the ensuing hilarity she concedes ‘it’s an uncanny resemblance, I must admit. I did get a very good review in Maryland recently that compared me quite favourably with Britney’. Janis Ian – neé Janis Eddy Fink, began playing the Greenwich Village Coffee House Folkie circuit at fourteen. A year later she was charting high with her own “Society’s Child”, a bitter emotion-charged interracial love affair torn apart by adult intolerance and hypocrisy. White-girl-meets-black-boy – ‘they call you ‘boy’ instead of your name’, girl-loses-boy, girl-blames-society, all interpreted through one of Shadow Morton’s more sympathetic productions. As she replays it live it’s still a remarkably mature and stunningly powerful song. 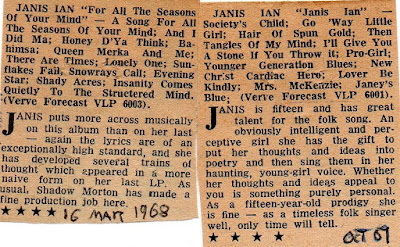 ‘I had my first hit when I was fourteen’ she narrates. Early fame, followed by the come-down, ‘a period of my life where it was pretty dark’ and ‘I’d had to move back in with my Mom. By the time I wrote this next song I was nineteen and in the words of one critic I was a washed-up has-been. I wanna thank him for making me angry enough to just write a truthful song’. That truthful song – “Stars”, the title-song of her 1974 album, tells the pain of early stardom making it almost as relevant, to stretch an analogy, to Britney as it is to Janis Ian. And she was well into her first of many come-backs, in a smoother Joni Mitchell vibe, but still impacting the ills of the world head-on. “This Train Still Runs” becomes a personal metaphor, her ‘baggage weighs a ton’ but ‘I’m not done’. ‘Present Company’ (1971) – her fourth LP, re-visits her early-seventies trauma, while ‘Breaking Silence’ (1993) updates the misery memoirs following a bout of violent marital breakdown and her newly-discovered lesbian self-awareness (she divorced filmmaker Tino Sargo, and subsequently married attorney Patricia Snyder). When someone yells out ‘we love you’ she responds ‘I didn’t spend all that money on therapy to disregard that’. Remarkably precocious and assured from the start, setting her sometimes precious poesy into sparse sensitive shimmers of instrumentation, with elements of confessional therapy giving it all a tense nervy edge, her albums can be unsettling. 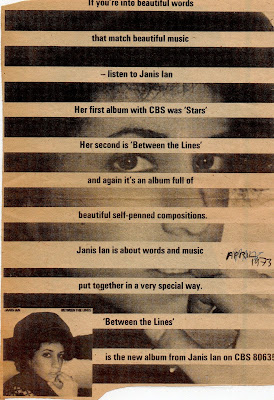 Early titles like “Insanity Comes Quietly To The Structured Mind” and “Forty-Second St Psycho Blues” betray an earnest fragility she’s never quite kicked. She writes tear-jerking self-analysis in the first person, her biggest American hit – “At Seventeen”, is a painfully maudlin paean to acne’d misery, savagely introspective and to be listened to with a tear-absorbant Kleenex handy, about ‘those of us with ravaged faces, lacking in the social graces… inventing lovers on the ‘phone, who call to say come dance with me, and whisper vague obscenities’. She explains how, although the initial spark came from a ‘New York Times’ feature in which a debutante complained how ‘she’d learned the truth at eighteen’ – which didn’t scan so was age-revised down, the confessional song took her three months to write. The adolescent trauma she assumed to be so uniquely isolating went on to touch surprisingly universal sensitivities.

Her songs are diary entries with literary pretentions, one record sleeve frames her alienation through a shattered window against a wedge of books artfully contrived for their intellectual effect – Colin Wilson’s cod-philosophical text on the benefits of isolation ‘The Outsider’, Albert Camus in translation, always a dead give-away, and as a personal reference point, ‘The Greenwich Village Bluebook 1974-75’. 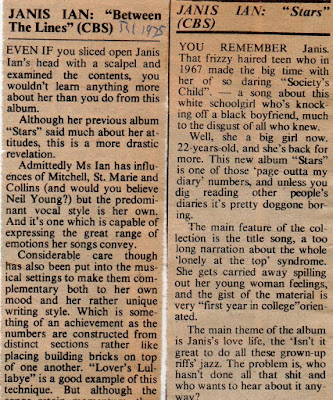 That said, ‘Present Company’ does catch her at something of a melodic low, joyless and humourless, with doses of compensation injected by the near-gutsy drive of “My Lane”, against the attractive “Here In Spain”, “See The River”, and “Can You Reach Me?” (‘…would you teach me to be free?’). ‘Breaking Silence’ is stronger, enveloping her predictable themes of cathartic pain, incest, and doubt in cracked and muted washes of highly personal acoustics with soft jazz touches. Among the titles is “Some People’s Lives” which she originally wrote for Bette Midler, and a wistful “Guess You Had to Be There” looking back at simpler sixties times. 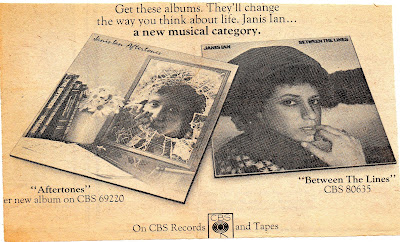 Yet she’s capable of wresting humour from her own persona, chastising her enthusiastic audience ‘this is the Janis Ian show, you’re supposed to be depressed by now’. She throws ‘Purple Haze’ quotes into the complex instrumental work on the ten-minute “Take No Prisoners”. She adds scrabbled guitar-fret effects and ascending harmony-chimes to “Take Me Walking In The Rain”. There’s a Greek Leonard Cohen pacing to “Between The Lines”. And she moves from Joni Mitchell lightness, through falsetto feints, into the jaunty jazzy-jump of “Fly Too High” with punching horns and sax solo, prefacing it with ‘just ‘cos you guys thought we wouldn’t do any old songs’. Dance-miester Giorgio Morodor produced the original version for its inclusion on the soundtrack of the Jodie Foster movie ‘Foxes’ (1980). Then there’s “Cosmopolitan Girl” which even eulogises the benefits of a vibrator. But when she talks about the magic and the alchemy of song, of being born ‘with a talent’ and working ‘both as a woman and an artist’, she’s probably angling more towards the subtle eroticism of “Ride Me Like A Wave”, or the delicate gender-free fragility of the acoustic “Jesse”. From ‘Stars’, Roberta Flack later had a hit with “Jesse”. Janis co-wrote “Berlin” with Pop multi-tasker Linda Perry. 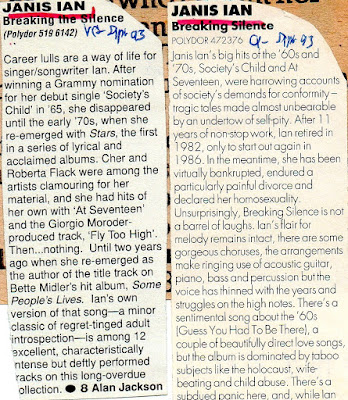 But the harrowing holocaust testament “Tattoo” stands starkly, and touchingly alone. But of course, like the young Drew Barrymore, Michael Jackson… or Britney Spears, the teenage Janis Ian was very much THERE, and it could be argued she’s still working her way through its consequences. ‘Not that I have anything against Britney Spears’ she explains carefully, with calculated pauses for effect. ‘I mean, what’s not to like? She’s young… she’s tall… she’s blonde… and she’s really rich’. Ending with a one-word punchline, ‘slut!’ 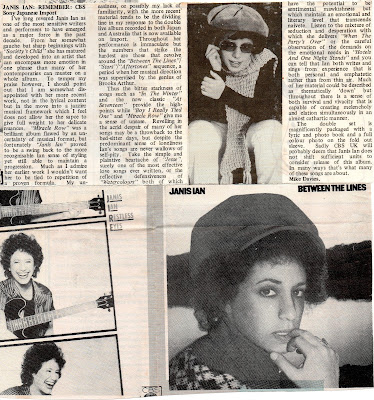 Posted by Andrew Darlington at 16:38