DVD: 'I WALKED WITH A ZOMBIE' 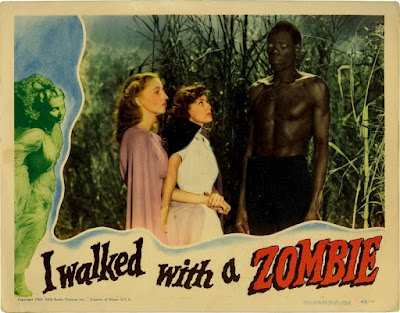 ‘ANY SIMILARITY TO
ACTUAL PERSONS LIVING,
DEAD, OR POSSESSED,
IS PURELY COINCIDENTAL’

‘I walked with a Zombie. It does seem an odd thing to say.
Had anyone said that to me a year ago I’m not at all sure
I would have known what a Zombie was. I might have
some notion that it was strange, and frightening.
Even a little funny…’
(introduction voice-over) 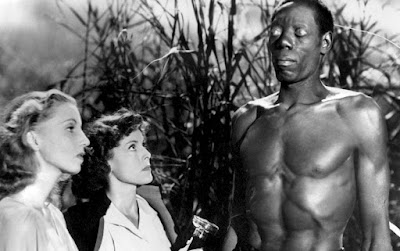 Yes – Zombies, but not as we know them. These are not decomposing flesh-eating ‘Walking Dead’ Zombies. Or brain-munching George A Romero ‘Day Of The Dead’, ‘Dawn Of The Dead’, ‘Land Of The Dead’ Zombies. Or even Will Smith ‘I Am Legend’ Zombies. These are slower, more poetic zombies-as-metaphor. Zombies in the original Voodoo sense of the rich undead mythology. An elegant slow-paced meditation on the state of un-death. After all, they made Horror films differently back in 1943. Today, this might not even qualify for the genre at all. Horror? Where’s the horror…? But it’s there. Even if it works in subtler more insinuating ways.

Frances Dee is a ‘nice level-headed’ girl. Cool and attractive in the way that 1940s movie stars were cool and attractive, prone to wistful longing gazes from liquid eyes. Popular, if never quite part of the Silver Screen’s pantheon of Matinee greats. She first came to attention opposite Maurice Chevalier in the musical ‘Playboy Of Paris’ (1930), then played alongside Bette Davis in W Somerset Maugham’s ‘Of Human Bondage’ (1934), and the western ‘Wells Fargo’ (1937). But there’s no real other horror on her extensive cv.

Her dialogue scenes with Tom Conway are formal and stilted, with the kind of theatrically precise elocution that’s not been heard on screen since, punctuated by lush creakily romantic orchestration. They’re on a ferry from Antigua to Saint Sebastian beneath a cloudy sky. ‘Everything seems beautiful because you don’t understand’ he chastises her. ‘There’s no beauty here, only death and decay… everything good dies here, even the stars.’ With immaculate timing she gazes up at an abruptly clear sky to see a shooting star falling to its death. With his pencil-thin moustache reinforcing the ‘cruelty and hardness’ in his voice, Conway is ‘strong, silent, and very sad.’ As an MGM contract player he’d just commenced a run of ten movies as the suave gentleman-detective ‘The Falcon’, and would later replace Basil Rathbone as radio’s ‘Sherlock Holmes’. But first, this was his third Horror outing for Val Lewton, following the much-respected ‘Cat People’ (1942) and ‘The Seventh Victim’ (1943). It was also the second of three Lewton collaborations with director Jacques Tourneur – along with ‘Cat People’ and ‘The Leopard Man’ (1943). Lewton would go on to make a series of low-budget RKO horror movies, while – among Tourneur’s diverse output, he created the classic ‘Night Of The Demon’ (1957).

Onscreen here, Tom Conway is ‘Paul Holland’, troubled owner of a West Indies sugar plantation. Frances Dee is ‘Betsy Connell’, recruited in Ottawa for the $200-a-month position as nurse for Holland’s wife, Jessica. Unthrown by the interview question ‘do you believe in witchcraft?’, Betsy notes the Canadian snowstorm outside the window, and takes the job. She arrives at the ‘strangely dreamlike’ Fort Holland house with its figurehead of the saint after which the island is named – pierced by martyr’s arrows as in the Derek Jarman ‘Sebastiane’ (1976) film. Taken from the slave-ship that ‘brought the coloured folks to the island’ the figurehead has been placed in the garden, as a reminder of the sad legacy of that history, what Holland terms ‘the glitter of putrescence’ threading the story. 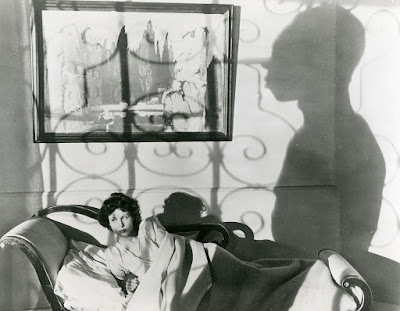 If the overwrought literary voice-over recalls Hitchcock’s gothic ‘Rebecca’ (1940), the plot consciously steals from Charlotte Brontë’s ‘Jane Eyre’ (1847), in which the brooding tragic Rochester has a mad wife locked in the attic. Although charming half-brother Wesley (James Ellison) befriends her, Betsy is strongly attracted to Conway’s English-educated Paul – ‘quite the Byronic character’, who is abrupt and taunting. Words are his weapon, as other men use their fists. But she senses his inner hurt. During her first night on the island Betsy hears sobbing, and glimpses through the blinds a figure in white moving through the night garden, and follows her through dark shadows. In a shock-horror confrontation, she learns this is Paul’s wife, Jessica (Christine Gordon), a woman without will-power, a sleepwalker who can never be wakened. ‘She makes a beautiful zombie’ quips the Doctor.

An overheard calypso tells the back-story as she and Wesley sit at a café table. How Jessica was ‘burned in the fever flame’ (it’s interesting that the song, written and performed in the film by Sir Lancelot, was adapted into “Shame And Scandal In The Family” – a no.37 hit for comedian Lance Percival in October 1965!). But herein lies the film’s central ambiguity. Is Jessica ‘a mental case’ who should be shipped off to the asylum? Can she be cured by shock-treatment? Wesley even says she’d be better if Betsy administered a mercy-killing. Or – ‘there are other doctors’ suggests black maid Alma (Theresa Harris), implying that Jessica is the victim of Voodoo, of the overheard ‘mysterious eerie’ jungle-drums. Betsy is sufficiently persuaded to follow Alma’s directions and secretly takes Jessica out to seek the Houngan, the Voodoo priest.

Voodoo is the origin of the zombie myth, although that connection has long since lost its currency. Although it absorbed elements of imposed Christianity, Voodoo was the slave-religion of the Afro-American diaspora, a defiant subversion through which the displaced black population of the Caribbean maintained their connection to surviving strands of their African tribal origins. From Haiti to New Orleans it developed different, but related, strands through periods of suppression and demonization. Yet its presence remains as a belief-system with a powerful psychological undertow, its rituals even portrayed outside the Horror genre in James Bond’s ‘Live And Let Die’ (1973).

Hugh Lamb, writing in ‘The Penguin Encyclopedia Of Horror And The Supernatural’ (1986, edited by Jack Sullivan), points out that unlike Dracula, Frankenstein and the rest of the grisly crew, Zombies have no real origins in literature. Zombie conventions were instead picked up and developed largely through films – first by director Victor Hugo Halperin in ‘White Zombie’ (1932) in which Bela Lugosi revives corpses to work on his plantation. The film established many of the blank-eyed stares and Voodoo drums conventions that defined the undead for its follow-up ‘Revolt Of The Zombies’ (1936). Turned to comic effect by Bob Hope in ‘The Ghost Breakers’ (1940), the lumbering Zombie menacing him and the lovely Paulette Goddard nevertheless replicates this pattern. Until what Lamb calls ‘one of the most atmospheric of all zombie films… one of the best and the only film to date to portray a zombie we actually care about.’ In ‘I Walked With A Zombie’ ‘the lurching monster theme was eschewed in favour of a creepy tale of possession.’

And yes, the film works largely through suggestion, with ‘the glitter of putrescence’ in the guilty legacy of the island’s brutal history. There’s haunting wind sighing through tall cane vegetation on the spooky way to the crossroads, an animal skull, a stripped animal corpse suspended from a tree, a human skull in a circle of stones, and the scary bug-eyed Carre-Four (Darby Jones), all set to the intensifying throb of tribal drums. The two women are drawn into the ritual, which takes the form of energetically frenzied chant-driven dancing. But behind the mandala door Betsy finds – Mrs Rand (Edith Barrett), mother of the two feuding half-brothers! Further muddling the message, she admits to utilising the mythic autosuggestion power of Voodoo to benefit the superstitious locals.

More revelations follow. She reveals the truth behind Sir Lancelot’s calypso, that when Jessica and Wesley had an affair that threatened to destroy the family, she’d called upon the Houngan’s help. So that when tropical fever left Jessica ‘dead, living and dead’, Mrs Rand felt guiltily responsible for her zombie-like trance state. The ambiguity is left open. Supernatural powers, or merely belief in supernatural powers? Back at the house there’s a shuffling figure in the night. An owl. Then a visit from the tranced-out Carre-Four. While the ritual continues. As the dancers draw a voodoo-doll, Jessica responds. Wesley opens the gate so she can wander off into the night. With fatalistic resignation he extracts an arrow from the garden figurehead, and follows her down to the beach. As the voodoo doll is pierced, he stabs her with the arrow and carries her body down into the surf, where Carre-Four waits.

They made Horror films differently back in 1943. No decomposing flesh-eating brain-munching zombies. All of that had to wait until Hammer revived and reimagined the genre with John Gilling’s ‘Plague Of The Zombies’ (1966) with monsters more grotesquely recognizable to modern audiences. Jacques Tourneur is more subtle, more insinuating. Balancing the clinical against the psychological. But ironically, while it was Wesley Rand cast as the half-brother with the drink problem, it was Tom Conway who was destined to die of alcohol-induced cirrhosis of the liver, aged sixty-two in 1967.


‘A CHILL-FILLED
FESTIVAL OF HORROR’ 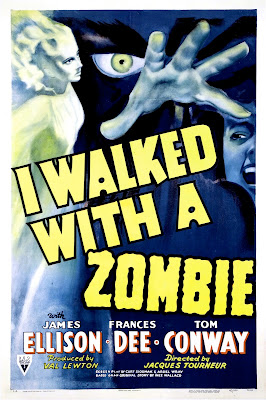 Posted by Andrew Darlington at 10:55