THE BEACH BOYS: ONE ENDLESS SUMMER 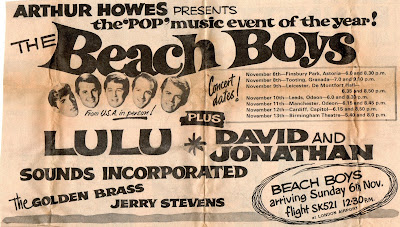 I saw Lulu live at the Leeds Odeon late 1966 supporting the Beach Boys. She drops an ear-ring in mid-“Shout”, turns her back on the audience and stoops to retrieve it, gifting the first four rows a revealing flash of her knickers – a memory I carry with me today as she’s doing “Shout” yet again on ‘TOTP2’. The tour billed as the ‘Pop Music Event Of The Year’ had opened with the Golden Brass, introduced by jovial host Jerry Stevens. Sounds Incorporated play an energetic set, before David & Jonathan take it to the intermission. The songwriter duo had broken through with a cover of “Michelle” from ‘Rubber Soul’ (December 1965), but took it even higher with their own “Lovers Of The World Unite”. Then it’s Lulu… and the headlining Beach Boys. 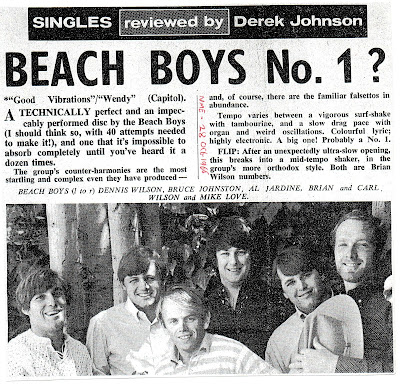 The Beach Boys are so tight and exciting, despite the short-sleeve vertical-striped shirts and white slacks. Newly-bearded Mike Love does the stage links, and clumsily acts out the lyrics – the ‘got into a fight’ in “Sloop John B”. Brian Wilson has been replaced by Bruce Johnston (‘I Guess He Just Wasn’t Made For These Times’), which is disappointing, but it still works, even down to performing a note-perfect stage replication of the labyrinthine “Good Vibrations”. So good that I stay on, miss the last train home and spend hours walking the city centre, the harmonies echoing inside my head. I wind up crashing overnight with an Irish immigrant worker with a mangy kitten that craps all over the carpet at 02:17am while the shimmering chimes of “Good Vibrations” are still ringing like the lure of endless tomorrows in my head… 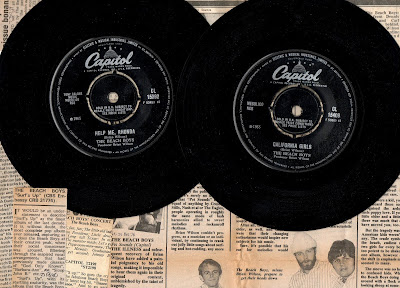 Chances are you know all the songs on their DVD ‘Made In The USA’ (2007 – 103 minutes – Liberation Entertainment LIB6046) – “Be True To Your School”, “Help Me Rhonda”, “California Girls” (as done on a US TV-show sketch, interrupted by surfer comedy from Bob Hope and George Burns), the later “Rock & Roll Music”, and more. For each new Beach Boys ‘Greatest Hits’ album is a re-shuffle of your own personal history. These are some of mine. I tried losing my cherry to the blissful harmonies of ‘Pet Sounds’ (“God Only Knows”, “Caroline No”) which I judged the perfect seduction atmospherics, she later confessed she’d quite enjoyed the fumbled sex but found the music ‘distracting’. There used to be a covers-band called Tony Rivers & The Castaways who’s set consisted entirely of xerox Beach Boys, they did a pretty tidy “Sloop John B” the night me and a friend got off with some convent girls and managed to kiss them off at the gates while Nuns hover in the background like predatory penguins. 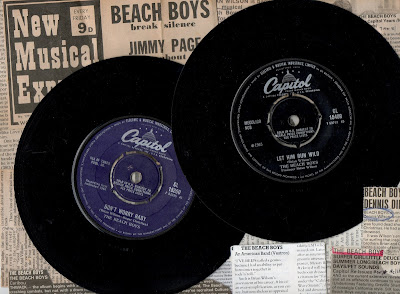 I first heard “Don’t Worry Baby” on a big chrome Rockolla juke-box in an Expresso bar on a rain-stopped-play Blackpool coach-trip… The first motorbike I ever owned – a Honda 205cc, was a choice directly influenced by the Beach Boys track “Little Honda”, a piece of catchy product-placement that earned the group a set of freebie mini-mokes from a grateful Honda Corps… There’s a story about Jan & Dean snarled up on the ninety-seventh abysmal take of an aborted next single, and ‘taking five’ Dean Torrence strolls into the adjoining studio where his old friends are cutting their ‘Beach Boys Party’ (November 1965) album, he grabs co-vocals on a raggedy one-take jam around the Regents’ “Barbara Ann”, then goes back for more attempts at their own record. “Barbara Ann” goes no.1 worldwide – and later even turns up as a chocolate-biscuit TV-ad. But whatever happened to that Jan & Dean 45rpm…? 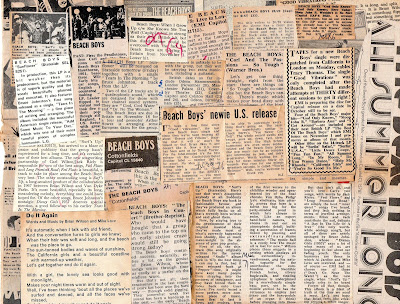 The interviews on the DVD tactfully skirt around the psychological damage inflicted on the young Wilson brothers by father Murray, and falls short of the later tragedies that inflicted the group. The Beach Boys weren’t the first surf band, but they did lift surf-music out of cultdom and take its appeal to landlocked teens in the mid-west, in New York, and even as far away as Hull. And although they mature their themes into other areas, the beach continuity stays there through to “Do It Again”, “Surf’s Up” or “Don’t Go Near The Water”. Influences? Brian suggests Chuck Berry, and the Four Freshmen. Diametrically opposed artists who nevertheless demonstrably fuel what followed. “Surfin’ USA” lifts its tune intact from Chuck’s “Sweet Little Sixteen”, and “Fun Fun Fun” opens with a perfectly Berry-esque guitar-run. While “Please Let Me Wonder” and “In My Room” tie it all in with immaculate Freshmen-pure harmonies. In fact the voices weave so beautifully you almost miss the lyric-point of “In My Room” which is as introspective-dark as anything the Smiths ever did. 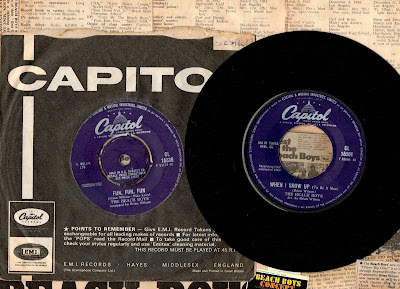 But memories, and ‘Endless Summer Greatest Hits’ albums tell lies. Relatively late, “I Get Around” was the first UK Beach Boys single to become a hit. It peaked at no.7, 27 August 1964. Above it was (no.1) “Have I The Right” by the Honeycombs, (no.2) “Do Wah Diddy Diddy” by Manfred Mann, (no.3) “I Won’t Forget You” by Jim Reeves, (no.4) “You Really Got Me” by the Kinks, (no.5) “A Hard Day’s Night” by the Beatles, and (no.6) “Tobacco Road” by the Nashville Teens. In other words, all those records sold more copies than “I Get Around” at the week of the peak of its sales. “Surfin’ USA” had only crawled as high as no.34 a year earlier (15 August 1963). But all of the American hits between the two had totally failed to register. Even the mighty “Fun Fun Fun” gets zero chart action. Unfortunate timing maybe, UK Pop was obsessed with UK beat groups. US Pop was temporarily out of the loop. 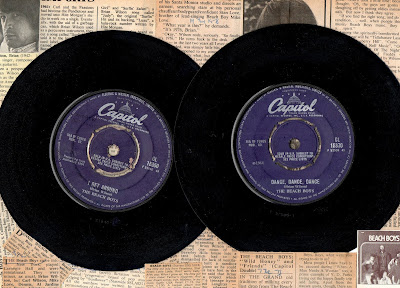 Yet “I Get Around” is such immaculately concocted Pop. The harmony arrangement deceives the ear. For the lyric is masterfully minimal. Each verse consists of a single statement, plus a qualifying statement. Sharp precise lines, but how rifted image-heavy with meaning! ‘I’m getting’ bugged driving up and down this same old strip’ is amplified by ‘I gotta finda new place where the kids are hip.’ Tightly sketched slang-poetry, but the most exact phrasing. Bored, with the itch to go. Rooted in California, but with a restless need for movement that’s Teen-global. Then ‘my buddies and me are getting real well known’ is qualified by ‘the bad guys know us and they leave us alone.’ They’re the good guys, but as tough as the bad guys. They’re a gang, a group so hip and so cool they’re even respected by the ‘bad guys’, and isn’t that what adolescent status has always been about? From doo-wop groups hanging out around the stoops, to Mods on formation Lambretta’s, to Punks swaggering through the precinct, to Hip-Hop on the block. It touches the right nerve. It says it all. Speed. Movement. Adventure. No syllable wasted. I was snared. I was sold on it. 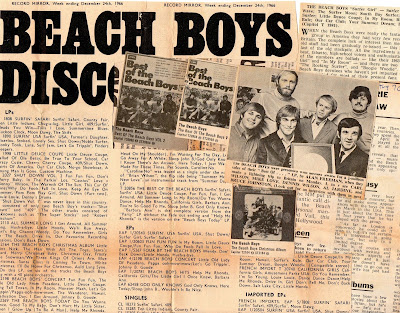 Yet the hits that follow didn’t do too much better, “When I Grow Up (To Be A Man)” no.27, “Dance Dance Dance” no.24, “Help Me Rhonda” no.27, and “California Girls” no.26. Before “Barbara Ann” finally elevates them into the Top Three. In 1965 the Beach Boys turn in a sloppy performance of “Dance Dance Dance” on a monochrome ‘Ready Steady Go’ show (now available as part of a Dave Clark owned DVD series), with its irresistible punch-line – ‘after six hours of school, I’ve had enough for today, I hit the radio dial and turn it up ALL THE WAY’ – which still has the contagious power to ignite the drabness with its undiluted adolescent energy-charge… 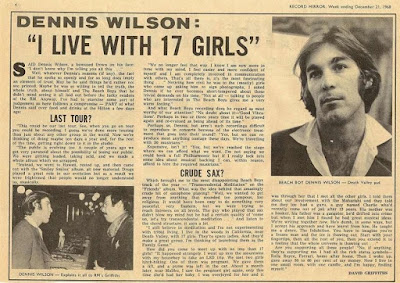 By 1966, when I see the Beach Boys in Europe for their “Good Vibrations” tour promoted by Arthur Howes, they were at their most fashionable. Derek Taylor – former Beatles PR, calls them ‘Maverick Millionaires’ when he writes the programme. The balding Beach Boy caricatures who play the first ‘Live Aid’, complete with their Ronald Reagan Presidential-endorsement as a star-spangled ‘All-American Band’, does such flashbacks a disservice, even though their then-current single of John Philips’ exquisite “California Dreamin’” (embroidered by Roger McGuin’s spacily fragmented Byrds twelve-string) is still capable of raising the hairs along the back neckline of your T-shirt… 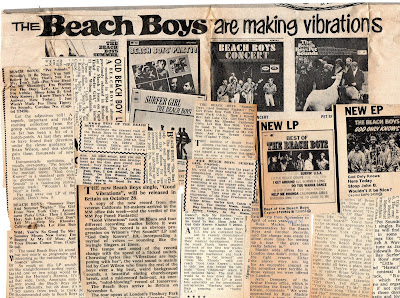 “Good Vibrations” later became a single for Psychic TV, and the Leeds Odeon is now a Primark… There’s a wealth of rare promo-TV clips on the DVD too, salvaged interviews, and even previously-unseen studio footage – including Brian singing “Surf’s Up” alone with just his piano... I pay £100 for tickets to see Brian’s ‘Smile’ solo-tour in Manchester – some forty years after that original Leeds Odeon memory, and instead – on the evening, wound up in A&E for peritonitis and a gall-bladder extraction. I still have the unused tickets… But above and beyond it all, the music remains superb. All you have to do is add your own memories… 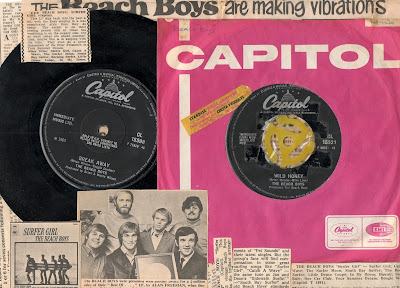