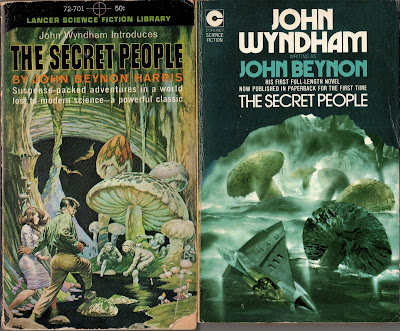 The quirks of literary fashion are curious beasts indeed, witness Dan Brown, JK Rowling, and the ‘Fifty Shades Of Grey’ blip. Back in the 1950s Science Fiction was ‘that comic-book stuff’, regarded by the self-appointed critical guardians of proper literature with a sometimes deserved derision. Until the two legitimising escape clauses, admitted into the elevated status of respectability, Aldous Huxley’s ‘Brave New World’ (1932) and George Orwell’s ‘1984’ (1949) were grudgingly joined by a third. For it’s curious that once John Wyndham’s books were published within those distinctive orange Penguin covers they became the fashionable face of SF, the seriously reviewed acceptable chic SF, elevated into ‘the Wells tradition’. With the success of ‘The Day Of The Triffids’ (1951) and ‘The Kraken Wakes’ (1953) John Wyndham achieved a quirk of literary fashion. 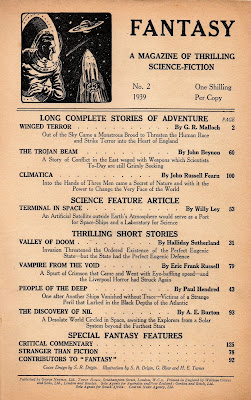 Although he’d actually been around quite a while. Those same readers who saw fit to add a little daring to their Lit-approved book-shelves, were unaware that Wyndham, behind a spread of aliases taking advantage of his wealth of forenames, had been one of the British-invasion writers, along with William F Temple, Eric Frank Russell and John Russell Fearn during Pulps most extravagant years. His first sale, “Worlds To Barter”, appeared in ‘Wonder Stories’ as long ago as 1931. It was followed by “The Lost Machine” – as by John Beynon Harris, in ‘Amazing Stories’ (April 1932), in which Zat, a stranded coffin-shaped Martian robot on crab-legs, strives to make sense of these ‘animal structures’ of Earth. It attempts to talk to a stalled car, ‘I was lost – the only one of my kind upon this primitive world… an intelligent machine in a world of madness.’ Mixing comic satire about drunken human behaviour with the poignancy of Zat’s final self-termination, the tale’s clumsy energy is matched by “The Man From Beyond” (‘Wonder Stories’, September 1934) – also told in flashback, in which Morgan Grantz revenges himself on the International Chemicals corporation by sabotaging their ‘Nuntia’ expedition to Venus, but in doing so maroons himself in the ‘Takon’ Valley of Dur where toxic gases place him in a form of suspended animation, revived by the six-limbed Venusian Takonians at a time when Earth has blown itself into ‘a celestial cinder’. And then there’s “Perfect Creature” (‘Tales Of Wonder’, 1937) taking an absurdist nod at HG Wells ‘The Island Of Doctor Moreau’ as well as Mary Shelley, when Una, a hideously monstrous creation animated by Doctor Dixon at Membury Grange abducts the Society For The Maltreatment Of Animals inspector – Alfred Weston, with amorously reproductive intentions!

Written with more fanciful enthusiasm than technique, ‘The Secret People’, Wyndham’s first novel, is a thrill-a-minute adventure of the same dubious vintage. But following his mainstream breakthrough Lancer Books fortuitously rediscover this modest debut – published in 1935 under the cunning guise of John Beynon Harris. For its republication, Wyndham made a few minor amends to the text, and adds an amused introduction, writing about ‘Beynon’ in the third person, justifying the title-blurb ‘John Wyndham introduces…’ 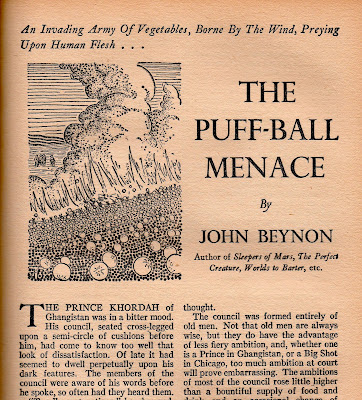 Here, dashing young Mark Sunnet is a playboy whose entrepreneurial obstinacy has turned around the declining fortunes of his uncle’s shoe business. He rewards himself with ‘Sun Bird’ – a silver ‘compact little bundle of power’ rocket-plane in which he plans to visit a friend who’s farming in ‘Southern Rhodesia’. As Margaret Lawn is a red-headed mistress of her own destiny, who anticipates meeting an acceptable ‘play-mate’. The two link up during a stop-over at the Hõtel de L’Etoile in Algiers, to which he’s been misdirected by a taxi driver.

‘You’re lovely’ Mark tells Margaret, ‘and you’re a brick.’ They take a flip in the ‘Sun Bird’ over the ‘New Sea’, a project first proposed in the nineteenth-century by the French-born architect of the Suez Canal, Ferdinand de Lesseps, and discussed in a ‘New York Times’ feature dated 16 September 1877. Wyndham adopts the idea, and develops it into a near-future reality, a vast desert irrigation scheme funded by a consortium of north African states, at the Gulf of Qabés, taking in parts of Southern Tunisia and a series of lakes – or ‘Shotts’, in Algeria. So that when the rocket-plane crashes, the couple find themselves in the bizarrely surreal crisis of being shipwrecked in the middle of the Sahara! They pick up a cat they name ‘Bast’ on a diminishing island, only for their craft to get trapped in a sudden whirlpool that draws them down into an underground cave system. 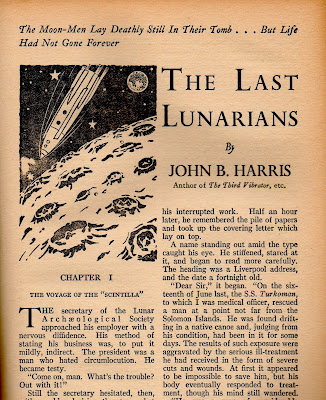 Washed up in an artificially-illuminated cavern they enter a weird mushroom forest. To discover they’ve stumbled into a subterranean realm, with its pygmy inhabitants, threatened by inundation by the expanding New Sea above them. ‘Do you know what it reminds me of?’ says Margaret. ‘Pictures in story books when I was a kid – only this technique’s more modern. Enormous toadstools under which gnomes lived. There was one just like that in one book… but I never thought I should see the real thing.’

The ‘Lost Race’ or ‘Hidden People’ idea was an already familiar fantasy sub-genre, at least since Jules Verne’s ‘Journey To The Centre Of The Earth’ (1864, and 1971 in English). But even before him, as early as 1818, John Cleves Symmes had propounded a fanciful concept of polar openings leading to a succession of inner worlds, leading to Edgar Allan Poe making use of the idea in “Ms Found In A Bottle” (1833) and “The Unparalleled Adventure Of One Hans Pfaal” (1835). Then both William N Harben’s ‘The Land Of The Changing Sun’ (1904) and Willis George Emerson’s ‘The Smoky God’ (1908) use subterranean settings. Stanton A Coblentz’s ‘Hidden World’ (1957) – originally serialised in ‘Wonder Stories’ (Mar, April and May 1935) as “In Caverns Below” features the accidental discovery of the underground civilisations of Wu and Zun beneath Nevada. While Richard Sharpe Shaver created ‘The Shaver Mystery’ cult sequence of stories – commencing with “I Remember Lemuria” (‘Amazing Stories’ March 1945), as purportedly ‘thought records’ of ancient civilisations using fantastic technologies in caverns beneath the Earth’s surface. But the sub-genre probably reached its apotheosis with Edgar Rice Burroughs’ ‘Pellicidar’ tales set at the centre of a hollow Earth, the first being ‘At The Earth’s Core’ (1914).

The highly excitable blurb to the Lancer edition of ‘The Secret People’, ‘Rocket To The Earth’s Core’ seems to inaccurately imply such an ERB comparison. ‘It was an ultra-scientific machine – but it plunged Mark and Margaret into the weirdest of primitive worlds… a land beneath the Earth’s surface and forgotten by time.’ Wyndham’s working title – ‘Sub-Sahara’, had been discarded by the publisher, who were equally dubious about the viability of his futuristic rocket-plane, but were grudgingly persuaded to go along with it. The story was published in serial-form in the weekly tabloid ‘The Passing Show’ (20 July to 14 September 1935), amid a mix of mystery, adventure-fiction, anecdotes and cartoons, where it was illustrated by Fortunino Matania ‘a man with a grand-opera approach to story illustration’ according to Wyndham. Later, for a one-off reprint in ‘Famous Fantastic Mysteries’ (April 1950) it came with art by the wonderful Virgil Finlay. 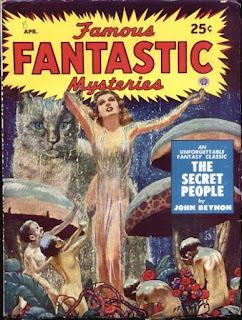 Subterranean life in the system of linked caves, corridors and caverns – illuminated by ancient Cold Light technology, is lengthily detailed, with Mark confined with others who had wandered by various routes from the surface to be apprehended, some for many years, with ‘native’ children born in the caves knowing no other existence. Factions scheme against each other, with a secretive escape tunnel project that has been underway for years. And devious gangster Manuel who tries to intercede with their pygmy captors in order to gain personal advantage.

There’s a carved pantheon of gods, ‘like and yet unlike their Egyptian counterparts’ which offer clues to the origins of these ‘secret people’. There’s an over-long theoretical history of the troglodyte’s origins – which includes a brush with Piltdown Man! Simpler surely to suggest that the creeping desertification that followed the last receding Ice Age, resulted in migration east towards the Nile valley, while a remnant population sought subterranean refuge? But Wyndham seems determined to draw Central African pygmy tribes into his scheme too. Perhaps their mournful melancholy expressions were based on photographs he’d genuinely seen in some geographical magazine, or – like Mark, ‘a travel film’, which left an enduring impression on him? A doomed race caught up in the modern world’s inexorable conquest. For the battle beneath the Sahara, as Mark shrewdly observes, is a war for the very survival of their realm too.

Because Mark arrives in time for the triggered confrontation between pygmy captors and prisoners, who barricade their caves with immense ramparts of felled mushroom stalks. A prison within a prison, in which the rebels are besieged. Beside him there’s American action-man John Smith, with leadership charisma. Mahmud el Jizzah, and skilled African carver Zickle. While, a dialogue with thoughtful English archaeologist Charles Gordon, takes a right-wing slant when Gordon argues that democracy, Socialism and Communism are not evidence of the triumph of reason, but simply modern religions. As Mark argues back, Gordon insists that the ‘fantastic idea that all men are equal’ is not logical, and that laws based on ‘Lower Common Denominator force brilliant intellects to abide by them.’ That even preserving the weak and unfit is not rational. The reader assumes this to be Wyndham’s ventriloquism, opinions assumed to provoke debate? What Wyndham himself self-deprecatingly terms ‘indications of the author’s later style… notably the character’s propensity towards continual chatter.’

Margaret meanwhile – as accidental handmaiden of sacred Bast, has put her time to more constructive use by learning the pygmy language sufficient for conversations with wise old Garm. While meeting, and deflecting the ruthless intentions of Miguel, who then murders Garm. There’s some gratuitously nasty torture when Manuel kidnaps Margaret in order to force her to reveal the location of the ‘Sun Bird’, even as the prisoner’s escape tunnel inadvertently punches a hole in the bed of the New Sea and so begins to flood the entire Secret Realm. Bast – the cat, survives Miguel’s vindictive cruelty to join the reunited lovers and their friends. First using the part-wrecked ‘Sun Bird’, and then climbing vents and shafts, to escape the doomed subterranean world with the Cold Light secret that will make their fortune… and a wedding to bring the novel to a suitably romantic close.

According to Damon Knight, after his war service, John Wyndham ‘in 1949 broke a bottle over his bows… and started in afresh’ (‘In Search Of Wonder’, 1956), evolving from such early playful extravagances to fine-tune ‘that astonishing, compelling gift of pure story-telling.’ Leaving ‘The Secret People’ as what Wyndham himself terms ‘this slightly period piece.’ 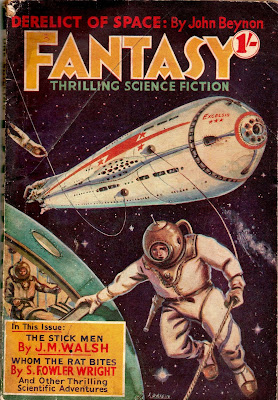 Posted by Andrew Darlington at 16:50