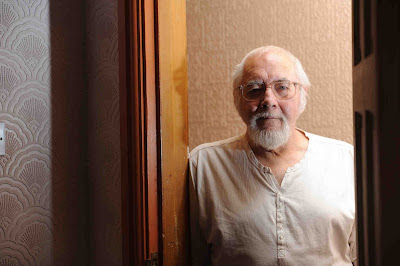 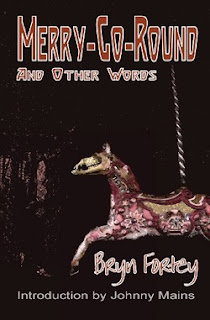 ‘Cut me and I would bleed, not blood
but the flowing patterns of unborn galaxies’
(“Satellite L’Amour”, Bryn Fortey 1997)

Bryn Fortey is one of the good guys. His story “Ithica Or Bust” is an extravagant absurdist reimagining of the Homeric epic transfigured into a ludicrous galactic quest, with a two-headed eight-limbed Odysseus warp-driving through non-space, meeting Dodos and polite dinosaurs. I know the Greek island of Ithica. It is nothing like this. He describes it as ‘my comeback story after a period out of the loop, and the most light-hearted story I’ve written’ (it first appeared in ‘The Alchemy Press Book Of Ancient Wonders’, September 2012). Yet it’s just one of a startlingly original spread of profoundly imaginative tales densely packed into ‘Merry-Go-Round And Other Words’, which amazingly constitutes Bryn’s debut full-length fiction collection.

He knows all about the vagaries and pratfalls of publishing. He’s been around long enough to have been there and done it. But he’s always written on a sufficiently spaced basis that the urgency of deadlines seldom interferes with the work. He writes a tale as and when the idea and the inclination arrives and demands ‘Write me, you bastard!’ It’s only later he sets to thinking of an appropriate home for it. Kenneth Bulmer, editing ‘New Writings In SF No.28’ (July 1976) adds a personal note ‘that almost all Bryn Fortey has to say about editors is just about ninety-nine percent accurate.’

The Bryn story Bulmer was in the process of accepting – “Wordsmith”, is about a bitter resentful self-regarding unpublished writer, his craft itself outmoded by ‘thoughts extracted’ via ‘micronic impulse absorbers’. ‘He submitted manuscripts by both post and email, pestered publishers, wrote bitchy letters to the press, and achieved nothing but sweet zero. Most publishers hated him and very few would even read his submissions before rejecting.’ And while Bulmer approvingly notes that Bryn’s observations about editors are accurate ‘if not in this world then in the one he posits here’, he ‘deals much more directly with the writer’s problems.’ There’s a story within the story – the one that the fictional Piller Presavorrat is writing about ‘The Man With No Face’, a postmodern structure in its self-awareness and deconstruction of its plot-motivations. While the full narrative also ‘introduces, among other delicacies, the extravagant and intoxicating notion of Black Art, the Stealer of Dreams’, who emerges from his fictional reality. 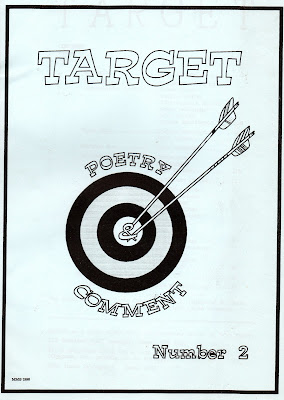 The final irony is that when, finally driven insane by this inhabitant of his own dark imaginings, Presavorrat’s resulting ‘thought extraction’ will provide his elusive literary breakthrough. But the fact-fiction interactivity is not yet exhausted. In his ‘Afterword’ Bryn explains how even the character-name is a kind of in-joke, a Latin mangling of Robert Holdstock, a writer Bulmer had also selected for the same ‘New Writings’ edition. Holdstock is credited with an initial collaboration of another story, “Remnants”, although the connection lapsed and it wound up as Bryn’s own.

Born 27 August 1937, Bryn recalls that ‘the very first book I can remember reading was about intrepid Earthmen discovering and combating a race of Moon beings living beneath the surface of our satellite. The title, author and conclusion are lost in the mists of time, but it did help shape a lifetime’s interest in what we now term speculative fiction.’ As a result, he was active in SF-fandom since the 1960’s, reviewing novels by Samuel R Delany, Philip Josè Farmer and Philip K Dick for the BSFA-magazine ‘Vector’ as early as 1967. He writes amusingly of watching Michael Moorcock’s chaotic ‘New Wave’ lecture at an annual Easter SF Convention in Bristol, then meeting Christopher Priest and observing Brian Aldiss at the following year’s event. He took the opportunity of tracking down editor Kyril Bonfigolio in Oxford, who feared that Bryn had come to hit him in retaliation for a series of encouraging rejections from ‘Science Fantasy’ magazine. ‘Things were sometimes complicated’ Bryn recalls, ‘but never dull.’

He was working within the steel industry in Newport, south Wales, so as for where his stories come from, as well as the more obvious influences – Kurt Vonnegut, JG Ballard and Priest, he lists ‘Beat’ writers Jack Kerouac and William Burroughs, as well as a plethora of Jazz and Blues musicians who also vitally input into his creative continuum. He concedes ‘I was never prolific/ as a writer/ but I would devour books/ like a starving man.’ And the free-flowing Bop prosidy spontaneity and directness of those influences is ever-present. When he writes of having hit a new prose-vein as being ‘golden highways popped in his minds-eye’ he’s drawing on the prose-freedom of the Beats.

He sold his first story – “A Saleable Commodity” (to ‘International Storyteller’ magazine in 1969), but it was not genre fiction. He writes as he writes. His favourite genre, he says, is ‘quirky’. It sometimes seems that new writers are handed an early get-out-of-prison-free card, and he made a series of strategic sales to David A Sutton’s ‘New Writings In Horror And The Supernatural’ paperback series – “Prison” in No.1 (1971), and “Shrewhampton NE” in No.2 (1972). The latter picked up by Mary Danby for her acclaimed ‘The 15th Fontana Book Of Great Horror Stories’ in 1982. The story takes the form of a strangely-strange but oddly normal meticulously-detailed 1950’s train-journey seen through the eyes of an inquisitive boy, as their journey takes them through a kind of limbo, into a purgatory waiting room in an escape-proof British Rail station. It resembles a black-and-white low-budget episode from ‘Twilight Zone’, its extreme mundanity only gradually tipping over into the politely macabre.

His affinity with social outsiders forms the core of “Prison”, in which a gang of misfits led by alpha-male Watko squat in a derelict fairground. The horror element – drawing a lonely old man into the group only to slaughter him in a Coconut Shy ritual, is almost secondary to the dialogue delineating the group’s shifting inner politics, its guilt and jealousy sketched in with considerable insight. It’s not time specific. They could be 1950’s Angry Young Man existential rebels, or 1960’s counterculture drop-outs, or perhaps the vampire hoodlum-teens of ‘The Lost Boys’ (1987) movie – the hunchback Renfrew even seems like a play of Bram Stoker’s ‘Renfield’. Yet their ‘prison’ is their internalised alienation. 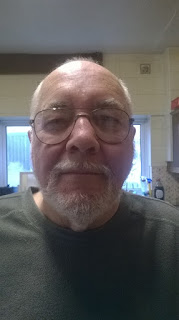 Once established, the association with Danby led to further inclusions in her anthologies, including “The Substitute” (in ‘Frighteners 2’, 1976) – a twist on the Walter Mitty/Billy Liar theme with Lackadaisical Macey swamped by his own fantasy-continuum, and the title-story of Bryn’s “Merry-Go-Round” in her ‘The 12th Fontana Book Of Great Horror Stories’ (1979). Here, the protagonist is drawn into a brutal murder plot, which rebounds when he’s betrayed by the woman he’s supposedly doing the killing for, only to be then tipped over into a bizarre ‘Groundhog Day’ retribution in which he’s doomed to repeat the murders in a time-loop forever. But there were false starts too. The original prototype of “The Oscar Project” – a clever time-travel plot with a religious-satire sting written with Jack Marsh, was sold to ‘SF Monthly’, but the lavish monthly magazine folded before publishing the story. The carbon-copy manuscript languished unseen for decades, before being extensively revised for its eventual debut in this collection.

There are poems too, ‘concocting letters to his own patterns and designs’, words ‘all dragged with blood and sweat from his own mind’. “A Taxi Driver On Mars” is a narrative fingernail in its own right, a character sketch and an outline future-history. Elsewhere, he published his own A4-size magazine, ‘Target’ (1996), theming an impressive range of material around Bryn’s preoccupations with Beat, BeBop and the fantastic realms of the imagination, following it with some ten issues of the A5 ‘Outlaw’ magazine (2002-2005, no.6 a Jazz Special). He editorialised that ‘the most exciting poetry being written today is often to be found in small-press magazines, chapbooks and pamphlets, or heard live at readings. Many of these poets are happy to operate outside the protection of the literary establishment. These are the poetry outlaws…’, he published American writers AD Winans and Gerald Nicosia, as well as Jim Burns, Chris Torrance, Sheila Badham, Geoff Williams… and me. 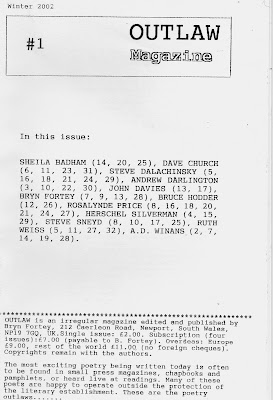 His own verse-collections ‘Rebel Head’ (with John Light, 2000, Forty Winks Press) or ‘Never Get Out Of These Blues Alive’ (Sad Face Press), plus poems scattered around small-press constellations of magazines – ‘Global Tapestry’, ‘Read The Music’, ‘Canine Teeth’, ‘Black Rose’ (“Memories Of Bird”) and beyond, never fail to impress. Tightly constructed, with no words wasted. Hymning the likes of “Charley Patton: Father Of The Delta Blues”, Howlin’ Wolf – ‘an indestructible force’, John Lee Hooker, “The Death Of Blind Lemon Jefferson”, and a poignant “Honky Tonk” (‘the radio was playing the/ Mead Lux Lewis 1936 version/ of Honky Tonk Train Blues/ when I came across your/ long forgotten photograph…’). As a fictioneer he writes like a poet, and his poems snatch glimpses from narratives and pin them down to the moment. Other uncollected texts are out there, worth tracking down, the SF short story “Conversations In A Darkened Place” in ‘Awen’ (Issue 76, June 2012), about two imprisoned mercenaries awaiting execution following a failed coup on a dark world, a rumoured story published under an alias in Robert Holdstock’s ‘Macrocosm’, and one in the audio-magazine ‘Tales That Terrify’, these are texts awaiting rediscovery.

When it comes to ‘Merry-Go-Round And Other Words’, I’ve probably given away far too many plot-spoilers already. Although Bryn’s fiction doesn’t necessarily work that way. Its strengths lie more around the accumulating momentum and shock nastiness than the neat closure. Although the neat closures do work like spring-loaded traps too. But I won’t pre-leak any more. Because there’s a wealth of them here. “Bomb Scare” from ‘Sci-Fright No.2’ (April/May 1995). “The Flier” from the Mike Chinn-edited ‘The Alchemy Press Book Of Pulp Heroes 2’ (October 2013), which blends crime-noir, UFO’s and Jazz (its central character LaRocca even borrows his name from the cornet-player in the Original Dixieland Jazz Band). Plus the man who saw skulls. The new sequel to “Shrewhampton North-East” – “Shrewhampton North-West”, which is both a logical extension and a visceral development of the progenitor tale. “The Teleported Woman’s Husband” about a misfiring beam-me-up technology. “Digging Of Holes Considered As Symptomatic Of Personal Compulsion”. And more.

In his introduction Johnny Mains details the personal tragedies that led to Bryn’s ‘period out of the loop’. The tragic loss of his son Jim and wife Maddalena, to whom his verse collection ‘Saying Goodbye’ (2012) is movingly dedicated. ‘The world is bent and I dropped over the edge, but landed on a rocky ledge and took root for far too many years’ he confided to me. This fine anthology reaches back to the very start of his writing career, renews our connection with the best of the years between, and presents a handful of new previously unseen gems. In total, it’s frighteningly good, an invaluable volume. Bryn Fortey is one of the good guys. 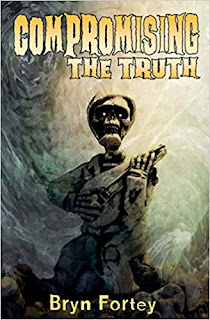 The second short-story collection by BRYN FORTEY
‘COMPROMISING THE TRUTH’
is available now from Alchemy Press at:
www.amazon.co.uk/Compromising-Truth-Bryn-Fortey/dp/1911034065/ref=sr_1_1?ie=UTF8&qid=1543234495&sr=8-1&keywords=Compromising+The+Truth+Bryn+Fortey

This review originally featured on website:
‘THE ZONE’ (UK – April 2014) 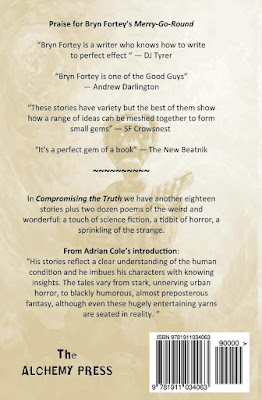 Posted by Andrew Darlington at 12:45