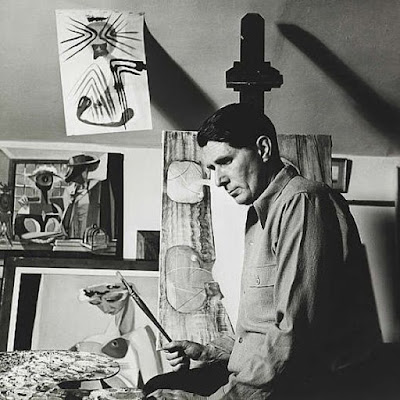 
In a world of supermarkets selling the fingers of fish in neat frozen packages beneath murals of rain-storming cigarettes – how to convey the subversion of Surrealism? Surrealism is/ was not product, but attitude. A Surrealist perception takes aspects of the normal world and uncovers the absurdity that the deaf-eyed miss. Marcel Duchamp took a hat-rack and/ or a urinal, exceptional only in their strict normality/ utilitarianism and makes them Surreal by the act of selection. The physical manifestation and personal ephemera of Surrealism, acting within and against its neat capsules of time, can become dated. Yet the aesthetic, the perception is beyond time and beyond fashion. This we recognise lurking behind the objects, assemblages, and paint layers… the ghost behind the machine, the thinking behind the reed, the action behind the reaction, in the work of English artist Roland Penrose.

Because Penrose doesn’t blind with the intellectual incandescence of a Duchamp, does not riddle logic with the inverted equations of a Salvador Dali, or overawe the critical faculty with the daunting propagandist overkill of an André Breton, he becomes human. He can be touched flesh-warm. He can be visioned in personal terms. This tactility can be sensed most intimately in a collage made up of repetitive postcard fragments where, beneath the background paint, you can see the pencil outline of planned pre-positioning (“Souvenir de Trouville”). The unravelling, the onion un-layering is there, and Penrose is one man with a pencil, a pair of scissors, and a pile of postcards. You feel the gum snagging thumb to forefinger, it’s THAT real. 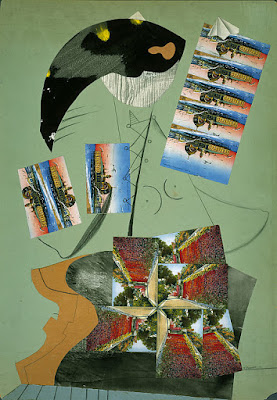 The same is true of the ink line-drawings in which the process, and the challenge, is just as naked. The process is white paper with pen. The challenge is what one man, sitting in a chair in a room with a sheet of white paper and pen has accomplished. The proof is simple, clear, incontrovertible.

I grab the Penrose exhibition at the ‘Ferens Art Gallery’ in Hull, sliding in out of January sleet. Roland Penrose was the first Surrealist with whom I got on nodding terms as an inmate at the ‘Hull College Of Technology (Humberside University)’, through a mistaken connection with graphic-art ‘The Penrose Annual’. So the slight personal homage was unavoidable. It was also illuminating. A line-drawing – “Pregnancy”, was done in 1947, the year of my birth, a post-war time of drabness, rationing and bomb-sites, yet the picture is optimistic, it forms a holy absurdity flying against every proof of moral and economic defeat/ nadir. Now – 1981, in a time of much-proclaimed new austerity, in a new atmosphere of disillusionment and repression, it is a pledge that such isolated insurrection MUST continue. And because Roland Penrose is accessibly human – not Dali, not Breton, not Duchamp, it speaks directly to ME. To YOU.

London 1947 lacks the romance of Paris. The English Surrealists have traditionally lacked credibility. The posturing of George Melly’s exploding cutlery, the luminous dialogue of poet David Gascoyne, fascinating in their own uniqueness, yet always a pale reflection down a long hall of mirrors. Even the titles at this exhibition (“Hommage À Max Ernst”, “Hommage À Miró”), and subliminal whisperings of style, speak of imitation rather than inspiration. Even the greatest Penrose moments, “Winged Domino”, speak through the terminology of others – René Magritte occludes with apple, Penrose with butterflies. The national division makes the delineation that much more clinical. It makes Penrose that much more easy to dismiss. But the dates and locations demand your reassessment. PENROSE WAS THERE. Sure, he was born in St John’s Wood in 1900, but he painted “Pequod” in Paris in 1923 where he moved amongst and was accepted by Ernst, Braque and Man Ray, delta-ing out to Luis Buñuel – leading to a cameo in ‘L’Age d’Or’ (1930), as well as Miró, Paul Éluard and Dali. Penrose lived in the Paris Surrealist vortex for thirteen years. So what were YOU doing, so what had YOU achieved at age twenty-three?

Retrospect is deceptive, shot full of trace-line Family Tree’s and correlations, but Roland Penrose was hung on the edge of 1927 when he painted “Mazout” with no view of irrelevancies like a 1960 CBE, or a 1966 knighthood, or a 1980 touring exhibition. 1927 was before Andy Warhol, before Happenings, Claes Oldenburg, Abstract Expressionism, David Hockney, Bridget Riley, Jackson Pollock, you name it. Surrealism was as hot and brutish and delinquent as Charlie ‘Bird’ Parker destructuring jazz at Minton’s in 1941, was as blasphemous and obscene and euphoric as Elvis Presley crossing racial demarcations in Memphis in 1954, as angry and iconoclastic and arrogantly wilful as the Sex Pistols aborting history at the ‘Screen On The Green’ in 1976 London. 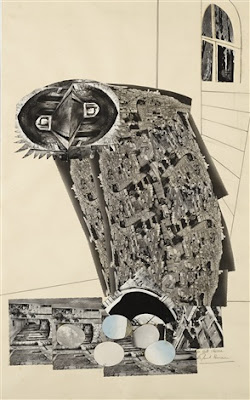 And you can still watch “Grand Jour” (1938) and interpret the water-cycle allegory piece by piece with a splendid sense of discovery. You can still be intrigued by the winged imagination of “The Conquest Of The Air” (1938). You can still be overjoyed by the wit and invention of “Captain Cook’s Last Voyage” (1936), an assemblage of nude torso, wire globe, saw handle and paint. You can still read “Portrait” (1939) like the delightfully unexpected poem that erupts through the mailbox irradiating the day with lines like ‘His hair air, his lungs a street lamp, his hand an encyclopedia, his arse his arse, his heart anything, his head nothing.’ In the summer of 1938 Penrose toured the Balkan countries by car with photographer Lee Miller, tapes of the epic on-the-road documentary poem of head-changes and eye-imprints “The Road Is Wider Than Long” – broadcast late 1979 by BBC Radio 4 – still has implications in concept and execution not totally assimilated after forty years. Listen if you have the ears. Learn if you have the perception.

British Surrealism is a footnote. Hazy connections with the great Pop Artists of the fifties are probably more cryptic coincidence than direct influence, even though – as Ronnie Scott (OBE) was to UK jazz – so was it Roland Penrose who proselytized Surrealism through his relentless PR work, his New Burlington Gallery Exhibition (1936), his Cork Street Gallery, his co-founding and endless support of the ICA, through to the Dada/ Surrealist Hayward retrospect of 1978, which he co-organised.

Disciplines of Art and the verdict of academia are the empirical illusions of textbooks. Shedding all wrappings and preconceptions you get one individual as you and I are individuals. Roland Penrose was/ is a Surrealist. More important he was/ is a man you can/ could touch. A fountain of truth, now as then. 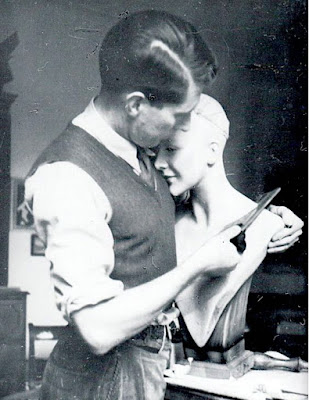