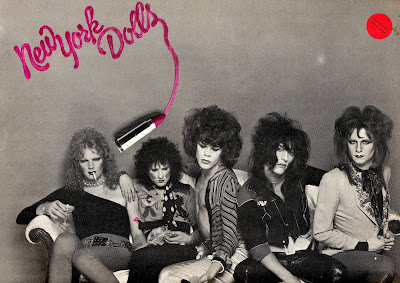 STILL LOOKIN’ FOR A KISS 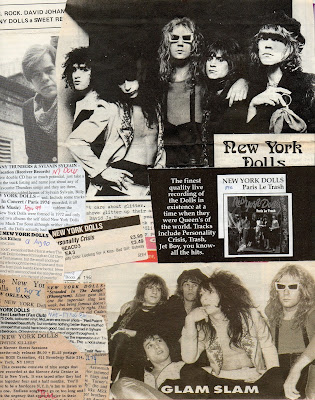 In his learned volume ‘Dressing Up: Transvestitism And Drag’ (Thames & Hudson, 1979) Peter Ackroyd declares the New York Dolls ‘radically subversive’, and, sure – the scuzzbags were something of a Fabergé hand-grenade. For these five demon Barbies construct a bridge from class-sixties Situationist outrage to what was best of the seventies to come, from Shadow Morton to Malcolm McLaren, from the Shangri-Las (‘when I say I’m in love, you best believe I’m in lurve – L-U-V’) to the Sex Pistols. They might not have been the first cross-dressing sleazeballs by a long mainline shot. Frank Zappa’s Mothers of Invention dragged up for the ‘We’re Only In It For The Money’ (March 1968) smudges, as bearded and repulsive as the Dolls would later be gaudy and bawdy. The Rolling Stones did it for their “Have You Seen Your Mother, Baby” promo-film. While “18”-period Alice Cooper in ripped fishnet tights threatened all manner of transvestite perversions before quitting shock-rock for Los Angeles golf-courses with Andy Williams. 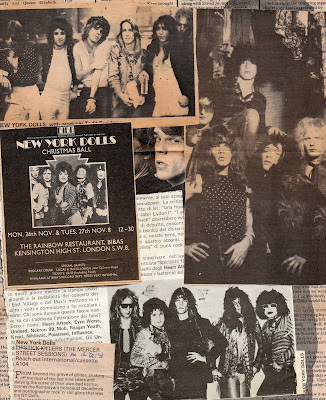 But New York’s own Livin’ Dolls – one Mick Jagger and four Keith Richards’, resprayed in napalm lip-gloss, occupy the centre-ground between decades. From 1971-’75 there’s no-one to touch their deranged turbo-charged adrenaline energies – artificial, chemical-based, glam-drogynous lady-boys, but magnesium-bright. See them teeter precariously on their stack-heel glitter-wedges on Old Grey Bob Harris’ ‘Whistle Test’, a screaming double-lead mess of irresistible noise, sixteen and savaged. Just look at the album jacket – in an era dressed-down in faded denim and copious dandruff only the Dolls blatantly list their hair-spray and cosmetics in the liner notes. Look at Johnny ‘Gonzales’ Thunder reading ‘16’ teen-zine strung out on the meat-rack all those years before he became a Heartbreaker who tripped-out on “Chinese Rocks” – he’s the pure incarnation of “Trash” in a “Personality Crisis”. See David Johansen strutting a slutty paedophile’s wet dream – he’s a “Vietnamese Baby” “Looking For A Kiss” long before he got ‘Funky But Chic’. Then there’s bassist Arthur ‘Killer’ Kane and guitarist Sylvain Sylvain on that hung-over “Subway Train” headed for the ‘Last Exit To Brooklyn’, fuelled on Bo Diddley’s “Pills”. Drummer Billy (Murcia) Doll suicided even before that first album, so it’s Jerry Nolan there under the lipstick cover-scrawl logo at the precise nexus where “Jet Boy” meets the “Bad Girl”.

And the first album – ‘New York Dolls’ (July 1973) is metal-punk all the way, bratty riffs, slurred and messy, as snotty as a runny nose, yet melding into something that not-so-much smells as reeks of teen spirit. So much so that in its tarty wake volume two just has to be something of a post-coital anti-climax. Hence ‘Too Much, Too Soon’ (May 1974) stacks up four odd non-originals, the vamped-up novelty near-hit “Stranded In The Jungle” – which makes it for at least three or four plays. And the Gamble and Huff ‘n’ puff “There’s Gonna Be A Showdown”, which doesn’t. “Mystery Girls”, “Babylon”, and “Puss ‘n’ Boots” compensate some, they French-kiss and tell with the best. And both albums siamesed together in this bargain-basement twin-set form a megaton-happy prestige fun-pack. 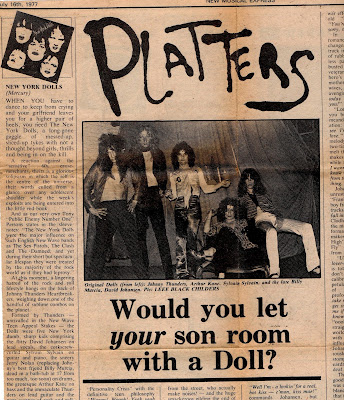 ‘Radical’? ‘Subversive? – the New York Dolls? Perhaps not – bless their little latex panties. Without them, would Rock history be significantly different? Probably not. Morrissey (Steven not Dick) joined the ‘New York Dolls Fan Club’, McLaren for-sure picked up some useful strategies from his brief late-flounce as the Dolls’ manager, which he subsequently fine-tuned for targeting the Pistols’ outrage, betcha there’s more Dolls than Velvet Underground on the Damned’s “Neat Neat Neat”, and… er, without them would Tony James’ Sigue-Sigue Sputnik coxcomb have been quite so flash? We could drag Wayne/Jayne County, and perhaps even some of Marilyn Manson’s more calculated outrage into the equation. But why bother? Even though the surviving Dolls reform for London’s 2004 Meltdown Festival at Morrissey’s behest, Melvyn Bragg will never devote a ‘South Bank’ hour to them.

But ‘Let me ask you just one question, do you think you could make it with Frankenstein’? These guys did.

(April 2009) ‘CAUSE I SEZ SO’ (Atco) Five years after the 2004 reformation, and three since their glossy-sounding Jack Douglas-produced comeback album ‘One Day It Will Please Us To Remember Even This’ (Roadrunner), reinstalled with their 1973 producer Todd Rundgren, David Johansen and Sylvain Sylvain cover familiar ground, sixties girl groups and unvarnished Faces riffs, with a raw swaggering sound and a lyrical vulnerability that comes from acting their age. A downbeat “Making Rain”, ‘the beefy title track and a mournful, reggae version of 1973’s ‘Trash’ are just two of many highlights’ says Campbell Stevenson (‘Observer Music Monthly), ‘this most unlikely reunion is in danger of being a big success’. 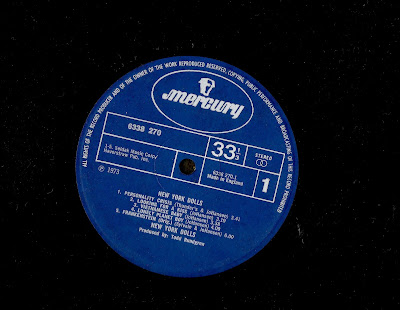 Posted by Andrew Darlington at 20:34