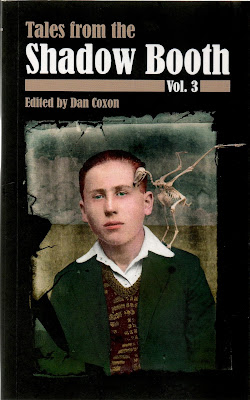 Things are not always what they appear. Three racial stereotypes are trapped in a comedy sketch that never ends. A shopping mall refuses to be demolished, and keeps growing back. A girl named after the singer with Jefferson Airplane disappears through a dream doorway that doesn’t exist. In the Shadow booth there are hidden dimensions and unsuspected detours. A gay boy escapes his bullying tormentors by entering a canvas construct that is now no longer there. Like the Englishman in the joke, sometimes these tales are about the power of words set into a specific repeated system in order to elicit a response. Sometimes, as with the Scotsman, they are about dissonance, the reversal of expectations. Appearances are deceptive. Stories can be beguiling conundrums that tug reality out of shape. The settings are never strange. They are recognizably normal. There’s just that one tick which sets them askew. For these tales of the unpredictable, unsuspected and unexpected, you must abandon preconceptions as you step inside. As Rene Magritte says in Verity Holloway’s “The Cherry Cactus Of Corsica” – ‘everything we see hides another thing.’

Within the Shadow Booth, things are never quite what they first appear. When Emilio’s Mama comes home from hospital, it’s only he who realizes that it’s not really his Mama but something else, something cold and ancient. These are eleven new stories here, offering a new remix of names – Jill Hand, Nick Adams, Robert Shearman, Judy Birkbeck (“Meat”), the Mexican Raquel Castro (in translation) and French-born Armel Dagorn (“Hermit Island’s Hermit”), who nevertheless attune intuitively around the theme. The one about the school inspector who finds himself trapped in a mutant Wicker Man nightmare is by Manchester’s Richard V Hirst who was in ‘Tales From The Shadow Booth no.1’, as was Annie Neugebauer from Texas whose “I Am” finds her trapped in the symbolist enigma of a post-bomb purgatory. Not quite Horror. Not quite art-literature. But with elements of each, breathing a similar atmosphere. Dan Coxon’s anthology series just keeps getting stronger. Within the ‘Shadow Booth’ things are never quite what they appear.

Posted by Andrew Darlington at 19:51