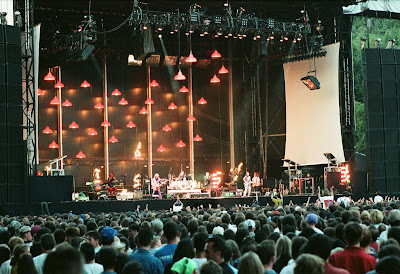 
Credibility. It’s a fluid thing. An unstable fissiparous element. If ever there was a prototype Indie group it was REM. And the Smiths. They had cult credibility. They were an insider thing. They belong to their elitist audience in ways that undercover Rock bands do, defining more than just music, but entire life-style. So what happens when they have hits…? How do they balance the two elements, cult and mass sales? An impossible conundrum. For REM it happens with ‘Out Of Time’ (1991) – their seventh long-player. Two tracks, “Losing My Religion” and “Shiny Happy People” became massive hits, shoving the album to no.1 on both sides of the Atlantic. ‘Automatic For The People’ (1992), eighteen months later, compounds the status-shift. “Everybody Hurts” is a perfectly good album track. It’s not REM’s fault that, as a mass-market single, it gets taken up as anthem for all kinds of shallow emotionalism, provoking the lighter-in-the-air kind of ritual bonding. 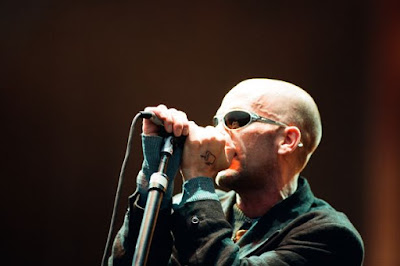 The McAlpine Stadium was opened in 1994, named for the man whose construction company built the M6 Toll, as a venue for Huddersfield Town football team. There’s seating for 24,500 people. The town, converging on Stadium Way down from the town-centre, is gridlocked for the concert. We shuffle through endless security zigzags in tribe-less queues. REM can no longer claim to be insiders. They can no longer pretend to be cult. Judging by the audience they’re attracting, they’re pretty-much mainstream. How can they pull this weirdness off, and stay true? They attract stadium-crowds, but surely they can’t devolve to the stadium cliché theatrics? Yet the logics persist. To be seen from the heights of the upper tiers, even with big screens, it’s necessary to exaggerate, to be larger than life, which is the antithesis of what REM have claimed to be. 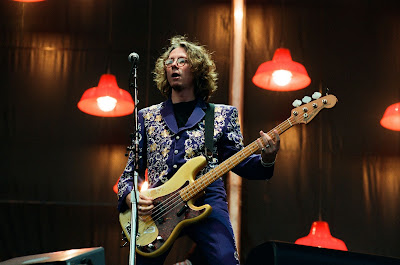 This is the ‘Monster’ (1994) tour. Another watershed album. One that uneasily grapples with their problematic fame, and attempts to shrug it off. Peter Buck seems to have discovered loud distorted guitar tones, which he uses to deluge and disfigure, not only the singles from this, their ninth studio album, but all over the previous ‘hits’ too. A deliberate rupturing, slurring preconceptions. A scribbling hard edge overlaid across the Folk-Rock harmonies. A grit in the balm. The first three songs they do, and the fifth, are from the new album. Singles “What’s The Frequency, Kenneth” and “Crush With Eyeliner” both punk-strong reverb-heavy throw-away songs done ‘in character’, which is a distancing strategy legitimising observation over confession. Cut-ups of media items picked up and found-news incidents. Again, an ironic escape device from REM, into faux-REM. 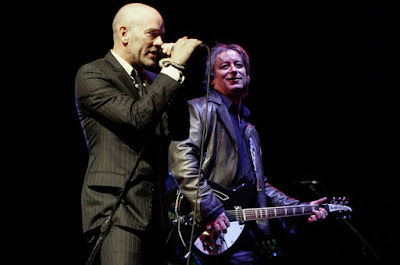 The fourth song – “Orange Crush”, is from ‘Green’ (1988), and is an anti-military attack on the defoliant produced by the Monsanto Corporation for devastating atrocity during America’s Vietnam debacle. Buck’s guitar repaints it into a Pop-art caricature, navigating around its original meaning and forcing it through destabilising changes. Playfully disrespecting their own legacy, but also recasting it into new shapes. Michael Stipe is less pretty than before. Head shaved, emphasising the wire arcing from his right ear. Buck wears sequins on his pants, striking mocking Jimmy Page stances. When they do “Star 69” Stipe announces it as the sixty-ninth gig they’ve played this tour, which is a nonsense he’s apparently repeated at each venue. But it betrays the playful edge they’re using to undermine the ‘star’ dignity of the occasion. His delinquent dancing is also a ludicrous thing. That they do “Losing My Religion” and “Everybody Hurts” is perhaps a concession to expectation. But by the time they’re into the encore with a breathlessly perfect “It’s The End Of The World” they’ve little left to prove. A kind of equilibrium has been established, very much on their terms.

Does it work? Today the sun shines, and it works for me… 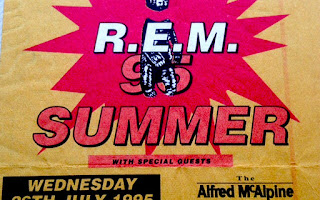 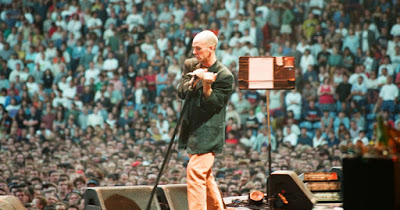