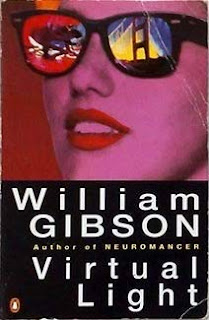 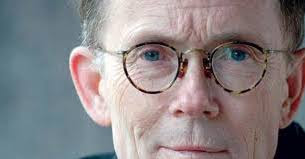 This novel is barely even SF. It’s more exaggerated gimmicked-up reality, with attitude. An image-intensified Shoot-‘em-Up Cop thriller with ‘Bladerunner’ add-ons and ‘Hacker Conspiracy’ peripherals. With jaunty Mirrorshades set to dazzle. Short phrases that stab with clipped speed-sharp scatological dialogue and jargonisms heavy with pre-digested technospeak and brandnames, real and to come. Style-aware to a fault. It’s twitchy tightly-machined prose in which silver eyes reflect the red of passing taillights. The Death Star Satellite downloads datascapes to you, you get AIDS vaccination, and TV mulches past and future into an endless now. Heaven, Hell and Los Angeles.

Gibson’s is an imagology, a dystopian world busy manufacturing illusions, cruising the already gridlocked infotainment superhighway where reality is only skin-deep. Where a Chinese girl gets her newspaper ‘printed out so there’s never any mention of scandal or disaster, but with a triple helping of celebrity romance, particularly anything to do with the British royal family.’ 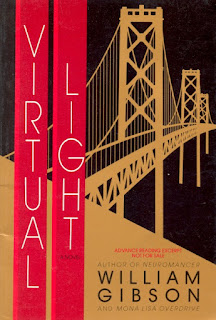 The slender narrative threads come spiked on Berry Rydell – an IntenSecure private cop, and Chevette Washington – a kind of literal Tank Girl bicycle courier who lives in a low-tech shantytown on the earthquake-wrecked tunnel-bypassed derelict Golden Gate bridge. Bicycle courier? Gibson says that in the electro-infonet where all datafeed can be commonly accessed and intercepted, nothing can be kept private. Except in physical packages carried by physical couriers. ‘Modernity was ending. Here, on the bridge, it long since had.’ These characters randomly intersect through the medium of some thefted black Virtual Light datashades, eyephones logging them into agents of the Sunflower Pacific Rim nasties. Then God-Eater, and the Republic of Desire digital underground. Bruce Sterling once wrote that ‘mirrorshades – preferably in chrome and matte black, the Movement’s (ie, Cyberpunk’s) totem colours – appeared in story after story, as a kind of literary badge.’ Here, perhaps referencing Sterling, they become the crux of a novel.

But that’s largely an excuse for flash-frame writing impaled on barbs of ironic wit which spills off the page and interacts with presets in your head. A Gibson character muses ‘he thought that was probably bullshit, but he sort of liked the sound of it anyway, like what happened to old people on television.’ The media-literate reader connects to its hidden visual vocabulary on just such slight suggestions. Because we’ve seen the same programmes. There’s a Rock Star called Chrome Koran who has a hit with “She’s God’s Girlfriend”. Chevette recalls earlier stars like ‘that black guy who turned white, and then his face fell in.’ We know who she means. We’ve read ‘Q’.

The problem is, we’ve done ‘Virtual Light’ too. We not only read it, we live it, through all those ‘Horizon’-style VR and Cyberspace-race docudramas, magazine spreads, ‘Wired’ and ‘Mondo 2000’ back-issues. Hell – Gibson himself is IN most of them. And this likeable novel is no longer so much Cutting Edge Future Shock as a glow of pleasing glitch-free familiarity. ‘We are come not only past the century’s end’ Gibson comments, and ‘the millennium’s turning, but to the end of something else. Era? Paradigm? Everywhere, the signs of closure.’

Posted by Andrew Darlington at 19:06