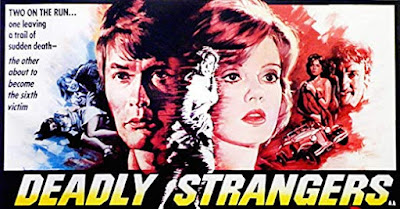 ‘THERE’S A KILLER
ON THE ROAD!’

‘PSYCHIC! PSYCHO! MACABRE!
NOT ALL NIGHTMARES
HAPPEN WHILE YOU SLEEP!’

He pulls into the petrol station forecourt. There’s no attendant in sight. So, he circles around the rear of the building where, through a window-crack, he happens to see a girl in white underwear changing into her yellow uniform. His eyes narrow in close-up as he spies on her. This is a film that questions assumptions about male sexuality. A film that plays uneasily with gender expectations. What would be a normal response to this situation? Does his sly voyeurism indicate pervy tendencies… or is his prurient reaction only natural? Something every red-blooded male would do, gifted with the opportunity. Later, he enters the ‘Old Bakery’ store, pausing to glance at a window magazine display of soft-core pin-up magazines, ‘Fotos’ and ‘Men Only’. Of course, his interest is natural – isn’t it? Or is his longing glance evidence of a deeper disturbance?

‘Deadly Strangers’ opens uncompromisingly with a primed syringe. And a nurse pushing a trolley down a corridor of sealed rooms. She checks the spy-hole into room twelve. Once inside, she’s attacked with her own momentarily untended syringe. The occupant of room twelve has escaped. ‘A Nutter escaped from Greenwood’ mental hospital for the ‘guilty but insane.’ Later, a house is burgled, the bedroom ransacked. And a car is stolen as the driver uses a phone-booth. As he rushes out to stop the car, he’s struck and left for dead. 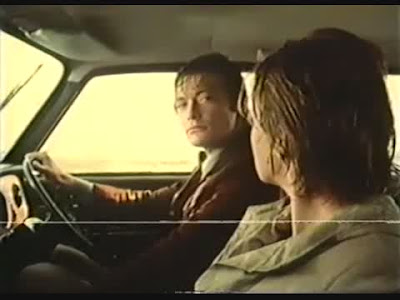 I must have seen this modest film during its first cinema run, and retained a strong memory. But was it Malcolm McDowell? Or was it Hywel Bennett? It’s only when Simon Ward died 20 July 2012, reading his obituary that I realised yes, it could only be him. The role of Stephen Slade could never by Malcolm McDowell, his cruel assured guilt would be an automatic conclusion. Nor Hywel Bennett, his easy charm would take him above suspicion. Slade must have an element of both, but also a weakness stronger than either. And Simon Ward captures that flawed quality as no-one else could. Maybe that’s the very element that kept him from major stardom? He’d started out well as an uncredited schoolboy in Lindsay Anderson’s ‘If’ (1968), then as the romantic interest in Hammer’s ‘Frankenstein Must Be Destroyed’ (1969). He played Winston Churchill in ‘Young Winston’ (1972), and the Duke of Buckingham in both Richard Lester’s ‘The Three Musketeers’ (1973) and ‘The Four Musketeers’ (1974). But it was own easygoing lack of ruthless ambition that determined he’d fail to realise such latent promise. Yet he’s perfectly cast against Hayley Mills in ‘Deadly Strangers’. Likeable, sixties fringe, modish belted suede jacket, fawn slacks, but carrying the hint of something hidden.

It’s a road movie of a particularly English kind. A bleak, flat, colour-drained countryside. Rain drizzles. A tanker from Birmingham pulls into the Roadhouse. The forecourt pooled with lakes of rainwater. Simon Ward feeds five-pence coins into the one-armed bandit. He sees Hayley Mills enter, and the trucker who offers her a lift to Greenwood Station. He drinks directly from a brandy-bottle, and leaves hurriedly as cops arrive to check out the travelers. ‘A maniac on the loose.’ ‘To look at them you’d never think they were dangerous.’ ‘Half of them don’t even know it themselves.’ 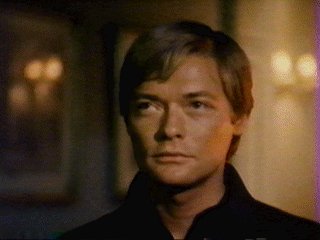 There was a gratuitous flash of thigh as the nurse is attacked in the opening sequence. Now a titillating glimpse of leg as Hayley settles into the truck-cab. It’s only later that the driver pulls off-road into a lay-by to ‘settle the fare’. A ride for a ride. She struggles with him, spilling out onto the roadside. But the trucker speeds off as Ward happens by in his blue Austin Maxi saloon. He sternly advises ‘you’re asking for it, hitching lifts with those drivers.’ ‘I can take care of myself’ she retorts. He is Stephen Slade, She is Belle Adams. He drives her to the rail station, but deceives her that there are no trains due… but he can take her further, if she wants? As the journey resumes the car is forced to halt at a level crossing. A train speeds by. His lie found out. Are all guys on the make? Is his approach merely a more subtle variant of the trucker’s frontal assault?

She accuses him, that he’s lied. No, he argues back defensively, he just enjoys her company. Can she trust him? In a flashback it seems he’s unable to sexually perform with a party pick-up, something he finds ‘difficult to talk about’. In another flashback a girlfriend finds his stash of pin-up magazines. He’s socially clumsy, uses a primer on making friends to prompt conversation ‘Do you know how long it takes to boil an ostrich egg?’ pause, ‘Four hours.’ But she finds a letter and a farming magazine in the glove compartment. Suggesting that perhaps the car isn’t even his!

But she has flashback secrets too. The childhood car accident that killed her parents. Staying over with her pervy uncle and glimpsing him romping in the hay with a stable-girl. Then the recurrent nightmare of the drunken Uncle raping her. Hayley Mills had been an engagingly cute child-star of the Disney house-of-the-mouse. As the second of six films for them she played both sisters in the original ‘The Parent Trap’ (1961), even dueting with herself on the spin-off hit single “Let’s Get Together” (no.15 in ‘New Musical Express’ 11 November 1961). In the UK she was an outstanding innocent in the Bryan Forbes-directed ‘Whistle Down The Wind’ (1961), as a gullible schoolgirl mistaking fugitive murderer Alan Bates for Jesus. Such iconically charming and hugely popular roles necessitated an uneasy transition to more mature roles. She starred opposite Hywel Bennett as a newly-wed couple unable to consummate their marriage, in the kitchen-sink drama ‘The Family Way’ (1966) – with music by Paul McCartney. The same need to grow presumably legitimises the brief topless sequence in ‘Deadly Strangers’, gratuitous maybe, although there’s some plot legitimacy, for it’s also a defiant assertion of her adult independence. Miley Cyrus, another Disney alumni, would much later go through her own very public growing pains. 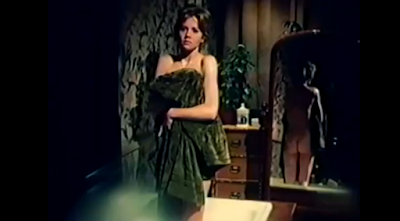 Stephen is speeding. The cops give chase. He can’t afford to be stopped – he says, because he’s been drinking. So he veers off onto a dirt-track to avoid them. Later, at a Greasy Spoon, two bikers muscle in. They give chase afterwards, buzzing the car. She advises him to pull over as they smash through a farmer’s roadside milk-churns. But no, it gets personal, he ramps it up into a feud, rams one of the bikers off the road. The bike bursts into flame. She drives now. They’ve another reason to avoid police checkpoints. The biker might have been killed (he’s not, both bikers are later seen in a pub drinking beer). Now they’re both on the run. They both have their reasons.

There’s an odd mid-sequence in which the awkward couple are accidentally parted. They sleep – separately, in the car. In the morning he wakes and finds she’s gone. ‘Bitch’, and he speeds off, passing her as she buys bread for their breakfast in the local shop. Nevertheless, she’s soon picked up by bearded Fortesque-Robarts, a hugely over-the-top eccentric performance by American actor Sterling Hayden in a vivid cameo (he’d been General Jack Ripper in the classic ‘Dr Strangelove’, 1964). As he passes by a petrol station, Stephen sees Robarts’ ‘magnificent motor vehicle’, and gives chase. They maneuver in a series of exchanges and close encounters, teasing out tension and coincidence, by the pier on a windy seaside promenade, in the ‘Crazy Hazy’ out-of-season funfair, the two cars passing each other in alternate multistory spiral-ramps. Director Sidney Hayers knew about mixing light and shade, he’d earlier directed Hammer’s shocker ‘Circus Of Horrors’ (1960), as well as Cliff Richard And The Shadows nuclear hide-and-seek musical ‘Finders Keepers’ (1966). Now, after Belle and Stephen are reunited, Robart buys the ‘Daily Press’ with the headline story of the Greenwood escaper and the murdered filling-station girl, and he makes the connection. But which of the two is he attempting to warn? 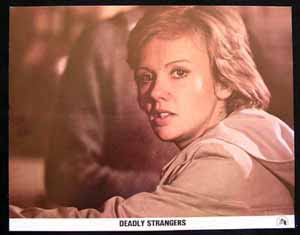 By the third section they’ve booked in at the ‘Hillcourt Hotel’. He signs in as Mr Jones – ‘Is it your wife?’ ‘Yeah, sure’, and they take the fishing lodge, £10 a night, in advance. There’s a stuffed fish in a glass case, and a chart of waterfowl on the wall. This is more than just a Slasher-Movie, it is a film that questions assumptions about male sexuality. Whatever his intensions, she makes it clear they will sleep separately. She even braces a chair against her bedroom door, to keep him out. So he spies through the keyhole as she undresses, as he’d fantasised about her in black stockings and suspender-belt earlier. His single close-up eye narrows as she slips her bra off, straining to see better. He selects a sharp knife to enlarge a chink in the chalet-wall, to peer through. Does this furtive voyeurism indicate pervy tendencies… or is his prurient interest only natural? Is this stepping outside normal acceptable behavior patterns, or something every red-blooded male would do, gifted with the opportunity? Is the male always predator, the woman always the victim? These sympathies and gender expectations have been teased and exploited throughout this tense and intriguing film. Now it flips them over.

Finally, the plot spoiler to end all plot spoilers. Re-spool to the opening, who was the ‘Greenwood Escaper’? We never see the face. Later, when they pull in for fuel Stephen tries the phone around the corner. Belle stays in the car… doesn’t she? So who attacks and kills the petrol-attendant girl? When Belle picks up the evening paper, Stephen’s face is prominently headlined. When he later finds the same paper and opens it up fully, the subhead ‘This Man Is In Danger’ runs under his photo. Too late. She attacks and garottes him from behind, as she had her evil uncle. The police arrive. But he’s already dead.

As the police drive her away she tells them ‘do you know it takes four hours to boil an ostrich egg?’ quoting his primer chat-up line with a curious smile on her face. The cell door slams shut again behind the ‘maniac’. Audience preconceptions neatly skewed. But wait. If her murderous insanity was precipitated by her Uncle’s attempted rape, hasn’t she also been the victim of predatory male sexuality all along? This is a film that questions assumptions about gender roles, and it is still asking them. 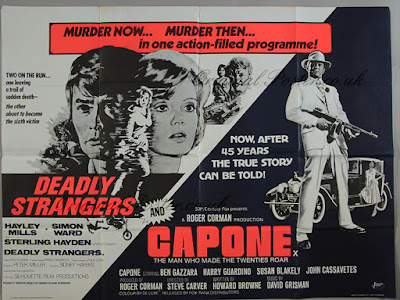 Posted by Andrew Darlington at 21:06

Simon Ward happens to be the dullest figure in the movie. Whenever he appears, it's as if he's not even there, as if the viewer is looking through him.

Is she the killer or are they both killers?