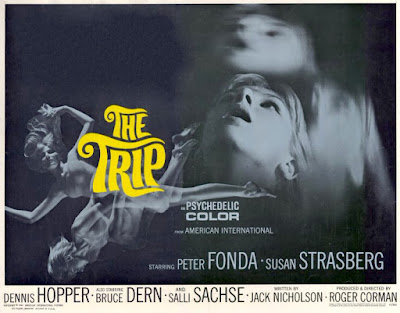 It’s impossible to emulate a dead hero. They’re forever out of reach. Dennis Hopper started his career with a part in ‘Rebel Without A Cause’ (1955), and spent his life in awe of James Dean. Living heroes let you down. Dean himself was in awe of Marlon Brando, especially his cool biker role in ‘The Wild One’ (1953), riding that big Triumph Thunderbird 6T. There’s a story that when Dean learned Brando was to be there at a Hollywood party he was due to attend, he went in the full perfecto-style motor-cycle jacket and tilted cap ‘Wild One’ gear, in an attempt to impress his idol. But Brando had moved on. He was less than pleased. ‘Who’s this guy wearing my last year’s wardrobe?’ he sniped, ‘you’d better get him to a doctor, he’s very sick’. James Dean didn’t live long enough to betray his image. Had he lived he might have wound up doing a US Soap, or failing into mid-life tedium. As a cool-looking corpse he set an impossible standard for Hopper to follow. And hip tends to shift and assume new forms. 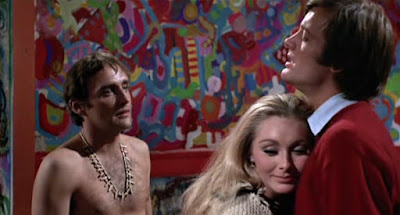 Hopper set his own brand of counter-culture generational cool with Peter Fonda riding Harley Davidson’s across America in ‘Easy Rider’ (July 1969). But before that, they’d appeared together in cult oddity ‘The Trip’ (1967). The third part of the ‘Easy Rider’ team was Jack Nicholson – as ‘Billy’. He wrote the screenplay for ‘The Trip’. Jack had already appeared in Roger Corman movies, and director Corman is renowned for granting his protégés opportunities. He encouraged Jack’s experimental writing styles and, in the DVD director’s commentary, allocates between 80-90% of the shooting script to him.

Peter Fonda, the son of a wealthy acting dynasty, seems an unlikely ‘Captain America’ hippie hero. But the self-styled ‘American Dreamer’ had already figured in Corman’s cycle of dope and biker flicks, taking the central role in ‘The Wild Angels’ (1966), from which his dialogue was sampled by Primal Scream. He was a mover on the bourgeoning counter-culture scene. John Lennon based his ‘Revolver’ song “She Said She Said” on Fonda, after meeting him at a LA poolside party where Fonda repeatedly related his acid-tripping experience, about how ‘I know what it’s like to be a dead’. A line he uses here. So there was already a potent talent-pool simmering even before shooting began. Like earlier drug-exploitation movies ‘The Trip’ opens with an escape clause pre-credit disclaimer, a warning of ‘great concern to us all’ about the use of ‘mind-bending chemicals’. In the light of what follows this is obviously a legal fig-leaf to deflect accusation. Much as ‘Reefer Madness’ (1936) had started out as a Church-sponsored morality tale, and wound up on the exploitation movie-circuit. 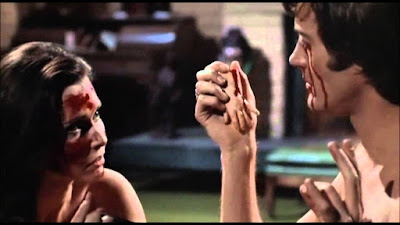 The story? There is no story. Fonda is Paul Groves. He takes LSD and has a series of weird supposedly-significant cod-pretentious hallucinations. That’s about it. The character is going into a painful divorce. He wears ‘very groovy boots’. He shoots glossy TV-ads in the surf. Much as the film he’s part of is pretty much a glossy ad for LSD. Acid was then the magic elixir. The lysergic catalyst behind the psychedelic revolution. Behind ‘Sergeant Pepper’ and ‘Their Satanic Majesties’, behind ‘Axis Bold As Love’ and ‘Surrealistic Pillow’. Behind extravagant new art, poetry and innovative magazines. Timothy Leary was promoting it as an instant tool to meditation, a route to reaching the kind of nirvana-high it took eastern mystics decades of discipline to achieve. Leary is the ghost at this celluloid party. While Vietnam war-news is on TV, the sixties other persistent presence. 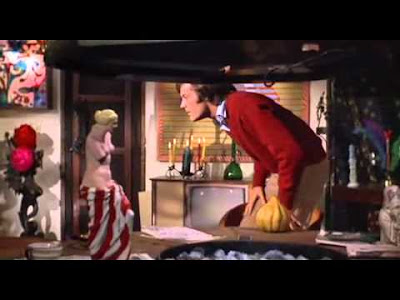 Filmed around Laurel Canyon, and Big Sur – where Jack Kerouac wrote one of his best novels, Paul drops in at a graffiti’d crash-pad strewn with stoned hippies. A scrawny Max (Hopper) passes Fonda a joint, ‘a heavy trip’. But Groves wants to take acid. Why? ‘to find out something about myself’. As in Leary’s ‘The Politics Of Ecstasy’ (1968) guide-book, he approaches his trip in the correct approved fashion. He prepares his mind-set, with music and poetry – the City Lights edition of Allen Ginsberg’s ‘Howl’ prominently on-screen, with John (Bruce Dern) as his guide, who advises him to ‘turn off your mind, relax, and float downstream’ (Dern had also appeared with Fonda in ‘The Wild Angels’ as the doomed ‘Loser’). Fonda washes down a white capsule with a swig of apple-juice. And the trip begins. 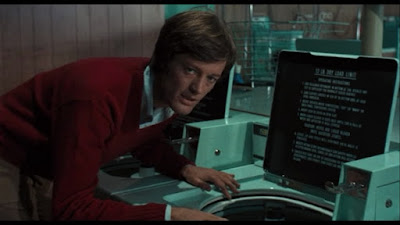 Soon, there are kaleidoscopic low-budget effects, swirling drip-art, a girl on a primal beach, dark Tolkien figures on horseback, a girl in body-paint, a dwarf (Angelo Rossitto). His consciousness splits between vast desert, and a Gothic mansion, in a part-Corman exploitation horror style, part Ingmar Bergman’s ‘Seventh Seal’ – but no, that’s to rate it way too high. He’s suddenly aware of the radiant energy of everyday objects, holding an orange is like ‘the sun in my hands, man’. Words and phrases are loaded with hidden meaning, the living room becomes a room which is living. And ‘that whole sex thing’ is amplified with trippy light-show effects playing over naked bodies, making detail swim uncertainly. There’s clumsy symbolism. A child’s hand. An arboreal forest. His own death, awareness of his own transient mortality. He flips out, ‘I’m frightened to die, man’. Then ‘I’m dead, I’ll never get back’. Hopper appears within the trip as his Inquisitor on a carnival carousel. He poses an accusation, what is Groves guilty of? He’s guilty of TV commercial ‘lies’. Guilty of ‘total self-involvement’. Guilty of his middle-class life-style. Guilty of consumer materialism. In a numinous cascade montage sequence, allegedly contrived by Corman himself, there are flash-frames symbols of it all, of Che Guevara, LB Johnson, Sophia Loren, Khalil ‘The Prophet’ Gibran, and a dollar bill. Plus ‘The Bay Of Pigs’ invasion. LSD shows a better way. 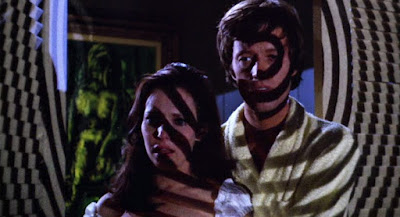 Then he hallucinates that guide John is dead, he panics and escapes into ad-spattered LA, a collage of tacky signs and images. He stumbles into a Laundromat which becomes an ‘incredible’ thing of wonder. He investigates the washing machine’s spin. Its groovy vibrations. ‘Shazam’. He descends into a trippy Sunset Strip Disco where clubbers idiot-dance to endlessly noodling improvisational swirls and where painted nipples shimmer. ‘You’re stoned out of your mind, aren’t you’ observes the waitress, ‘what’s the matter with you guys? Isn’t the real world good enough for you?’ leaving a parting barbed-humorous ‘Love Freak!’ When a pair of cops enter the club Groves runs. Eventually he winds up back with Max who tries to interpret his account of what’s going on in his head, ‘let’s sort the real from the Trip’. There’s a rapid-fire riffing of motifs in a blur of flashbacks. The black hooded figures are revealed as his competing love-interests. Love, sex and death. Does he come out of the Trip any wiser? Does he resolve his dilemma? Waking the following morning with girlfriend Glenn he’ll commit no further than ‘well, I’ll think about that tomorrow’, as his face splinters. What’s it all about? Ask Alice…! 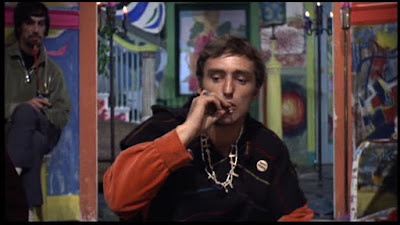 Is the film an accurate representation of what it’s like to experience LSD? A true celluloid portrayal of the scrambled transcendent images dancing across the cortex, the derangement of the senses? No. Obviously not. By taking an inner landscape of altered consciousness and projecting it onto a screen, how could it be? But it precedes later attempts at visualising a drugged state, such as Ken Russell’s ‘Altered States’ (1980) or David Cronenberg’s movie of William S Burroughs’ ‘Naked Lunch’ (1991) (in a further connection, Hopper worked on an aborted screenplay of the same writer’s ‘Junkie’ during 1977, with Terry Southern and Burroughs himself). But it also precedes Homer Simpson’s surreal trip after eating the ‘Guatemalan Insanity Pepper’ in ‘The Mysterious Voyage Of Homer’ (episode 162) too.

So is ‘The Trip’ dangerous? Is it likely to subvert vulnerable minds? After all, it was rejected by the British Board of Film Classification four times – in 1967, 1971, 1980 and 1988, before it was finally screened by Film Four in 2002, and not granted an uncut DVD certificate until June 2004. The three protagonists responsible for ‘The Trip’ – Hopper, Fonda, and Nicholson, would lift cult underground into massive overground with ‘Easy Rider’ a few years later. But this slight opportunistic and – objectively, rather silly movie is not consciously a dry run for what is to come. It’s striving for gravitas, but winds up mostly psychsploitation trend-mugging. Yet in its odd way it is sincere, an attempt to express intangible changes that were effecting and transfiguring their lives, individually and collectively, and would continue to do so in their separate future trajectories. With Hopper in particular as the awkward outlaw rebel that James Dean never lived to be. 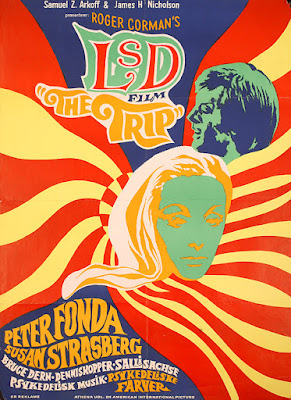 ‘THE TRIP: A BIG THRILL
IN A LITTLE PILL’ 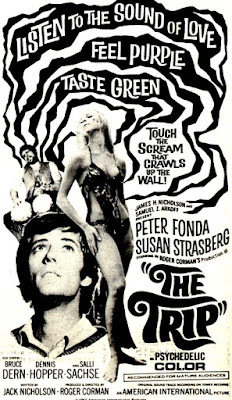 A related movie – also on DVD, is ‘PSYCH-OUT’ (American International Pictures, 1968) with Susan Strasberg as deaf-runaway Jenny who arrives at the Haight-Ashbury Hippie nexus hunting her lost brother. She gets involved with free-loving Jack Nicholson (as Stoney, an unconvincing member of the outta-sight ‘Mumblin Jim’ Rock band) – ‘it’s not money, it’s life, it’s human life’ he tells her, and they track down brother Steve in the manic guise of ‘The Seeker’ (Bruce Dern). Despite a soundtrack by Storybook, plus guest sequences showing The Seeds and Strawberry Alarm Clock, with glimpses of a street-vendor selling u/g magazine ‘The Oracle’, and protestors protesting with blank placards, it’s a little too contrived to feel authentic. Produced by Dick Clark. Directed by Richard Rush. Story and Screenplay by E Hunter Willett (with Betty Ulius) 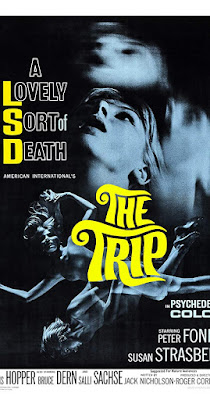 Surely an exploitation movie – but I love every minute of it. It could only be filmed in 1967 and is a history lession in pictures. And of course not every trip may be a relevation, sometimes the experience may be rather blunt ...