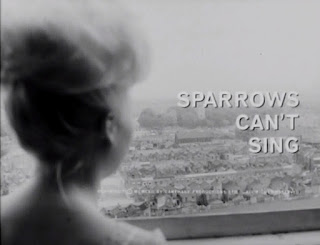 BETWEEN ‘CARRY ON’
AND ‘EASTENDERS’:
‘SPARROWS CAN’T SING’

Barbara Windsor has been a celebrated part of two great British institutions – a spread of ‘Carry On’ films, and as ‘Peggy Mitchell’ in BBC-TV’s ‘Eastenders’. Her central role as ‘Maggie Gooding’ in ‘Sparrows Can’t Sing’ positions her pretty much mid-point between the two, or more tactfully, points up the continuity between the character-parts she’s best known for. The scene where she flounce-wiggles down Jamaica Road towards the ‘Red Lion’, as the feral children sitting on the wall wolf-whistle at her is so pure ‘Carry On’ you expect a leering guffawing Sid James to be the taxi-driver. While the plot-premise, the returning errant husband turning up looking for his equally feckless wife who is shacked-up with a new, also married man, is pure Soap storyline. Charlie Gooding (James Booth), is the tearaway merchant-seaman home from a long voyage – ‘two years in the wrong ship’, who find his terrace-house has been razed in slum-clearance, its demolition-site remains left in an island of rubble overlooked by shiny new towerblocks. He’s told that they pulled ‘em down before they fell down. While the bush-telegraph alert goes around the manor that he’s back, intent on warning missing wife Maggie (Barbara Windsor). She’s now living with bus driver Bert Briggs (George Sewell), with Cristobel, a new baby of dubious parentage. A likeable rogue, Charlie’s soon reconnecting around the neighborhood, although they’re all protectively vague about where he’ll find Maggie. There’s a conspiracy to conceal the truth. He’s misdirected to a rooming house with Sikh and African family-residents. And asks her supposedly former-employers at the Jewish bakery. Meanwhile Charlie’s niece Nellie (Barbara Ferris) and Georgie (Murray Melvin) are tasked with taking the warning direct to Maggie. At first she’s dubious, last she heard of him he was in Venezuela, in the nick, ‘he won’t show up again, not in this manor’. She’s wrong.

The upsurge of gritty working-class film-dramas that shook up the cosy British cinema of the 1950’s led off with angry northern-based ‘Saturday Night And Sunday Morning’ (1960), ‘A Kind Of Loving’ (1962), and ‘A Taste Of Honey’ (1961). If the 1960 play originally-titled ‘Sparrers Can’t Sing’ is a London retaliation, it’s a curiously odd one-off collision between realism and comedy. There’s no trace of dignified leftie idealisation, instead, it portrays an underclass as deviously disreputable as in ‘Shameless’. Equally, although shot at Merton Park Studios with locations in Newham and Stepney using local residents as walk-ons, with even Ronnie and Reggie Kray making a cameo appearance, it’s also stranded far from the ‘Swinging London’ of myth. Pundits who blithely talk today of ‘austerity’ need only glance back at this third-world version of London to see real deprivation. Kids run amok on the wasteground beneath the railway arches. Charlie’s brother Fred Gooding (Roy Kinnear) retreats to the ‘music room’ – an outside bog across the yard, with his newspaper. While the kind of towerblock where Maggie now lives, despised by the 1970’s Punks, are new all-mod-cons in the sky rising above the back-to-back past. The lifts work. And there are venetian-blinds, ideal for signaling to those below. 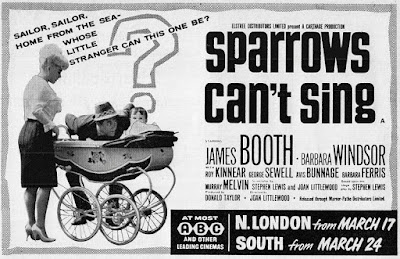 There are two confrontations. Both happen in the kind of pubs that have dart-boards on the wall, and where drinkers do knees-ups to the old Joanna. Charlie waits in the ‘Red Lion’ for Maggie to show – ‘or else there’ll be trouble’, as she gets stranded on a lifting-bridge while heading for the rendezvous! He’s a charmer. ‘There’s only going to be murder, that’s all’ he threatens – only half-joking, ‘I can wring your neck or smash your head in. I’ll cut you up into little Oxo-cubes’ But he works his way around her. Spends £5 buying her flowers from a gypsy. ‘Don’t take liberties’ she warns him. ‘You’ve still got my ring on’ he points out. ‘I’ve been having a good time while you’ve been away’ she scolds him, ‘I’ve gone off you’. They obviously have a volatile history, ‘if I hadn’t liked you I wouldn’t have bashed your head in, would I?’ he reasons. And as she later rationalises, apart from the boozing and his going with other birds, he was ‘right good to me’. While he tells his mates ‘you can’t help but laugh at her, can you…?’ And no, you can’t.

The cast consists of a tick-list of every reliable character-actor familiar from films and TV sit-coms clear across the period. Written by Stephen Lewis, he appears as the whining small-minded health-and-safety-obsessed janitor of Maggie’s Wickham House towerblock, pretty much the same petty official that would define his ‘On The Buses’ role as ‘Blakey’, and later in ‘Last Of The Summer Wine’. A role that he’s rewardingly reprised throughout his career. The bluff inarticulate Arthur Mullard, as drayman Ted, fills the part that would safely see him through a life’s career. Roy Kinnear has a comic window-cleaning sequence that could have been lifted directly from his ‘Dick Emery Show’ sketches. There’s both Brian Murphy and Yootha Joyce of future sit-com ‘George And Mildred’, plus Harry H Corbett, Victor Spinetti, and George Sewell (of kitchen-sink classics ‘This Sporting Life’ (1963), ‘Poor Cow’ (1967) and ‘Get Carter’ in 1971) – all present and reassuringly familiar. The play was first staged by influential left-wing director Joan Littlewood at the ‘Theatre Royal Stratford East’ in 1960, using her Theatre Workshop company, the same cast she’d use for the film. And while grounded in Stephen Lewis’ script, it works as essentially an ensemble piece, using Littlewood’s innovative improvisational techniques. 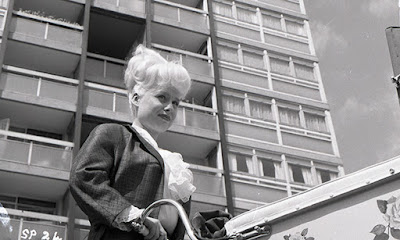 The excellent Murray Melvin had already appeared as the supportive gay friend in Littlewood’s original stage-production of Shelagh Delaney’s ‘A Taste Of Honey’, as well as Tony Richardson’s subsequent film version. And Littlewood’s follow-up project – ‘Sparrers Can’t Sing’, successfully transferred to the West End ‘Wyndham’s Theatre’ in 1961. From where it was picked up by producer Don Taylor, who brought in Stanley Black to score the incidental music, and Lionel Bart to spin the title-song for Barbara Windsor to sing over the credits. For Joan Littlewood, it was not only her directorial film debut, but her only film as director, returning to theatre-work afterwards, and writing credits for ‘Oh! What A Lovely War’ (1969). For Barbara Windsor, it would lead to her first ‘Carry On’, ‘Carry On Spying’ (1964). Generally well-received, this was the first ‘English language’ film to be released in the States with subtitles, leaving the ‘New York Times’ to comment ‘...this isn’t a picture for anyone with a logical mind or an ear for language. The gabble of cockney spoken here is as incomprehensible as the reasoning of those who speak it.’ Well, maybe.

Charlie spends time drinking in a near-empty ‘Kentucky Club’. While she contrives with Bert to get to see Charlie behind his back. She’s torn. She wants to see him, but knows she shouldn’t. If she meets him she’ll only get involved again. Of course, she does. And they flirt in the park. There’s a final showdown at ‘Queenies’ where Georgie sings “My Baby Won’t Rock” with the local band, Eve ‘Queen of the Strippers’ does a turn for the boys, and Maggie drinks Babycham. Then Bert walks in, wearing his bus-drivers uniform, and the rivals for her attention go face-to-face. When Bert asks her ‘what about our baby?’ she shrugs, ‘sorry Bert, you was right first time’. So it’s not Bert’s kid. But as Charlie’s been away two years, it can’t be his either. She tells him as much, ‘who’s the kid?’ he demands. ‘well, it ain’t yours’ she snaps back, protesting ‘I can’t help it if people fancy me’. Charlie threatens to go down the bus depot and let Bert’s tyres down. When Charlie drags Maggie outside she attacks him as a fight breaks out inside the Pub too. The slapstick brawl provides a fittingly uproarious knockabout climax. It’s obvious that dull reliable Bert has lost out to shifty raffish bad-boy Charlie, but he consoles himself by saying he was already resigned to going back to his wife anyway. And Charlie has his conjugal rights to look forward to.

So, it’s not a great movie. And if it represented an opportunity for Babs Windsor to prove she had real acting chops, a missed opportunity too. More a novelty period piece stranded somewhere between the ‘Carry On’ films, and TV’s ‘Eastenders’. 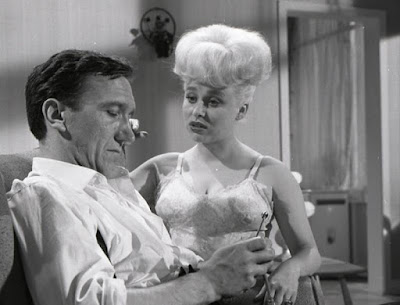 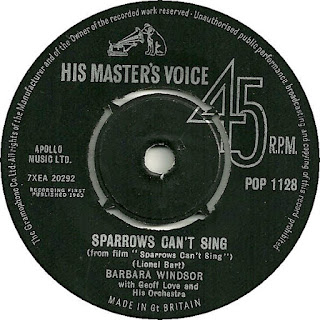 Confusing to those born since, the quote ‘Who do you think you are, Bronco Layne?’ refers to the 1958-1962 ABC-TV Western series ‘Bronco’ starring Ty Hardin, screened in the UK by BBC.

Locations include Limehouse and Isle Of Dogs, while Cable Street and Fraser Street are used with Vallance Road residents involved as background extras 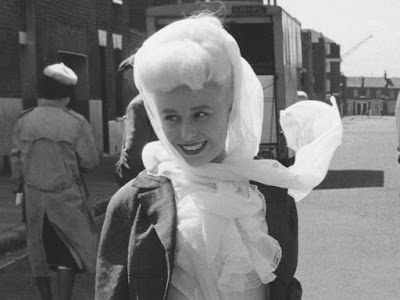 Posted by Andrew Darlington at 19:09

I found the review of this film at: https://cinemahdv2.net/reviews-movie-on-cinema-hd/