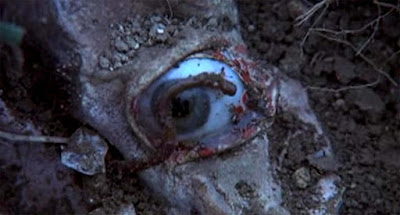 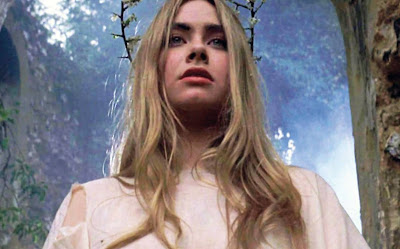 ‘The Devil’s Children…!!!
The Devil’s Touch Corrupts Them…!!!’
When the Judge raises a toast to ‘his Catholic Majesty James III, the King in exile,’ it dates the action to some time after the so-called 1688 ‘Glorious Revolution’, with the Jacobite Pretender sensibly banished to France. But when tousle-haired jolly ploughboy Ralph Gower (Barry Andrews) unearths something strange in his field, it brings satanic manifestations of an even more ancient religious conflict to the surface. Beneath the flimsy veneer of tepid Christianity there lies the more virile rituals of the pagan culture that precede it. Less kill-joy repressive than the dourly pervasive post-Cromwell Puritanism. More attuned to the rhythms of the natural world. And more female empowering. ‘The Grave Of The Devil Is Disturbed’ as the theatrical trailer bonus-feature warns movie-goers.
When Ralph puts aside his flagon and ale, distracted by the agitated attentions of a crow, he finds a skull, a worm curling across its intact staring eye. ‘It weren’t human, sir, it was more like some fiend’ he reports to the Judge (Patrick Wymark in a fine Cavalier wig). The rational Judge is initially unimpressed. ‘Witchcraft is dead and discredited’ he chides the Doctor, ‘are you bent on reviving forgotten horrors?’ The Doctor is not so sure, ‘you come from the city and cannot know the ways of the country’ he explains gnomically, before referring to a dusty old tome, ‘these sages had access to much wisdom’. Well, maybe. 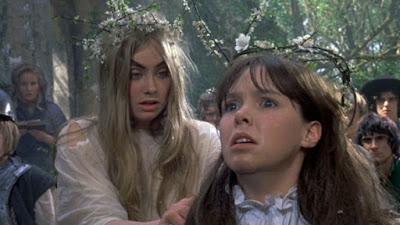 The SF Horror continuum of the 1970s was a deceptively small world. Galaxy-spanning and crossing centuries in time, it nevertheless tended to gravitate around a recurring constellation of activists. Director Piers Inigo Haggard was the great grandnephew of H Rider Haggard who, through a bizarre kind of seven degrees of separation, wrote ‘She’ (1965) which provides the core drama for one of ‘Hammer Studio’s finest late-movies. Piers later worked with John Mills in Nigel Kneale’s SF-TV icon ‘Quatermass’ (1979), with its occult possessed-teens counter-culture overtones. While Patrick Wymark played around Oliver Cromwell twice, in a guest cameo as Cromwell himself in Tigon’s ‘Witchfinder General’ (1968), and as The Earl Of Strafford to Richard Harris’ ‘Cromwell’ (1970). Wymark also featured in Roman Polanski’s ‘Repulsion’ (1965), in cult odditity ‘Journey To The Far Side Of The Sun’ (1969) and more pertinently, in ‘Children Of The Damned’ (1963).
With this highly watchable example of Tigon’s finest, there are connections to be made. Atmospheric, with occasional shock-moments even now, dominated by a strong vengeful Patrick Wymark performance, there are disturbing subcurrents for those who care to look. In this portrayal of a small enclosed community eroded by unreason, all evocatively set to a lush Marc Wilkinson score, there are the same intimations of the dark wells of irrationalism flowing beneath the logical world that you get from ‘The Wicker Man’ (1973). Meanwhile, a touch of romance is provided by dapper pretty-boy Peter Edmonton (Simon Williams), as he brings Rosalind (Tamara Ustinov) home to meet his stern disapproving Aunt. Rosalind is banished to sleep in the creepy attic. Slinking upstairs for a midnight assignation Peter is disturbed by her frantic screaming. When Rosalind attacks the Aunt, despite Peter’s protests she’s hauled off to Bedlam. But as she’s being dragged away he sees she now has a claw where her hand used to be. Distraught Peter investigates the attic, and noticing movements beneath the floorboards he gropes down into the dark, to be seized by a giant hairy claw. Later still he wakes to discover the same claw at his throat. He hacks at it with his knife… and, in a nicely grisly touch, severs his own hand! 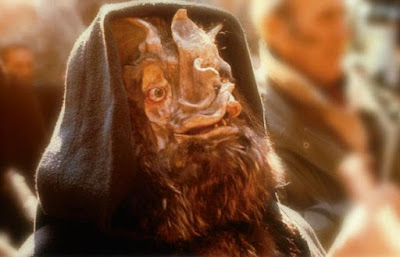 Yes, ‘there’s something very strange afoot’ admits Squire Middleton. And sure enough Reverend Fallowfield’s scripture classes are being disrupted by unruly youth. ‘Angel has taught us some new games’ they snigger, frolicking in insolent ungodly games in the old ruined church where something demonic is taking shape. Angel Blake is leading a kind of ‘Wicker Man’ heathen coven of feral ‘Devil’s Children’. With a ‘Children Of The Damned’ stare, flower-child lure, long white nightdress and painted-on eyebrows that remind you disturbingly of Sylar from TVs ‘Heroes’, she even invites the poor Rev to ‘come play our games with us, sir’, offering the inducement of beguiling full-frontal nudity. When he resists temptation she frames him for sexually molesting her anyway. Angel’s games tend to get messy. Mark is killed. ‘He had the devil in him’ she explains, ‘so we cut it out’. Then there’s Cathy. Angel presides as she’s raped, much to the delight of watching crones. Then Angel stabs her with shears. 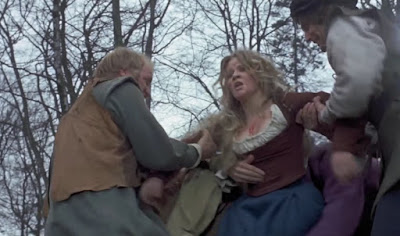 More symptoms are displayed by Margaret ‘the Devil’s Child’ (the lovely Michele Dotrice) who grows a hairy patch on her leg – the ‘Devil’s Skin’. With no Immac available she’s tied down and the Doctor cuts it away. At the last moment the Judge returns, this time in full ‘Witchfinder General’ mode, with a huge mute assistant and vicious dogs to ‘tear the devil’s heel’. This time he’s wiser, convinced of the forces of evil, and embittered. He leads the angry villagers in the traditional Horror-movie procession lit by blazing torches to where Angel is using a nude dancing-girl to entrance poor ploughboy Ralph to cut off his own foot, which has become hairily deformed. It transpires she’s using all these severed body-parts as the final instalments of a demonic part-work Satan assemblage. The Judge wields a huge sword. In jerky freeze-frame slo-mo Angel is kebabbed on a trident and the dark-cowled bat-faced devil-beast is skewered and cast onto the blazing pyre. ‘You see, the way these old superstitions die hard’ says the Judge.
An obvious closing sequence would perhaps show some other tousle-haired jolly ploughboy unearthing something strange in another field, to brings satanic manifestations to a different community, restarting the cycle again. But it doesn’t. 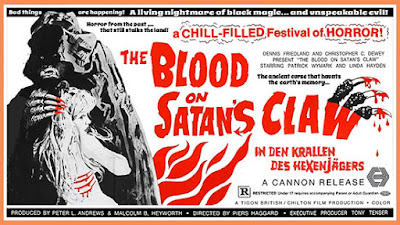 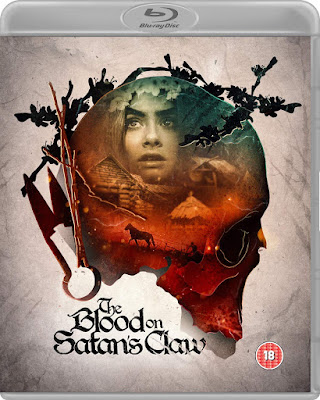 Posted by Andrew Darlington at 19:42