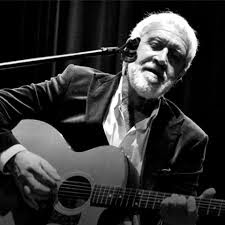 GIG REVIEW OF:
GORDON HASKELL
& ROBBIE McINTOSH
at THE NEW ROSCOE, Leeds
Gordon Haskell: 27 April 1946-15 October 2020
‘I played here as a solo in 1972’ he reminisces. ‘At Leeds University when it first opened. I remember because they had new carpets. And everybody was sick on them. And I thought ‘oh, I see, that’s what you do on new carpets’. I was always like that.’ Then – in 1972, he was like that. Now he is like this. A grizzled Beat poet in a brown leather jacket and a black trilby pulled low. ‘Dressed up special’ he jokes with what I swear is a perfect Tommy Cooper delivery, ‘we’re only in it for the money’. As if. A survivor from 1960s extreme Mod-squad gods Fleur De Lys, psychedelic trippy power-Popsters Rupert’s People and Prog-Rock leviathan’s King Crimson – followed by a long period hoboing in the commercial wilderness, ‘thirty-five years is a long time to wait for a bus’ as he grimly points out on liner-notes. But finally, that bus is here. Probably BBC demographic repositioning is responsible. At first they threatened to make Radio Two a wasteland of Eagles and Fleetwood Mac, but then this had the accidental side-effect of also making it Britain’s most-listened-to station, and a strategic chart launchpad for soft-Rock acts like Shania Twain, the Mavericks, and the Corrs. Ironically, Gordon Haskell has merely become its latest beneficiary. Especially of Johnny Walker’s late-travel-time chat-slot which championed his “How Wonderful You Are” all the way up to a Christmas no.2 – just behind Robbie Williams & Nichole Kidman. ‘I love doing radio (the Johnny Walker interview). ‘Cos it stretches your mind. They throw things at you. It’s interesting to use your intelligence.’ At last – after thirty-five years, Gordon Haskell has become an ‘Overnite Sensation’!
But first up tonight there’s Kwame D ‘from across the Atlantic – Leeds 3’, urging us to ‘enjoy the music’ The programme says ‘think Labi Siffre or Aaron Neville’, he warily accepts the definition, and – with just guitar, voice, and percussion, the similarities are more about the same categorisation-problem as Siffre’s easy songwriterly swing. But they are good songs. And when he does “Don’t Give Up” – about street-sleepers, I can’t help thinking of Haskell’s hobo busking years.
As tonight Gordon performs “Test Drive” – the ‘Oldsmobile’ song which he describes as a ‘pre-Margaret Thatcher electric Blues’, enhanced by shimmering slide guitar from ex-Paul McCartney Band-er and sometime Pretender Robbie McIntosh, to enthusiastic response. It can be found on his rare (and now highly collectible) 1998 ‘Butterfly In China’ album, which also includes Gordon’s version of the Beatles’ “Things We Said Today”. He also goes back to Robbie’s ‘Emotional Bends’ (1999, Vandeleur VANCD005) set, then he does “Voodoo Dance” and “Al Capone” from now, bantering that his performance has ‘always been a little loose round the edges, it’s the only way’, but that’s deceptive. Behind the casual repartee about why there are no birds on the island of Guam, or about Dee – the ex-girlfriend who left him to follow the “Freeway To Her Dreams”, to Acton! ‘acton’ on a hunch?’, there’s the kind of verbal-musical dexterity and assurance you only gather from decades of playing. From the authentically battered country of ‘Freeway’ to the easy jazzy swing of “A Little Help From You” (dedicated to Hoagie and Ian Carmichael), and the James Taylor timelessness and ripples of guitar enlivening “All The Time In The World” (for Ronnie Biggs!), this is slickly clever stuff. He closes with “Look Out, There’s A Lot Of It About” – a ‘Too Much Monkey-Business’/‘Subterranean Homesick Blues’ word-tumble left off ‘Harry’s Bar’ (East-West 2002) because it was ‘too scary’. And I’m thinking, this is music like poetry – to paraphrase Eddie Izzard, only with more notes and less words. But then, some of the words work as poetry too. Here, in this virtual ‘Harry’s Bar’, ‘what does it matter if it’s three or four? I still can’t make sense of it all…’
Posted by Andrew Darlington at 17:36