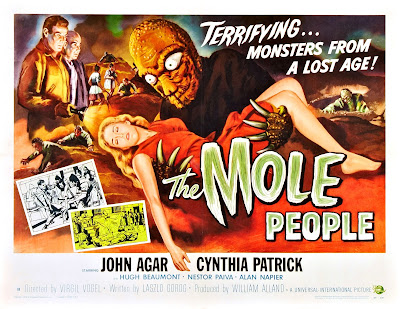 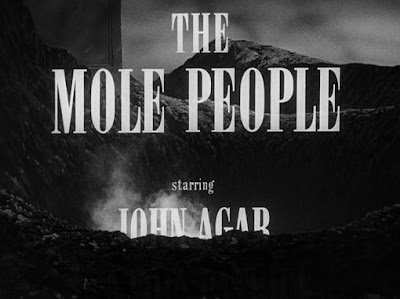 There’s an entire sub-genre of Science Fiction dealing with subterranean adventure, which extends all the way from Jules Verne’s ‘Journey To The Centre Of The Earth’ (1846), through Edgar Rice Burroughs’ fantastic exploits set in the vast Hollow Earth interior-realm of ‘Pellucidar’ and John Wyndham’s ‘The Secret People’ (1935) trapped in a system of caverns beneath the Sahara, into – in movie terms at least, the plunge into the caving splatter-shocker ‘The Descent’ (2005). Among my own favourites is the wonderful “Tumithak Of The Corridors” by Charles R Tanner, a story from ‘Amazing Stories’ January 1932, in which our courageous young hero ventures upwards through endless tunnels from his Lost World towards a devastated planetary surface he’s never seen.
Oddly, there’s also a considerable body of fringe theoretical work that strives to validate such fiction. In fact a certain Dr Frank C Baxter, supposedly a Professor of English at the University of Southern California, is dragged onto the set of ‘The Mole People’ to contribute a pre-credit framing sequence outlining the historical evidence for such unorthodox ideas. There’s subsequently been much film-buff fun derived from debating whether the Doctor is a studio invention, or a genuine academic hoodwinked, or bribed into delivering his to-camera seminary. The consensus seems to be he was genuine, if deluded. But as he tells us, there’s generations of cranks and weirdoes from Dante, to people with names like John Cleves Symmes Jr or Cyrus Reed Teed who’ve imagined the world to be constructed like some kind of Russian Doll made up of a system of concentric spheres, each inhabited by races of people who consider theirs to be the true ‘surface’. Others, including prominent Nazis, have mounted Arctic expeditions hunting the polar openings to a hidden inner Hollow World. So does all this learned dissertation add credence to ‘The Mole People’? Naw, it’s still just enjoyable hokum! 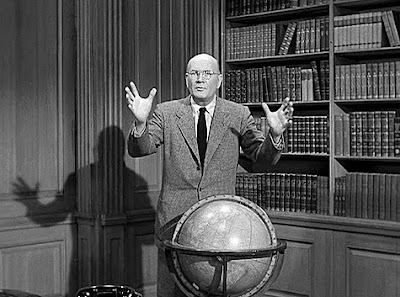 As Forrest J Ackerman wrote on the occasion of its original release, this is a film ‘about an underground movement. It takes place in a subterranean city of lost Sumerians, unfortunately found by a hero-scientist, and abounds with mutants, despots, high priests, sacrificial maidens and all the ingredients that made great serials…’ (in ‘Nebula no.19’, December 1956). He’s right, retro-devotees of the old ‘Flash Gordon’ cine-matinee cliff-hangers will get off on this. The credits-list even dramatically ascends from a seething volcanic crater. There’s an Indiana Jones opener with archaeologists somewhere in a mountainous Himalayan dig unearthing a stone tablet bearing cuneiform script, then an engraved oil-lamp inscribed with pictograms of the ‘Sumerian version of the Ark’. Once deciphered the tablet shatters in a convenient earth-tremor. There’s some talk about the Epic of Gilgamesh, tied in with the 5,000-year-old ‘great flood level’ left by Noah’s inundation. Enough people back then still took that Old Testicle hoopla seriously, enough people maybe to get them onside by drawing that into the film’s mythic stew? But when the character says ‘there must be some rational scientific explanation to this’, there’s the memory of Dr Baxter in his book-lined study chiding ‘this is science fiction of course, it’s a fiction, it’s a fable beyond fiction’.
Following the directions they’ve found, Doctors Roger Bentley (John Agar) and Jud Bellamin (Hugh Beaumont) lead their expedition in a 20,000ft ascent above the snowline towards the distant mountain summit. Firstly an avalanche reveals a human hand in the snow, then they find the ruins of a temple on the plateau. Dr Paul Stuart (Phil Chambers) disappears down a rift, and when the duo descend to rescue him, a further rockfall traps them all. Exploring their new domain they discover they’re not in a natural cavern, it’s been excavated, while strange eyes peer out at them and a deformed hand gropes through a hole in the tunnel wall. Inevitably they find themselves wandering into a vast illuminated cavern with background matte paintings representing the lost city, and suddenly hey, ‘we’re in 3,000BC’. 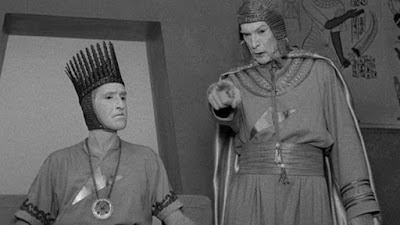 There are people here, of a kind. As they try to sleep, something nasty scrabbles its way up out of the shingle, hoods them with its mole-hands, and drags them down into a cave of misshapen skeletons. These are the buggy-eyed warty-domed ‘beasts of the dark’. Then there’s the city’s pale albino’s who control the mole-people with whips. Oddly, there are Egyptian wall-murals too, a fantasy exotic dancer, and three sacrificial maidens who walk naked into the execution chamber to be microwaved to a crisp, to appease Ishtar’s anger. The subterranean’s enlarged pupils are super-sensitive to light, making Bentley’s torch both an effective weapon, and ‘the fire of Ishtar’ that provides proof of their supposed divinity. As a result they become royal guests, feasting on fungus, cave rat and fish, while the malevolently-suspicious Ming-like High Priest Elinu (Alan Napier), in his fringed helmet and three prongs of wispy beard, fears they’re undermining his power, and schemes to steal the magic torch. 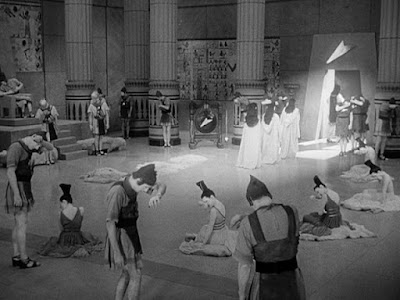 It’s sharp black-&-white film-stock, and although the cast lacks charisma, there’s sparse sharp humour too. As they explore, hunting for an exit to the outer world, the weakened Stuart, in his stylish leather jacket, is killed. He’s laid ‘to rest where he always lived, in the world of the past!’ Then the surviving duo banter ‘why don’t we give up and apply for Sumerian citizenship?’ the other responds ‘I don’t like mushrooms!’ They speculate that the city must have been constructed on a rigid volcanic crust, which then collapsed down into the mountain’s interior. But all the while their democratic all-American values are destabilising a social structure that’s remained intact for five millennia. 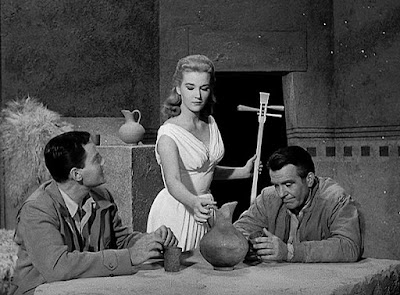 Roger saves serving-girl Adad from a beating. Given to him as a slave she protests ‘free, what is free?’ Then he saves a starving mole-man from a beating, hence encouraging a revolt. Finally Elinu drugs them, steals the torch, and casts them into the execution chamber. Adad leads the freed mole-men to storm the temple where the priest confidently brandishes the stolen torch – only to find it no longer works, the batteries are dead, and they tear him to pieces with their mole-talons. Meanwhile, the duo learn the ‘burning light’ of execution is merely a shaft of natural light from the outside which the subterranean’s pigmentation-lack renders them fatally vulnerable to. But to them – and Adad who is an immune throwback, it provides an escape-climb to freedom. They reach the surface in the nick of time before an earthquake destroys the lost world. Pointlessly it kills Adad too, to little narrative purpose. And only the two archaeologists walk away.
For Universal studios, who’d dominated Horror movies through the 1930’s with Béla Lugosi and Boris Karloff, ‘The Mole People’ was a late attempt to revive their fortunes by jumping the 1950’s SF bandwagon. As such it’s a perfect little Lost Worlds film, an engagingly cranky little curio of interest only to devotees who like that sort of thing. In 1968 a record called “We Are The Moles” by the Moles attracted some attention, largely because it was rumored to be by the Beatles under an assumed alias. It wasn’t. It was by Simon Dupree & The Big Sound, under an assumed alias. 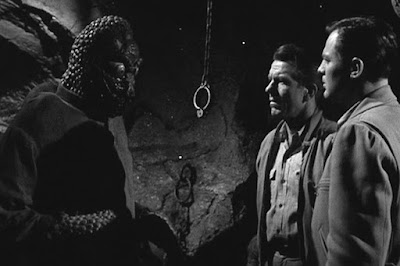 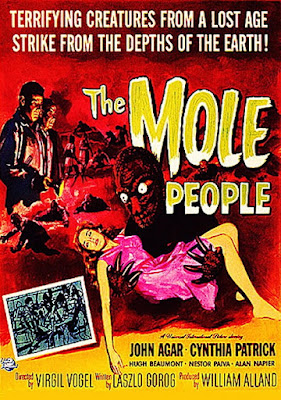 Posted by Andrew Darlington at 17:24