Brian Stableford 'The Werewolves Of London' 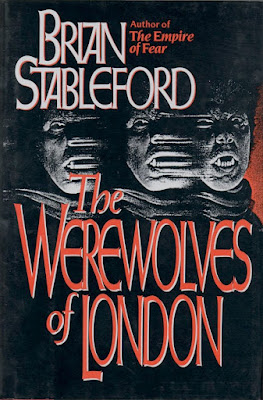 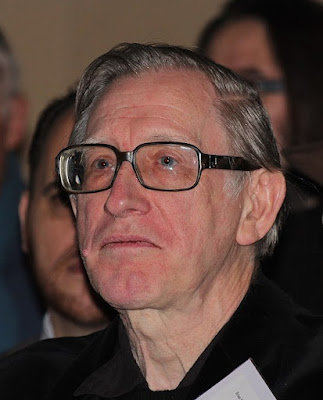 Brian Stableford’s ascent describes a rising curve of breath-catching acceleration. From the inventive Space Operatics of his lift-off to the amazing ‘Empire Of Fear’ (1988), and more recent. Until now – in one feral bound he metamorphoses from vampirism to lycanthropy into quite possibly his most startling performance yet. ‘The Werewolves Of London’ is thick as a brick, densely and deviously constructed, and luminous as predatory wolf-eyes gleaming in the Whitechapel night. The opening sequence is set in Egypt – terrain familiar to the point of cliché at least since Boris Karloff wound on the bandages, and even those elements already re-stir-fried by George Lucas. But by cunningly conniving the Gothic voice and mist-shrouded perspective of 1871, Stableford pre-empts prior texts by the simple manoeuvre of predating them. And as soon as his protagonist suggests ‘we have allowed the romance of Egyptology to infect us like a mild disease’ we know there’s more to the sinister simile than he realises.
But this is not simple slash and rip. Overloaded to the seams with a tumult and turmoil of incident and characters and descriptions as pure as adrenalin, as addictive as uncut Peruvian cocaine, the story rapidly expands to include an orphan possessed by a demon, a levitating Nun, arcane knowledge in forbidden tomes, and an Aleister Crowleyesque sex-magik ritual that turns ‘the design of nature upside down, multiplying perversity in as complex a fashion as ingenuity might permit.’ It goes to the very brink of Hell through Black Mass, brooding apocalypse, the Beast of Revelations, nightmares of destruction… and yes, the lyncanthropic Vargr-folk too who are ‘unquiet for ever’. ‘If there was a truth hidden in the myth’ muses Elinor ‘it is that all men are wolves beneath their masks of painted politeness.’ While ‘the dark streets of London are the greatest wilderness of all and the most perfect hunting grounds’ – a setting for Stableford’s compelling struggles between David Lydyard – infected in Egypt, the Santanist Jacob Harkender, the manwolf subculture, and the conflict of deities they summon or are controlled by in their occult struggle for the powers of the possessed foundling.
And there’s more to the novel than strange narrative. Each elaborate segment is interrupted by fascinating mock-academic side routes into Shapeshifter folklore, for example – did you know that a female werewolf can take human lovers, but a manwolf’s tendency to transmute at the height of passion limits his opportunities? Quoting artfully bogus books and broadsheets, disquisitions on Mr Darwin’s new theory of evolution, René Descartes ‘Suppressed Meditations’, or searingly surreal dream sequences out of fever nightmare, Stableford builds and builds. Perhaps, as he suggests, there really ARE deep-rooted legends of London feral-folk – Warren Zevon’s near-hit single “Werewolves Of London” (also recorded by the Flamin’ Groovies), and the John Landis/ Jeff Goldblum FX-shocker ‘An American Werewolf In London’ (1981) obviously aren’t mentioned, but offer themselves as collaborative evidence.
Pitting Tallentyre’s rational ‘Age Of Reason’ atheism against Stableford’s pseudo-religious concept of ‘enormously powerful entities’ the vortex goes out well beyond regulation horror-fantasy, redefining manwolf mythology as ‘Empire Of Fear’ did to vampirism. He rewrites world history from a bizarre new ‘origin of the species’ populating antiquity with a pantheon of form-changers, ‘Others’, chimeras, gods and demons, until even the prose liquefies, becoming pliable with lyrical convulsions, mind journeys, visions and induced phantasmagoria from impossible worlds. ‘All history is a kind of fantasy’ states Tallentyre, and ‘all fantasy is in its own fashion a kind of history… All fantasy reflects that knowledge, just as all knowledge partakes of fantastic speculation.’
‘The Werewolves Of London’ is a novel that expands your consciousness by grabbing you with a power-prose of feral teeth that won’t let go. 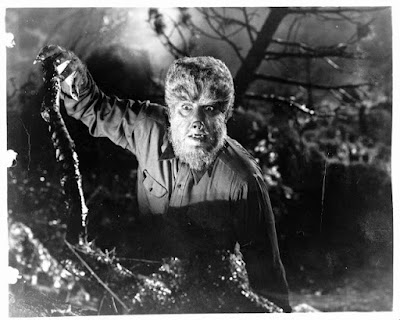 The ‘David Lydyard’ trilogy continues with:
‘The Angel Of Pain’ (Simon & Schuster UK, August 1991, ISBN 0-671-71727-8, and Pan Paperback) and
‘The Carnival Of Destruction’ (Pocket Books UK, October 1994 ISBN 0-671-85198-5)
1966 – “The Man Who Came Back” (‘SF Impulse no.8’, October 1966) Edited by Harry Harrison. Brian had made his pro debut in ‘Science Fantasy no.78’ with ‘Beyond Time’s Aegis’ under the joint alias ‘Brian Craig’, this is his first under his own name, in just over three pages, William Jason’s ship ‘Stella’ was captured en route to asteroid Vesta by alien Slugs and transfigured him. Is he still Jason? Is he still human? What had they done to him? He eventually confesses ‘they killed me…’
1967 – “Inconstancy” (‘SF Impulse’ no.12, February 1967), ‘a brilliant and evocative fantasy by a powerful new writer’, a self-consciously arty symbolist story of three figures on a beach where a village is eroding into the sea, none of them know why they are there or have memories of other lives, they question each other in inconclusive dialogue. Stableford is skilful enough to make this Samuel Beckett strangeness work.
1990 – ‘INTERZONE no.39’ (September 1990), includes “The Invertebrate Man” by Brian Stableford, when Patrick O’Connell’s father says ‘he just ain’t got no backbone’ he takes it literally, and devotes himself to studying invertebrates, which takes him to Baltimore, County Cork in West Ireland to do research with respected expert John McBride at what the locals call the Frankenstein Factory, only to learn that McBride is secretly breeding giant insects in a basement lab. When local rivalry breaks out and the lab catches fire Patrick discovers his spine by heroically rescuing a baby and McBride from the blaze.
1994 – “The Unkindness Of Ravens” (‘Interzone no.90, December 1994) a brief charming tale in which ravens intelligence-levels are experimentally raised to the point they devise their own escape. One named Edgar (one of a number of Poe references) returns to ask if the changes will be genetically passed down to their fledglings. It will not.
1997 – “The Pipes Of Pan” by Brian Stableford (‘Magazine Of Fantasy And SF’, June 1997) Wendy had been thirteen for thirty years, now she’s been unthirteen for four months. In a future of immortals, children do not grow beyond a specified age, until the Progeria virus causes a disturbing – and possibly illegal puberty. A clever and sensitively-told tale. 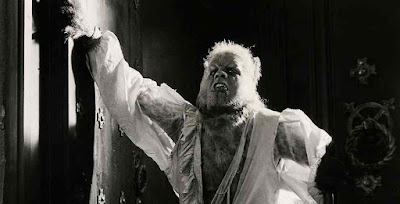 Posted by Andrew Darlington at 13:41