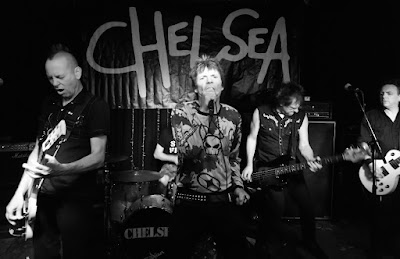 ANARCHY IN THE ‘UNITY HALL’
Gig Review of:
ANTI-NOWHERE LEAGUE
with CHRON-GEN and CHELSEA
at ‘Unity Hall’, Wakefield, Yorkshire
16 May 1982
A chronic degeneration ago Sid Vicious died that we might live. Gene October was there in that first furious thrash of Punk and he’s here now, slogans and chants still intact, a shouting artefact, a tenacious strand connecting the then to the now. Not that it’s fair to overstress genealogies but this moving lumbering Punk ghetto is being loudly promo’d as the logical successor to the Sex Pistols Anarchy package of 1977, and comparisons – if odious, tend to present themselves unbidden. Chelsea, for example, bellow “War Across The Nation” with the sharpest cleanest new wave chords in the skrewed-up Steve Jones surgical-strike tradition – and it persists in coming on just as multi-volt electrifying, Nic Austin’s lead and Linc’s bass are worn low-slung with October draped over the mic, powerfully built, short ragged black hair, patterned shirt half out of his pants, ignoring the gob-hail like the seasoned campaigner he is. Even his lengthy harangues against Margaret Thatcher, and his part-patronising unemployment rant during “Right To Work” is historically in context. ‘I know a lot of you out there aint’t got no jobs, right? And they call you scum, don’t they? But they don’t fuckin’ understand, they don’t understand.’ 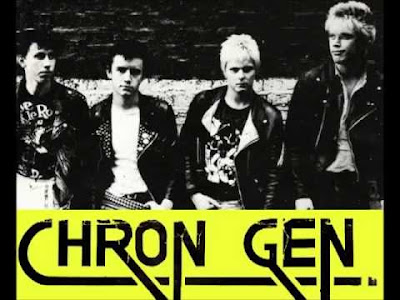 Yet if this diatribe-ing overextends the numbers, once they’ve quit the stage leaving dropped guitars howling and shrieking metallic feedback… then the Hitchin band Chron-Gen redress the balance. They ram each jab short and fast from “Prophets Of War” through to the encore of Chinn-Chapman’s “Living Next Door To Alice” (what price New World now, eh?). ‘I’m a member of the chronic generation, it’s getting me nowhere, it’s full of complications.’ There’s a look of early Sham 69 about vocalist Glynn Barber, from sweatband on down, the same cocky Jack-the-Lad rapport, an easy insult taunting with the front couple of rows that comes across well, and the numbers, all careening and riff-based, manage to inject a freshness into what, from lesser plectrums, can be a stale and limited form. Stand-outs are “Subway Savage”, “Outlaws”. And Captain Sensible’s humorous “Jet Boy Jet Girl”.
They also do one called “L.S.D.”, while the Anti-Nowhere League do a cocaine anthem “When The Snowman Makes Me Happy” – so where exactly does a hippie and a snob’s drug slot into Gene October’s ‘we’re all working class, right’ scenario? Top of the bill, and currently greediest in Indie chart-grabbing stakes, the League themselves are farthest from roots. Crude, mindless, filthy, horrendous, degenerate, wrecked, perverted, snarling, vomiting great mouthfuls of lager over the audience, f’-ing, lycanthropic, moronic, grotesque, spasming and writhing, there’s Animal (Nick Culmer) biting, crunching and chewing what purports to be lyrics – ‘we shout but no-one cares, we shout but no-one listens’ he apes, but ‘for you – I’ll be your SAVIOUR!’ The kiss of a comic-book Satan. A cross between a Hammer films Black Mass manifestation and a deranged fanged Muppet. “We Are The League”, a manifesto of over-acted outrage. Top-hatted guitarist FS Magoo (Chris Exall) gurns and scowls, a villainous Dickensian idiot. “I Hate People”, “Let’s Break The Law” has Animal stroking his metal-studded codpiece with mock-lecherous lewdness. And then, casually and with ease, they drop the hand-grenade that is “Streets Of London” into the lacerated landscape. Is this an ironic retread of the every precinct busker’s standard, or a bizarre recognition that just perhaps Bedsit poet Ralph McTell was onto something after all? Their tedious attempted menace slots more easily – visually and vacuously bombastic, into the Heavy Metal overkill of the Ozzy Osbourne’s, Ted Nugent’s and Iron Maidens.
Yet the gob goes on, even after two hours the kids can still not only generate fresh saliva, but also achieve a quite a respectable trajectory angling into the lights in a rain of silver constellations. We walk on crushed beer-cans, beer foam explodes and ejaculates across the floor. From the history of Punk in microcosm, this is Punk 1982, with Sid Vicious a long time dead… 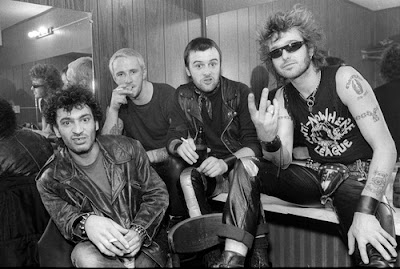 Posted by Andrew Darlington at 17:54