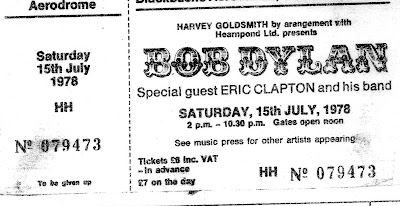 a once-and-future private aerodrome at

Camberley on the Surrey-Hampshire border.

And joy it was to be alive, and there to see it all…

He’s laid spread-eagled on the grass, wrapped in a Union Jack, comatose. Blonde, and spaced to everything. You think… why? He’s paid his £6 in advance, or maybe £7 at the gate for this once-in-a-lifetime event, joy it is to be alive at this moment, and he’s too out of it to know. Gates open at noon, we arrive early. After staying overnight in Almondbury, we travel south with Dix behind the wheel, driving me, with Rita and Steve. Steve keeps pointing out ‘hey, there’s a picturesque country pub, we could stop for one’, and each time we do I’m thinking ‘yeah, we can visit quaint little country pubs anytime… but this is DYLAN!’ Itching to move in a frantic kind of boring. Can you tell me where we’re headin’, Lincoln County Road or Armageddon?, we’re three miles from Camberley on the A30 London-Southampton road, and start seeing itinerants for miles around. This is the year of Punk, there are splash-paint signs pointing ‘HIPPIE’S GRAVEYARD’, maybe they’re right. But it’s a great and groovy graveyard.

Eric Clapton plays a black-&-white Fender and tries to sing “Cocaine” with a cig in his mouth-corner, “Lay Down Sally” with Mercy Levy harmonies, and a blistering “Badge”. He even does Dylan’s “Knocking On Heaven’s Door”. Later, he joins Dylan on-stage for “Forever Young”. Strangely I have little memory of it. Not really been into anything he’d done since… um, since that Delaney & Bonnie record. Maybe punk conformity blanks him out, like the Union Jack guy? Or maybe we were in some country pub while his guitar gently weeps? I considered bringing a tape machine, but decided no, security won’t let it through. But once inside there are batteries of them, some NASA-like mobile recording studios, tripod-mounted furry-mics spooling it all in. It’s tempting to walk past them, one-by-one, declaiming enigmatic runic Dylanesque mutterings into each. Despite it all, the only ‘Blackbushe’ 3CD bootleg I’ve found is pretty lo-fi (the German Wanted Man WMM 24/25/26, 1993). Atmospheric, but poor sound. Spliffs too. A low cumulus of dope. All you need do is walk and inhale. It later turns out there are thirty-six arrests, six for theft, six for bootlegging tickets, and twenty-four for drug offences. Joan Armatrading on stage now, lost in vastness as light laces higher. “Love & Understanding” and “Down To Zero” swelling like soap-bubbles bursting in the sun.

Driving into the 23-acre ‘Dylanville’ compound, in surreal juxtaposition there’s a line of camouflage-grey World War II aircraft, huge Jurassic bombers rearing above grass, runway tarmac and rivers of assorted miscreants. Death-planes that refuse to turn into butterflies above our 200,000-strong nation. The biggest single-day event to date. Harvey Goldsmith Inc has lined up acts from 02:00pm – the jostling reggae of Merger licking like a friendly puppy then doing “Biko” dedicated to the oppressed of Africa, the Anglo-German Lake running CSN&Y harmonies over prog noodlings, Graham Parker & The Rumour roaring into “Hey Lord, Don’t Ask Me Question” with sparks glinting on his heels. Ringo Starr is rumoured to be here, Bianca Jagger, Billy Conolly, Susan George and Jennie Agutter. But Martin Carthy and Woody Guthrie’s widow Marjorie too. The south-wall toilet facilities are a tented water-sculpture constructed of dripping overflowing gutter-ways interconnected to slopping oil-drums marooned in a wetland of yellow mud. I find a trove of SF paperbacks squirreled into the palisade – JG Ballard, Robert Silverberg, and stuff them in my jacket.

Back at the soundstage, visibility is less than good. Sight-lines confused by ‘Desolation Row’ pennants, big-hat picnickers with kids and miniature stoves. No video-screens. On the way out afterwards you sneak-hear meaning-hungry people debating whether or not Dylan was wearing a hat. He was. A hat with a cockade, and 1966 shades to provide refuge. But it’s telling that they couldn’t tell. Everyone has a different perspective on it, but with footage playing over and over in your head, everything is heightened. Dylan’s set opens with an instrumental “My Back Pages”, the man arriving virtually unannounced from the back-stage leading into a cover of bluesman Tampa Red’s “Love Her With A Feeling”. Then, glasses-off but eyes closed, he spits and slurs his new single “Baby Stop Crying” which – on the back-of this event, climbs to no.13, making it his final UK Top Twenty hit, so far. He doesn’t speak much, little more than ‘thank you, we’re starting to get going’. Then ditches guitar, in favour of holding hand-mic and harmonica for “It’s All Over Now, Baby Blue”.  Determinedly going ‘over the top’ I trek the near-half-mile through the carnage of sleeping-bags and body-clusters, fighting through to the front. To the post-‘Rolling Thunder’ stage cluttered with snarls of tangled wiring. The closest to a Big-Band Dylan we’re likely to get. Most personnel remaindered from the ‘Street Legal’ sessions, Steve Douglas’ wailing bluesy horns on “I Want You”, Billy Cross lead guitar, Alan Pasqua’s keyboards, Bobbye Hall percussion and Ian Wallace on drums.

The vocal back-up trio modelled on Bob Marley’s ‘I Three’ - midpoint Dylan steps back for them to solo ‘’cause I’m getting tired’, Carolyn Dennis does Sam Cooke’s “Change Is Gonna Come”, Helena Springs dances and moves around the stage as she does “Mr Tambourine Man”, and Jo Ann Harris sings “The Long And Winding Road” (earlier the girls repeat Dylan’s lines ghosting “Like A Rolling Stone”). ‘And now the genius’ says Dylan, and the Alpha Band’s Steve Soles, on rhythm guitar, does a solo spot with “Laissez-Faire”. After his long wilderness years, Dylan had re-established his mystique with ‘Blood On The Tracks’ and ‘Desire’, with ‘Street Legal’ impending, the set is strewn with its cuts. “Señor (Tales Of Yankee Power)”, and the smooth pure horns of “Is Your Love In Vain” smearing into the air like warm oil, about as perfect as sound can get, ‘can you cook and sew, make flowers grow, do you understand my pain?’ Still amphetamine-skinny, scarecrow-haired and Rimbaudian, black jacket, a lightning flash down his twitching insectoid pants’ leg. He plays electric Fender Strat, switching to acoustic with harmonica-harness for “Gates Of Eden” in blue spotlight pool. He’s the postman, so he says. The guy who delivers, songs. “Ballad Of A Thin Man” starts with his voice alone, before the band phase in, Billy Cross’ demonic guitar kicking against the organ. In a natural light-show of spectacular sunset etching the stage-profile into the sky. Bonfire beacons across the enclosure. As Steve points out, he uses the Hendrix ‘Electric Ladyland’ arrangement of “All Along The Watchtower” – making him possibly the first artist to do a cover version of one of his own songs, albeit whipped up by David Mansfield’s violin, Dylan replacing his previously discarded top hat. After the rasping nasal whine of “All I Really Want To Do” Dylan does the band intro’s, then into a cranked-up consciousness-stream “It’s Alright Ma, I’m Only Bleeding”. “Forever Young” delivered, or interpreted as a defiant generational anthem. Closing with the wild high mercury sound of “Changing Of The Guards”… and “The Times They Are A-Changin’”.

Dix knows the new tracks already. I buy the album the next record shop I encounter. Heading back for the car, glancing at my notes, I’ve written ‘blazing airships consuming the night, metallic dandelion-seeds spiralling down across the sky, two-tone siren horsemen howling, wading through elfin-pools of piss and tin-cans cranked up high on electric decibels’ - what the hell does that mean??? Does Dylan himself get into similar conundrums with his own lyrics? As we leave, down moonlight lanes into a six-mile traffic tailback, the ‘blonde & spaced’ dreamer is still laid there, still wrapped in the Union Jack, tightshut lids, sleeping under strange strange skies a-spin with glints of whirling seeds. And he’s missed it all…

Full Running Order: “My Back Pages” (instrumental), “Love Her With A Feeling” (cover of Tampa Red song), “Baby Stop Crying”, “Just Like Tom Thumb Blues”, “Shelter From The Storm”, “It’s All Over Now, Baby Blue”, “Girl From North Country”, “Ballad Of A Thin Man”, “Maggie’s Farm”, “Simple Twist Of Fate”, “Like A Rolling Stone”, “I Shall Be Released”, “Is Your Love In Vain”, “Where Are You Tonight (Journey Through Dark Heat)”, “Change Is Gonna Come” (sung by Carolyn Dennis), “Mr Tambourine Man” (by Helena Springs), “The Long & Winding Road” (Paul McCartney song sung by Jo Ann Harris), “Laissez-Faire” (Steven Soles solo), “Gates Of Eden”, “True Love Tends To Forget”, “One More Cup Of Coffee”, “Blowin’ In The Wind”, “I Want You”, “Señor (Tales Of Yankee Power)”, “Masters Of War”, “Just Like A Woman”, “To Ramona”, “Don’t Think Twice, It’s Alright”, “All Along The Watchtower”, “All I Really Want To Do” – Dylan does the band introductions, “It’s Alright Ma, I’m Only Bleeding”, “Forever Young”, “Changing Of The Guards”… “The Times They Are A-Changin’”