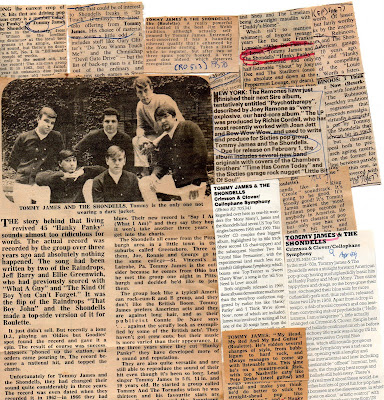 by TOMMY JAMES & THE SHONDELLS

“Mony Mony” – oh yeah. But Tommy James and his Shondells were more than just bubble-pop. “Crimson And Clover” is classic late-psychedelia, overloaded with shuddering reverberating echo-phasing that sounds even better in cleaned-up digitised CD-format than it ever did on my scratchy-scuffed seven-inch vinyl. As the Simpsons Otto-man tells it ‘I don’t need drugs to enjoy this. Just to enhance it’. The single, a US no.1 to boot, was edited down from sessions that produced two electricity-drenched albums – ‘Crimson And Clover’ and ‘Cellophane Symphony’, both here on a single-CD, both issued in 1969, and both shoving whizzy studio technology to the edge with reverse-tape gibberish and much use of the newly devised moog synthesiser. Is ‘hello banana, I am a tangerine’ profound, surreal, or just silly? the result of overdosing on too much “I Am The Walrus”, or too much of Dr Leary’s Special Brew? The first album is more Pop-friendly, with “Kathleen McArthur” – a poor-boy rich-girl love tryst, “Do Something To Me” retaining something of the ‘Hanky Panky’ bounce, and “Breakaway” even extending into fuzz-guitar Temptations-style funk. Then “Crystal Blue Persuasion” is another hit single, with more than a taste of the Young Rascals Latin “Groovin’” groove, or maybe the spooky Classics Four. The second set, opening with a denser more ‘conceptual’ 9:38-minute head-music foray into early Floydian cosmic moods, and leading into the trippy heavy-osity of “Changes” with its lyrical pseudo-profundity, is slightly less wacky fun. Until picking up with the quirky “I Know Who I Am” detailing Tommy’s adventures with an ugly groupie, and a man with chapped lips who smiled and almost bled to death! Pausing only to bring on the crippled monkeys and a John Wayne impression, the album closes with a riotous spoof-retirement party, “On Behalf Of The Entire Staff And Management” which disintegrates into laughter and raucous silly-voice abuse. Maybe it’s satire on the corporate mindset, maybe it’s just daft. Whether an astute shot of commercial opportunism, a genuine attempt to escape from ‘Mony Mony’ bubble-pop and gain the respect of his peers, or a cool fusion of the two, it works for me.

If you are searching for the best Bitcoin exchange company, then you should use YoBit.

On Free Bitcoin you may get free bitcoins. 8 to 22 satoshis per 5 mins.

Are you tired of looking for bitcoin faucets?
Double your claiming speed with this advanced BTC FAUCET ROTATOR.

If you're trying to buy bitcoins online, Paxful is the best source for bitcoins as it allows buying bitcoins by 100's of payment methods, such as MoneyGram, Western Union, PayPal, Visa, MasterCard, American Express and even converting your gift cards for bitcoins.

Can’t believe you have put it so well that even a newbie like me can understand it. Many many thanks.

I think among his songs there are some that I will always love.