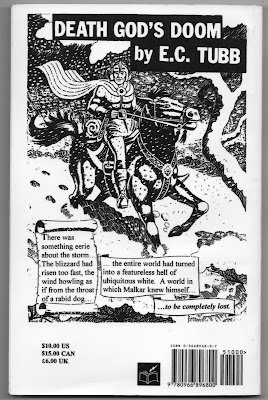 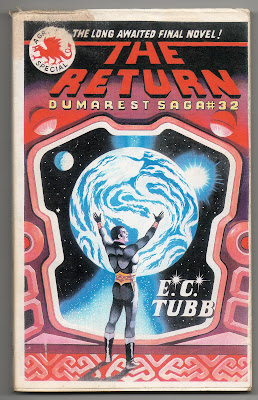 Book Review of:
‘DEATH GOD’S DOOM’
(Cosmos Books – ISBN 0-9668968-0-7 – £6/$10)
& ‘THE RETURN:
DUMAREST SAGA no.32’
(Gryphon Books – ISBN 0-936071-83-4 – $20)
by E.C. TUBB
Tavern. Serving Wench. Enigmatic Mercenary with a mythic past. A Merchant ‘more bone than flesh’. Then a magical quest to find ‘Gualek The Golden, the City of Eternal Life lost in far ensorcelled Dashkit’. All predictable heroic fantasy ingredients at least since Robert E Howard first marketed the Conan franchise. Through Fritz Leiber’s mischievous ‘Ffahrd & Grey Mouser’. Until it explodes graphically into ‘2000AD’s Slaine, via Michael Moorcock’s doomed albino anti-hero Elric Of Melnibone. But those who know EC Tubb only through his long-distance ‘Earl Dumarest’ hyper-romps – or those who caught TV’s ‘Space 1999’ re-runs (he wrote some spin-offery for that too), might be unaware that in the 1950’s when Tubb’s domination of domestic pulp SF was virtually complete, it was he who first created a character called ‘Elric’. But this, he concedes generously, was probably just ‘a coincidence’. EC Tubb is now eighty, yet shows few signs of reducing his phenomenal creation of fictional worlds. Malkar’s fantasy medievalism was first glimpsed in Sam Moskowitz’s legendary ‘Weird Tales’ in a story editorially compared to the very finest of CL Moore. Now Malkar gets re-animated at (slim) novel-length, to battle the Elkite Pirates until ‘the deck ran red with blood that dripped into the sea where the creatures of the deep waited to feast on human flesh...’, and then penetrate a besieged city only to find himself trapped between dimensions by the satanic Lovecraftian demon-deity Phang. While the incidental death-toll multiplies at an absurdly horrific rate. Malkar’s entire company get monstrously-massacred – against the reader’s expectations, on two distinct occasions, and Malkar’s sole concession to human compassion reduces down to slaughtering the wounded to ‘end their suffering’. Death? ‘what matter when men are so plentiful?’ asks Seer logically. And although these escapades are eminently readable, Malkar never actually gets to reach his Lost City, it says so on the book-jacket so no plot-secrets are betrayed by so revealing. Tubb – it seems, is already saving Gualek for the soon-come sequel – ‘The Sleeping City’.
But as new hugely oaken gothic doors creak open for Malkar, they seem to be finally closing on Earl Dumarest. Since he first rose ‘through interminable strata of ebony chill to warmth, light and a growing awareness’ in ‘The Winds Of Gath’ (1967) the star-lost Dumarest’s quest to re-locate mythic Earth through galaxies of strangeness and Space Opera heroics was spun out on a two-books-a-year schedule throughout much of the 1970’s. Until the unpredictable vagaries of publishing, rather than the hideous machinations of his Cyclan cyber-adversaries brought the cycle to a premature end... if, indeed, thirty-one volumes later can be described as ‘premature’. Yet Tubb himself, and Dumarest-ophiles – who remain legion, continued to need the full closure that only Dumarest setting foot on Terra could provide. Hence ‘The Return’, rescued from a rare 1992 French-only edition, and wrapped in a new Ron Turner art-embellished English (and American-language!) format for the first time. So here is an older, meaner, more ruthless Dumarest, so close to journey’s-end that he’ll allow nothing to stop him. First escaping from what the computer-for-brains Cyclan calculate as a 99% probability of nuclear incineration, and using Raniang co-ordinates salvaged from the Cerevex Temple in ‘Dumarest 31: The Temple Of Truth’ – Dumarest planet-hops from fragrant Arpagus to the Space Scavenger’s world of Kaldar in the Lonagar Drift in the devious company of the beautiful but deadly Zaheva Postel. He kills Toibin in a knife-fight, to avenge the death of Dren Ford, thereby acquiring the Geniat, a Kaldar ship – and then it’s via stop-over journey-bites to encounter the lethal secret of ancient Fionnula – ‘redolent of decay’, to... well, Earth. But there’s time for a partial re-union with long-lost love Kalin of Solis (‘Dumarest 4’) and a final Cyclan face-off. So there’s some tying-off of loose strands. But not all. Tubb leaves questions dangling, and... without giving too much away – he never actually gets to land on Earth. So there’s still a potential ‘Dumarest 33’ lurking in there. Meanwhile, Tubb’s universe remains cruel, mean-spirited and unrelenting, as physically punishing as it is unforgiving. And there’s little in the way of cutting-edge high-tech hardware either – star-charts are listed Yellow Pages-style in printed almanacs, they still use radios, and its politics make Brute-Monetarism seem like a rest-cure, with just a slave-economy there for losers. His Raiders are strangely stylised pre-Mad Max curios who manifest villainy by singing raucous songs in taverns, and even gender roles are monochrome traditional. You suspect this is not deliberate retro, although it could be read as a kind of ironic post-modern 1950’s Steampunk-variant. Transistor-Punk perhaps, or SF-at-78rpm? You don’t come to Tubb expecting sophistication, but sometimes you get it anyway. You do come to Tubb for superlative story-telling skills. And that always comes as a given. At eighty years old, the man his biographer named ‘The Tall Adventurer’, can still be awesome.

Order a Sparkling White Smiles Custom Teeth Whitening System online and SAVE BIG!
* 10 shades whiter in days!
* Professional Results Are Guaranteed.
* As good as your dentist.
* Same as dentists use.