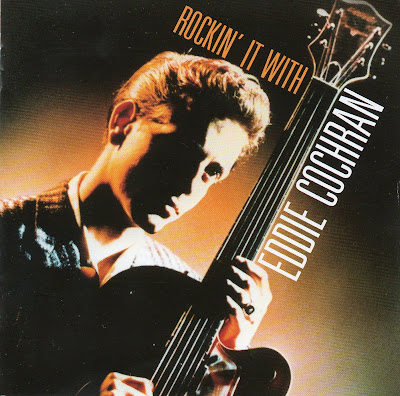 Album Review of:
‘ROCKIN’ IT’ by
EDDIE COCHRAN
(Thunderbird CD0013) www.t-birdrecords.com
Writer Mick Farren claimed the lines ‘I called my Congressman but he said, quote, I’d like to help you, son, but you’re too young to vote’, constitute the first genuine political Rock ‘n’ Roll statement. Well, maybe. But as an early Rocker with an abbreviated life-span Eddie did pack a lot into his years. Valuably, the Rockstar label ransacked his posthumous archives, salvaging raw and curious formative stuff, session work, studio try-outs and instrumental blue-prints into a series of albums, the best of which forms the source for the thirty tracks collected here. The earliest, “Hearts Of Stone”, is a two-track home recording done at Chuck Foreman’s home in Bellflower, LA, when Eddie was just fourteen. Soon, he was making himself a useful guy to have around, not only adept at fingering a fretboard, but picking up and adapting new-style techniques that gave him a session edge. Eddie’s big Gretsch guitar was gainfully employed around local shotgun studios, where he became familiar with the tricks involved in shoving primitive dubbing technology beyond its natural limits. While sitting in on songwriter demos too. A session for the Bo Davis ‘A’-side “Drowning All My Sorrows” is a Sun Rockabilly version of “Heartbreak Hotel”. Producer and long-term collaborator Jerry Capehart’s Western Swing version of “Latch On” is evolved into proto-Rock by the Cochran Brothers, with Eddie’s grunts and back-chat. Despite not being real brothers, the duo formed a convenient vehicle and a Rocking proposition, no harmonies, but instead trading lines and contra-lines with “Slow Down” and the lost ‘A’-side “Tired & Sleepy” about ‘an uptown cat living in a crazy pad’. Eddie’s first US Top 20 single “Sittin’ In The Balcony” – no.18 in March 1957, appears as a live TV version. Endearingly, as he’s smooching his girl through the movie they ‘stop loving to watch Bugs Bunny’, before resuming again. This is not a hit’s compilation. Which is not to say there’s not brilliant stuff. “Mean When I’m Mad” is moody macho posturing, “Pink-Peg Slacks” borrows its sartorial style from Carl Perkins. “Cruisin’ The Drive-In” is irresistible teen Pop-Rock. And “Nervous Breakdown” is not only a dry-run for the three CF&G riff-chords of “C’Mon Everybody” but the ‘no more cruisin’ for a week or two, no more runnin’ round with the usual crew’ lyric too. As a bonus there are four strong live hit performances from Jack Good’s TV ‘Boy Meets Girl’ show in early 1960, just three months before Eddie’s fatal A4 collision. It’s a cliché to ask what might have been, but on the evidence of this career overview his prolific talent and voracious appetite for experiment was on a stratospheric rising curve when it was abruptly terminated. “Summertime Blues” has since been blustered and inflated into Pomp by the Who. “C’Mon Everybody” and “Somethin’ Else” done with snotty comic-menace by Sid Vicious, more in line with Malcolm McLaren’s masterplan of integrating Punk into long-term insurrectionist tradition. But no-one’s ever bettered Eddie’s originals
Posted by Andrew Darlington at 16:00