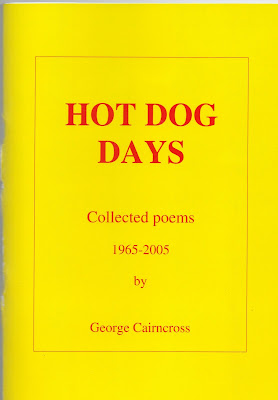 Book Review of:
‘HOT DOG DAYS:
COLLECTED
POEMS 1965-2005’
by GEORGE CAIRNCROSS
(Fiasco Publications, 31 Belle Vue Street, Filey,
North Yorkshire YO14 9HU, £3.50p)
Filey is a Pop Art sort of place. Dark skies. Relentlessly bright spiral-displays of postcards. Gaunt hotels. Warm fish ‘n’ chips. Where oldsters retire to. Where blue plastic buckets-&-spades sway suspended from shop awnings in salt North Sea breeze. And George Cairncross. A kind of Renè Magritte double-take in a Gents Outfitters-cum-Militaria, catering to day-tripper needs. His flat above exploding with pin-up collages, the tang of spirit-duplicator fluid, and poems punched out on a typewriter that perforates ‘o’s into neat round holes. His magazine ‘Bogg’ began irreverent, oft daft, always fun. Not quite how it wound up, guided by other hands, across the Atlantic. In the 1970’s it was a ‘Beano’ among poetry journals. Which is why it worked. Why it reaped contributors and held them with unique gravity. Each issue a party. A raucous disreputable gathering of mates and in-mates, yet ever-welcoming to anyone open to it. A Punk ethic before its time, a DIY everyone-can-do-it that nevertheless sucks in and nurtures fine poets. That’s quite something. George was ‘Bogg’. He was also much more. He splurged out absurdist samizdat novels circulated for the asking. Sure, he could be found between Corgi paperback covers (‘It’s World That Makes The Love Go Round’, 1968), and infiltrates the likes of ‘Gargoyle’ (USA), ‘Next Wave Poets’ and everywhere beyond too. But he’s always an unmistakeably distinctive voice. From page one in, from the first 1965 poem, it’s George Cairncross. Could be no-one else. An aspect more important for a poet than just about anything else. Sometimes you think Adrian Henri, or maybe Roger McGough in ‘the bedsprings sing like a thousand canaries on the mantelpiece disguised as sparrows’. Or maybe wider Mersey-wise references. The economical contractions of ‘silverswept streets’ or ‘smokedust’ sky, added to the Beat phrasing of ‘the mad, bad tumbledown streets of the dawntime city’. But no. Playful humour, wistfully accessible, yes. Words that work live. With punch-lines. But off into his own tangent. I remember these poems. They seem so simple. Yet work like precision ordnance. Try replicating it. You can’t. I know. I’ve tried, and failed. Few, if any, fail here. “I Have Declared War On The Government” is a repeating riff, each verse a Peter Blake assemblage populated by image-snatches from things you knew but never knew you knew. “One Of These Days” starts out hearing the sounds of revolution in the suburbs, and ends up mere short stabbing lines later, sitting in the park, half-fearful, half-exuberant, awaiting its detonation. Elsewhere the revolution is frittered away ‘somewhere between The Black Horse and The Stalwart Grenadier’, in pub-nights spent ‘arguing anarchism with a bunch of Marxists, and not really caring anyway’. But caring, despite it. His poems come furnished with fruit machines and MenMags. Bert Weedon and John Wayne. Jazz and the City Varieties. A flowered bra that swings on the bedrail, like a field of unplucked marigolds. A nightingale dropping acid in Berkeley Square. Simple is the hardest thing. Piling on complex densities of allusion and literary effects is easier. Strip it back to its conversational hub, it works better. He near-stumbles with the sixtiesish ‘flickering fogbeams of my mind’, but retrieves it with the jingle ‘superfine sunshine shines forever’. He sees Aphrodite in a sports car, and discovers she’s just a girl from Birmingham. His Lit-heroes Kelly & Sheets are, of course, a malapropically-reconfigured version of ‘Old-Time Romantics’ Shelley & Keats. Whatever happened to them? like an out-dated Music Hall double-act they’re lost where ‘stanzas are dying of blank verse’ and ‘empty words with vacant signs cannot hide in the mist’. By way of contrast, he sketches himself as the grubby frayed poet with nothing to give ‘but the rainbows in my pen’. Glancing to uncertain posterity he offers up a spoof-prayer to a god who some say is dead, but he says was never alive, a prayer to not forget your old mate George. Give him a fighting chance. Or at least a five-yard start to the pier-head. Yet the final poem finds him the last poet, survivor of the swinging sixties cast up in 2005, obsolete typewriter forgotten in the corner, under a layer of dust. Nothing left to say. There’s plenty said here.
Posted by Andrew Darlington at 15:13

Didn't mean to be anon. Is George still writing?