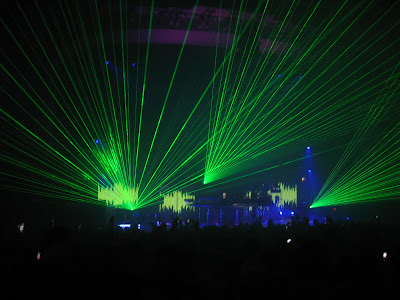 Gig Review of:
CHEMICAL BROTHERS
and others at READING NORTH /
LEEDS ‘99 FESTIVAL
Temple Newsam Park, Leeds
Hey Boys. Hey Girls. Think the unsayable. Say the unthinkable. I’m watching the original guitar-torturing junkie intensity of Red Hot Chili Peppers’ “Under The Bridge”, but prefer All Saints dance-friendly chart-blandout version. It must go back to those wretched Cock-Sox promo-snaps, because I can never take the Chili Peppers as seriously as some sections of the music press seem to think I should. Isn’t all that sweaty bare-chested mouths-like-catflaps Rock-power just a little too retro? and St Shaznay’s even got a better nude midriff – no contest. But for those who still insist on guitars, Dandy Warhols sharp art-cool New York (out of Portland) irony catches the zeitgeist better, and as dins go, their crisp detonations of Pop-culture shrapnel is a whole bunch more fun too. But for serious techno-retro there’s Add N to X in the Radio One Evening Sessions Tent, radioactive with history. If Roland VK-7’s, Moogs and Korgs mean anything to you, then these electro-primitives are a revelation. A solid wall of electronic noise stripped back to its Kraftwerkian origins – and sometimes even, shit, Hawkwind’s theramin too, inventing or reinventing something as totally unique as it is sonically stunning, with just the conventional drumkit to point and define its shapes. While outside in the unforgiving glare of daylight Apollo 440 jump like Van Halen and dance in syncopated style like Madonna into the Groovy. Too klepto-opportunist to be genuinely cool, they filch a Sci-Fi movie-score here (‘Lost In Space’) while ransacking Pop’s storehouse for Gene Krupa, Prince and Elvis there, then – with a near-blasphemous cheek, they half-inch Status Quo with a wit and energy verging on unhealthy Rockist tendencies.

It’s round-about now I start hallucinating about some monstrous temporal quantum anomaly swallowing this stage and dumping it back in time into... say, the middle of the Woodstock Festival! What would all those tripped-out Hippies make of this? Apollo 440 are white and English, yet come coded in the language of 1980’s black Rap and Hip-Hop. To Woodstock’s children there’d be no tunes, and hey – they don’t even play their own instruments! But while the nineties seldom tolerate anything as boring as song-structures, the technology to do all this cyber-techno pillaging has never before – until now, been possible. With the Chemical Brothers, there’s no human stage-presence either. Just two charisma-free digital-Anti-Stars lost behind massively awesome “Block Rocking Beats” of spectacle – BIGGER, LONGER, UNCUT and loud enough to suck your eyeballs into the back of your head. It starts with “Music: Response”, two barely visible micro-figures waving, silhouetted against exploding deluges of image-storming video dementia. And it intensifies, punctuated by mangled “Out Of Control” Bernie Sumner’s shredded vocal samples. Fuck sensitivity. I want NOISE!!! Hippies once talked-up Electric Music For The Mind And Body, Mixed-Media Total Psychedelic Experience, but lacked a prosthetic god immortalised in machinery capable of achieving it. Tom Rowlands and Ed Simons’ mutual chemistry creates what they were incapable of. Would the Woodstock flower-punks be clued-up enough to recognise that? Probably not. This is an evolutionary thing. Unlike most guitar-Pop, Chemical Brothers unique chipped-up interactions may no longer be precisely cutting edge, but more importantly, their stuff could only exist now. While with “Sunshine Underground” they even move inexorably from near-ambient waves of phased colour into a transcendental... say the unthinkable – well, beauty, as its insistently repetitive ego-loss mantra gains momentum. Hey Boy. Hey Girl, this is still the century’s final and most complete All-Over sensory Mind-Movie.
Posted by Andrew Darlington at 14:41