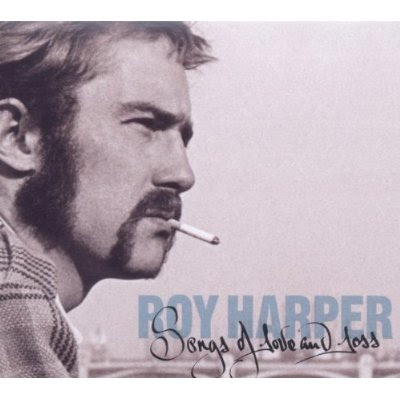 CD Review of:
‘SONGS OF LOVE AND LOSS’
by ROY HARPER
(BELIEVE) www.believedigital.com
Well, the MBE he promised to sell to pay the Rentman, never actually arrived. And the hits didn’t exactly flow. There’s been light and shade, highs and lows, peaks and troughs, but the diary-like annual albums appear across fifty years with resolute consistency, and seldom deliver below expectations. All the fractured romance and squalor of a sophisticated beggar chronicling scripts from Beat-bohemia, poems, thoughts and doodles to gnaw on, mad travel postcards from the edge, in near-pictorial storytelling with heart, head and every other organ on sleeve and disc. He’s a weaver of tales, maker of myths. A personal style already intact from the first vinyls. This is not so much a ‘best of’, because it can’t be, some of his most ambitious songs are huge sprawling epics. Instead, this is a series of illuminating thumbnail snapshots, frames from a life-movie, flashes from the archives of oblivion, and an imperfect wish-list. “Davey” is about his older brother (from ‘Flat Baroque And Beserk’, 1970). The heart-wrenching “Little Lady” (from ‘Lifemask’, 1973) is from ‘Made’, the movie he did with Carol White. And there are the Arcadian dreams of his muse making her first daisy-chain ‘as her nipples hung hard in suggestion’, as David Bedford scores the strings for his rich poetry fast and slow (“Commune” from ‘Valentine’, 1974). We know about the Pink Floyd association, Led Zeppelin, Paul & Linda, and Kate Bush. But Ritchie Blackmore guests on some ‘Sophisticated Beggar’ tracks (“Black Clouds”, “Girlie” from 1966). Bert Jansch wrote the sleeve notes to ‘Come Out Fighting Genghis Smith’ (1967) from which comes “All You Need Is”, while Shel Talmy produces. From ‘Bullinamingvase’ (1977) the tune for the reflective “Naked Flame” is modelled on the traditional ‘Lord Franklin’s Lament’ – the same source as “Bob Dylan’s Dream” (from ‘Freewheelin’’), although both may be taken from Martin Carthy’s arrangement. But while other, lesser talents came and went scoring hits and awards in a blur, across a fifty-year career-arc this strummer never played without a tight cult audience there to carry him. Or the critical support of his peers. Something infinitely more valuable than hits or MBE’s.
Posted by Andrew Darlington at 16:07