ALBUM: 'There Will Be Fireworks' 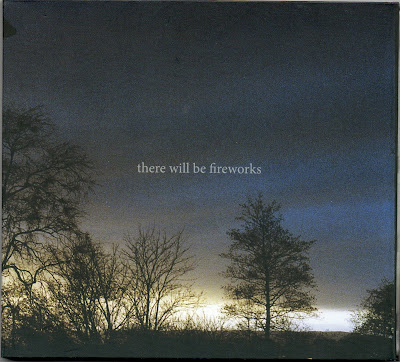 Album Review of:
‘THERE WILL BE FIREWORKS’
by THERE WILL BE FIREWORKS
(The Imaginary Kind, 2009)
www.myspace.com/therewillbefireworks
‘there will be fireworks, and they will light up your eyes,
and you will feel more alive than ever before…’
The future of Rock ‘n’Roll? or at least the future of a certain kind of arty Indie Rock. Sensitively intense gender-balanced, white and articulately literate, Glasgow-based There Will Be Fireworks do all the variant soft-to-loud bits from acoustic stillness with an emphasis on words, abruptly arcing through near-Proggy frills into throat-scraping power-bursts of fine-spun rage. It’s already all there as opening track “Columbian Fireworks” fades in from barely perceptible insect ticking into spacey scintillation. Stornoway poet-author Kevin MacNeil adds narrative voice-over, a magical realist Latin-American text of a dead sister and the coming festival, leading into crashing waves of controlled distortion. No chorus. No riff. No middle-eight. Just three sharply distinct movements forming two states – ‘water and ice, ice and water’, all in just 3:17-minutes.
The cover photos by Jonathan Pritchard are wild rural emptiness, unpopulated, huge darkening sky over sparse trees. A minimalism in direct contradiction to the musical-density within. “So The Story Goes” has a more conventional song-structure build, barely, over a clattering soundscape that gently condenses into long-drawn-out strokes of muted colour. In “Midfield Maestro”, over an acoustic strum singer/guitarist Nicholas McManus complains his ‘tongue gets tied in knots’ and ‘the words they never stick’. These assertions are delivered in a Fran Healey ‘Travis’ vocal burr, but contradicted by the lyrical structure about how the songs he always plays are the songs she hates. Again, a midpoint switch into reverberating instrumental interplay propelled by Adam Ketterer (drums & glockenspiel) and bassist David Madden as the situation resolves in screams about setting these tapes on fire as she unravels in his arms. In “Guising” the words spill out of his cloudy head while she remains eloquent and elegant, another pair of door-to-door ghosts defined in just 1:26-minutes, it crashes directly into “Off With Their Heads”. A balance of contrasts. Nimble guitar from Gibran Farrah (guitar, violin & piano), pitch and power, painting kinetic movements in pandemonium shadow-shows, before further-seguing into the classy purity of “I Like The Lights”. An alphabet of loss in a language he can’t speak, although it sounds pretty articulate to me!
Recorded at the seventeenth-century Old Mill Studios in Strathaven this album is a continuity of memes, incoherence contrasted with light, no moment that is not considered and premeditated, nothing as cheap as hooks, yet illuminated by lights in the sky, roman-candles, constellations, shooting stars that ignite and collide. “A Kind Of Furnace” is a near-Prog epic that plunders the group’s full rich palate, a work of considerable intelligence, too thought-through for hits, and all the better because of it. Intense and relentlessly serious with moody sweeps and melodic repetitions, a textured blizzard of dynamics, a quote from Ian McEwan read by studio-engineer Marshall Craigmyle, and a sharp false-finish that merges into the more percussive up-tempo “We Sleep Through The Bombs”. Moving track-by-track, “Headlights” is a road-movie of the mind driven by keyboards and chiming guitar, and “We Were A Roman Candle” another anguished romantic bout of over-thinking, riddled with melancholy regrets for a brief and intense encounter done soft, then repeat-screamed against a dense wall of noise, finally closing with Elvis’ ‘wise men say only fools rush in… and I’m no fool’. Three more tracks bring the CD up to its required full thirteen, “Says Aye” starts all ‘cold hand and starry-eyed’ but closes with a bleak radio-news sample of ‘let us face, without panic, the reality of our time, the fact that atom bombs may some day be dropped on our cities, and let us prepare for survival by understanding the weapons that threaten us’. “Foreign Thoughts” recapitulates the theme of ‘words that won’t come out’, ‘the sounds you never speak’ and ‘the words left out’, again repeated at volume. And finally, this all-joined-up album is all tied off with “Joined-Up Writing” with ‘the things I could have said… but you never asked, so they just stayed inside my head’, with again the precise mid-point switch into a second-movement with the subtlely hurtling pulsations of reverse-tapes, and a reprise of “Foreign Thoughts” feeding into the open-ended question first posed by Doris Day, ‘que sera sera’ whatever will be, will be.
This hugely impressive debut forms a continuity not light-years from the Songdog thing, whether an oblique take on the Celtic bardic ‘verse in dusty books’, or just thoughtful poetics, it’s a positive sub-genre worth book-marking among your ‘favourites’. There Will Be Fireworks are currently said to be working towards a second album. The future of Rock ‘n’Roll? Maybe not, but at least the future of a certain kind of arty Indie post-Rock.
Posted by Andrew Darlington at 19:19