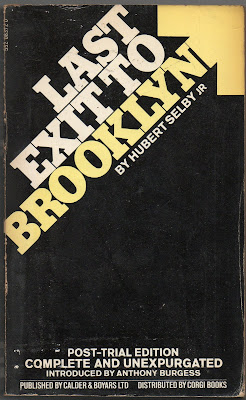 HUBERT SELBY JNR:
POET OF DARKNESS
‘LAST EXIT TO BROOKLYN’ Novel (Grove Edition 1964 – UK 24th January 1966 through Calder & Boyars Ltd/ Paladin paperback) A book with ‘a studied disdain for the laws of punctuation… not an apostrophe from start to finish.’ Subject of a successful private prosecution for obscenity, brought by Tory MP Sir Cyril Black, at its November 1967 trial Selby himself was too in thrall to drugs and booze to attend, but at its appeal the following year Frank Kermode’s testimony was followed by the editor of the ‘Daily Telegraph’, the future Bishop of Liverpool David Sheppard, and Shirley Williams’ father Professor George Catlin. Movie critic Philip French was the 18th witness. Defence witness Anthony Burgess later admits to not particularly liking the book, but took the stand for the general principle of anti-censorship. Eventually, John Mortimer persuades the Court of Appeal to overturn the initial verdict. Re-issued as a ‘Penguin Classic’ edition in 2011 (£9.99) with new introduction by Irvine Welsh and afterword by Selby himself, placing the novel within biographical context. According to Charlotte Newman’s review its ‘surprising intermittent lyricism making it clear that Selby has some sympathy for his characters… saves what could have been a bitterly depressing book from being truly sadistic’ (‘Observer’ 16 October 2011)

‘LAST EXIT TO BROOKLYN’ Movie (Summit Entertainment, 1989 USA, UK premiere 5 January 1990. Guild Video. DVD In-2-Film, 2005. 102 minutes) movie adaptation directed by Uli Edel– billed as ‘The Film That Shocked A Nation’, it features Stephen Lang (as Harry Black), Burt Young (as Big Joe), Peter Dobson (as Vinnie), and Ricki Lake, with a Mark Knopfler score and a Desmond Nakano screenplay. The novel’s extended time-span is compressed down into incidents across a single 1952 summer, and Tralala (Jennifer Jason Leigh) survives her gang-rape to be comforted by Spook. Selby himself cameos as the Taxi Driver who accidentally runs down transvestite Georgette (played by Alexis Arquette). Before the movie restored his celebrity Selby was reportedly living on welfare in a two-room LA apartment, doing menial jobs in gas stations and gift shops.
‘THE ROOM’ (1971) His second novel, a small-time crook in a remand cell has claustrophobic sadistic fantasies. Reissued as a 1988 Paladin paperback as a double with ‘Song Of The Silent Snow’
‘THE DEMON’ (1976 – UK Marion Boyars 1977) Successful tycoon Harry fulfils his dark side through sexual pick-ups, theft, and eventual murders. “Inside the piston beat of madness, he excels… the writing rises from the sludge to the same sulphurous heights as ‘Last Exit’” says Jim Neville (‘Sunday Times’). A Corgi 1979 edition features an atmospherically tacky nude-girl cover.
‘REQUIEM FOR A DREAM’ (1978 – 1979 UK Marion Boyars) Young hoods Harry & Tyrone fantasise about scoring a pound of heroin and getting rich. There’s a movie adaptation directed by Darren Aronofsky (2000)
‘THE WILLOW TREE’ (1998)
‘SONG OF THE SILENT SNOW’ (1986 – UK Marion Boyars) Fifteen short stories including ‘The Coat’ and ‘Of Whales & Dreams’, “dips into scummy urban terror” says Valentine Cunningham (‘Observer’)
‘WAITING PERIOD’ (2001 – UK 2002) A homicidal loner plots a serial murder spree following an aborted suicide, while waiting for his gun licence to come through.
also ‘FEAR X’ (March 2004) Danish director Nicolas Winding Refn’s original screenplay collaboration with Selby, featuring John Turturro, James Remar, and Deborah Kara Unger. A trail of random clues to his wife’s car-park murder leads a Wisconsin Mall Security Guard (Turturro) to a Montana hotel where vigilantes punish bent cops.
also ‘OUR FATHERS WHO AREN’T IN HEAVEN’ (Widowspeak label – 1990) an LP of readings by Henry Rollins, Lydia Lunch, Don Bajema, and Selby + there are other audio titles such as ‘TOUGH GUYS TALK DIRTY’ and ‘LIVE IN EUROPE 1989’

Order a professional Sparkling White Smiles Custom Teeth Whitening System online and SAVE BIG!
* Up to 10 shades whiter in days!
* Results Guaranteed.
* As good as your dentist, for a fraction of the cost.
* Same as dentists use.