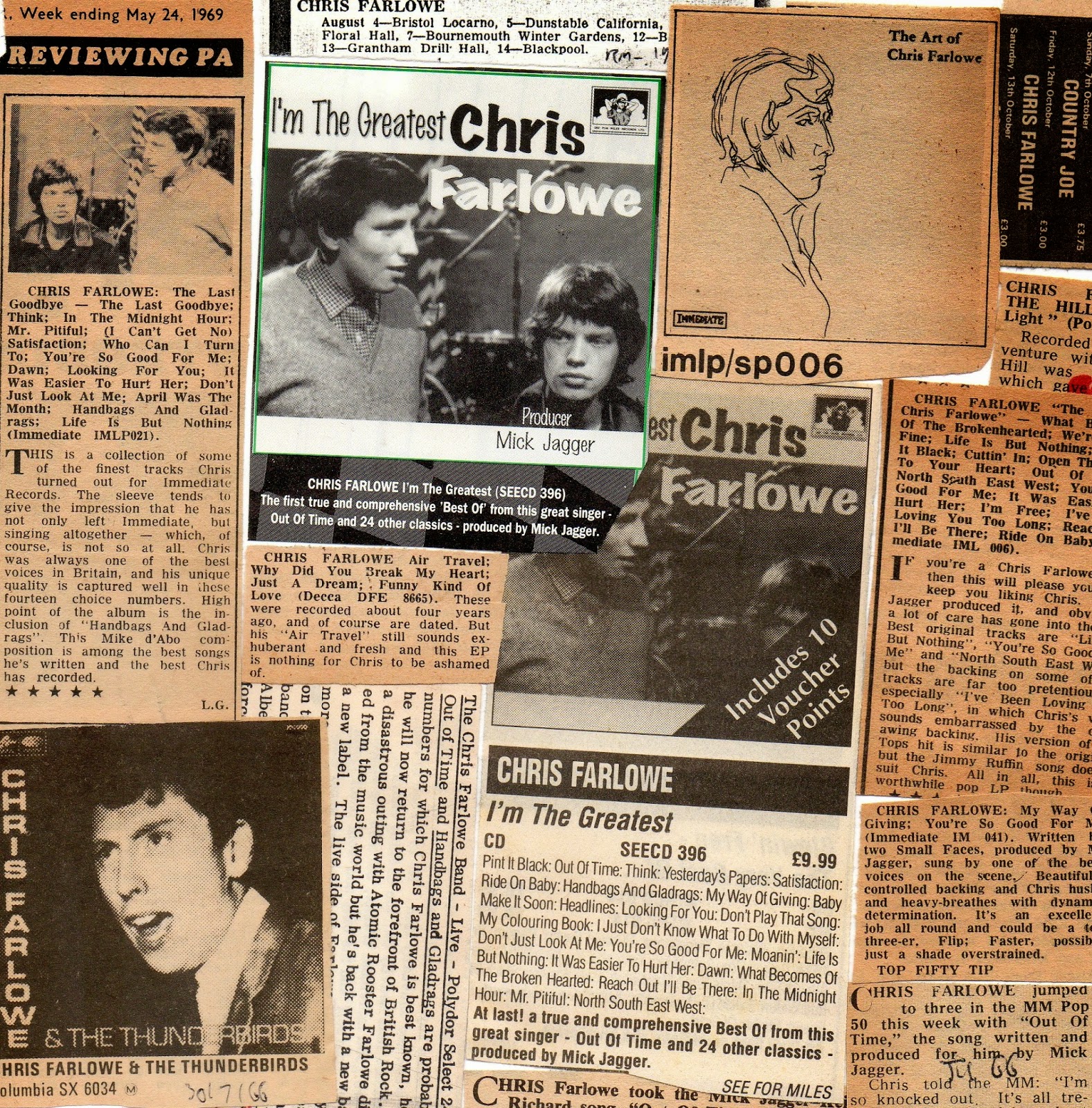 THE ART OF CHRIS FARLOWE


Listen, the Rolling Stones issued their “Out Of Time” in two different, separate incarnations. The first occurs on their fourth album ‘Aftermath’ (April 1966), their first full set of self-composed songs. But the second, with its Jaggered lurches of soaring scratchy violins, wasn’t allowed to emerge until the outtakes compendium ‘Metamorphosis’ (June 1975), which finally unearthed their original demo, the one that shares identical backing tracks with Chris Farlowe’s only no.1, and only Top Thirty hit. An artful Jagger merely switched the vocals to gift his protégé his moment of legend.

Mick and Keith feature prominently on the sleeve of this twenty-five-track compilation too, emphasising their involvement, and so enhancing its historical significance, while – incidentally, boosting its sales appeal too. Jagger is listed as producer, while Glimmer twins writing-credits also lurk behind Farlowe’s earlier chart entry “Think” (no.37 in February 1966), and its follow-up “Ride On Baby” (no.31 that same October), as well as other tracks on this album, “Satisfaction”, “Yesterday’s Papers”, and a Russian-flavoured “Paint It Black”.

With lungs sired by Otis Redding out of a ‘Flamingo Club’ residency by way of Eel Pie Island, Farlowe was as sharp featured as he was always sharply suited, but wholly dependent on the creative patronage of others. Born John Henry Deighton 13 October 1940 in Islington, he started out with his own John Henry Skiffle Group which won the English Skiffle Group Contest at Tottenham’s Mecca Club in 1957. He graduated into the Johnny Burns Rhythm & Blues Quartet, until – following a fortuitous meeting with guitarist Bob Taylor, by 1962 he was fronting the Thunderbirds, and toured Germany with them. Back in London they were signed by club-supremo Rik Gunnell, and quit their day jobs. “Out Of Time” was his tenth single. It was only after a failed Decca single (“Air Travel” in June 1963), three for Columbia (including “Buzz With The Fuzz” in 1965) and one for Sue (“Stormy Monday Blues” as ‘Little Joe Cook’) that Stones’ would-be svengali and Spector impersonator Andrew Loog Oldham gave him the big hype for his newly-launched Immediate label. But once that connection was made, nothing that Sixties hip London could provide was spared.

Smallfaces Steve Marriott and Ronnie Lane masterminded “My Way Of Giving” (no.48 in February 1967), while the Manfreds’ Mike D’Abo wrote Farlowe’s final hit “Handbags And Gladrags” (no.33 in that December). Farlowe husks and heavy-breathes a sweaty Black facsimile, a sore-throat croak sufficiently authentic to enable those upwardly-mobile Sweet Soul wannabe’s to live out their Chicago and Memphis production fantasies, while advancing their song-writing profile and developing their studio skills. There were two high-profile albums – ‘Fourteen Things To Think About’ (IMLP 005) and ‘The Art Of Chris Farlowe’ (IMSP 006) in June and November 1966 into which this bombastically-titled compilation dips. But it’s still White Soul on black vinyl, and while his hoarsely Blues-laden histrionics have moments of pure power, Farlowe’s vocal range is both limited and highly mannered. As is most apparent on his reworked Stax o’ tracks from Wilson Pickett’s “In The Midnight Hour” to Otis’ “Mr Pitiful” lifted from the EP ‘Farlowe In The Midnight Hour’ (IMEP 001, 1965). 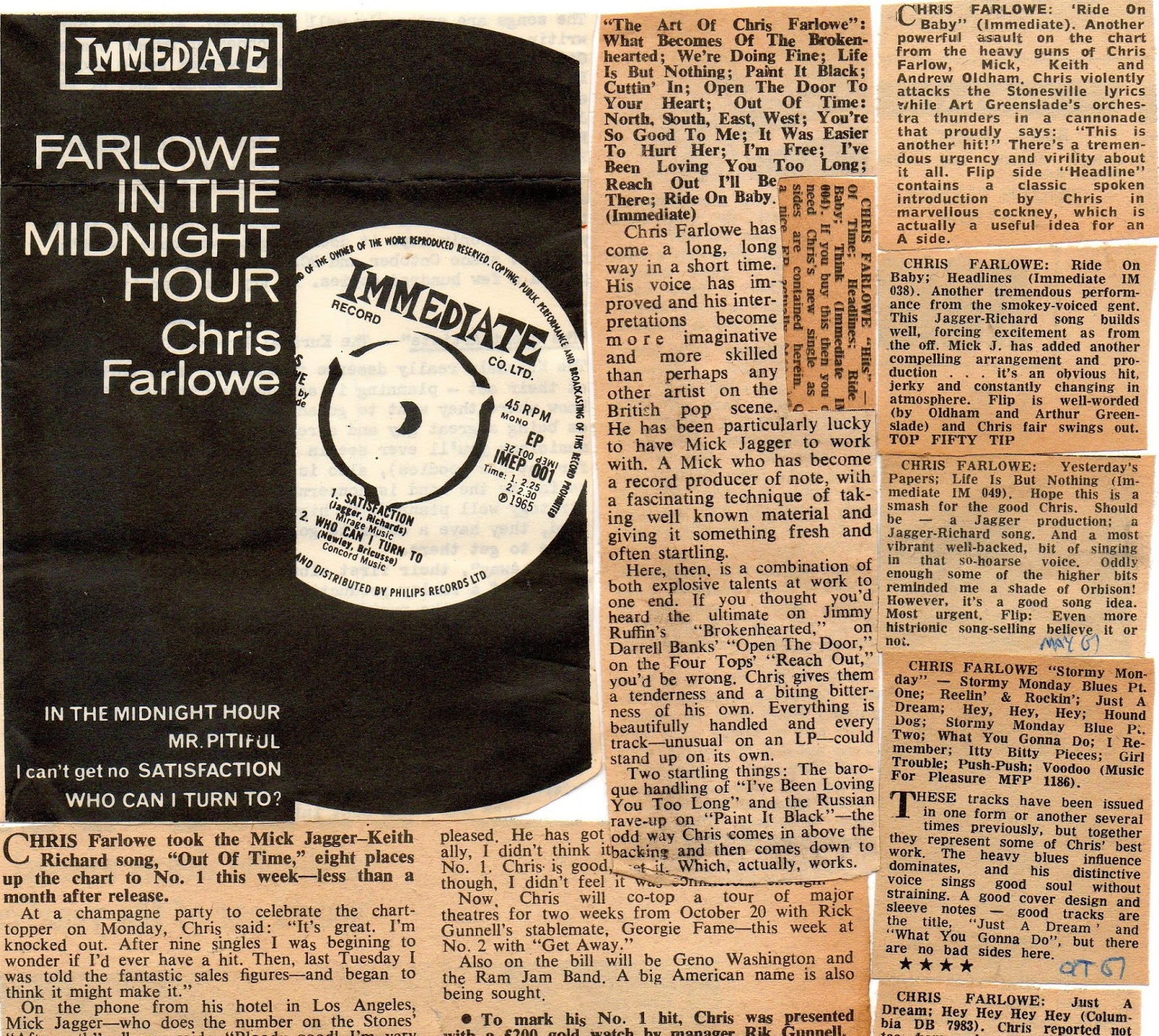 Not that those limitations mattered when Chris roared and Souled-Out the ‘Marquee’ or Gunnell’s ‘Ram Jam Club’. While his Thunderbirds included, at various times, Carl ‘the P in ELP’ Palmer, Head Hands & Feet guitar virtuoso Albert Lee, and ace keyboardist Dave Greenslade. Like Zoot Money, Herbie Goins and Geno Washington, they were cult favourites to their pilled-up Mod devotees. And when the elements come together – as on the sitar-laced “Moanin’” (no.46, June 1967), or “Handbags And Gladrags”, and yes – “Out Of Time” too, it’s still possible to glimpse why Farlowe was so highly rated by both critics and peers. To see why “Out Of Time” is still an iconic staple of oldie playlists and every Sixties hits compilation across the years since.

Although this anthology of his Immediate years catches Chris Farlowe at his best, it’s tempting to add that by the end of the decade he was already ‘obsolete, my Baby, my poor discarded Baby.’ He endured an uneasy stint rejoining Dave Greenslade with fluid jazz-Rockers Colosseum, then a fifteen-month alliance as Atomic Rooster’s vocalist. He could also be heard fronting Jimmy Page’s 1988 solo LP ‘Outrider’.

But “Out Of Time” nudged Georgie Fame’s “Get Away” aside to take the no.1 position the week England won the World Cup. Both were singular events. And neither has ever been forgotten. 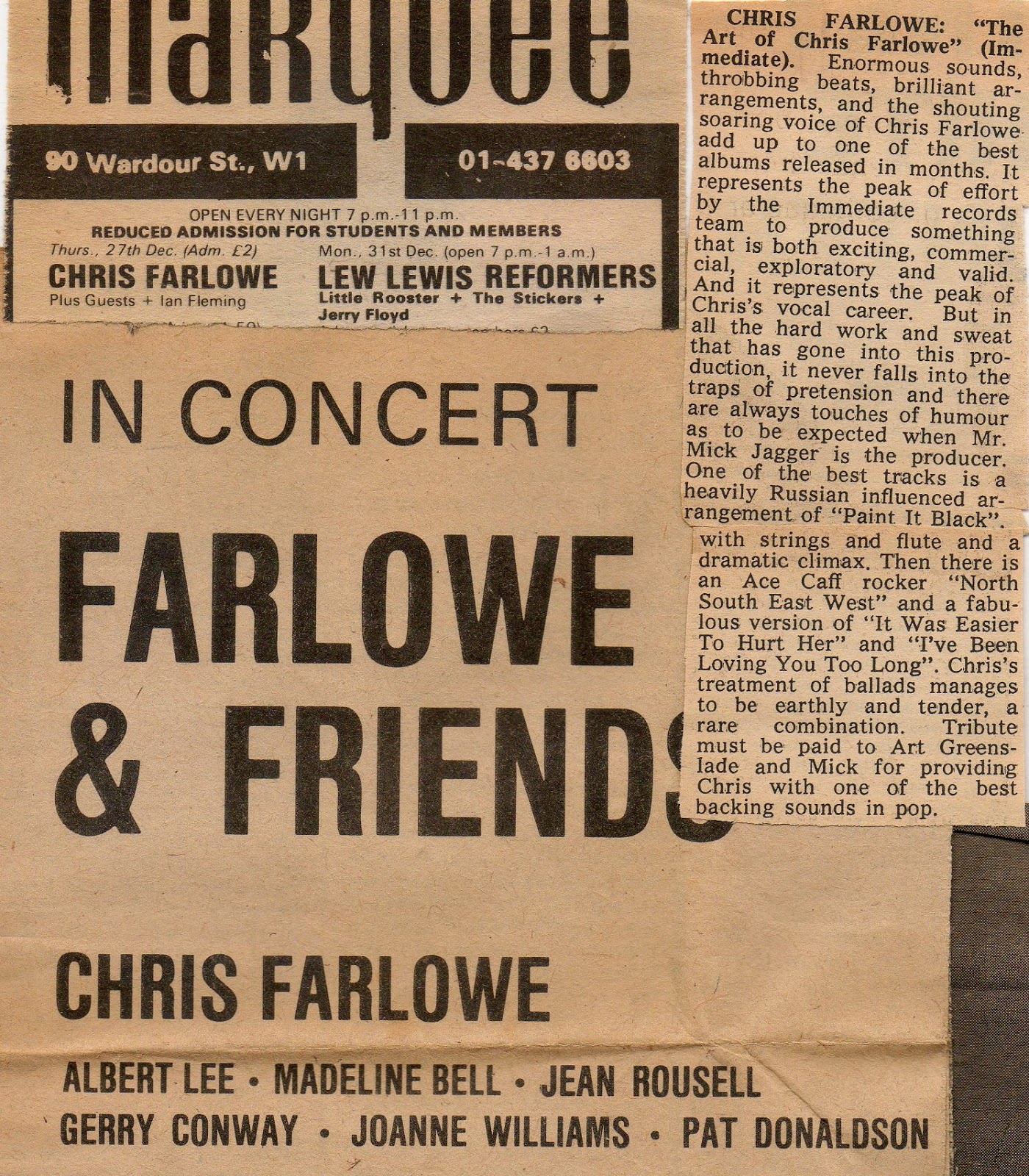 CHRIS FARLOWE: THE ART OF…

Order a professional Sparkling White Smiles Custom Teeth Whitening System online and enjoy BIG SAVINGS!
* 10 shades whiter in days!
* Results Guaranteed.
* Better than your dentist, for a fraction of the cost.
* Same strength as dentists use.

Discover how to get free flights with Travel Hacking.