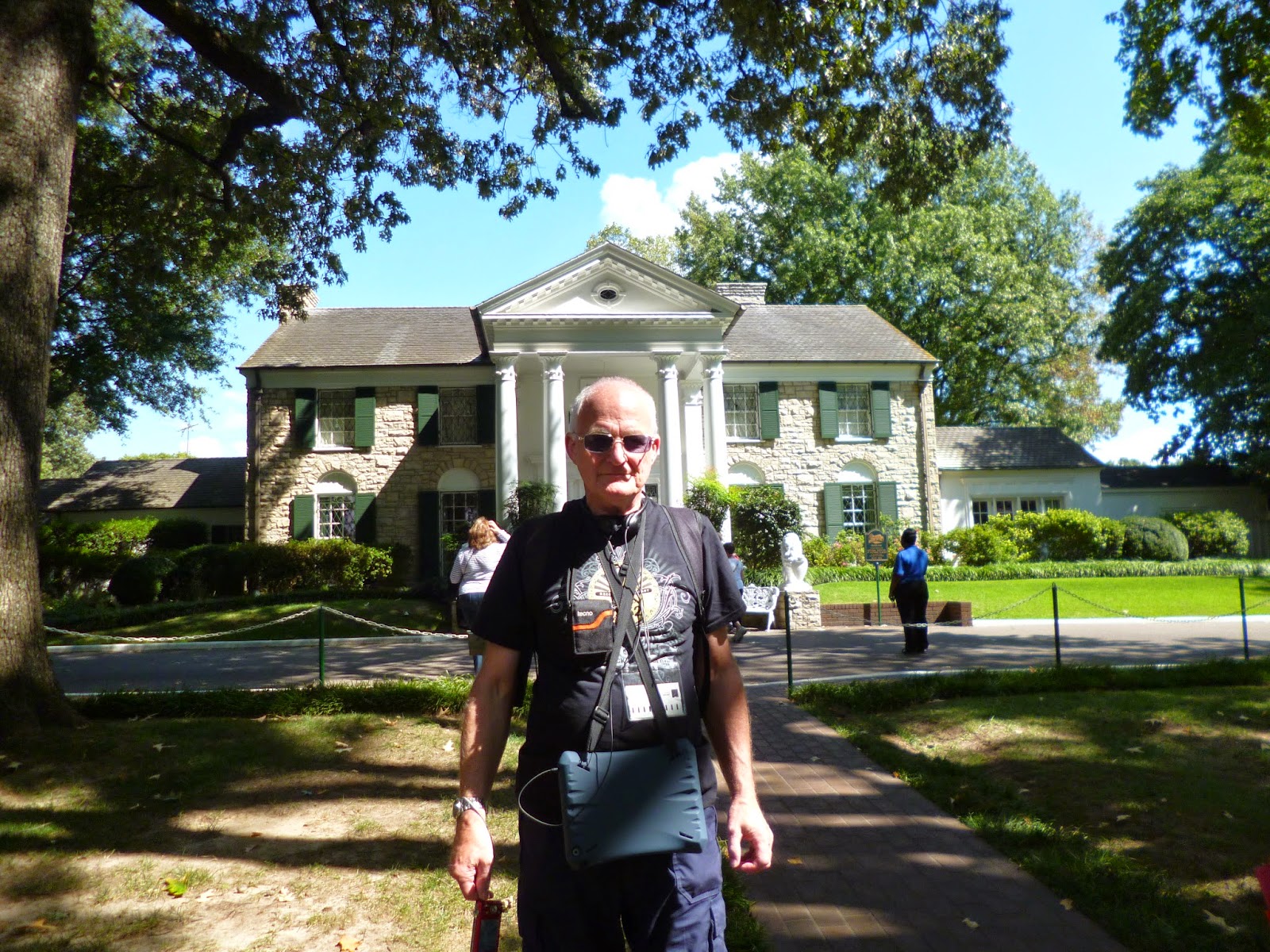 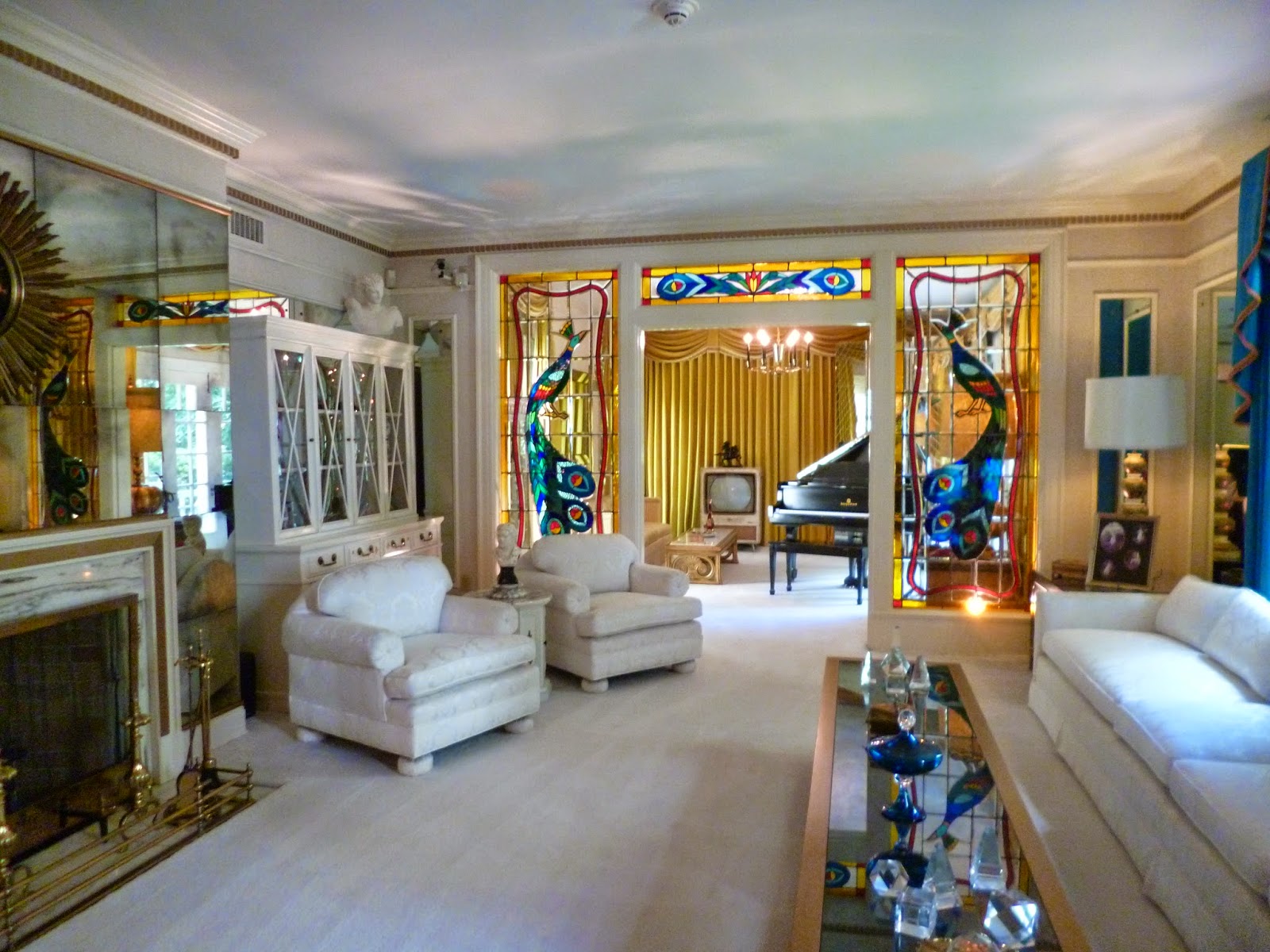 On the way here we talk about Justin Bieber and Britney Spears. They went into overnight fame and wealth, and couldn’t deal with it. They lost the plot. Elvis Presley came from dirt-poor country-boy to become more globally famous and vastly wealthy than just about anyone else. He bought ‘Graceland’ in early 1957 and it’s reassuring evidence that, despite career blips and the kind of excess we’re all familiar with, he never quite blew it. There’s no massive 1950’s tasteless splurges of bling or monumental ostentation. Even what later became known as the Jungle Room – where ‘there’s a pretty little thing, waiting for the King’, is more cool and elegant. Graceland is the kind of place you’d move into, if you had the budget. 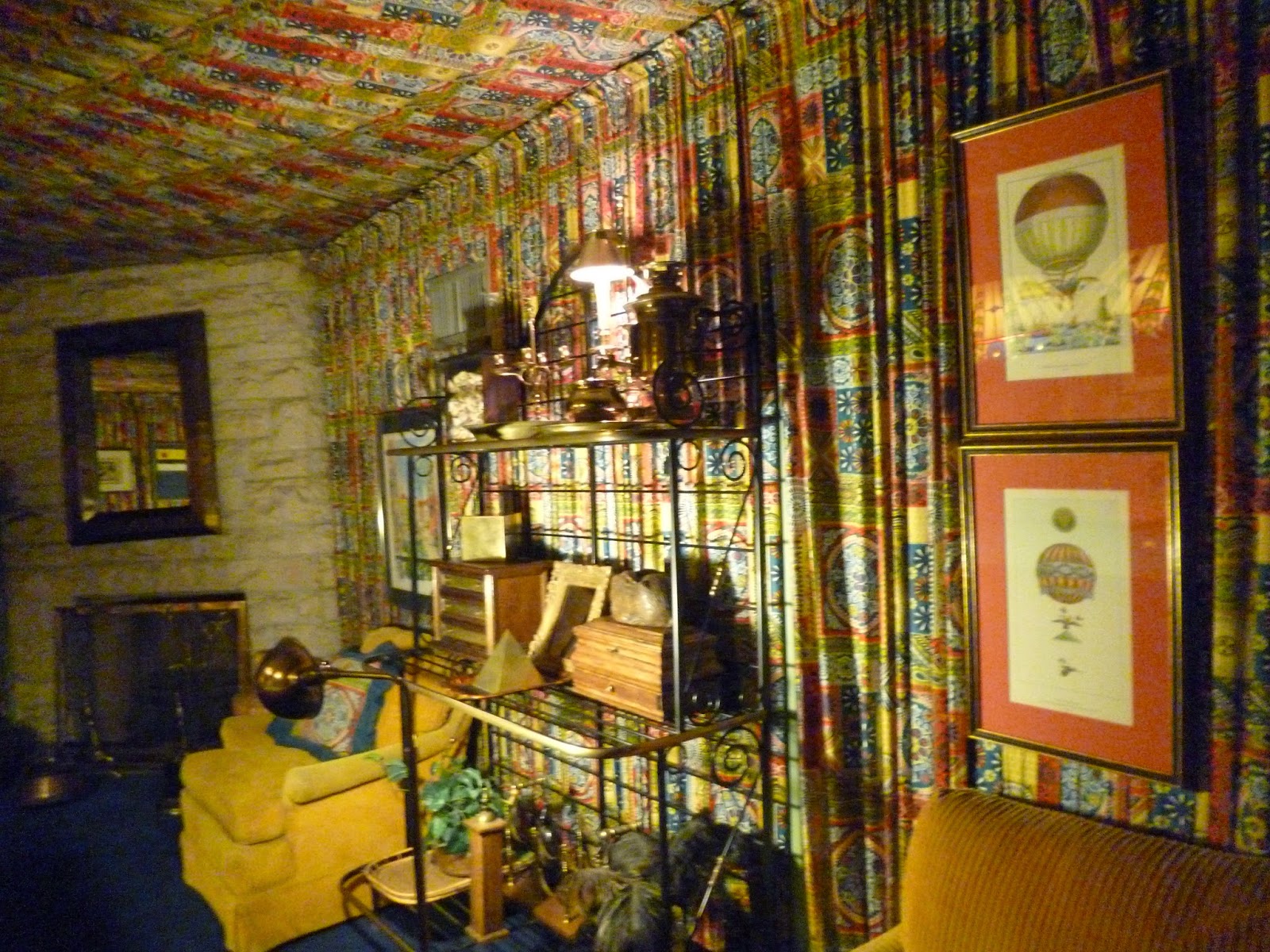 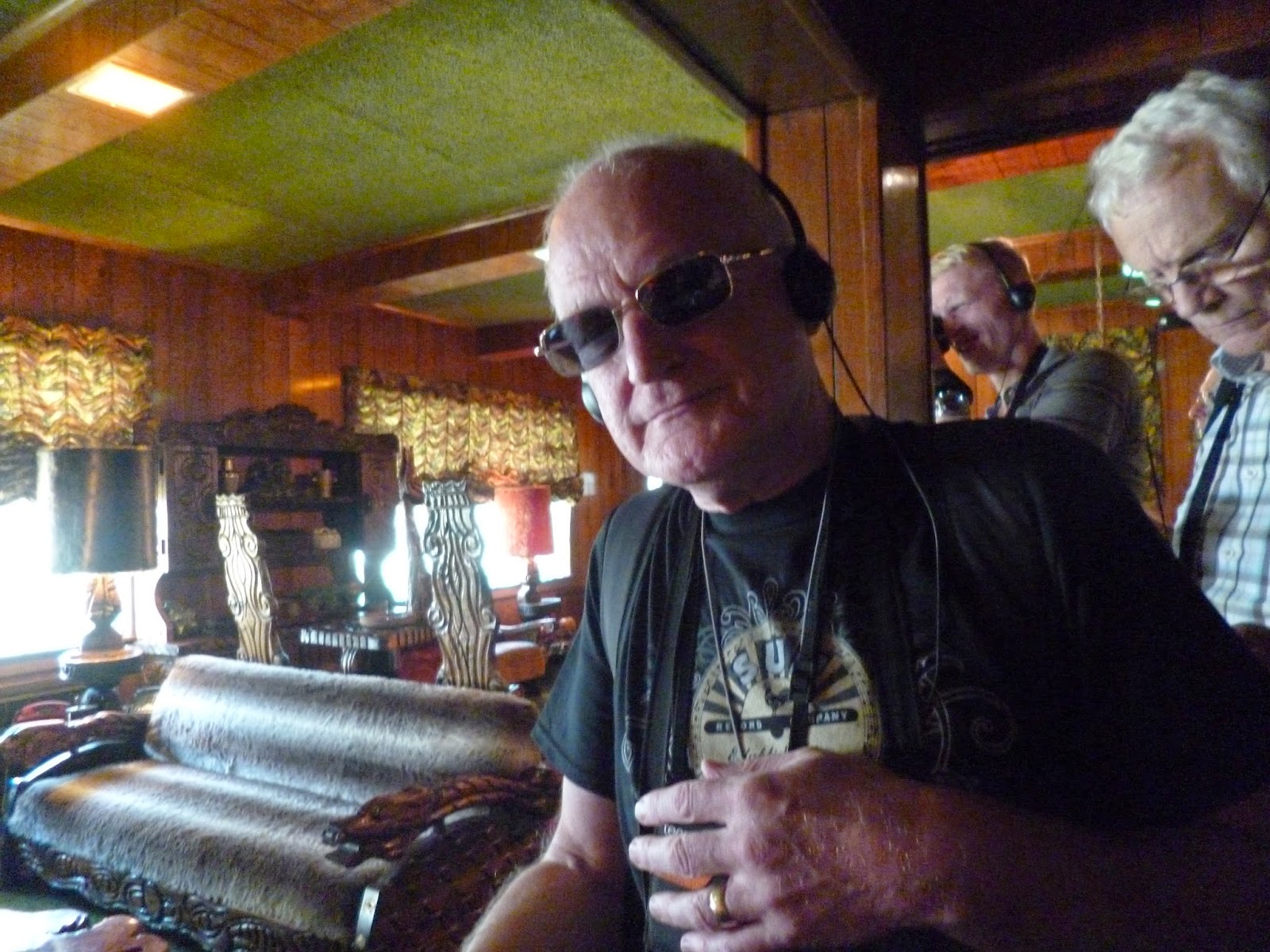 When he bought the place, it was pretty-much an empty shell. It was decorated and redesigned according to his dictates. Later, no doubt, Priscilla had a say in its décor too. Yet it reflects his taste. Although originally in a wooded area outside the city, the Memphis sprawl has extended to surround it, with the renamed ‘Elvis Presley Boulevard’ lined with souvenir shops and malls. Shuttle coaches take visitors ‘poor boys and pilgrims’ from one side of the boulevard, where the booking, frisking and queuing takes place, across to and up the drive to Graceland itself. It feels hot and irritable standing in line. There’s no opportunity to grab a photo at the famous music-notes gates. Instead they will snap you in front of mock-up gates, and sell you the photo in a presentation folder as you leave. They are not cheap. Nothing here is cheap. But as you queue for the next shuttle in the sullen Tennessee heat with the endless Elvis soundtrack playing from speakers around you, they issue you with iPads that will talk you through each room, with click-on video-clips, audio-grabs and fact-sidebars. iPads don’t come cheap either. 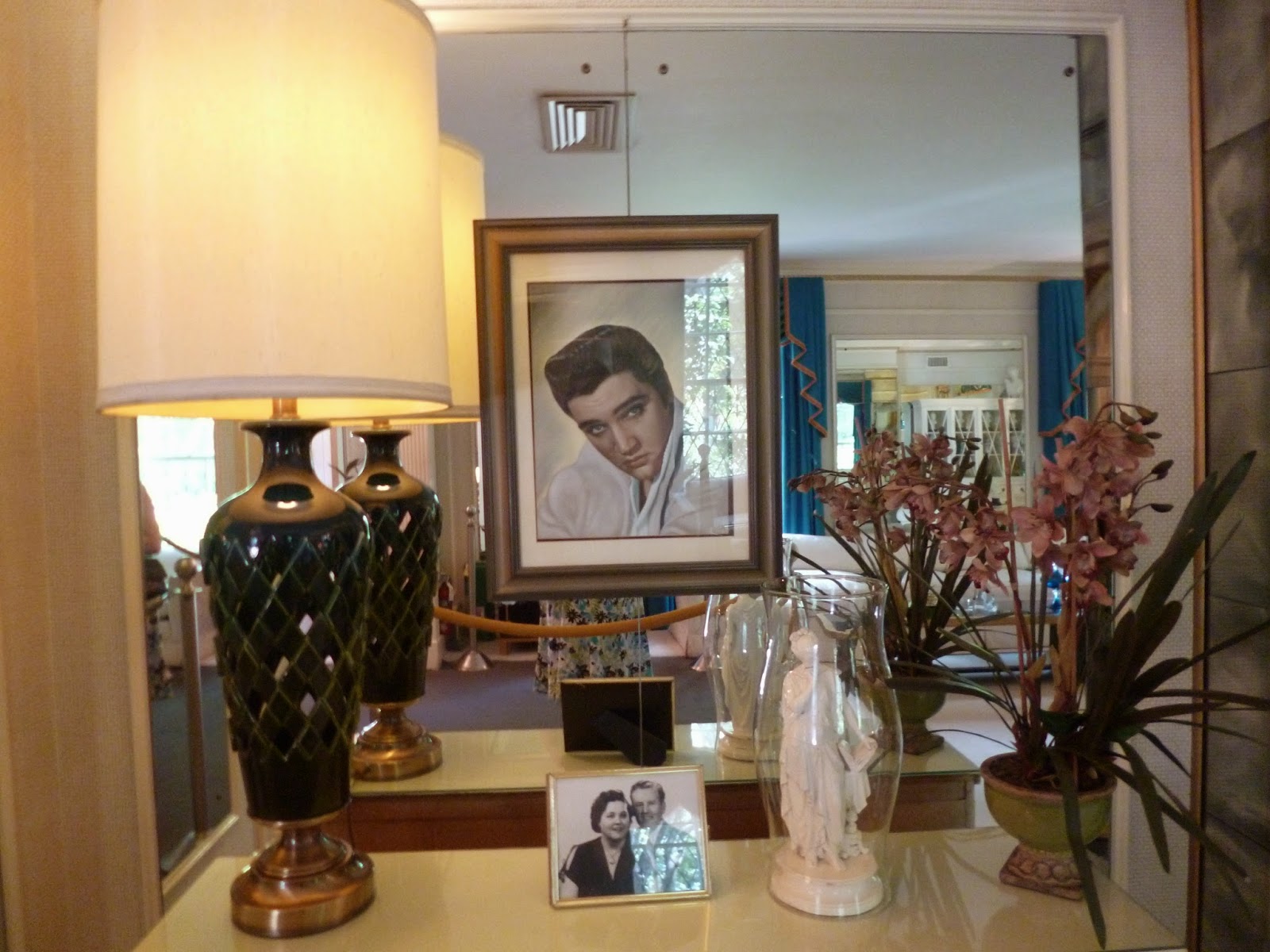 Never quite understood the line in the Marc Cohn song about ‘do I really feel the way I feel’, now I’m here, now I’m “Walking In Memphis” myself, I know exactly what he means.

Pop isn’t rational. There’s no verifiable reason for liking or not liking. Perhaps it’s just that, like sex, the first cut is the deepest? Some great writer-producer teams have attempted to reduce the formula down to an equation. Some have created Hit Machines as a result. But there’s always going to be that inexplicable quality about music which is more mystical than it is logical. There are immensely talented artists you can respect, and yet not love. Neil Young is a creative giant. The intensity of some of his songs – “A Man Needs A Maid”, can near reduce me to tears. Yet listen to a full Neil Young album, and the high whine starts to grate before the wind-down groove. 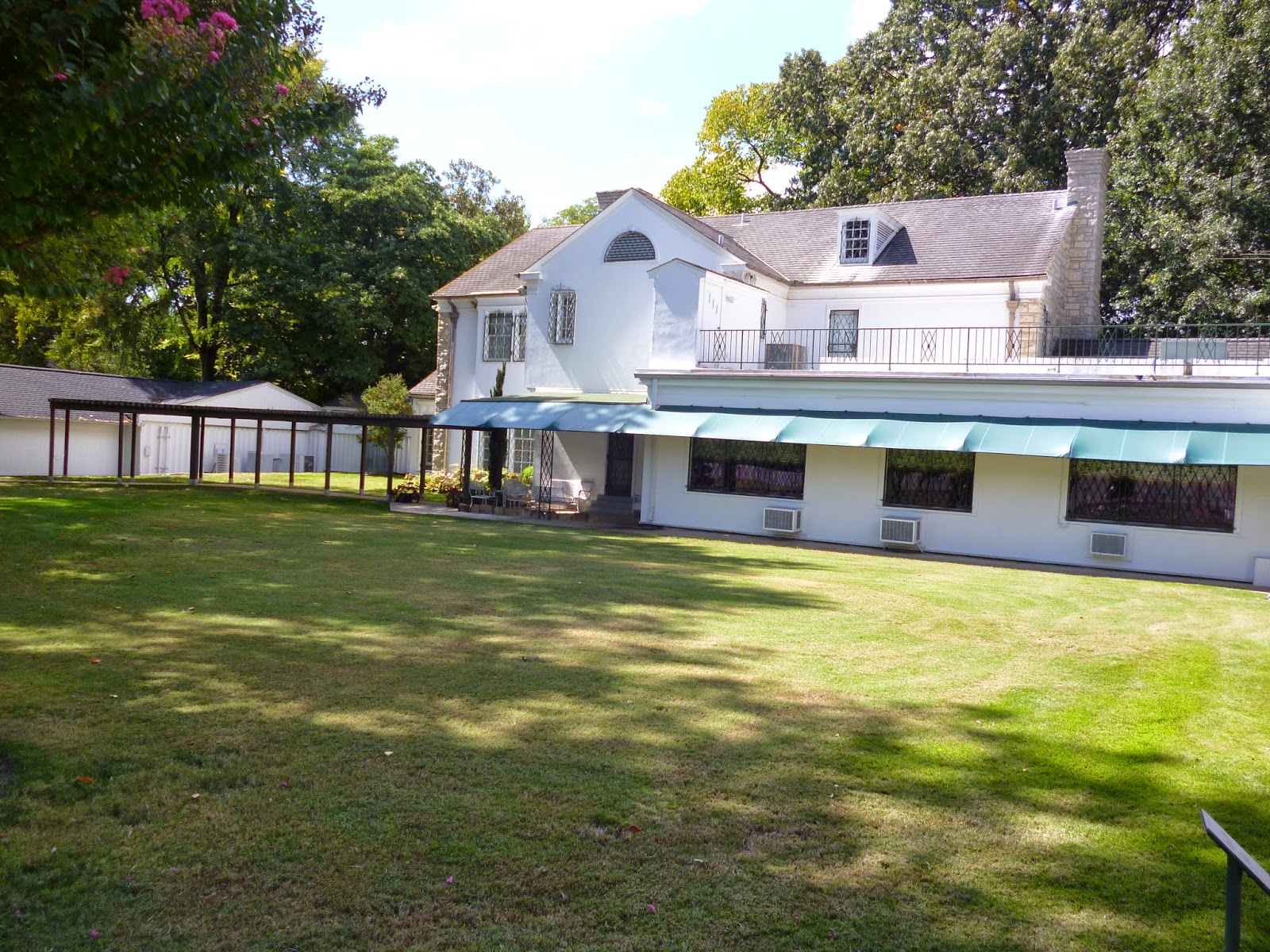 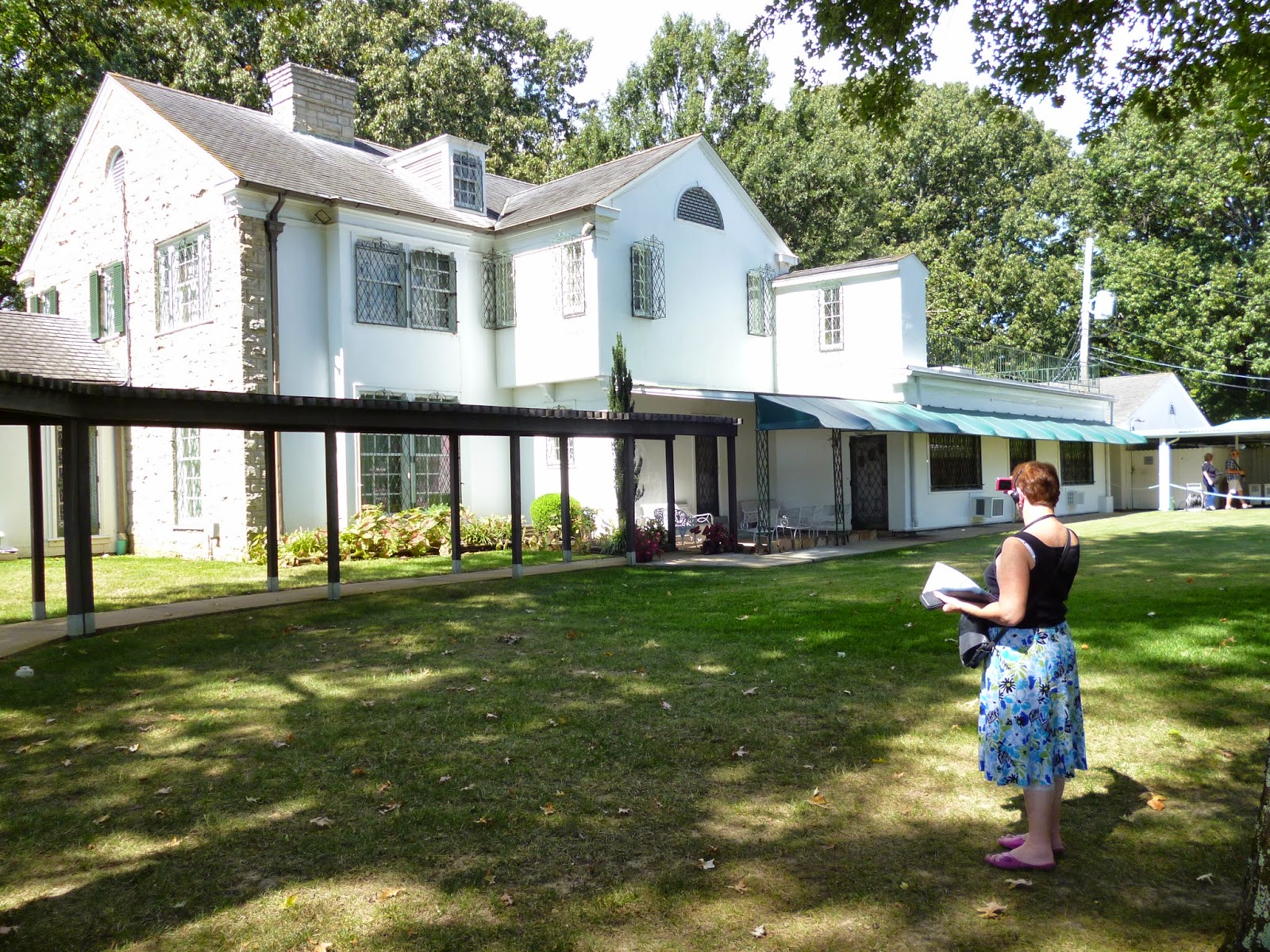 When it comes to creative intelligence Elvis Presley was never in the same league. But he has the voice. Even working with the most appallingly inept material, he could midas it into gold. At his very worst – and I’m thinking the 1964 ‘Kissin’ Cousins’ LP, the soundtrack album of the embarrassingly inept movie, side one track six, “Tender Feeling” is a barrel-scraping exercise in songwriting, tacking on hasty new lyrics to the old “Shenandoah” tune, yet the vocal interpretation salvages it with some dignity, so it’s a delight to listen. Was Elvis smart? He was what we’d now call trailer-trash sharp, dirt-po’white, he couldn’t articulate what he did, or why it proved so seismic. His was animal-intuition. He worked the song, until it felt ‘right’. There’s a TV-clip of Richard Madeley interviewing Shakin’ Stevens. When he’s asked a question he clearly doesn’t understand, Shakin’ playfully pounces on Madeley and gets him in a headlock. I suspect that in this sense, Shakin’ is a fairly accurate Elvis impersonator. When Elvis does a press-conference, and is asked if beneath the fame and celebrity he’s still the same ole country boy, he simply stands up and indicates his massive blingy jewelled belt, which says it all. 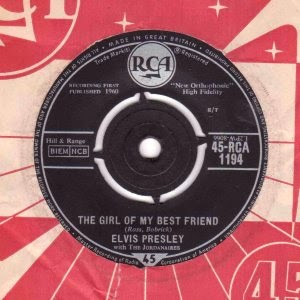 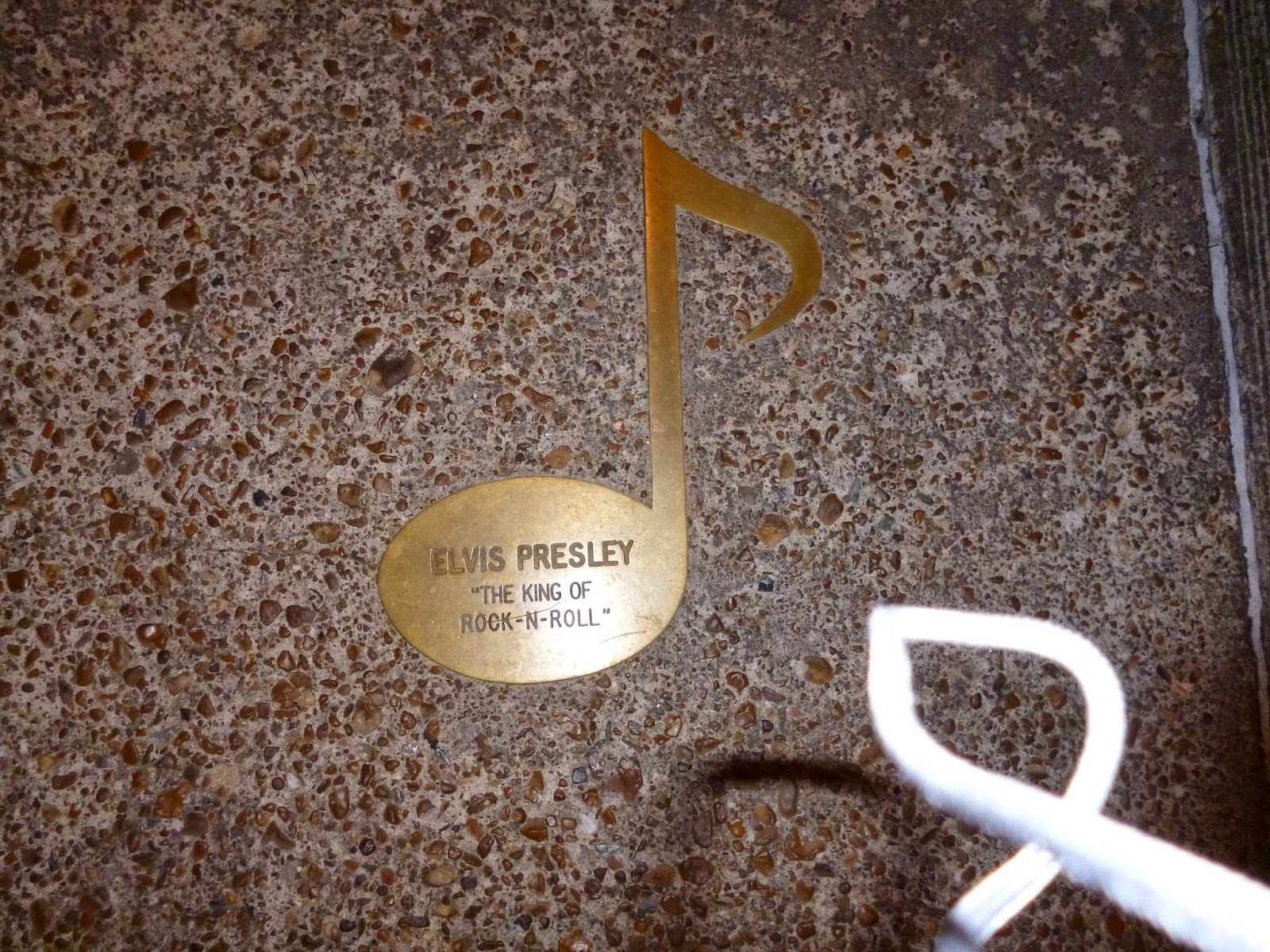 The first vinyl 45rpm record I ever owned was Elvis’ “The Girl Of My Best Friend”, on the black RCA label, with its silver lettering. I’d just turned thirteen, and I was entranced. Even when I hear that song now – shuffled unexpectedly on my iPod between the Ramones and Prodigy, I still love it, from the Jordanaires opening ‘aah-aah aah-aah-aah’ into the honeyed-smooth first line. As a track (side one, track three) on his first post-Army LP ‘Elvis Is Back’ (April 1960) – what many consider to be his greatest album, it wasn’t even intended to be a single. In the USA it wasn’t. The American follow-up to his lubriciously suggestive hit “Stuck On You” was “It’s Now Or Never” c/w “A Mess Of Blues”, but when copyright complications due to its “O Solo Mio” origins held up the song’s UK release, there was a commercial vacuum that needed filling. Hence “A Mess Of Blues” was promoted from ‘B’-side status while “The Girl Of My Best Friend” was lifted from the album to accompany it. Marketed as a double-‘A’ (RCA 1194) it hit no.2 in September 1960 (beneath the Shadows “Apache”) – appropriately close to my birthday. I’d heard it on the BBC Light Programme, the ‘bumper-bundle’ most-requested record of the week on Brian Matthew’s ‘Saturday Club’. 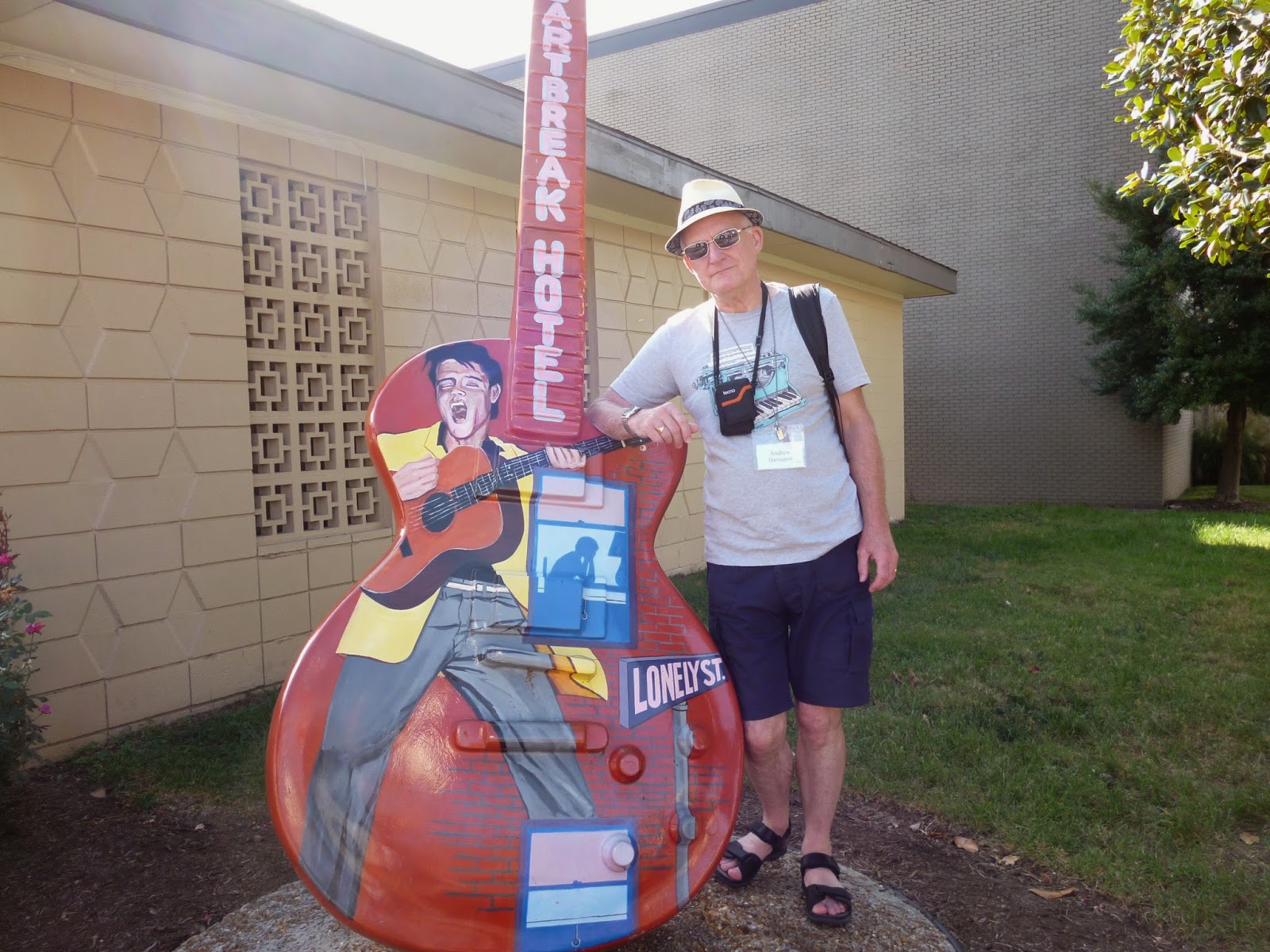 So I bought it. I still have it, although I also have subsequent CD and mp3 versions too. It was what critics of the time termed a rocka-ballad, written by Sam Bobrick and Beverly Ross, first recorded in 1959 for Warner Bros by Charlie Blackwell. But listen to Blackwell’s original vinyl, and it’s an awkward charmless thing. Then check out the various Elvis outtakes on YouTube as he fumbles through different takes, moulding the contours of the simple song into an irresistible Pop gem. How did he work the alchemy? By intuition? Until it sounds somehow right? A thing of instinct?

Elvis sound-alike Ral Donner took the song into the US charts, to no.19 as an ‘Elvis Is Back’ cover. Johnny Burnette, and much later Bryan Ferry also reworked it. But at a concise 2:27-minutes, Elvis’ assured vocal control takes it up several notches. It consists of fairly routine love-triangle subject-matter, recycling ‘the way she walks’, with ‘the way she talks’ – a rhyme used so frequently in Pop it’s almost a joke. Elvis gives its triteness an achingly empathic sincerity. He’s caught up in a romantic dilemma, ‘I want to tell her how I love her so’, but he’s wary that ‘what if she got real mad and told him so?’, then he ‘could never face either one again.’ So he watches ‘the way they kiss’ and ‘their happiness’, with a jealously-pained secret that can never speak its name. Will his aching heart ever end? Even its title is a little grammatically clunky, cut-up and reshuffled more efficiently by Cars into “My Best Friend’s Girlfriend”. Whoever said Pop was rational?

Many years later, reissued as an ‘A’-side in its own right, in a chart full of Abba, Demis Roussos and Tina Charles, it reached no.9 in October 1976. Odd to think it might also have been the first vinyl 45rpm purchase for fans of that generation too. 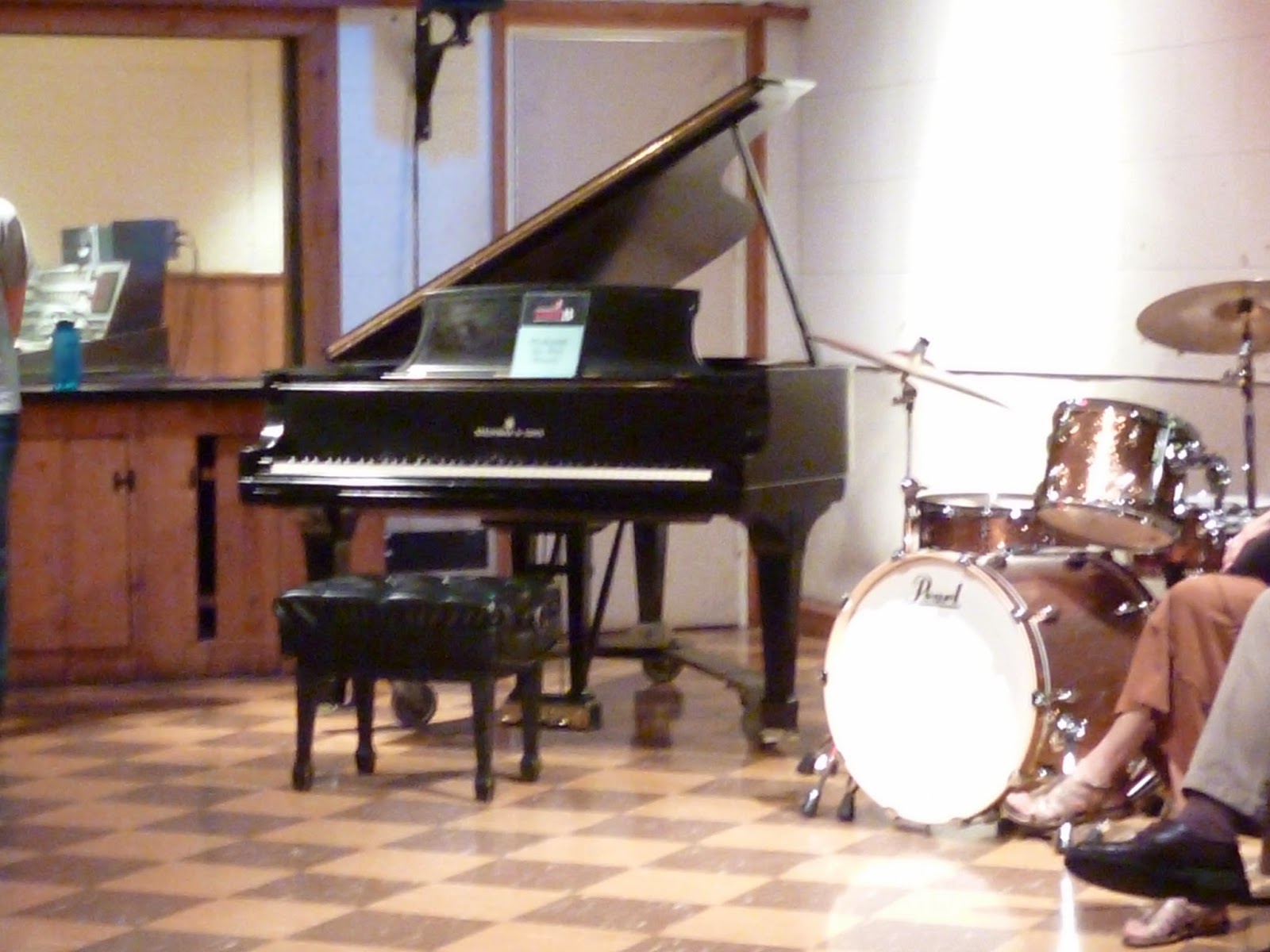 RCA Victor Studio B in Nashville is where Elvis recorded it. Although signed to other labels Roy Orbison and the Everly Brothers also booked studio time here. While Gentleman Jim Reeves did most of his recordings here. Floyd Cramer’s original piano is there, in the corner of the studio. The one he played on Presley sessions for “Mess Of Blues” and ‘Elvis Is Back’. Elvis installed his own mood-lighting. It’s still in place. He would use red lighting for up-tempo sessions. Blue lighting for slow ballads. But neither worked when he was trying out for the first takes of “Are You Lonesome Tonight”. Until he decides to fade the lighting way down, and record the song in intimate darkness. Here, now, they fade the lights down to darkness, and fade the track in, Elvis’ voice resonates spookily, here, where he stood to record it. It’s impossible not feel a chill of frisson. This is a moment of extreme dislocating weirdness. I’m not afraid to admit it had me choking up. 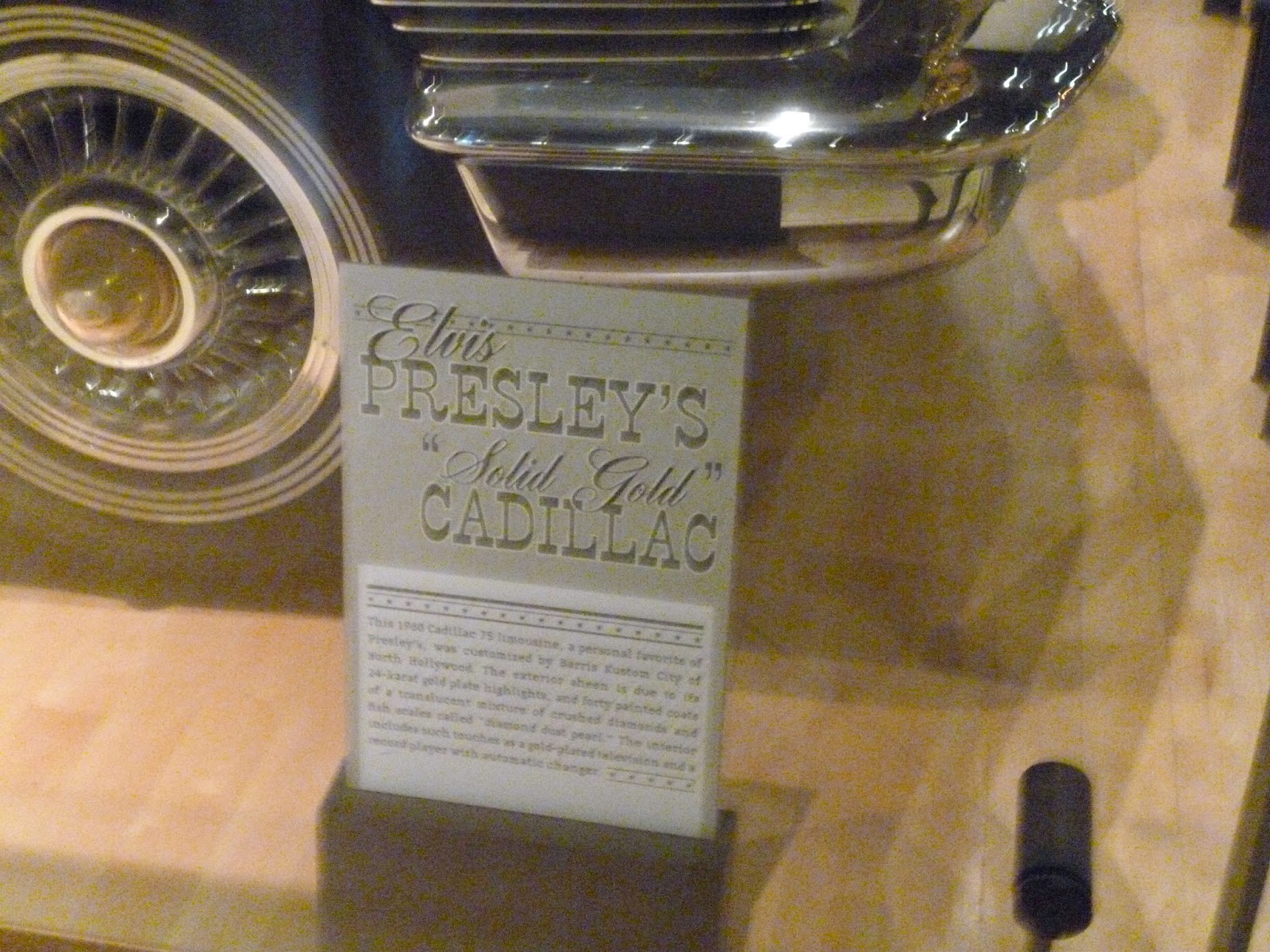 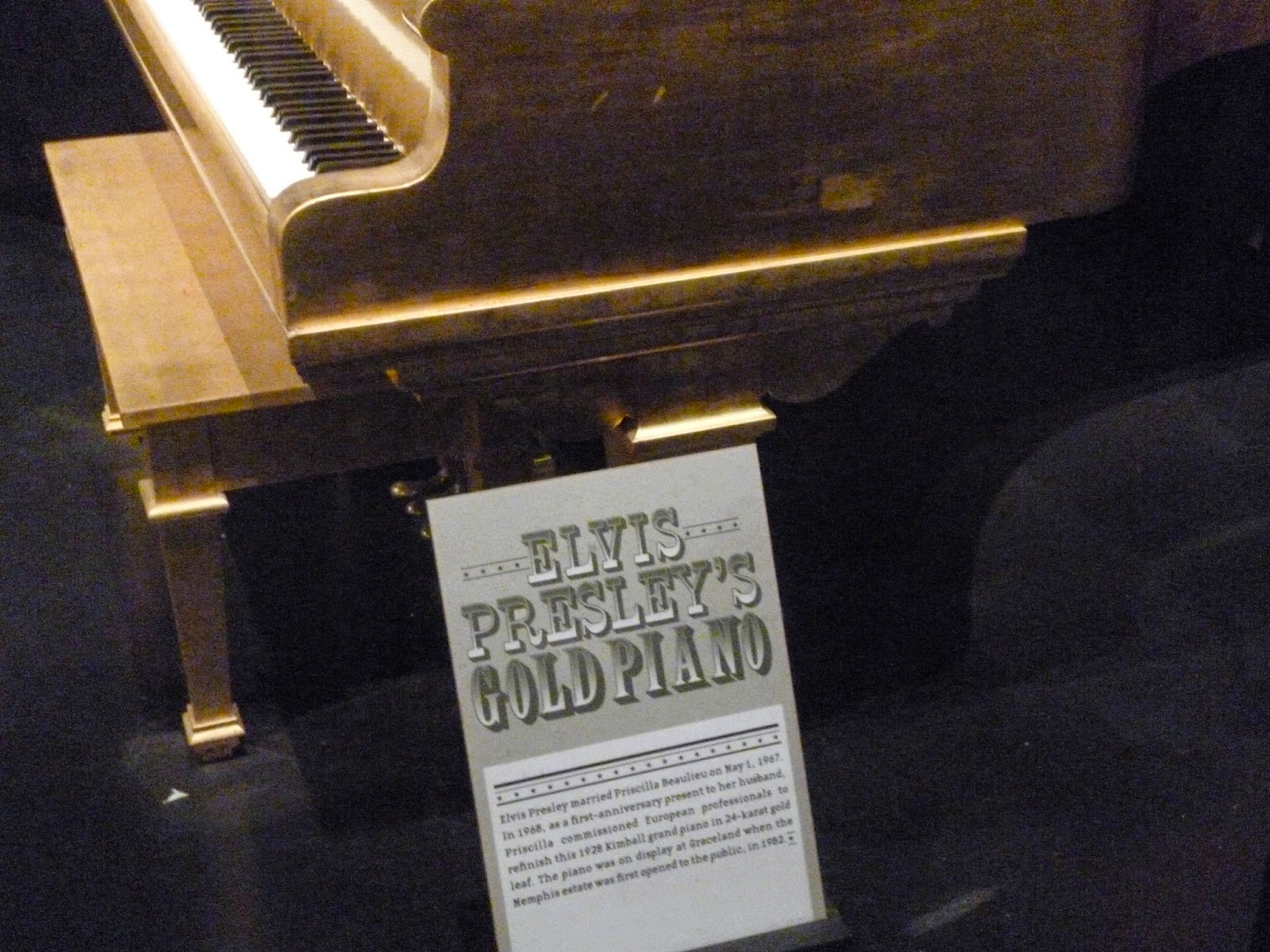 We pass Chet Atkins Place on the way here, but when I want to re-find it for a photo I lose my way. There’s Roy Acuff Place too in a tight ‘Music City’ block off the long Broadway which eventually counts down to the music bars and country stores sloping towards the Cumberland Riverfront. Studio B was constructed as a result of Chet’s urging, in 1957, partly to facilitate the demands of Elvis’ burgeoning career. It wasn’t called Studio B then, not until a larger studio complex was built on 17th Street, which became Studio A. It’s Studio B that remains legendary. 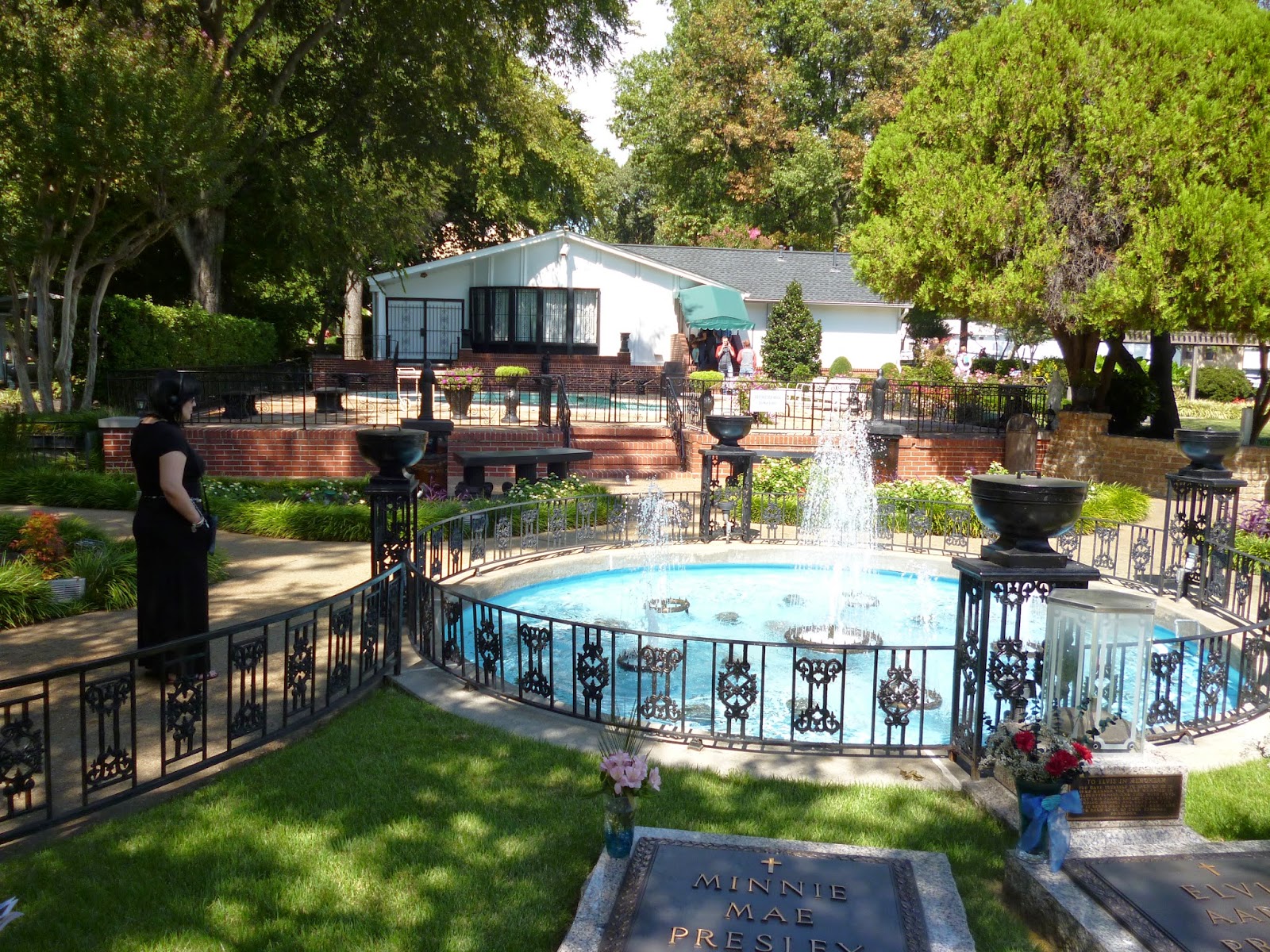 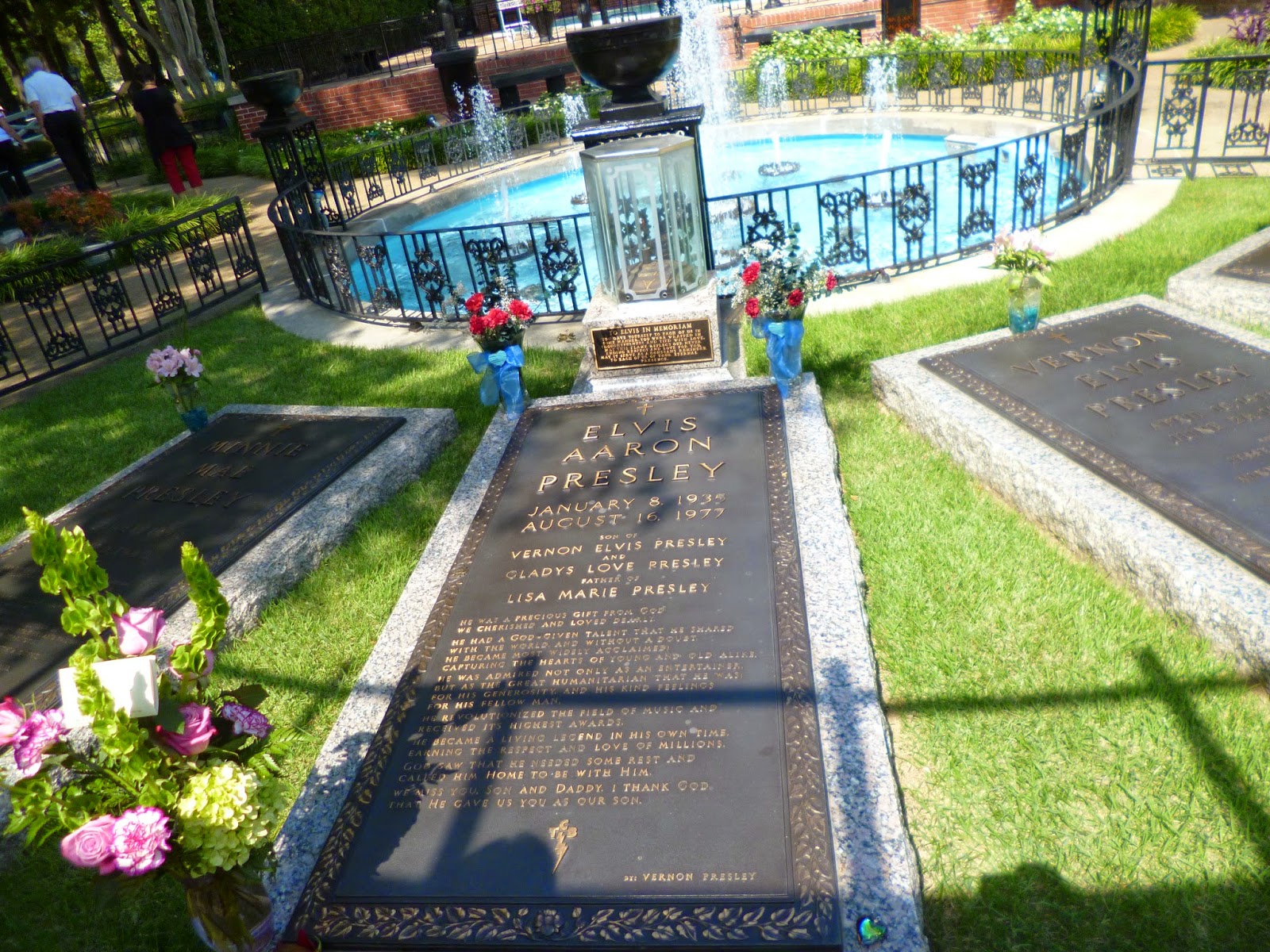 He drove golf-carts across these Graceland lawns where squirrels now enjoy the shade of the trees. He rode horses around the paddocks outside the back. And stroll around the side, by the surprisingly modest swimming pool, there’s the meditation garden where Elvis would come when he wanted peace and quiet. So pause, deliberately, take it all in, condense this moment down for future reference. The formation of Presley graves are here. Four of them. Parents Vernon and Gladys. Elvis himself. And grandmother Minnie Mae Presley, who outlived them all, and died in May 1980. There’s also a plaque for Elvis’ stillborn twin, Jessie Garon.

Standing here now, about as close to Elvis Presley as I’m ever likely to get, is an undeniably disquieting experience. I didn’t expect to feel this way. I couldn’t quite anticipate how I’d feel. But yes, he reaches out and touches me… 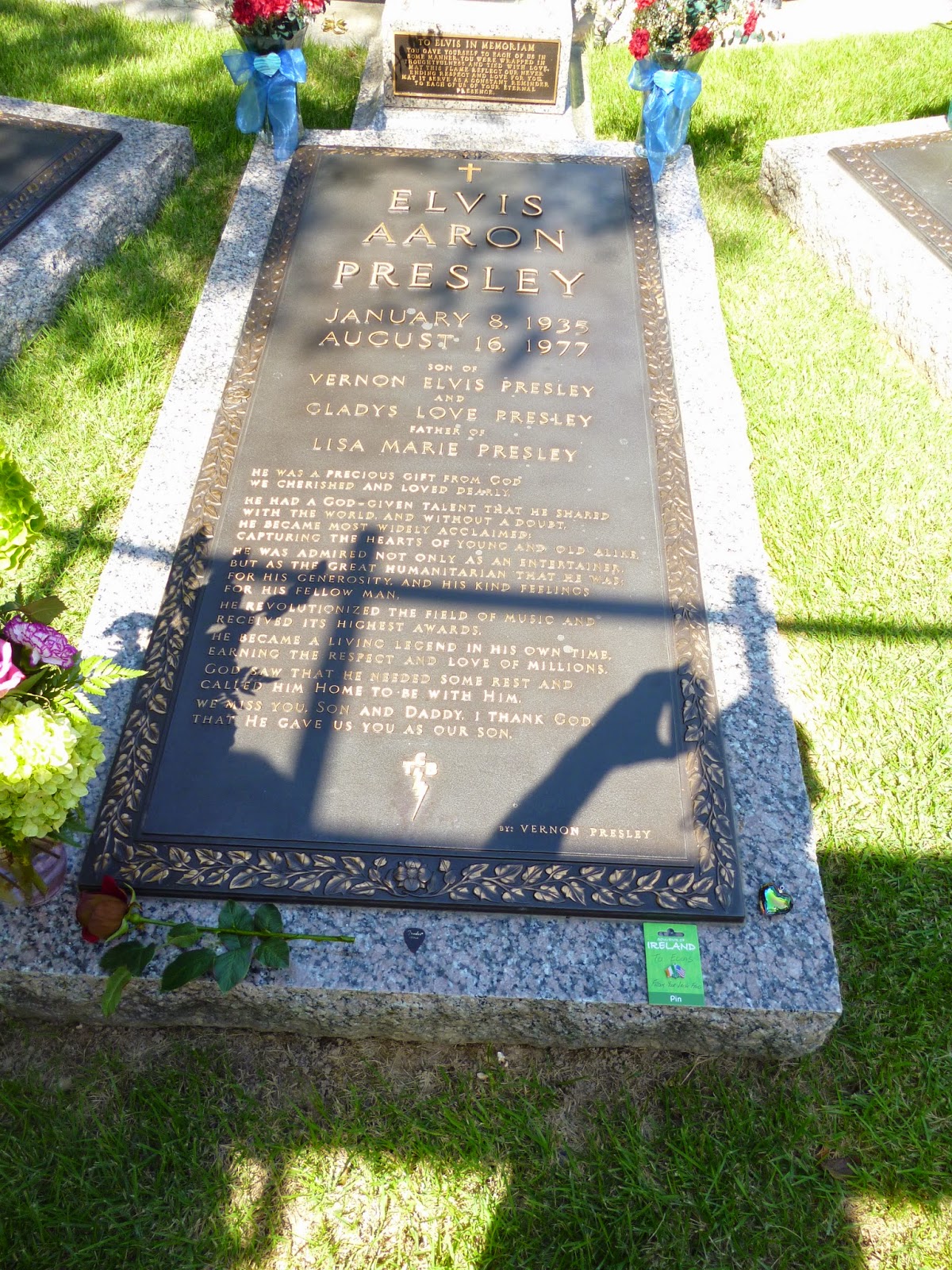 Never knew before that Elvis recorded "Are you Lonesome Tonight" in darkness, but the 'chill of frisson' you felt standing there weirdly put me in mind of the spooked feeling I had the night Elvis died: working in a petrol station in pouring rain, grown men in tears paying for their fuel and "Are you Lonesome" playing on the radio. I was certainly choked up too.

Did you know that you can earn money by locking selected pages of your blog / site?
To start you need to open an account on AdWorkMedia and use their Content Locking plug-in.