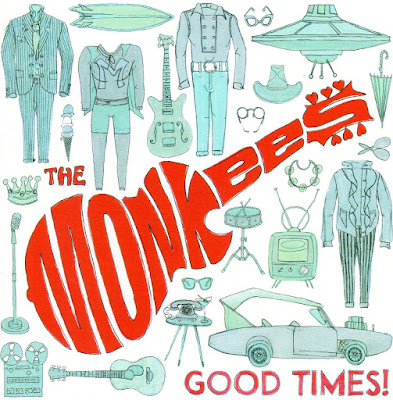 Hey Hey… it really is the Monkees! There have been a number of partial reunions across the years, with varying line-ups, some less convincing than others. This Fiftieth Anniversary project is not only the first to feature all four original members – the late Davy Jones present in the form of a salvaged tape of him singing Neil Diamond’s “Love To Love”, but the first full team effort with all the original writing partnerships too. Harry Nilsson, who wrote “Cuddly Toy” for the Monkees fourth album, writes the title song. Goffin-King, who wrote the “Pleasant Valley Sunday” single from the same ‘Pisces, Aquarius, Capricorn & Jones Ltd’ (November 1967) album, are represented by a banjo-strewn “Wasn’t Born To Follow”, already done by the Byrds and Lemon Pipers but overdue for a retread. Tommy Boyce and Bobby Hart, who wrote most of the platinum-selling ‘The Monkees’ (October 1966) debut LP – including ‘The Monkees Theme’ itself, contribute “Whatever’s Right” with its familiar “Last Train To Clarksville” rush. Peter, Michael and Micky add one new song each. But is it possible to recapture all that stupidly-dumb fun which made them huge way back then?

In 1966, with America’s complacent Pop-domination stunned by the British invasion, the Monkees were the ‘imaginary band’ concocted to be the industry’s high-profile fight-back. Today, assembling a Boy Band is part of the reality-TV machine. Back then, Screen Gems fortuitously formula mix-matched The Monkees following Bob Rafelson and Bert Schneider’s September 1965 adverts in ‘The Hollywood Reporter’ and ‘Daily Variety’. Urban legend has it Paul Williams, Danny Hutton, Stephen Stills (true) and Charles Manson (untrue) failed audition, so – in some alternate universe, “For What It’s Worth” was a Monkees hit, before the group degenerated into a satanic death-cult. 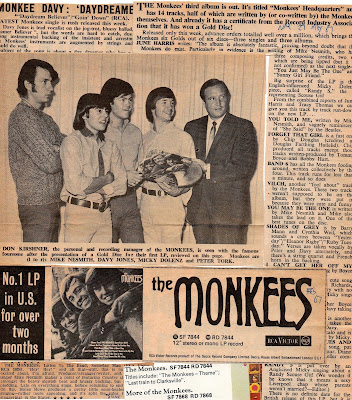 Of course, in ‘A Hard Day’s Night’ (July 1964), John, Paul, George and Ringo play augmented docu-versions of themselves, escaping fan-mania, having comic encounters on the train journey, doing the TV show, but with written-in guests (Wilfred Brambell as Paul’s clean grandfather) and prepared repartee. Liverpudlian writer Alun Owen takes and amplifies their quip-heavy humour, even their speech-patterns, when George says ‘I’m quite prepared for that eventuality’ it’s perfectly pitched to his drawling pronunciation, while the visual-grammar of the “Can’t Buy Me Love” speeded-up Running Jumping Standing Still sequence borrows from Richard Lester’s earlier Peter Sellers project. The film is what they now term Scripted Reality. The Monkees sit-com takes the ‘A Hard Day’s Night’ template one step beyond.

Brian Epstein was scandalised when Joe Orton submitted a proposed Beatles script in which all four Fabs slept together in the same bed. The Monkees play an aspirant Pop group who live together in the same crazy pad, albeit in separate beds. And they drive the Monkeemobile – a modified Pontiac GTO pun on the Batmobile from Adam West and Burt Ward’s Dynamic Duo ‘Batmobile’ that was simultaneously ratings-chasing on ABC. We all knew that singing-drummer Micky Dolenz had been cocky orphan ‘Corky’, getting into scrapes as NBC’s ‘Circus Boy’. But his vocals give “Last Train To Clarksville” and “I’m A Believer” the bite of authenticity. We knew that beneath his trademark woolly hat, Michael Nesmith wrote “Different Drum” for the Stone Poneys – which is Linda Ronstadt, and hence pretty cool. And he would later contrive “Listen To The Band”, one of the Monkees underappreciated gems. We knew that beneath bassist Pete Tork’s gnomic utterances, was a proficient Greenwich Village Folkie.

And because they’re replicating the Mop-Top Beat Group format, the token English addition of Davy Jones makes logistical sense, despite his former TV role as Ena Sharples grandson on ‘Coronation Street’, as a kind of jazz-hands media-brat with an affection for Vaudeville dance-steps. Although Dolenz is always the best front-voice, Davy was nudged to the microphone because teenyboppers think he’s cute. He shakes tambourine and shakes his hair, so his fan-mag approval-rating determines he must sing on Neil Diamond’s “A Little Bit Me, A Little Bit You” – in fact, he’s the only Monkee present on this, the group’s third consecutive American no.1 single. While the jokey dialogue play-in to their fourth and last US no.1, “Daydream Believer” – with Davy asking producer Chip Douglas ‘what number is this, Chip?’, the other Monkees chiming ‘seven-A’, and Davy protesting ‘alright, alright, there’s no need to get excited, man, just ‘cause I’m short, I know’ plays shamelessly to fans protective sympathy. Although later on Davy also sings “Valeri” – another of my favourite Monkees singles. 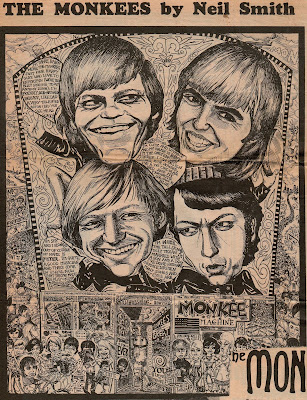 And though the half-hour TV-episodes are now unwatchably bad, the singles were perfect. With some justification it’s pointed out that “Last Train To Clarksville” charted before the TV shows first screened, but from session-player Louie Shelton’s opening ‘Paperback Writer’ Rickenbacker-jangly guitar-figures it was exquisitely-crafted by writers Boyce-and-Hart to do precisely that. This is where Power-Pop began for every Busted, McFly or Vamps. But seldom done better. And as mega-hit album followed album – ‘More Of The Monkees’ (January 1967), ‘Headquarters’ (May 1967) and ‘The Birds, The Bees And The Monkees’ (April 1968), they fight for greater control over their own careers. 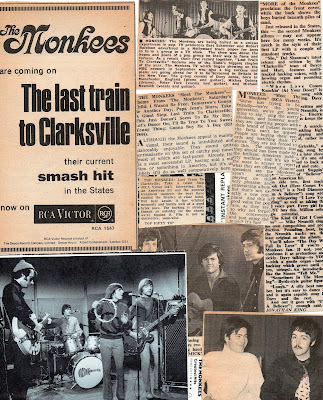 There were a number of partial reunions across the years, with varying line-ups, some less convincing than others. Now, opener “Good Times” immediately announces the intention of ‘dancing in the street again and music everywhere’, with Dolenz duetting with the original 1968 demo guide-vocal that Nilsson did with Mike Nesmith. ‘Instrumental’ quips Micky as the vocals break. Then, ‘with one bound’ XTC’s Andy Partridge’s “You Bring The Summer” incarnates the classic airy sixties-Pop ‘chips and dips and root-beer beach volley-ball ‘dum-diddly-dum-diddy-dum’ song-structure, the fade ornamented with reverse guitar and novelty vocal effects. The third bite by Weezer’s Rivers Cuomo, “She Makes Me Laugh” has the appealing jangle-guitar riff and harmonies that lend themselves to images of the silly video-style antics that were the speciality of their TV-shows.

Mike ‘Nes’ takes vocals for “Me And Magdalena”, changing the pace into a more reflective mood while ‘driving south through Monterey’, before Boyce & Hart’s guitar riff for “Whatever’s Right” pitches it straight back up again. Nesmith’s own “I Know What I Know” is a slow typically “Rio” wordy vagueness with mellotron strings. Adding diversity, or maybe losing focus, Peter Tork’s “Little Girl’ is both as sunny side-up and ‘shining and soft’ as his songs. Davy’s vocal “Love To Love” takes an unmistakably Neil Diamond melody, ‘revisited and completed in New Monkees sessions’. Then original Monkees producer-activist Jeff Barry uses a ‘Hi Heeled Sneakers’ spine for “Gotta Give It Time”. And if Noel Gallagher never got to write for the Fabs, he catches this last train to write “Birth Of An Accidental Hipster” for the Faux Four instead, edging into ‘Head’ (the 1968 movie) territory with Paul Weller and some phased-swoosh effects, tempo-change inserts and false ending.

Micky’s writing contribution – with producer Adam Schlesinger, the party-atmosphere album closer “I Was There (And I’m Told I Had A Good Time)” has that ‘if you can remember the sixties you weren’t there’ vibe, with Dolenz protesting ‘I dropped my sticks’ in the fade-out groove. If Micky does sound occasionally patchy here, and maybe the album total doesn’t quite add up to the sum of its parts, of course it’s not possible to recapture all the stupidly-dumb fun which made them huge way back then, but they get about as close as we could reasonably hope for. As on the spin-off single, receiving heavy Radio Two airplay, when ‘you come around, you bring the summer.’ Hey Hey… they’re no longer the Young Generation, but they still got something to say. 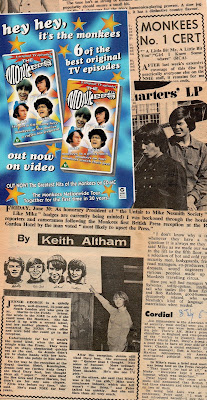 I haven't seen an episode of the tv show for ages. My sister and I used to watch them.

I love their songs--brings back memories or elementary school!

Order a professional Sparkling White Smiles Custom Teeth Whitening System online and get BIG SAVINGS!
* 10 shades whiter in days!
* Professional Results Guaranteed.
* Better than your dentist, for a fraction of the cost.
* Same Teeth Whitening Gel as dentists use.