Poem: 'IF THE PUMP DON'T WORK, DON'T VANDALISE THE HANDLE' 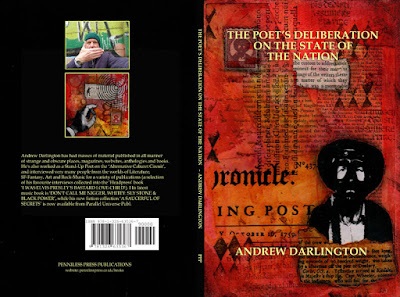 IF THE PUMP
DON’T WORK, DON’T
VANDALISE THE HANDLE…

this poem is expendable,
this poem is not the kind of thing
any right-thinking person
would ever admit to reading,
must we keep flinging this blasphemy
at our rock ‘n’ roll children?
I despise you and everything you stand for,
this poem has outlived its usefulness
this poem is obsolete and
should be humanely put down
in its own sad tawdry squalor,
this poem deserves the merciful
kiss of euthanasia by Dignitas,
to be mourned by widows in black lace
and argued over by outraged tabloids,
please do not read this poem
it will only offend you,
you may be driven to pluck out
your own eyeballs afterwards
in disgust and degradation

this poem is a cartoon of the prophet,
this poem is the winning ticket
in the lottery of the damned,
this poem has downloaded
obscene images from dubious websites
and stored them on its hard-drive,
this poem uses cookies
and knows your most secret passwords,
this poem spits on politicians
and ridicules bishops,
this poem celebrates perverse sexuality
and seeks commercial sponsorship
from human-traffickers, drug cartels
high-street banks and other criminal networks,
this poem votes Republican and is then
discovered with a pre-op transsexual
prostitute in a Midwest motel,
this poem will not reclaim thousands of ££££s
of miss-sold PPI on your behalf,
this poem contains permitted contaminants
including cadmium, MSG, histamine,
rat faeces, trans-fats and insect-parts,
it may cause projectile vomiting
and allergic toxic-shock reactions,
this poem is being investigated for historic
abuse offences by operation yew tree,
this poem includes offensive language
and inappropriate images of
nudity, violence and drug-taking
please don’t ‘Like’ this poem on Facebook
or stream it on your iPad,
forgive me father, for this poem has sinned…


My new poetry book – ‘The Poet’s Deliberation On The State Of The Nation’ (Penniless Press) is now up there on Amazon. From the cover, specially-commissioned from Californian artist Karen Smithey who incorporates my gas-mask image into the art, it’s ninety+ pages of uncollected or unseen stuff, a lot of it previously only glimpsed on websites or Facebook pages such as Ron Androla’s ‘Pressure Press’ or Belinda Subraman’s ‘Gypsy Art Show’. One of the oldest – “Manifesto”, goes back to my 1983 Faber ‘Hard Lines’ flirtation, but dug out anew for the Wakefield Unity Hall ‘100 Poems By 100 Poets’ night from A Firm Of Poets, and with amends, is now uploaded to YouTube. “If The Pump Don’t Work, Don’t Vandalise The Handle” was on the ‘IT (International Times)’ site, while “The Old Man Who Falls Down” is unpublished, a weird-humour tale inflated from a real-life incident walking the towpath in Mirfield last year. I’ve tried for a vague tight-but-loose time-arc around the title-thematic, with hard-edges jostling squelchy chaotic-sex…. because it’s impossible to escape this planetary absurdism.

I'm so excited about creating the cover for your book, Andy--can't wait to read all your wonderful poems!!!

this poem is a bit of a mirror.

Do you need free Facebook Likes?
Did you know you can get them ON AUTO-PILOT & ABSOLUTELY FOR FREE by using You Like Hits?