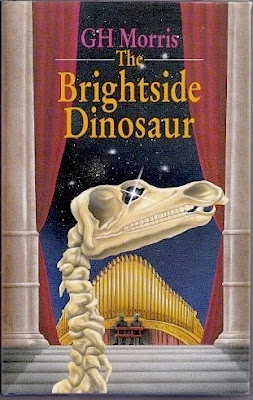 
This is 1930s Yorkshire. A deranged and oddly beautiful collision impacting ‘Brass’ remixed by Ivor Cutler, with ‘Last Of The Summer Wine’ re-edited by Groucho Marx, all shot through with a bric-a-brac surrealism of rare and wonderful incidents. Bagshaw Moralee, a naturalist in Java, sends Leeds colleague Thomas Quekett the body of a Bird of Paradise, but for ease of packaging he removes the legs. Quekett, imagining this to be the bird’s natural state, writes an essay for a learned ornithological journal speculating on ‘how this wonderful bird would have to spend the whole of its existence on the wing… suspended without legs, forever shimmering his feathers in the hot Javanese air.’ Correspondents write ‘congratulating the journal, congratulating Quekett, and eventually congratulating god himself on this creation of such breathtaking beauty, such a strange addition to all of His diversity.’

The third instalment of a trilogy meandering through the convoluted evolution of the eccentric Family Brightside – following ‘Doves And Silk Handkerchiefs’ (1986), and ‘Grandmother, Grandmother Come And See’ (1989) – this volume advances Leeds-born Morris’ epic in irregular spurts and via strangely contorted side-routes from 1931 to 1947, from an earthquake in Manchester to a tidal wave in Blackpool. Episodically it concerns a brothel raid, a dinosaur museum exhibit made up in equal parts from the inextricably jumbled remains of an iguanodon skeleton and the bones of its discoverer, collier James Brightside, plus a man with rotating eyeballs who invents an invisibility machine, and the later invention of rubber suiting which – once inflated, allows children to float ‘the sky like planets’. There’s also a zoo-keeper who cooks and eats his way through all the animals in his charge, discovering that ostrich makes you fart!, and a man with a permanent erection who chooses to hide inside a barrel exposing his affliction through a carefully prepared bolt-hole in its side. Broken by dialect passages and set in a pit village, ‘The Brightside Dinosaur’ achieves a reality heightened and intensified into an absurdism that makes well-drawn Yorkshire as alien and exotic as the weirdest South American rainforest. An essay in Magical Realism from a curiosity shop crammed rafters-high with fascinating antique oddities, arcane wisdoms, and intricately contrived comic anecdote.
Posted by Andrew Darlington at 15:02