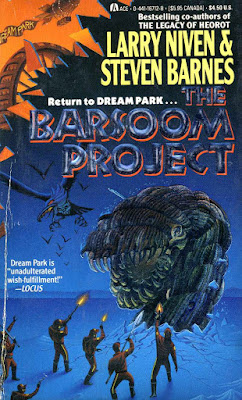 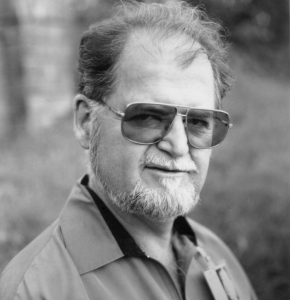 SF-heads of long standing will recognise ‘Barsoom’ as the planet Mars in Edgar Rice Burroughs’ fantasia, a world of dazzling swordplay, beautiful oviparous princesses, and heroic derring-do in ancient cities set like wondrous jewels on dry sea-beds. The ‘Project’ is a scheme for magiking the real lifeless Mars of today’s Viking Lander, through a controlled terraforming process, into the planet Burroughs’ protagonists knew. But there’s more. Niven & Barnes stated intent is to ‘blend dozens of individual threads of information into one seamless tapestry,’ and the Martian strand is only one…

Laurence Van Cott Niven – to give him his full name, writes ‘hard SF’. ‘His scientific extrapolation is based solidly in what is known at the date of writing,’ according to Harlan Ellison in ‘Dangerous Visions’ (1967). And this follow-up to his ‘Dream Park’ (1981) collaboration continues many of the earlier novel’s preoccupations. It’s set in the same stately pleasure dome designed by Richard and Mitsuko Lopez, most brilliant of all Game Masters. The same computer-generated holographic ‘Disneyplanet’ in which ‘reality has become almost optional.’ In which hazardous maze-games are played through a menacing puzzle of bizarre environments designed to test and stimulate. ‘Dream Park’ is an entertainment complex that TV’s ‘Tomorrow’s World’ would call interactive virtual reality, enhanced to the nth degree and cross-matched to the greatest Fantasy Gaming role-play on the market. So – although dealing mythworlds, trading the Melanesian culture of the original novel for the Inuit Eskimo pantheon of the Fimbulwinter, Niven can conjure a scenario set in ‘the winter wonderland of an arctic day at the end of the world,’ release the goddess Sedna imprisoned by the ‘sins’ of Western decadence in a vaguely Green trial sequence, and battle the evil Cabal in Cthulhu’s Lovecraftian city of R’lyeh, and yet still remain essentially within Ellison’s parameters. 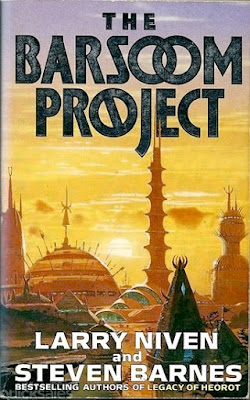 Steven Barnes has other duo novel-shots with Niven to his credit, and also created some animated sequences for the Gene Kelly/ Olivia Newton-John movie ‘Xanadu’ (1980). In the ‘Dream Park’ books he helps choreograph a huge 3D Dungeons & Dragons, populated with REAL dragons – the hideous Mountain Trolls, burrowing Mammoths, the ‘grotesquely wormlike’ Terichik, and Killer Land-Whales that walk on sets of human hands! But, of course, there are also glitches, sabotage, espionage, things go wrong, and people get Killed instead of just ‘killed’. It’s a compendious tale with stories within stories flickering in and out of the text uncertainly, overlapping ‘real’ with Dream Park ‘illusion’, and retaining yet further levels of possibility that are only hinted at. ‘Who was to say that there weren’t trolls in those tunnels, demons in those depths? Perhaps the real illusion of Dream Park was the pretence of technology?’

Our SF-heads of long standing will realise that none of these ideas are particularly new. Such role-play machines have been postulated since before Niven and Barnes were sperm and ovum. But they write it well, alternating vivid descriptive power with an off-beat humour in which one player ‘donned her persona like a second skin – like a body condom, and it wouldn’t come off’! 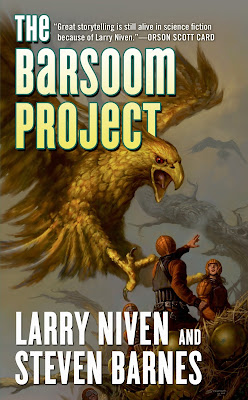 Posted by Andrew Darlington at 16:56

Follow our trades NOW and gain up to 270% daily.