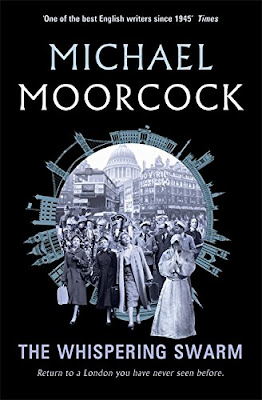 RETURN TO A LONDON
YOU HAVE NEVER SEEN BEFORE…

Michael Moorcock is more a continuum than a single defining work. Some make claims for ‘Behold The Man’ (1969). Personally I loved his ‘Dancers At The End Of Time’ (1972-1977) series. While he’ll he remembered as the creator of brooding albino sorcerer ‘Elric Of Melniboné’ and multi-dimensional Jerry Cornelius, described here ‘as much a technique as a character’. But to select just that one book is problematic.

There’s a magically hidden London street called Diagon Alley in the Harry Potter mythos, which the tyro wizard visits by passing through ‘The Leaky Cauldron’ inn. There’s also a concealed quantum Trap Street in ‘Dr Who’, an alien refuge where the lovely Clara Oswald (Jenna Coleman) is temporarily killed. Moorcock’s Alsacia resembles neither. But, as Brian Aldiss perceptively observes, ‘when one is hard up for secret worlds, one can find them under the Earth, in a puddle, in an atom, up in the attic, down in the cellar, or in the left eyball: and all of these vantage points have been explored by hard-pressed fantasists’ (in ‘Billion Year Spree’, 1973).

This book is probably as close to the fractured Michael Moorcock autobiography as the avid reader is ever likely to get. It’s all here in dense lucid detail. His insider insights into the austerity post-war Welfare State years. A description of Fleet Street at its full power brought alive in taste and smell, so tactile it’s real. He brings the inside out. Those with a fleeting familiarity with Moorcock’s life-story will recognise references to his teenage fanzine ‘Burroughsiana’, graduating to him becoming Fleet Street’s youngest editor of Westworld’s ‘Tarzan Adventures’ comic. 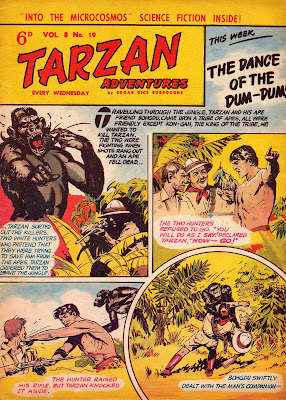 The revelations are delicious, in chunks of conversational anecdote, with unexpected lunges of throwaway prescience about how he ‘almost died in Texas’, or swipes at the Thatcher-Reagan regimes to come. With contentious claims about those rationalist mid-century decades when atheism was taken for granted, before the resurgence of various fundamentalisms marked a return to dark superstitions, or how his was the last self-educated pre-Google generation. Meanwhile, he visits ‘The Globe’ pub, the famous SF watering-hole where writers gather, and he turns in candidly recognisable pen-portraits of the likes of John Brunner, Ted Carnell – ‘dapper in his fashionable casuals, with a Ronald Colman moustache’, and ‘rangy six-foot-three-inch raconteur’ Ted Tubb. This escalates to conspiring with Jim Cawthorn on early plans for something resembling what ‘New Worlds’ would become. Taking elements of SF, and evolving it into new relevances. Although, as far as SF itself, ‘I had no particular interest in the genre beyond what was useful to me.’ This at a time when ‘I was growing quickly bored with Science Fiction, which had never been my first love,’ because ‘I really didn’t like space. Space bored me.’ 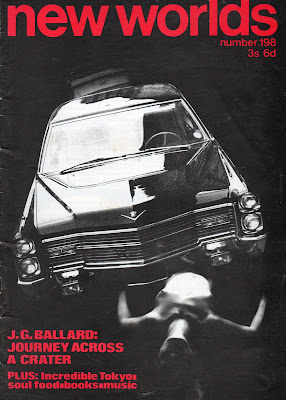 But there are oddnesses too. Who is writer ‘Jack Allard’? a recurring and respected presence. Until he publishes a thinly disguised ‘The Savagery Show’ (‘The Atrocity Exhibition’), and the suspected penny drops. Allard is Ballard, just as Malcolm Bix, his editor at ‘Ajax’, is Martin Bax of ‘Ambit’. And Hilary Bailey’s brilliant alternate history “The Fall Of Frenchy Steiner” (in ‘New Worlds’ no.143, July 1964) becomes Helena Moorcock’s “The Haul Of Frankie Steinway”. Why this partial evasiveness, why this subterfuge? Is it simple game-playing, or will revealing JG Ballard in some way violate contractual confidences?

But things get decidedly odder. After the young Moorcock is visited by Sam, a smart-ass wisecracking raven, he checks the carpet for bird-shit. And there’s the oaken gates to Alcasia itself, encountered when he ‘turned the corner into Whitefriars Street off Greystoke Place into Carmelite Inn Chambers’. Check your London A-Z. As this is a Michael Moorcock novel the automatic assumption must be that this fabulous harbour, where ‘time and space were truly skewed’, accesses another plane of the multiverse, and that Moorcock is writing himself into his own mythology as a further aspect of the Eternal Champion. ‘Kafka, indeed.’ He becomes Master Maur’s Cocke, in a place where ‘time goes backwards and forward’. He’s initially sceptical. Has he surreptitiously been dosed with LSD by the White Friar in Ludgate Hill’s ‘ABC Tearooms’? Or is the spliff he’s been toking responsible – or is it just a ‘psychotic episode’? Aldiss paternally advises him to lay off the wacky backy.

It all conspires. The Sanctuary lies within a maze of streets between Fleet Street and the Thames. The realm of Carmelite monks with pre-Christian roots and not only a pantheistic but pan-dimensional bent. He first encounters Friar Isidore while proofing ‘Tarzan Adventures’ pages at the typesetters. From there he’s drawn into a parallel reality where the comic-strips he’s been scripting come alive. An elision of real historical, and fictional. Dick Turpin, The Three Musketeers, Kit Carson. 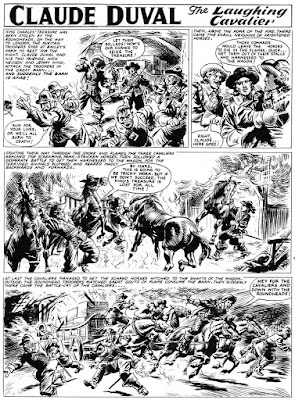 And Captain Claude Duval. I avidly followed the exploits of the Laughing Cavalier highwayman stripped in colour-frames across the ‘Comet’ centrespread. Even then I suspected that the politics was not quite right. The dowdy Puritan Roundheads were, after all, establishing the supremacy of a People’s Parliament. The Cavaliers might have more flamboyant satin-and-tat fashion sense, but they fight to support the dead hand of absolute monarchy. Moorcock, in his own feathered hat and hippie regalia, has similar qualms, yet finds himself aligned with the royalists.

More central is Meg/ Moll Midnight, both a Robin Hood highwaywoman with a social conscience – ‘holding up brass-and-steel electric double-decker trams’ who becomes his lover, and the subject of his profitable run of ‘historical’ text-tales for ‘Tiger’ and fiction-strips in ‘Lion’, as well as a ‘Thriller Picture Library’ edition titled ‘The Haunted Blade’. Was there ever such a theme character? I read ‘Lion’ at the time. I don’t recall her being there. Check out Moorcock’s own retinue of scripted characters in his other oblique foray into autobiography – ‘The War Amongst The Angels’ (1988, Orion 1996), and she’s not there either. 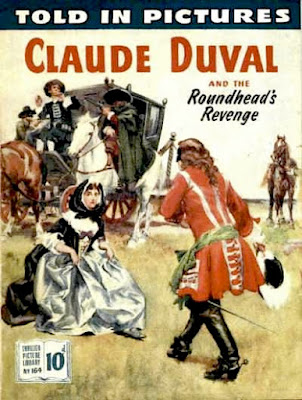 Sometimes the rationalist Moorcock himself doubts Alsacia, as acid hallucination, ‘where coke and speed met the Mary Jane and wine’, or some psychic outgrowth of his own subconscious. ‘It was almost as if I’d brought them to life myself; conjured them from thin air. Maybe I was addicted to these inventions now like a smoker to nicotine?... I had such a lot of questions. Many I was reluctant to ask. Could I really make a world? Were all these people just shadows of my childhood imagination? What we called ‘ghosts’?’ Or the teasing suspicion that ‘we are protagonists in our own novels’, but ‘was I now a character in someone else’s fiction?’

As ‘New Worlds’ begins its iconoclastic New Wave phase, fighting the censorial instincts of WH Smith, he’s also married, living in the burgeoning counter-culture milieu of what he’s elsewhere termed ‘Mother London’. As if his shared life with Molly in Alsacia is a metaphoric elaboration of extramarital complications. A coded infidelity. The separate-worlds confabulation that illicit lovers self-lie in mitigation and guilty justification. The narrative smoothly elides both of these parallel lives, Moorcock the hack-writer up-gearing into novels, married to Helena with two growing daughters, Sally and Kitty. And Moorcock standing sword-in-hand to defend the Alsacia from Roundhead incursions, shoulder-to-shoulder with Prince Rupert of the Rhine and his loyal dog Boye. In a London that time forget where the monks have a quantum Cosmolabe, and a Fish Chalice that might or might not be the Holy Grail. And his awareness of the irony of being a writer of fantasy, caught up in a fantasy only a no.15 Routemaster bus-ride away from Ladbroke Grove.

There’s a long detailed attempt launched by Prince Rupert to rescue King Charles I from the beheading block, which metamorphoses into spiriting the Yoda-like ancient Chief Rabbi Elias over the frozen Thames to safety in Amsterdam. Moorcock, it seems, has a ‘second sight’ talent for ‘stepping over dimensions where the Black Aether ran like a deadly tide.’ He utilises silver roads to a conjunction of worlds, nested one-inside-the-other, where he plays Tarot and agonises over the religious conundrums set up by the Alsacia’s impossibility. There’s a considerable amount of dubious pantheistic spirituality and rumination about the being or non-being of a supreme god. ‘Part of me was a sceptic – even a cynic, but part of me was also romantic and gullible.’ Who knew?

‘The Whispering Swarm’ of the title is a kind of tinnitus that attacks him whenever he attempts to leave Alsacia. While the novel, although a defining departure, remains very much part of the Moorcock continuum. Much of it would be incomprehensible to a browsing reader without at least a prior awareness of its protagonist’s real-life epic journeys. Yet its teasing conundrums bedazzle and intrigue those who already consider themselves devotees. 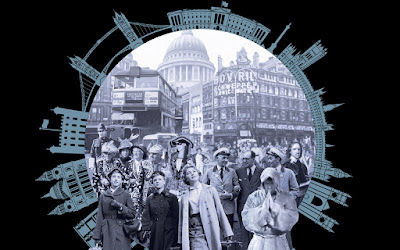 Posted by Andrew Darlington at 21:47

As a Pro Tarot Reader and Psychic Empath - I am able to assist you, RIGHT NOW, regarding the crucial happiness of your TRUE heart. And the first words I wish to say to you are:

Love light & blessings to you!