CD: 'Down To Reverie' by Robin Adams

“Midnight I” is a haunting psychedelic blur of ‘backwards uke’, like it’s something torn loose and adrift in time where ‘echoes of eternity go by/ they pass within the flicker of an eye’. Personally, I’d have liked some more of that sonic oddness. His sleeve-shot shows Glaswegian Robin dwarfed by the loom of his own huge shadow. Maybe that’s a clue. His MySpace influences assemble a line-up of the usual suspects, Kerouac, Dylan, Elvis, Robert Johnson, Ginsberg, Neil Young. And he sings with the effectively ragged nasal slur such a genealogy would suggest. “Down To The Water” has a melancholy bleakness emphasised by sparse unaccompanied phrases, with the elemental forces of fire and water used as metaphors for cleansing. In fact, he’s unafraid to meet the grand metaphor head-on, and dialogues with a for-real angel on the title-track, then tackles the big issues of death, guilt, and Social Darwinism (“Hide Away”). “When Your Light Goes Out” is a Dylan (Thomas) ‘raging against the dying of the light’, harmonising, or maybe double-tracking, with a the kind of anthemic potential to fill stadiums. Sure, the accordion on “World Burns On” might be lacerated by sharp rasps of Dylan’s harmonica and ‘long-distance information’ lyric-reference, while “Days Of Easy” does that lyric-torrent cascade with tasteful violin, but it’s alright Ma. Like other strong recent CD’s by Billy Pryce or Joe Wilkes it’s less retro, more betraying elements of a timeless Beat continuum that’s forever new. 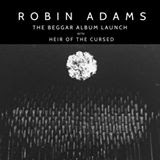