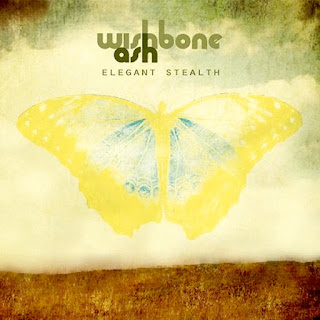 Wishbone Ash. The very name prompts brain-storm flashbacks of squatting mud-slick in 1970’s Festival mosh-pits blitzed by hyperactive decibel-overload. They were massive round about back then. But you were spoilt for choice. Riffing metal bands were everywhere. Budgie. Saxon. Judas Priest. Paladin. Uriah Heap. The Ash’s crowd-pleasing twin-lead guitar-attack, as showcased on mega-selling albums ‘Argus’ (1972) and ‘There’s The Rub’ (1974), gave them an edge. And forty years later, they’re still here? If you’re a musician and you’re serious about what you do, that’s what you do. You play. Every so often you issue an album, a diary of your mind-set. A bunch of your latest material. Some verse-chorus-verses strung around intense soloing. A process that builds into a back-catalogue. 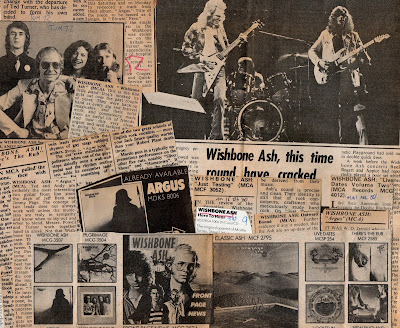 For Wishbone Ash there’s been a cycle of personnel changes. But a continuity too. ‘Elegant Stealth’ is their twenty-third studio album. With founder Andy Powell still there on guitar and lead vocals, alongside a stable three-year line-up of Muddy Manninen (guitar, vocals), Bob Skeat (bass, vocals), and James Crabtree (drums and percussion). Opener “Reason To Believe” is not the Tim Hardin classic, but an essay in dexterously-crafted dueling guitars gliding together and playing off against each other in seemingly effortless cryptic codes across leaden drums. There’s a remix version of the same song by Al Carson included as a hidden bonus track. But – fear not, there’s a little stuttering echoplexing, a clattering fade-in fade-out techno-beat, but nothing too radical to scare the lumpen fan-base.

And nothing quite as experimental elsewhere, although Deep Purple’s Don Airey is on hand to add Hammond B3 organ textural depth to Muddy Manninen’s “Mud-Slick”, an instrumental showcase with echoes of Purple’s ‘Strange Kind Of Woman’ in its rhythm-grid. And Pat McManus from Irish band Mamas Boys scribbles fiddle all over his own stand-out composition “Can’t Go it Alone” which flirts with reels but swiftly devours it all in heavy intense soloing around a relentless Marc Bolan ‘Children Of The Revolution’ spinal riff, then breaking into scat-vocals ghosting the ascending guitar figure. Further in, there’s Andy Powell’s sweet jog-along solo composition “Give It Up”, with all other songs created collectively by the group, its historic legacy ensuring awesome levels of technical proficiency, from the stalking bass of “Warm Tears” to the acoustic breaks on “Man With No Name”.

Powell’s voice is efficient rather than outstanding, but it’s enforced by haunted paranoid guitar-effects on “Heavy Weather” where he’s predicting all manner of carnage to come beyond the event-horizon, elevated by what sounds to be punching horns. And there are upgrade shots at lyrical relevancy with “Big Issues” voicing street-sleeper grievances over slap-bass and thumping drums, in which he’s threatening arson at lying politicians (is there any other kind?). And a sympathetically well-intentioned “Migrant Worker”, with wah-wah guitar. “Searching For Satellites” is better, its vaguely autobiographical lyric addressed to the ‘fellow travellers’ ‘faithful followers’ and ‘friends from my youth’ who saw the band’s ‘star rise’ and were part of their story ‘in our time under the skies’ – and what conclusions emerge from the rippling guitars and reflective mood-changes? There’s only one answer, and the answer is ‘Love’. Closing track “Invisible Thread” opens with a slow insistent build leading into scintillating conversational interplay of elegant rhyming guitar figures and practiced eighties smooth-harmonies over its ponderous back-beat. In other words, mainstream AOR. Long decades, but a logical evolutionary development from those mega-selling 1970s albums. But fashion’s a strange thing, it needed no more than a fortunate TV-slot to resurrect the long-lapsed career of Journey. And for the Ash, chances are, if you liked them back then, you’ll like this now. 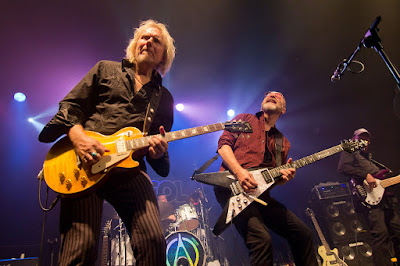 Posted by Andrew Darlington at 10:44