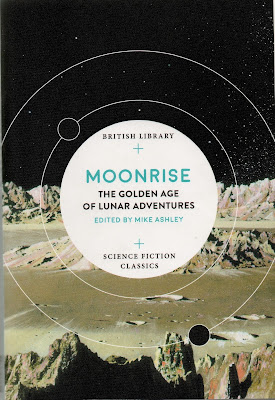 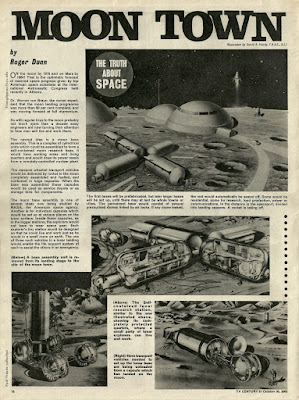 Neil Armstrong’s small step for all mankind proved just as much an extinction event for the first-man-on-the-moon sub-genre of Science Fiction, as Yuri Gagarin had earlier killed off the first-man-in-space equivalent. Both thresholds had been fictionally crossed countless times before, although very few of the imaginings came anywhere close to the reality. And afterwards, there could be no more.

The Moon is not a balloon, neither is it composed of cheese, as in Wallace & Gromit’s ‘A Grand Day Out’ (1989). And there are no Clangers there. Mercury and Venus have no moons, although Leigh Brackett wrote a beautiful story about Venus, “The Moon That Vanished” (in ‘Thrilling Wonder Stories’, October 1948). Mars has two small moons, probably captured asteroids, which hasn’t hindered their fictional use across the decades, witness the Mike Ashley-edited companion volume ‘Lost Mars: The Golden Age Of The Red Planet’ (April 2018). But Earth’s Moon is so obviously and inescapably THERE that’s it’s probably been the subject of fantasies for as long as there have been fantasists. 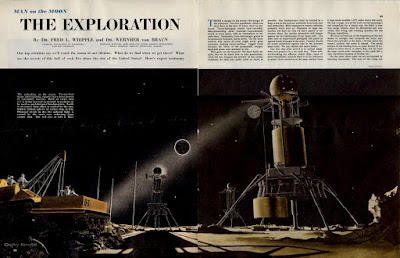 As Mike Ashley’s notes point out, Arthur C Clarke was a member of the preposterously self-titled ‘British Interplanetary Society’ when human aeronautics was barely in its infancy, and he wrote “We Can Rocket To The Moon – Now!” for ‘Tales Of Wonder’ (no.7, Summer 1939). The BIS saw Science Fiction as the Promotional Public Relations department for the advocacy of Space Travel. Perhaps their enthusiasms set expectations too high? John Wyndham’s “Idiot’s Delight” (aka “The Moon AD2044)” is a rather tedious procedural excerpt from his ‘The Outward Urge’ (1959), the future history of the Troon family tree. But he was prescient enough to recognise the Space Race as less the quest for knowledge, and more the spin-off from superpower confrontation. The reason the US brought the Apollo Programme to a close was because the USSR had prematurely pulled out first. Once the ticker-tape parades and gosh-wow wall-posters and TV-coverage had run its course, there was no incentive for more. So there was no more. The moonscape was left to its desolate splendour. If, as Wyndham’s tale postulates, the Cold War persisted long enough for the Soviets to establish a lunar base – on the flawed perception that whoever has warheads on the Moon can target Earth with impunity, the Americans would have been compelled to respond with a base of their own. The addition of a British base is more dubious, in light of our grudging participation in the European Space Agency, and our face-saving celebration of Brit-astronauts hitch-hiking to the International Space Station from the Baikonur Cosmodrome. 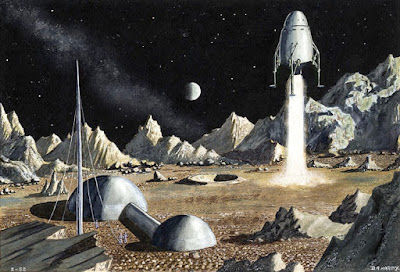 Yet there’s truth in the quote from Clarke’s ‘The View From Serendip’ (1977) which Mike Ashley repeats, that ‘I’m sure we would not have had men on the moon if it had not been for Wells and Verne and the people who write about this and made people think about it.’ And that’s where the anthology begins. The startlingly good “A Visit To The Moon” – extracted from George Griffith’s ‘A Honeymoon In Space’ (1901), precedes HG Wells’ ‘First Men In The Moon’ (1901), and anticipates some of its ideas. Griffith’s Lord Redgrave and his young wife Zaidie use an airship powered by antigravity to reach the Moon, just as Cavor does. The Moon is an ancient dying world… and it would remain so in much subsequent fictions. Griffith’s ‘Astronef’ airship discovers a dead city of white-bleached bones and skulls on the Tycho plain, then descends deep into the Newton crater to where air and water remain sufficient for devolved life-forms to survive. It’s a scenario elaborated by Wells into his complex Selenite culture, described here in the lengthy closing chapters. Unwisely, Cavor’s honesty ensures that he tells the Grand Lunar the full human history of atrocity, warfare, pogrom and genocide, earning Earthlings their instant enmity. Much later the ‘First Men In The Moon’ movie uses a cunning continuity loop, in which the United Nations launches a 1964 multinational spacecraft, believing themselves to be the first lunar explorers, only to discover a Union Jack flag already there, planted by Cavor (Lionel Jeffries) and Bedford (Edward Judd), leading into Nigel Kneale’s screenplay reiteration of Wells’ original story.

William F Temple’s “Lunar Lilliput” from Walter Gilling’s ‘Tales Of Wonder’ (no.2, Spring 1938), despite its occasional silliness, features Larn – the last Lunarian of the Gend race, his demise brought about by the arrival of Temple’s gender-mixed Interplanetarian crew into this Moon ‘Alice In Wonderland gone crazy’. While even Arthur C Clarke persists in the idea – no longer acknowledged anywhere, that the Moon once had oceans. Begging the question, when was it last possible to write about, even primitive life-forms on the Moon? Captain WE Johns’ crew of the vertical take-off ‘Spacemaster’ find lunar life in ‘Kings Of Space’ as late as 1954. 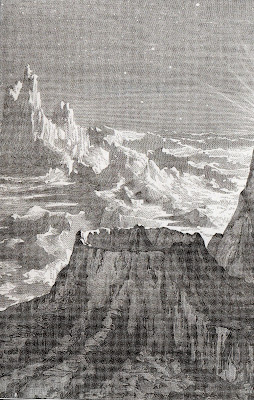 But this anthology celebrates ‘The Golden Age Of Lunar Adventure’. The cover-art is by Chesley Bonestell. The frontpiece by Camille Flammarion. There is fiction by Judith Merril humanising the first lunarnauts. There is lost astronomical infotainment from John Munro (“Sunrise On The Moon”), a ‘Cold Equation’ variant about a stowaway on the first moon-bound rocketship, in Charles Cloukey’s “Sub-Satellite” (rescued from ‘Amazing Stories’, March 1928), and two by giants of the pulp era. In “Nothing Happens On The Moon” by Paul Ernst (‘Astounding SF’, February 1939), Emergency Moon Station RC3 is attacked by a monstrous creature hatched from an asteroidal space-egg. And in “After A Judgement Day” by Edmond Hamilton (‘Fantastic Stories Of Imagination’, December 1963), the Lunar Station plans for human culture to survive as the Earth is decimated by extinction-level plague. Plus Gordon R Dickson and the Arthur C Clarke story which kicked off the entire ‘2001: A Space Odyssey’ mythology.

All anthologies are grab-bags restricted by availability and pagination, it’s impossible to include everything the editor might wish to collect. This is a wonderful head-spinning compilation. But there’s a wealth more of lunar fiction in the archives of forgotten old pulp magazines. Among my suggestions would be the beautiful strangeness of Jack Williamson’s “The Moon Era” from ‘Wonder Stories’ (February 1932), which uses the ‘Conway Effect’ gravity-reversal space-time machine to reach the ancient living moon where the alien Mother flees from a machine-race called the Eternal Ones. And EC Tubb’s “Window On The Moon”, a power-espionage thriller serialised in three parts in ‘New Worlds’ (April, May and June 1963). Here, there are American, Russian and Chinese bases, all armed Cold War strongholds spying on each other employing assassination and sabotage, while a British base is unique in having huge panoramic windows facing the globe of Earth, but is also developing ABIC, an insane organic computer. There’s a character called Seldon – a conscious echo back to Isaac Asimov, a spaceship name ‘Enterprise’, and the visible image of Earth ‘to remind us of our humanity… in case we should ever be tempted to forget.’

All of which proves that there’s still life, of sorts, on the Moon, long after Neil Armstrong’s small step for all mankind.