Jackie DeShannon: When She Walks In The Roon 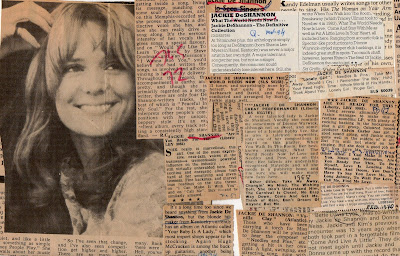 WHEN SHE WALKS
IN THE ROOM

When “Bette Davis Eyes” topped global charts in 1981 the one-time screen siren excitedly phoned singer Kim Carnes to express her thanks, whereas the credit really should have been directed at songwriter Jackie DeShannon. John Tobler’s liner-notes term her Rock’s first notable female singer-songwriter – which neatly overlooks Carole King, and Jackie’s occasional co-writer Sharon Sheeley (they wrote Brenda Lee’s hit “Dum Dum” together), but it’s close enough. Although she wrote “When You Walk In The Room” for the Searchers and “Come And Stay With Me” for Marianne Faithfull, ironically her own breakthrough hit came with the syrupy tuneful “What The World Needs Now Is Love” – a ‘Billboard’ no.7 in June 1965, from the tired old Bacharach-David duo, until her co-written “Put A Little Love In Your Heart” took her up to no.4 in July 1969.

On a 1964 ‘American Bandstand’ interview Dick Clark asks a mini-skirted Jackie which is most important to her, writing or performing, and she tells him ‘I started as a singer, and singing is my whole life. But I don’t know how I would choose because writing is so much a part of me. When it came right to the nitty-gritty, I take singing.’ Which is unfortunate. She has a great light and expressive voice, but great voices are not uncommon in Pop-Rock. Fine original songs are the real gold-dust. And if this two-CD package is padded out with too many covers – who really needs another “Puff The Magic Dragon” or Petula Clark’s cheery “Call Me”? there are four full LPs here – ‘In The Wind’ (1965), ‘Are You Ready For This?’ (1967), ‘New Image’ (1967) and ‘What The World Needs Now’ (1968) – forty-eight tracks, so even after a little judicious whittling it’s wonderful value whichever. Kentucky-born Jackie starts out long hair ablowing acoustic-Folkie with three Dylan songs (including rare Broadside “Walkin’ Down The Line”), some tasty twelve-string, and her own exquisite “Don’t Turn Your Back On Me” which is the best hit the Searchers never had. But the timbre of her high pure voice excels even on the mediocre later material drenched in Bacharach orchestration.

‘Variety is something that everyone thrives on’ she told ‘Melody Maker’. ‘I’m gospel at my roots, but then I fall into Folk, and then I’ll do “Don’t Think Twice”, and suddenly I’ll feel soul. I’ll do a gig that’s all acoustic, then one with heavy R-and-B content, then into very light, very mellow things. Laid back days can be good too’ (22 July 1972).

And her original songs are exquisite. 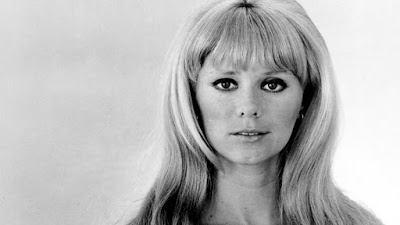 1961 – Brenda Lee cuts Sharon Sheeley-Jackie DeShannon’s “So Deep”. Jackie’s songs are notated as sheet-music by David Gates. Issued as ‘B’-side of January 1962 single ‘Break It To Me Gently’

1964 – original version of DeShannon-Sheeley’s “Breakaway” by Irma Thomas as ‘B’-side of hit ‘Wish Someone Would Care’, but later becomes a no.4 UK hit in its own right for Tracey Ullman in 1983

August 1964 – the Beatles second American tour, with support acts the Righteous Brothers, and Jackie DeShannon after her ‘Needles And Pins’ catches the ear of Brian Epstein 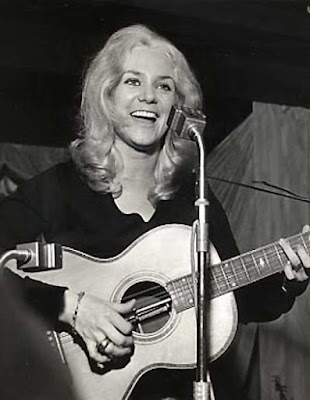 1965 – Jackie DeShannon LP ‘In The Wind’ (Imperial mono 9296) with Jackies own ‘Don’t Turn Your Back On Me’, her arrangement of the Trad ‘Oh Sweet Chariot’, three by Bob Dylan (‘Blowin’ In The Wind’, ‘Walkin’ Down The Line’ and ‘Don’t Think Twice, It’s Alright’, plus Eric Von Schmidt’s ‘Baby, Let Me Follow You Down’ as featured on ‘Bob Dylan’ 1962 LP), Pete Seeger’s ‘If I Had A Hammer’, Bobby Darin’s ‘Jailer, Bring Me Water’, Jack Nitzsche and Sonny Bono’s ‘Needles And Pins’, Trevor Peacock’s ‘Little Yellow Roses’ (by the TV actor from ‘The Vicar Of Dibley’), Hedy West’s ‘Five Hundred Miles’ and Peter Paul And Mary’s hit ‘Puff The Magic Dragon’

1966 – Jackie DeShannon LP ‘Are You Ready For This’ (Liberty LBY 3085) ‘Record Mirror’ says ‘she really is marvellous, this girl. One of the most expressive, near-jazz, voices in the business – a tremendously powerful influence on the industry… yet still virtually unheralded here’, ‘NME’ says ‘using several gimmicky effects, Jackie manages to make this a restless sounding LP, with plenty of rocking backing in the background.’ With Jackie’s own ‘Are You Ready For This’, ‘To Be Myself’, ‘Love Is Leading Me’ and ‘Find Me Love, plus Bacharach-David ‘Windows And Doors’, ‘So Long Johnny’ and ‘To Wait For Love’, plus ‘Call Me’ (Tony Hatch). ‘I Can Make It With You’ (Chip Taylor), ‘Music And Memories’ (Bert Keys, Charles Singleton), ‘Will You Love Me Tomorrow’ (Goffin-King), ‘You Don’t Have To Say You Love Me’ (Dusty Springfield’s hit)

1968 – LP ‘Jackie DeShannon: Great Performances’ (Liberty LBS 83117E) a compilation including ‘When You Walk In The Room’, ‘What The World Needs Now Is Love’, ‘Needles And Pins’, ‘NME’ says ‘her talents are undeniably recognised Stateside and all she needs is a publicity boost and I’m sure she will make many new fans here’

1968 – Jackie DeShannon LP ‘What The World Need Now Is Love’ (Imperial LP 12404) with only ‘Where Does The Sun Go?’ by Jackie herself, plus Burt Bacharach-Hal David title song, ‘So Long Johnny’, ‘Windows And Doors’, ‘A Lifetime Of Loneliness’ and ‘To Wait For Love’, plus ‘You Don’t Have To Say You Love Me’, ‘It’s All In The Game’, ‘Changin’ My Mind’, Bob Crewe-Gary Knight’s ‘Everything Under The Sun’, ‘Little Yellow Roses’ and Petula Clark’s hit ‘Call Me’

1969 – “Put A Little Love In Your Heart” (US Imperial 66385) written by Jackie with her brother Randy Myers, with Jimmy Holiday. Her chart breakthrough, reaching no.4 on the US Hot Hundred. The song is later recorded by Annie Lennox with Al Green, the Dave Clark Five, Andy Williams, Cilla Black, Dolly Parton… and Leonard Nimoy

1971 – Jackie DeShannon produces six tracks, ‘Tomorrow Never Comes’, ‘Liverpool Lou’ and Jackie’s own ‘You Have No Choice’ (with three other tracks produced by Leon Russell) for the LP ‘Genesis’ by Delaney And Bonnie’ (GNP Crescendo GNPS2054), a cash-in collection of early material by the duo

1972 – Jackie’s single “Vanilla O’Lay” c/w “Only Love Can Break Your Heart” (Neil Young song) from LP ‘Jackie’ (Atlantic SD7231) with ‘Paradise’ (John Prine), ‘Would You Like To Learn To Dance’ (Steve Goodman), ‘I Wanna Roo You’ (Van Morrison) plus original songs ‘Laid Back Days’, ‘Peaceful In My Soul’ and ‘Anna Karina’. ‘Melody Maker’ says ‘on this Memphis-recorded set, she proves again what a distinctive voice she has, and how she can really drive a song along. It’s the nervous intensity of her vocals that gives songs a special flavour’ 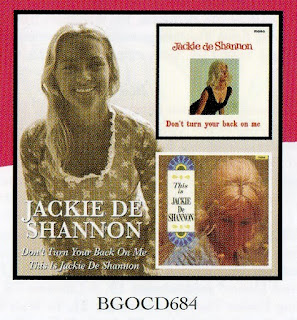 1977 – ‘You’re The Only Dancer’ Jackie DeShannon LP (Amherst Records AMH 1010) with her own songs ‘Don’t Let The Flame Burn Out’, ‘I Don’t Think I Can Wait’, ‘You’re The Only Dancer’ and ‘Tonight You’re Doin’ It Right’ plus ‘Just To Feel This Love From You’ and ‘Your Love Has Got A Hold On Me’ (both with Dean MacDougall). Musicians include Randy Edelman, to whom Jackie was married 3 June 1976

May 1981 – Kim Carnes hits a UK no.10 with Jackie’s “Bette Davis Eyes” (EMI America EA121), but is no.1 for nine weeks on US ‘Billboard’ chart. She’d allegedly hawked the song around for seven years before placing it with Kim Carnes

17 June 2010 – inducted into the ‘Songwriters Hall Of Fame’. She also broadcasts as entertainments correspondent for Sirius XM Satellite Radio on the Beatles and related topics 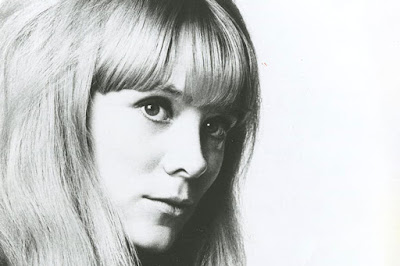