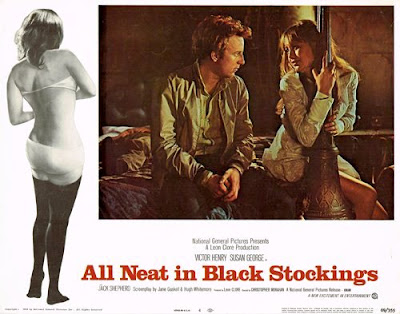 She’s ‘usually typed as sexpot’ snipes sniffy film critic Leslie Halliwell, about Susan Melody George. But she was only twelve-years-old when she made her TV debut, as ‘Kitty Walker’ in the BBC series adapted from Arthur Ransome’s ‘Swallows And Amazons’ (1962). It was later, with her long blonde hair and sub-Bardot pout that she became the go-to dolly-bird with Boris Karloff in ‘The Sorcerers’ (1967), with Denholm Elliott in TV’s ‘Dracula’ (1968), and supporting Suzy Kendall in ‘Up The Junction’ (1968). ‘All Neat In Black Stockings’ is a very minor entry in the Swinging Sixties movie-genre that does her no great favours, but by the same token it’s a light amusing romp with shots at many of the tropes that distinguish the sub-genre. Based on a sex-comedy novel by fantasy writer Jane Gaskell, better known for her ‘Atlan’ (1965) saga set in prehistoric South America and mythical Atlantis, it spreads its passing glance from kitchen-sink drama to lowbrow psychedelic art-house romp. So there’s predictable wackiness to come. When Ginger’s aerosol runs out of shaving foam, he improvises by using a froth of toothpaste. Lying in bed, he pours salt into his navel, the better to season the boiled egg he dips into it, before eating. And he orders his pub ‘black and tan’ shaken, not stirred. A Bond-reference that at least had the excuse of being reasonably current in 1968!

Window-cleaner Ginger (Victor Henry) is amoral. But the supposedly permissive times were meant to be amoral. Girls are ‘it’, or ‘something’ to be shared with his best scruff-mate Dwyer. ‘Allow me to introduce myself, my name is Jack the Ripper’ he sweet-talks a promising new bird, but once in bed she proves tediously over-talkative. So he sneakily pours cola beneath the sheets to discomfort her, until she gets up and leaves in a strop. But haven’t we been here before? Sure we have, in Michael Winner’s ‘The System’ (1964), where opportunistic ne’er-do-well teen-louts ‘grockle’ holidaying crumpet, then pass them round on a rota basis. And, of course, there’s Michael Caine’s chauvinistic womaniser ‘Alfie’ (1966) too.

The strap-line calls this film ‘A Provocative Modern Story Of Loving And Living’, in which ‘he falls in love, and lived to regret it,’ while ‘she learned about love, but left it too late.’ And maybe it tries to be all that. But if the title hints at a mild kinkiness, the prurient moviegoer would be disappointed, and largely un-titillated. The black stockings in question – Susan George’s (Jill’s), are first encountered by Ginger as he crawls across the pub floor to emerge from beneath the table where she’s sitting. But this early take on the more ribald ‘Confessions Of A Window Cleaner’ hinges on the central wheeze of his temporarily gaining access to a lavish palace of a house.

In the opening sequence he’s distracted from cleaning hospital windows by an attractive nurse, but before the Ward Sister has ‘this young thug’ escorted out he meets up with one of the patients, Old Gunge (Terence De Marney). This unkempt eccentric is concerned about how his menagerie of pets will survive while he’s hospitalised with gallstones. Naturally, heart-of-gold Ginger offers to help. He’s sharing a rundown rooming-house with Dwyer, so once he enters Gunge’s house – through a concealed entrance between giant billboard hoardings, he realises its potential. And moves in. By now he’s taken a more serious fancy to mini-skirted Jill, trading in his van for a £149 white MG sports car to impress her, with the house as the ideal back-up crash-pad. Unfortunately his dissolute brother-in-law Issur (Harry Towb) – who sleeps on the floor in a rolled-up carpet, decides to move his family in too, not only pregnant sister Cicely (Anna Cropper) but also his bit-on-the-side Jocasta (Nita Lorraine)! 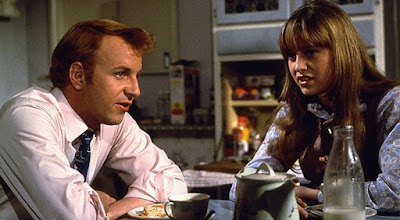 There’s a Supremes poster on Ginger’s wall, even though the soundtrack consists of swinging caper-jazz, cool sax (provided by luminaries Tony Coe and Kenny Wheeler) and snazzy drums. Filmed in and around Wandsworth, the film’s grittiness-content probably comes down to Ginger’s diatribe about global overpopulation, that ‘abortion is man’s answer to the desecration of the world.’ While, like girl-getter Oliver ‘Tinker’ Reed in the effortlessly-superior ‘The System’, Ginger’s sexual double-standards kick in when the hunter gets captured by the prey. As Tinker falls for posh totty Nichola, so Jill becomes the exception to ‘an obvious plonker like’ Ginger. She’s special, he doesn’t want to take advantage, so she stays ‘untouched by human hand’, despite the unsubtle urging of the pub-name ‘The Ram Inn’. Until the situation goes into meltdown when Issur throws a wild party that near-wrecks the house. Ginger throws out the revellers by wielding a medieval halbert, while Jill is conforming to their supposed free-love ethos by having it off with Dwyer. ‘She’s a fair piece and no mistake about it’ he comments approvingly. And when she falls pregnant it’s Dwyer – ‘share and share about, that’s our motto’, who’s responsible. ‘We’d best get married, I suppose’ concedes Ginger bitterly, ‘that’s the usual procedure.’

Despite some amusing distractions, including Dwyer pulling scams to raise funds for a projected jaunt to Jersey – expanded in some bonus ‘deleted scenes’, the film spirals into a downbeat note. They honeymoon in a Herne Bay B&B. She goes into labour during an embarrassing lecture from a trendy vicar. He wants to get their own apartment, she prefers they move in with her widowed Mum. After picking a fight in a pub he lurches home drunk – as in ‘A Kind Of Loving’ (1962), but actually winds up romancing himself into disapproving Mum’s favour. And they fall into a kind of begrudging domesticity. Finally, back on his window-cleaning round he calls off at a café where he flicks a mental gear and starts flirting with the waitress, who is all neat in black stockings. He’s regained his mojo, at the price, we suspect, of his precarious marriage!

Victor Henry also shares a role with Susan George in ‘The Sorcerers’, and while he was a TV bit-part regular, he can also be seen with Manfred Mann vocalist Paul Jones in his shot for movie celebrity ‘Privilege’ (1967). But tragically, whatever acting promise he showed was never to be realized. The pedestrian victim of a random auto-accident he died after being in a vegetative comatose state for seventeen years, in November 1985. While, a decorative sexpot addition to any screen part, and never less than adequate, probably Susan George’s most high-profile role was as Amy Sumners, Dustin Hoffman’s doubly-raped wife in the disturbing psychological thriller ‘Straw Dogs’ (1971), then the counter-culture road movie ‘Dirty Mary, Crazy Larry’ (1974) with Peter Fonda.

While at best ‘All Neat In Black Stockings’ is a vaguely atmospheric period piece from a decade of British cinema that still attracts nostalgic attention. 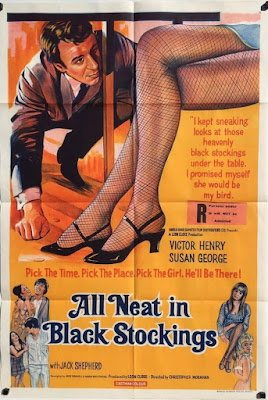 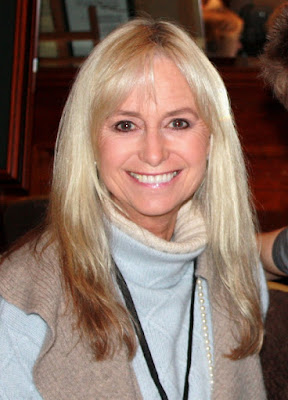 Posted by Andrew Darlington at 17:39