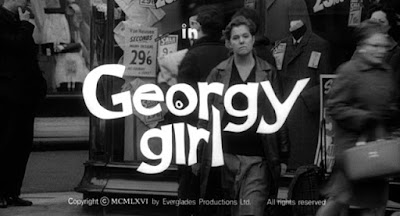 Tempted by the luring mannequin images in the salon window, Georgy goes into the hair-dressers and emerges with an elaborate beehive hair-style, but promptly disappears into a subway ‘Ladies’ where she rinses all traces of it away. Later, she finds herself stranded on a crossing-island by hurtling traffic, until two attractive girls appear and the cars immediately stop to let them pass. On the threshold of the Swinging Sixties, twenty-two-year-old Georgy-Porgy is the frumpy dowdy girl, self-conscious of her own figure and unsure of her own attraction. ‘The absolute story of my life’ she protests, ‘no matter what I try, god’s always got a custard pie up his sleeve.’ If it’s a fable of mistrusting superficial impressions over the true value of inner worth, it’s one that’s missed by her father, who chides ‘You walk about looking like a bloody tramp.’ 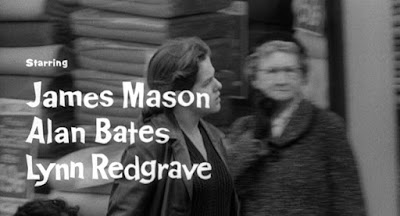 ‘Georgy Girl’ is filmed in moody and sharply atmospheric black-and-white, caught exactly between the old Kitchen Sink dramas and the new more playful youth spirit. ‘Have you got any aspirins, or dope or anything?’ enquires Alan Bates. He’d already appeared in the bleakly Northern ‘A Kind Of Loving’ (1962), now he wears a Mod-style cap and cavorts solo in a children’s playground, stopped only by the accusing stares of some watching kids. He breezes into Georgy’s flat singing ‘you’ll look a little lovelier each day’ from the Camay Soap TV-ad, with bantering dialogue. ‘Are you naked underneath that coat?’ he asks. ‘Stark!’ she answers flirtily. ‘Let’s have a look then’ he asks. ‘Three pence’ she counters. He shies away ‘too dear, Dear.’ 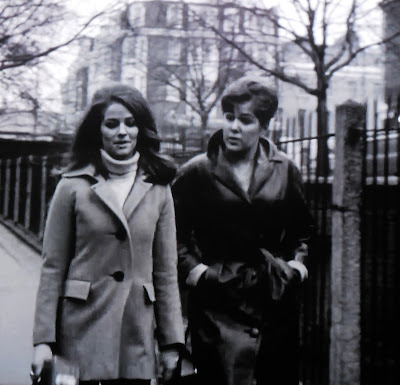 The film’s central ménage orbits a dressed-down Lynn Redgrave, who is a graduate of the Redgrave theatrical-dynasty. She had been ‘Susan’ in ‘Tom Jones’ (1963) and done a BBC-TV ‘Comedy Playhouse’ with George Cole (21 June 1966), but it was her role as Georgina ‘Georgy’ Parkin that brings her to critical attention. ‘It celebrates the kookiness of Lynn Redgrave, child of the working class but reared in the rich household of her parents’ employer’ according to critic Alexander Walker. She runs a playgroup where children do expressive-dance to music from an open-top reel-to-reel tape recorder, and she tries to learn conversational Italian from a 45rpm record. Charlotte Rampling is cast as her swish friend Meredith who plays violin with an orchestra. First glimpsed preening before the mirror in her underwear, she’s as contrastingly chilly and stylishly cool as Georgy is plain and warm. Yet she’s a hedonistic friend who thoughtlessly sidelines Georgy in order to go out partying. A future icon of arthouse movies, Charlotte is perfectly cast in her first major role, following modelling assignments and a Cadbury’s TV-ad. Although she can be fleetingly glimpsed as an uncredited dolly-bird in the Beatles ‘A Hard Days Night’ (1964). 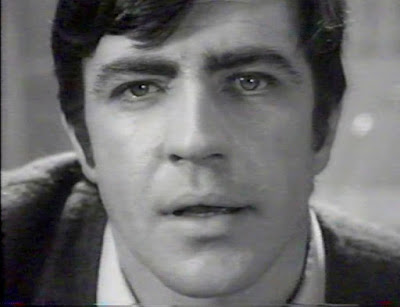 Likeable but feckless Jos Jones (Alan Bates), who works at a bank, is supposedly Meredith’s boyfriend, but as she dances out to meet another guy in a sports car, he’s left to entertain Georgy until she returns. She furtively watches him as he takes a bath while smoking a cigar, although he knowingly angles the door open to enable her a better view. They play-act an audition role in a typically kooky period way. But when Meredith returns and they start cavorting on the sofa, then on the floor all over a scrabble-board, Georgy first looks away… then is drawn to watch in wistful envy. 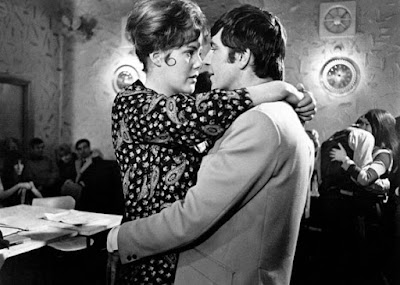 The back-up line is supplied by her parents – mother, and father Ted Parkin, played by Bill Owen showing the fine comic talent he’d bring to ‘Last Of The Summer Wine’. ‘What a way in which to speak’ he attempts to talk ‘posh’. Then ‘that’s the height of chick’ he says about a dress – meaning ‘chic’. They are live-in employees of wealthy forty-nine-year-old married James Leamington (a suitably creepy veteran James Mason), the self-made tycoon with obligatory north-country accent who has become Georgy’s proxy father and prospective Sugar Daddy. He’s drawn up the draught-copy of a legal contract effectively making Georgy his mistress. She sidesteps and refuses to answer. He kisses her awkwardly. At first she responds with increasing passion, before pushing him away, ‘you’re old enough to be my… managing director!’ The two men commiserate with each other. ‘If I were you, Ted, I’d take her over my knee, pull down her knickers and give her a bloody good tanning.’ Ted simply nods in resigned agreement.

The balance tips when a bored Meredith has rough-play sex with Jos in her basement flat, then teases him about being pregnant – again! The unplanned pregnancy and abortion are a staple of such movies – termination being still illegal until 1967, adding a touch of contemporary gritty realism. ‘I don’t care if it’s old hat’ Georgy protests, ‘I know it’s just a middle-class taboo and the law needs changing.’ On a seeming whim, despite resenting her condition, Meredith agrees to marry Jos. ‘You can be best man’ she tells Georgy. In contrast to an exuberant black wedding at the registry office before them, there are just the three of them, Georgy throws a single handful of confetti before it starts to rain, as if an omen of what is to come. The mismatched trio – soon to be four, share the flat, while Mason foots the bill for an expensive splurge of baby ‘things’. Meredith is still in denial over the impending child, as Jos and Georgy watch a TV birth-programme, read ‘Baby And Child Care’ and sit together more like the old married couple ‘by the light of a silvery telly’. ‘Isn’t it marvellous without her?’ he chortles. Until, in the middle of a violent argument – ‘You’re a bitch’ he says, ‘you’re a bastard’ says Meredith, he almost-accidentally kisses Georgy. ‘Thunderous chords on the piano’ mocks a jaded Meredith, ‘scream of train going into tunnel. Don’t pass out, dear.’ He’s realised that he loves Georgy – not Meredith, and he pursues her out into the street, chases her onto a Routemaster bus, and threatens to strip right there on the street until she accept him, with all the wacky irreverence of Swinging movies to come. Back in the flat they have sex. ‘We’ll live happily ever after’ he tells her. We suspect that this might not necessarily be true, as he flirts with the Maternity Ward nurses. 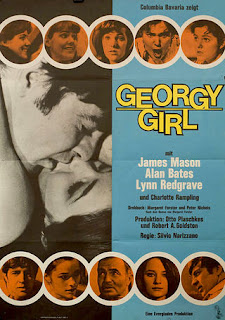 Sara is born – without an ‘h’, ‘Society For The Advancement Of Risky Anecdotes’ he jokily capitalises. The ward is filled with happy smiling family units, as Meredith files her nails. Jos takes a chocolate from the box he’s brought her, and he eats it himself. She hates the baby – ‘it’s hideous’, she intends to get it adopted. Until Georgy intervenes. ‘You have a free, gratis and for-nothing instant family’ Meredith tells Georgy, before going off with a new man. Jos reads ‘Woman’s Own’. James Mason watches them from his Jaguar. 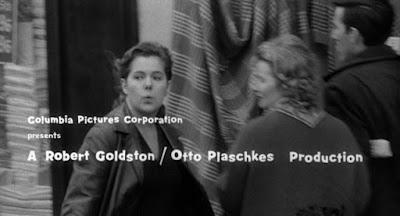 As is the nature of these tales, James Mason is ‘overcome with grief and shock’ when his wife conveniently dies, Ellen Leamington (played by Rachel Kempson, Lynn’s real-life Mother!). ‘She was a beautiful woman, beautiful’ he confides to Ted, ‘tolerant, civilised, and about as exciting as a half-brick!’ While Georgy loves motherhood, Jos chafes at the enforced domesticity and lack of intimacy. She tries to explain their unorthodox live-in arrangements to the Health Officer. No, they’re not married. Well yes – he’s married, but not to her. And no, the child is not theirs. 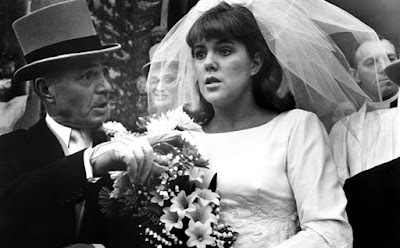 The film uses evocative locations around the W2 Little Venice canal-side area, including Maida Avenue. To critic Alexander Walker ‘there was a great deal of physical running around town à la Godard, dancing in the rain like the bemused people in the telly commercials’ but it ‘did not even pretend to the recognizable social reality’ (in ‘Hollywood, England’, Harrap, 1974). There’s a touching final sequence where Jos and Georgy take a Thames boat-trip against the iconic Big Ben London skyline. Jos dances on the jetty as the boat draws away with her on it. Then he’s gone from her life. James offers to amend the terms of his contract. And she marries him. Two weddings, and a funeral. 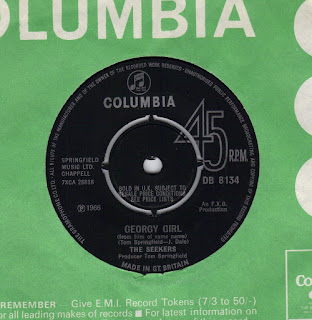 There’s jazzy harpsichord on the soundtrack. Georgy’s piano ‘William Tell’ accompanies Ted’s rapid-run down the stairs as in a madcap silent movie comedy. And the Seekers are perfectly cast to incarnate the title-song, a frumpy awkward group, decided outsiders to the trendy Pop scene. After the demise of the Springfields – with Dusty quitting for her solo career, the Seekers were adopted by Tom Springfield who supplied a series of blandly catchy hits for the neat and cleanly turned-out Australian foursome, fronted by Judith Durham. For the film-song he collaborates with ‘Carry On’ star and one-time Pop Singer Jim Dale, with a different set of lyrics used on the soundtrack to the hit single. And just as Lulu topped the American chart propelled by the success of the ‘To Sir With Love’ (1967) movie, the huge popularity of the film served to provide the Seekers with their only major American hit. The only remaining question, to me, is why Paul Simon – who rarely collaborates with anyone on his compositions, chose to write at least three songs with Seeker Bruce Woodley, including the Cyrkle hits “Red Rubber Ball” and “Wish You Could Be Here” as well as “Cloudy”. While the seventh of the Seekers nine chart hits, “Georgy Girl” peaks at no.3, 23 March 1967 as the Beatles “Penny Lane” c/w “Strawberry Fields Forever” drops from no.2 to no.5, just as the Summer Of Love is about to open its techni-colourama kaleidoscope. 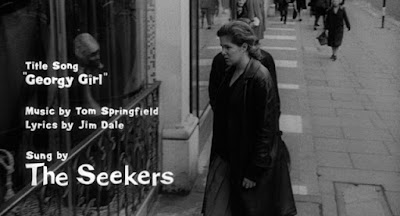 The song-lyric advise her to ‘shed those dowdy feathers and fly.’ Yet if ‘Georgy Girl’ is deemed an Ugly Duckling story, it fails to deliver on the fairy-tale swan coming-out dénouement. That blossoming never happens. This is not a Feminist fable. She finds fulfillment in motherhood, albeit with another woman’s child. She marries out of convenience rather than love to a man old enough to be her father. It’s a downbeat compromise, or a bleak acceptance rather than a happy ending. It’s that kind of movie. 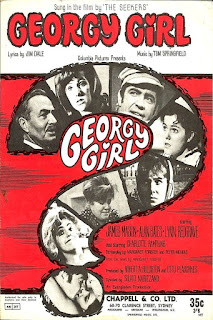 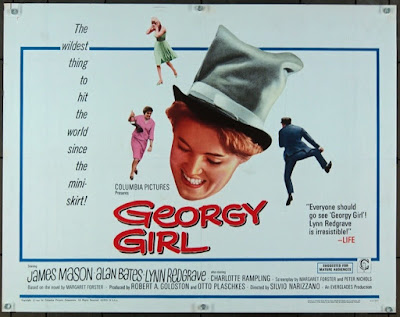 Posted by Andrew Darlington at 19:48