Book: 'BEHIND THE SONG: THE STORIES OF 100 GREAT POP AND ROCK CLASSICS' 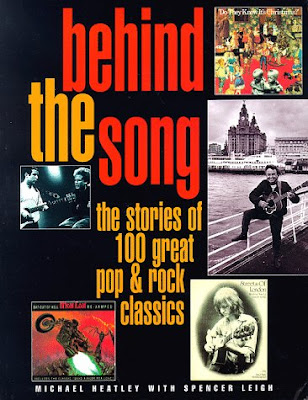 ‘LOOK WHAT THEY’VE
DONE TO MY SONG, MA!’

It’s bound to be subjective. You got your ‘classic’. I got mine. “Jailhouse Rock”. “Sweet Little Sixteen”. “Common People”. “Smells Like Teen Spirit”. Yes. Yes. Yes – and yes. But “Do They Know It’s Christmas”? Wet Wet bloody-Wet’s “Love Is All Around”? Simple Minds! And Bryan for-CRIZEACHE Adams!! But no Hendrix!!! Do me a favour. This is a large-format profusely illustrated volume, which means you get commentary a smidgen longer than this review for each song, in blocks of text surrounded by lots of tasteful white space, and some splash photos. You turn to – say, “Mr Tambourine Man”, to discover that ‘Bob Dylan was regarded as the King of the Protest Singers’. Then – say, “God Save The Queen”, to the revelation that Malcolm McLaren was not only ‘the Sex Pistols manager and provocateur’ but that ‘he knew the value of publicity’. And ‘to call Britain ‘a fascist regime’ means that Johnny Rotten hadn’t a clue what he was writing about’. It seems Mr Heatley is not exactly attuned to Punk-Rock anarchy. He’s more at home with the sanitised mainstream post-New Wave Pop of Sting, who gets two entries, alongside Presley, Lennon and Paul Simon. While, to me, Mr Lydon’s playfully confrontational metaphor about the symbolic apex of Britain’s corrupt and shamefully elitist Class system seems... pretty apt.

On firmer ground, the oldest song analysed here is John Lee Hooker’s “Crawlin’ Kingsnake” from 1949. Before the inauguration of Rock ‘n’ Roll. But with all the hard Blues ingredients there, already intact. The most recent is “Under The Bridge” – albeit through the stark Red Hot Chilli Peppers heroin-fuelled original rather than the smoothly Dance-remixed cleavage and pierced belly-button All Saints no.1. While I already know the story about Paul Simon writing “Homeward Bound” on the platform of Widnes Rail Station, or thereabouts. And that ‘Terry and Julie’ in the Kinks’ “Waterloo Sunset” are widely assumed to be Terence Stamp and Julie Christie. Perhaps I’m being harsh. I’m too Rock-literate for my own good. This book is intended for the more general reader. And I guess they’ll love thumbing through it in Waterstones to see what Michael Heatley and Spencer Leigh have to say about their (strictly subjective) faves. Before shoving it back on the shelf.

Posted by Andrew Darlington at 17:36