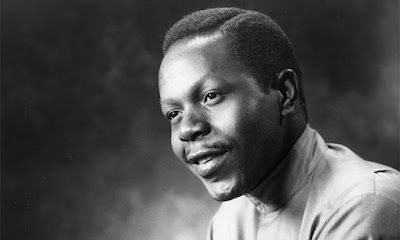 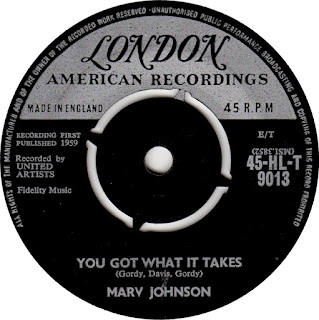 Marv Johnson had got what it takes to satisfy…

He was a bridge leading from authentic early Rock to sweet Soul, the raucous giving way to the smooth. An active ingredient in the evolution of Motown, he died of a stroke following yet another concert, in Columbia, South Carolina, on the sixteenth of May 1993.

His “You Got What It Takes” with fat honking horn and ‘yeh-yeh-yeh’ backing voices, is a ‘personality’ record with a wicked sense of humour – ‘you don’t drive a big fast car, you don’t look like a Movie Star, and on your money we won’t get far.’ Johnson’s abrasive Rock vocals are dirty with energy and sly suggestion, its raunchy R&B assault is sweetened by an infectious Pop sheen, a jive danceability and the ‘you send me’ teen-code. Some say the ‘nature didn’t give you such a beautiful face’ line is insulting. I don’t see it that way. There’s a kind of reality behind the humour. All women aren’t beautiful, it’s a fact. But they’re all equally worthy of love. That’s surely a sentiment worth celebrating? It hit the US no.10 in March 1960, and – issued on the distinctive black-and-silver London American label, despite strong opposition from a powerful Johnny Kidd And The Pirates cover version, Marv’s original soared to a UK no.5 beneath hits by Cliff Richard, Adam Faith and Anthony Newley. To me, at the time, it was just wonderfully catchy Rock ‘n’ Roll, in the way that Lloyd Price, Jimmy Jones or Jackie Wilson were Rock ‘n’ Roll. I knew nothing about how, with this 45rpm single, Motown was on its way! (Flip the record over, ‘B’-side “Don’t Leave Me” carries Smokey Robinson, Berry Gordy and Brian Holland writer-credits). 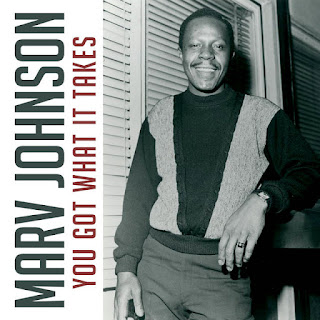 With “You Got What It Takes” Marv Johnson had created at least one minor classic. The song would return with a vengeance in 1967 for the Dave Clark Five, and yet again for Showaddywaddy who take it to no.2 in July 1977. But there were a number of impressive also-rans…

Born in Detroit at a time when the American economy worked for god and General Motors, Marvin Earl Johnson began singing aged just thirteen when he formed and sang as part of the Gospel Doo-Wop Serenaders. After being spotted performing on a flatbed truck during the Detroit Carnival Parade, he went solo and soon achieved an American no.6 with “Come To Me” in April 1959, falsetto-highs and girls chanting ‘yeh-yeh-comma-comma-comma’ in a back-up groove that’s recognisably in a “Handy Man” style. Marv had a fine Soul voice, sharp good looks, and was an efficient piano-player, but the secret ingredient in the subsequent run of hits was frequently provided by Berry Gordy Jrn. Working part-time and afterhours Gordy was experimenting, defining and refining what was to become the world-conquering Motown ‘Sound Of Young America’ by writing and producing for Jackie Wilson and Etta James, as well as Marv Johnson – then leasing the resulting Tamla masters to United Artists, drawing raw R&B towards the crossover market with Pop-friendly hooks run over sharp handclap rhythms. 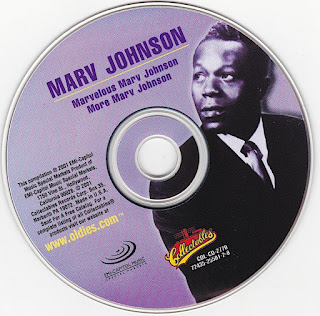 More Marv-elous hits followed, the piano-led “I Love The Way You Love” was no.9 USA and no.35 UK, while both the Sam Cooke swing of “(You’ve Got To) Move Two Mountains” and “Ain’t Gonna Be That Way” – with the Rayber Voices, charted as 1960 closed. Recorded at what would be the Hitsville USA studio, with Funk Brothers’ James Jamerson’s bass, these tracks form a valuable trove of vinyl history, written either by Berry Gordy, or by Marv himself in partnership with Gordy, creating a crisp and frothy R&B sound, as backing girl-vocals coo reedy ‘bop-shoo-bops’ and the Mr Bassman’s Bom-Bom-Bom delineates the jukebox bottom line. But with the acceleration of his own Motown label Gordy concentrated on the more crafted successes of the Miracles and Mary Wells, while Johnson declined into a lengthy eight-year hitless period, relegated to the Rock Revival Package tours. Touring Australia with great success. He continued to record for UA working on material written by – among others, Bert Berns who also penned “Here Comes The Night”, and who later relaunched Van Morrison into his solo career through his Bang label. 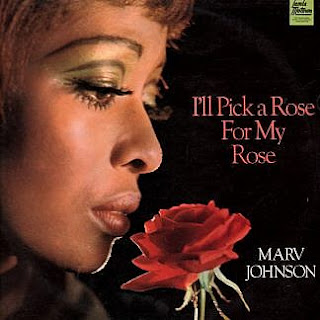 But it was to be a reconnection with Gordy that reignited Marv Johnson’s chart run. By August 1965 he’d issued a fine and now-collectible “Why Do You Want To Let Me Go” c/w “I’m Not A Plaything” on Tamla Motown proper (TMG 525). He eventually returned to the UK Top Ten with “I’ll Pick A Rose For My Rose”. Although it failed in the US, the single was picked up by Northern Soul DJs for allnighters, which led to airplay, prompting re-promotion and boosting sales. Not quite prime Motown Chartbuster material, it’s a sweet and plaintive story-song with a gotcha sing-along hook, which remained a staple of MOR radio programming. It was followed into the Top Thirty nine months later by “I Miss You Baby (How I Miss You)” (no.25 in October 1969), Marv’s final American R&B hit.

He remained on the Motown staff, writing songs for Johnnie Taylor, the Dells and Tyrone Davis, while holding down a nine-to-five in the sales and promotion division. He also recorded new sides slanted at the Northern Soul market through subsequent hook-ups. An album of material drawn from this later period, yet named after his first chart hit ‘Come To Me’, including Stevie Wonder’s “I Was Made To Love Her”, as well as “It’s Magic Between Us”, and “Look, It’s Raining Sunshine” was issued by DJ Ian Levine’s Motorcity Records (CD distributed by Charly MOTCLP 37), and it shows that, at moments, Marv Johnson has still got what it takes to satisfy… Posted by Andrew Darlington at 19:36