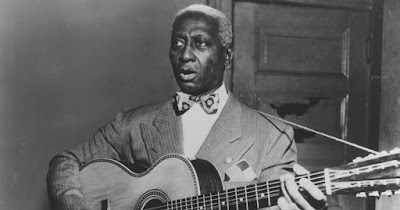 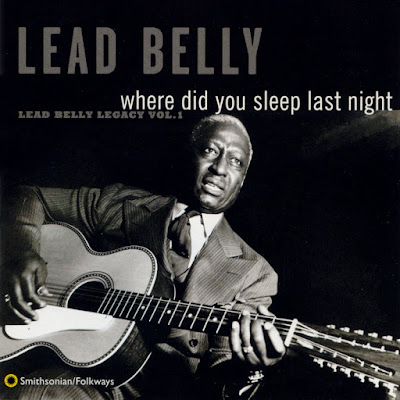 Remember that bit on MTV Unplugged where Curt Cobain plays “Where Did You Sleep Last Night” and calls its originator ‘my favourite performer… our favourite performer’? Various versions of the same song had already turned up elsewhere as “In The Pines”, or “Black Girl” – it goes way back, but it began with Huddie William Ledbetter, known as ‘Leadbelly’, or sometimes ‘Lead Belly’. A 1976 bio-movie claims ‘they chased him down with dogs, chained him in iron, beat him with rawhide, slammed him in the sweatbox, they tried to bury Leadbelly, but Leadbelly wouldn’t lie down’ (Roger E Mosley played Huddie). Which pretty much shorthands his life.

A Louisiana-born Texan he grew up in shit-storms of brutalising poverty, an itinerant brawler and trouble-man, a field-worker who claims he picked 1,000 pounds of cotton a day, a steel-driving railroad track-liner, a hot-tempered hard-drinking rambler, he fused authentic chain-gang grunts and plantation-hollers into slave-era primordial folk-blues of unearthly power. Brilliantly bawdy and dangerously disreputable, fuelled on booze and wickedness, his abrasive voice still stands big and ballsy in all its raw unproduced power. And Nirvana came a long way down the covers history. Lonnie Donegan unleashed the Skiffle craze with his “Rock Island Line” then followed it later with “Pick A Bale Of Cotton”, the Animals got “House Of The Rising Sun” from an earlier Bob Dylan version of Huddie’s song, while names as diverse as Harry Belafonte (“Sylvie”), the Beach Boys (“Cotton Fields”), Van Morrison and the Grateful Dead all benefit from his repertoire. 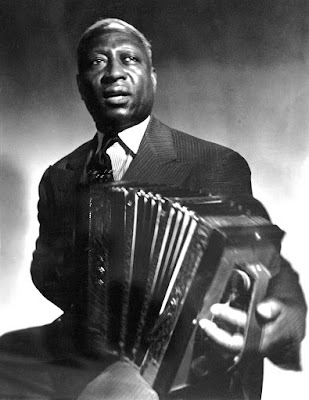 Huddie was adept at rearranging folk melodies, and others have done the same to his archive – Led Zeppelin took their “Gallows Pole” from his “Gallis Pole” and the Rolling Stones reconfigure his “The Bourgeois Blues” into “When The Whip Comes Down”. Call that continuity, call it theft, but Leadbelly survives. This three-CD box-set preserves no less than seventy-five vintage tracks, and that so many of them are familiar – if only through other hands, only enforces the power of his legacy. His vocal mannerisms and humorous asides were meticulously mimicked by tyro folkie Robert Zimmerman from these same cuts. They are punctuated by intriguing fragments of studio dialogue and the kind of bragging autobiographical talk-in he used when playing live, which provide startlingly tactile windows into lost time.

He learned his craft scuffing with ‘my friend’ Blind Lemon Jefferson, adopting bass figurations from barrelhouse boogie-woogie, his low tunings combining with heavy strings to produce his percussive playing-style, adding knife-slide techniques, playing straight and honest on his big Stella twelve-string guitar, while cunningly avoiding chord-shapes he found too difficult. He spent time in ‘Sugarland’ penitentiary for the homicide of a family member in a brawl in 1918, and wrote “Midnight Special” as his ticket out. He absconded to live on the run, only to get hauled back to Angola State for a third jail-spell in 1930 where he was ‘discovered’ by folklorists John and Alan Lomax who taped him for twelve albums-worth of ‘Library Of Congress’ recordings. They petitioned for his release, and he recorded “Goodnight, Irene” around this time. Taken up in New York by the Lomax’s during the 1940s – as chauffeur as well as performer, he began hanging with leftie folkies Woody Guthrie, Josh White, Sonny Terry & Brownie McGhee, and a young Pete Seeger. Leadbelly died 6 December 1949 following a pioneering European tour, he was aged – probably 61, his life details remain unclear. He never made much money while he lived, spending hand-to-mouth what he had, but six months after he died Pete Seeger’s Weavers sold two-million copies of “Goodnight, Irene”. 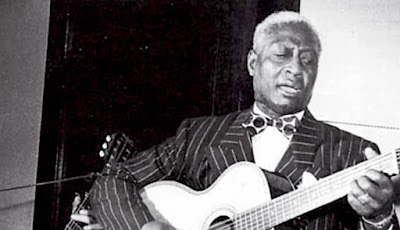 Posted by Andrew Darlington at 18:57

More than 160k women and men are hacking their diet with a simple and SECRET "liquid hack" to burn 1-2lbs each night while they sleep.

It is scientific and it works with anybody.

You can do it yourself by following these easy steps:

1) Take a glass and fill it half the way

2) Proceed to use this weight losing HACK