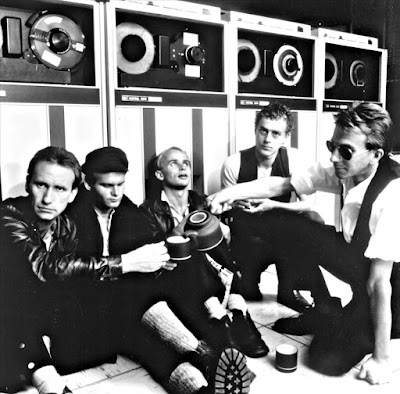 MEN AT WORK:
THE MEN FROM
DOWN UNDER

I interviewed Men At Work when the Australian band
visited the UK for press and promotion, shortly before
“Down Under” topped the global charts… 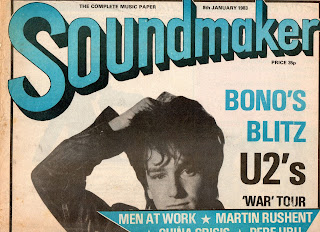 Geographically speaking – according to the album ‘Business As Usual’, Australia is positioned somewhere around the mid-Atlantic. A cultural bridge between the slick US ‘New Wave’ of Cars, and the better moments from Police. That’s roughly the area within which Men At Work work. ‘We present a new sound without being too confronting about it,’ explains blonde crop-head saxist Greg Ham. ‘Americans can listen to it and it’s still got the elements they like in the music they’ve been listening to, melody and hooks, but it’s a slightly different sound. They consider us a New Wave band out there, which is something I would never label us. I don’t even know what it means any more. But they listen to it, they like it, and they can also pat themselves mentally on the back because it means they’re into ‘New Music’.’

So is Men At Work some kind of musical import-export scam? An astute exercise in taking the more radically indigestible lumps of UK innovation and marketing them in more homogenous forms for US mega-platinum consumption? If so, then it’s a technique they extend into their promotional strategy. ‘The American idea of a promo video for a song is to film the band playing that song – and that’s it. They just stand there and play it. Whereas we try to tell a story and make it a bit amusing as well, and they really respond to that. We’ve been able to make three film-clips from this first album that’ve been in no small way instrumental in breaking us. In the States video is a new thing for bands. They have a twenty-four music channel (MTV), and we found that the areas where this TV was strongest were the areas where we were selling records – even though we might not be getting the airplay. Because people were seeing the video and liking it.’ 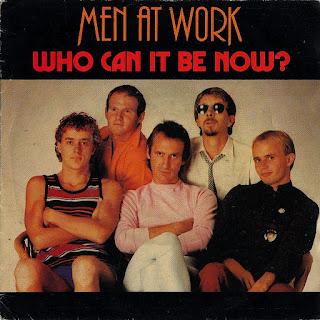 Whatever its derivation, the technique works spectacularly. They arrived in the States with a single in the low forties. They opened a tour for Fleetwood Mac, they played hard, and when they quit the land of opportunity, heading for European shores, they left a no.1 single and a month-long stake-out of the album top slot too. You’ve probably seen the video of their “Who Can It Be Now?”, the album opener. There’s ‘golden boy’ vocalist Colin Hay sat in a swivel chair in a sparsely furnished darkened room, awaiting the midnight knock. ‘Is it the men come to take me away?, why do they follow me?/ it’s not the future that I can see, it’s just my fantasy,’ his high voice zigzagging like waveform patterns against the thick rich sax lines. The paranoid edge is marking it out from most of the US blandwagon, and bringing it closer to the UK conception of what intelligent Pop-Rock should be. ‘There’s nothing wrong with my state of mental health,’ Hay delivers straight into the camera, unnervingly normal in appearance in all but that nerve-shredding stare.

What price John Cougar Mellencamp by comparison? Do they really expect us to find the image of ‘two American kids/ doing the best that they can’ in any way vaguely interesting? Faced with such insipid opposition it’s hardly surprising that Men At Work are America’s most out-of-left-field 1982 success story.

There are five Men At Work here for promotional work, for press, and for a one-shot ‘showcase’ date at ‘The Venue’ where they were bestowed a rather suspect eulogy from arch-opportunist Jonathan King. Histories unravel. Vocalist Colin Hay was born in Glasgow before emigrating, meeting guitarist Ron Strykert in Melbourne, and thus laying the band roots. Bassist John Rees and drummer Jerry Speiser swelled the personnel. I’m talking to Greg Ham who feeds the ice-fire Roland Kirk flute riffing into their big Oz hit “Down Under”. He is articulate and pleasant with just faint traces of accent. Dressed casually, decidedly un-flash, in new upwardly-mobile business-chic, he slips in words like ‘product’ and ‘market penetration’ with some frequency. He’s obviously well-used to this interview schtick and his party-line flows easy and fluent except at those points where I de-rail him with a question. He strikes out momentarily, off-balance, before realigning on some new conversational tack.

He’s talking now about the problems of breaking into – then breaking out beyond the Australian music ghetto. ‘We’ve been together three-and-a-half years now, and it’s… I don’t know that it was difficult, it wasn’t… it took us a while, we worked hard at it.’ Then he hits stride and inks in details of hard-slog around the greasy dead-end clubs of Sydney, Perth and Melbourne, building style, and developing resilience. Then the signing to CBS in early 1981. 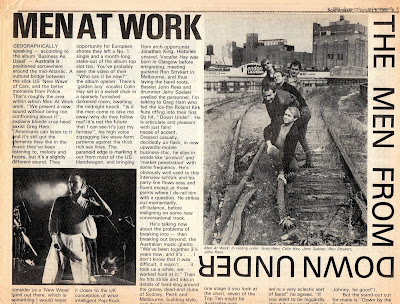 ‘The best thing that’s happening in Australia at the moment is that people are very positive about their own music. It’s a little bit of nationalism. It’s turned around from a few years back when people weren’t particularly proud to have an Australian record in their collection. But then, it doesn’t take very much to bring out that nationalism, as soon as people think it’s cool to have something of their own then they’ll go all the way. So there’s a very positive feeling behind Australian music in its home country now. There are so many Australian bands recording and playing – and the product they’re turning out is good enough – that at one stage, if you look at the chart, seven of the Top Ten might be Australian acts.’

‘There’s a lot of creative concepts going on, while simultaneously the ancillary services – the recording studios, management, publicity, the whole thing – has come up to the stage where it’s into a world standard. There was a time when, to release an album overseas you had to go over and re-record it because the quality wasn’t good enough. But now that’s well past.’

‘Business As Usual’ (November 1981) is a case in point. Despite my snide humour about cultural plunder, the sound they obtain at Melbourne’s AAV Studios (courtesy of American producer Peter McIan) is immaculate, the content-range impressively diverse. ‘Musically, I think we’re a very eclectic sort of band’ he agrees. ‘If you want to be niggardly about it you could call it a hodge-podge of styles. Or if you want to be positive you could say an amalgamation. But there are a lot of different styles, I think that’s one of the strengths of this album.’ 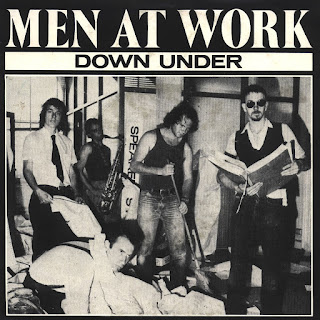 There’s the amusing “Down Under” itself, allegedly adopted as a new Australian national anthem, an Eighties answer to ‘Waltzing Matilda’ according to Colin Hay. ‘It’s really a series of crazy stories about Australians overseas’ – ‘on the hippie trail, with a headful of zombie.’ A sketch of Bombay (Mumbai), then one of Brussels – ‘the Australian trying to speak French to the guy in the shop, and turns out this guy also comes from Melbourne!’ The contrast between its jauntily infectious rhythms, and the crashing guitar chords and ‘Baba O’Reilly’ synths of “Be Good Johnny” – for which Ham scored the melody – is impressive. The title of that one is obviously a pun on a Chuck Berry thing, sure. But the subject-matter comes down to the ideas of the kid that never did anything at school, was never part of football or sport, would never get picked for teams because nobody wanted him (‘gonna play football this year, John? No/ you must be gonna play cricket this year then are you, John? Naw’). But all the time they were very creative people in their own right (‘so tell me, what kind of boy ARE you, John? I only like dreaming, all the day long, where no-one is screaming/ Be Good Johnny, be good’).

But the stand-out cut for many is “Down By The Sea”, a song about sexual initiation, ‘overdosed on pleasure.’ A slick juxtaposition of innocence and experience that is as clearly defined and as wide-open as Peter Weir’s Australian movie ‘Picnic At Hanging Rock’ (1975). A vision of the real contrasts in Australian society, and its most effective expression through the best of the new generation of Oz bands. Overall it’s a value-for-money album. Not one to change your life, no grand statements or pretentious epics, just good in the way that, say, ‘The Lexicon Of Love’ is good. Crammed full of artfully crafted songs, flawlessly performed, with intelligent lyrics and hooks that keep you hooked.

And if – so far, the UK has yet to succumb in massive numbers to the Men At Work schematic, then that seems more a cause for vague bemusement than serious concern on Ham’s part. He should worry about one obstinate territory in a world of contented consumers! ‘It’s a tricky one over here’ he admits. ‘The English scene is a law unto itself. I can’t really predict what’s going to happen here.’

Then he goes on to predict their return to these shores in early 1983 with a more concerted attempt at market penetration, including regional gigs. Men At Work have only begun… 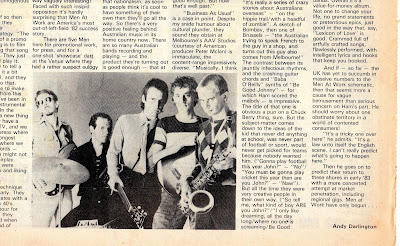 PS:
Following the publication of this interview the single “Down Under” topped the UK charts too, for three weeks from 29 January 1983, although follow-up “Overkill” stalled at no.21 the same April. In the States things were different, “Who Can It Be Now?” had already been no.1, as was “Down Under”. “Overkill” – from second album ‘Cargo’ (1983) reached a US no.3, with “It’s A Mistake” following it up no.6. A solid run of hits. There were line-up changes for the third album, ‘Two Hearts’ in 1985, eventually leaving Colin Hay as the sole remaining member. The band split at the close of 1985. There was litigation alleging that Greg Ham’s flute figure on “Down Under” was taken from a 1932 song called “Kookaburra”, resulting in the loss of 5% of their royalties, Greg died 19 April 2012. Colin Hay formed a new line-up in 1996, and continued to tour as Men At Work, while also working with Ringo Starr And His All-Starr Band.

Posted by Andrew Darlington at 10:03

Did you hear there's a 12 word sentence you can communicate to your crush... that will induce intense feelings of love and instinctual attractiveness for you buried inside his chest?

Because deep inside these 12 words is a "secret signal" that triggers a man's instinct to love, idolize and protect you with all his heart...

This instinct is so hardwired into a man's brain that it will make him try harder than ever before to love and admire you.

Matter of fact, fueling this influential instinct is absolutely essential to achieving the best ever relationship with your man that the second you send your man one of the "Secret Signals"...

...You will immediately find him expose his soul and mind for you in such a way he never expressed before and he'll distinguish you as the only woman in the universe who has ever truly appealed to him.