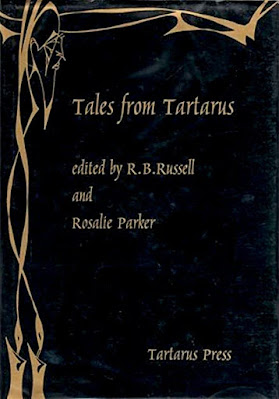 Book Review of:
‘TALES FROM TARTARUS’
edited by RB RUSSELL and ROSALIE PARKER
(Tartarus Press, October 1995, ISBN 1-872621-19-7, £14.95, 202pp) http://www.tartaruspress.com/index.html
Let us start as we mean to go on – monstrously.
As black and shiny as beetle-shell, this original anthology of new weirdness is an expressway to your skull. Sixteen tales of haunting nastiness gathered together around a common thematic nucleus provided by Tartarus, editor Ray Russell’s stylish independent press. Erstwhile specialists in beautiful limited edition texts from the more restrained Horror archives of Arthur Machen, the key here is probably Peter Vincent’s story “Completion”. It recreates Machen’s slightly formal prose style perfectly to uncoil the consequences of a bookish Machen-collector locating the rarest of all Machen artefacts, a poem called “Eleusinia” printed in 1881 with only two copies known to have survived. Vincent’s tale is wistfully reflective. About a solitary man of bibliophile obsessions. A literary pleasure, about literary pleasures.
Ramsey Campbell also develops the ‘enjoyably creepy’ atmosphere of low-key unease where darkness shifts on the landing and shapes move behind the mirror. His “Napier Court” is an internal dialogue of teasing hallucination, black delirium and strange compulsions which move inexorably towards an effectively disturbing climax. But it takes Simon Clark to effectively up-gear the Tartarus ethos and aim it straight at the centre of your brain. In his “Portrait Of A Girl In A Graveyard” he addresses the reader direct, YOU are the troubled adolescent with the Kurt Cobain poster on your wall, YOU swim through a mire of three-hundred-year-old coffins so tactile you feel their chill, YOU draw your own severed head from the deep buried black sack. Simon is less overtly concerned with literary antecedents, and more effective because of it. He switches the anthology’s centre firmly from the hung-over spectres of the bookish past to more fractured terrors of the now. And it’s a breathtakingly macabre sweep of magical realism.
From there, Rhys Hughes – author of a simultaneous Tartarus collection called ‘Worming The Harpy’, adds an allegorical medieval fantasy in Edgar Allan Poe’s ‘Masque Of Red Death’ tradition, located in ‘the dusk between ecstasy and terror.’ Clare Johnson is trapped in a surrealist painting, Dale Nelson deals dustbowl dust-demons with skewed biblical subtexts, and Jon Preece is on a supernatural voyage into the African Heart Of Darkness.
Horror SHOULD be more than mere slasher gore. If not morality there should at least be an ironic symmetry of cause and effect. Weird Fiction – Russell’s chosen term, ranges wide and is inhabited by many wondrous, strange and often terrifying beasts. It’s a place where owls, bats and other more nameless creatures circle and skitter, phantasms dance in darkness, monsters lurch and flinch beneath floorboards and poltergeist conspire mischief in their sad silent darkness.
This book starts in whispers, and culminates with monsters. A unique, and very strange journey. 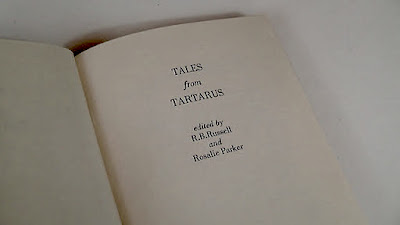 Full contents:
‘Introduction’ by RB Russell
‘The Forest Chapel Bell’ by Rhys Hughes
‘Saint 505’ by John Clark
‘Portrait Of A Girl In A Graveyard’ by Simon Clark
‘Powers Of The Air’ by Dale Nelson
‘As Gone As The Dead’ by Jon Preece
‘The Interview’ Colin Pink
‘Do Bats Eat Cats?’ by Alan Webster Lear
‘Kruptos’ by Mark Samuels
‘Forbidden Fruit’ by Elizabeth Brown
‘The Paper’ by William Charlton
‘The Reverend Douglas Delves’ by RB Russell
‘The Lurker In The Room With A View’ by Andrew Darlington
‘Talking Pictures’ by Clare Johnson
‘Napier Court’ by Ramsey Campbell
‘Completion’ by Peter Vincent
https://www.facebook.com/tartarus.press.5
http://www.tartaruspress.com/index.html 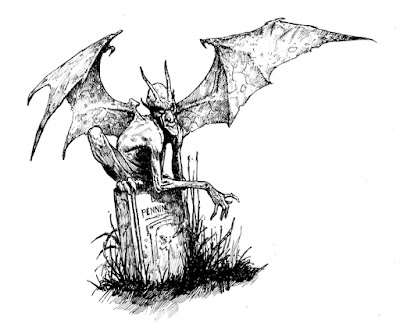