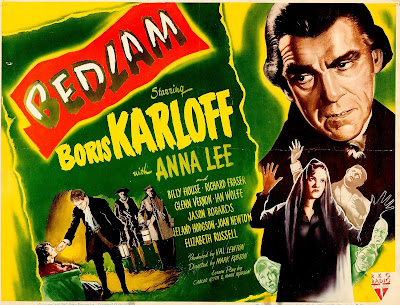 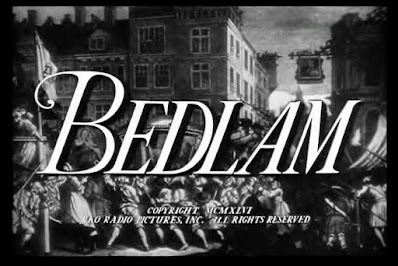 ‘Some are dogs, those I beat. Some are pigs,
those I let wallow in their own filth…’
– Boris Karloff as poet and
‘apothecary-general of Bethel’ Master Sims
This is a film ‘suggested’ by the eighth and final engraving in William Hogarth’s satirical ‘The Rake’s Progress’ series, and the agitational prints are used creatively from the credits on. This is also a Horror movie that critic Timothy Sullivan calls ‘a historical grand guignol set in a famous London asylum.’ With a malevolently brooding Boris Karloff as Master Sims, the ‘apothecary-general of Bethel’, the sadistic curator of St Mary’s of Bethlehem, who charges voyeuristic visitors ‘tuppence’ for the ‘merry notion’ of an afternoon’s entertainment laughing at the bizarre antics of the inmates. Dated precisely 1761, there’s madness afoot, but this is no House of Fun. ‘It does not look so merry a place’ says Nell disapprovingly.
If there’s a hero, it’s Nell Bowen (played by Anna Lee), a proud, spirited and fiercely independent woman who first appears as Lord Mortimer’s protégé – although she makes it clear, as a former traveling player, she’s not dependent on any man’s patronage. The overweight Mortimer (Billy House) delights in Sims’ staged presentations featuring the unfortunate bedlamites, ‘a masque of madness to set you howling’. At one such pageant a performer is mocked in the guise of ‘Queen of the Artichokes’ (Ellen Corby), another – painted gold to represent ‘Reason’, dies of asphyxiation in a truly creepy scene which glances forward to Shirley Eaton’s gilded fate as ‘Jill Masterson’ in ‘Goldfinger’ (1964). Nell provokes the animosity, not only of Mortimer, but Sims too, by suggesting they improve the Bedlamites conditions. After Nell haughtily rejects Mortimer’s gesture of reconciliation, the scheming conniving Sims persuades him to sign a ‘Commission of Lunacy’, then slants her testimony to ensure that she also finds herself incarcerated in Bedlam. 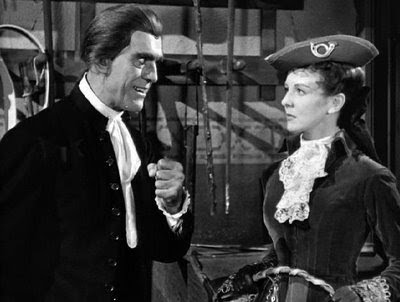 ‘Bedlam’ is the last in a series of nine imaginative low-budget horror films produced by Val Lewton for RKO, starting with understated cult classic ‘Cat People’ (1942) and ‘I Walked With A Zombie’ (1943) through to ‘The Body Snatcher’ (1945) – based around Robert Louis Stevenson’s tale, and preceded by ‘Isle Of The Dead’ (1945) which also stars Karloff, and also takes its theme from visual art – from an Arnold Böcklin painting. Now, a clever and articulate screenplay allows each character their voice, even Sims has his justification for ‘the loony’s in their cages’. ‘They have their world and we have ours’ he argues, and later ‘all those mawkish theories you learned from the Quaker are lies. Men are not brothers. Men are not born good and kind. Even the mindless ones are savage and must be ruled with force.’ On the opposing side of the moral equation, stonemason William Hannay (Richard Fraser) pities the ‘poor and afflicted’ even though his Quaker beliefs don’t allow him to fight on their behalf, ‘it’s a bad time for the poor and the people suffer’ he laments – even without a Cameron-Clegg coalition government! John Wilkes (Leyland Hodgson) was a real-life radical politician and journalist, whose excesses were indeed lampooned by Hogarth as ‘the devil’. He’s shown in a print-shop where they’re churning out such documents on an old winepress-style printing machine. And as Whigs and Tories bicker, he pledges to assist Nell, asserting ‘this is still England, and we have laws here.’ 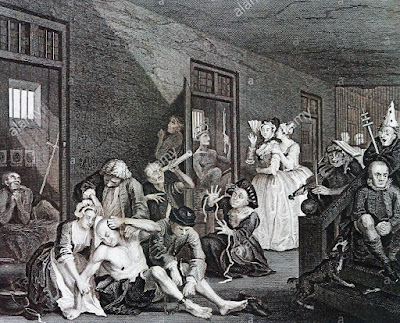 Inside the nightmarish Bedlam, she’s understandably terrified, but gradually comes to terms with a group called the ‘people of the pillar’. There’s ‘Dan The Dog’ (Robert Clarke), a woman who never speaks, and Master Sidney Long (Ian Wolfe) who has devised a flicker-book anticipating the principle of movies, which he cleverly uses to animate ideas of reform. Sims taunts and threatens her, challenges her to reform the insanely violent Tom with her gentle kindness. She accepts, and succeeds. With a ‘lady of the lamp’ candle she attends to the needs of other inmates. Meanwhile, efforts to free her gather momentum outside the walls, but before they can succeed Sims intends inflicting the same monstrous ‘treatment’ on her that reduced Tom to his brain-damaged state. Instead, the Bedlamites rise up and restrain him, allowing her to escapes. With eerie off-kilter echoes of Peter Weiss’ ‘Marat/ Sade’ (1963) – as supposedly performed by the inmates of the Asylum of Chareton under the direction of the Marquis de Sade, Master Long conducts a mock trial leveling charges against the terrified Sims of ‘neglect, cruelty, whippings, beatings, dirty straw to lie upon, chains and starvation’ as a staring inmate chants obsessively ‘split him in two, split him in two’. 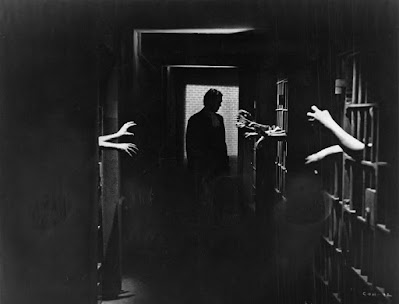 Yet Sims is allowed to state his own defense, that his treatment only reflects the evils of the outside world. And their verdict, ironically, is more just than those of their supposedly sane tormentors. They release him, but as he prepares to bolt, the silent girl impales him with a trowel that Hannay has smuggled into Bedlam for Nell’s self-defense. Protectively, they conceal his mortally-wounded body using stone and mortar to wall him in – anticipating Karloff’s later Roger Corman cycle of Edgar Allan Poe films as his eyes open in horror as the final stone is slotted into place. Finally, with Sims ‘disappearance’, he will be replaced by a ‘better man’. Hannay – who’s faith persuades him that Sims behavior was also a form of madness, suspects the truth, but Nell pleads for his silence. He smiles, they are now a couple. The final storyboard reveals that reforms were implemented in 1773, when a new hospital was built, leading to a more ‘enlightened and sensible treatment of the mentally ill’. Although it’s salient to recall that – in the decades following the release of this film, the Soviet block, and even supposedly progressive regimes elsewhere disposed of inconvenient dissidents and subversive reformers by imprisoning them in mental hospitals and neutralising them with a chemical cosh of drugs. Still, as critic Timothy Sullivan points out, there’s no other movie quite like ‘Bedlam’ (in ‘The Penguin Encyclopedia Of Horror & The Supernatural’, 1986). And in the spirit of William Hogarth’s social-reformist engravings on which it’s based, if this is horror, it’s horror with a social conscience, horror with a warmly beating liberal heart. 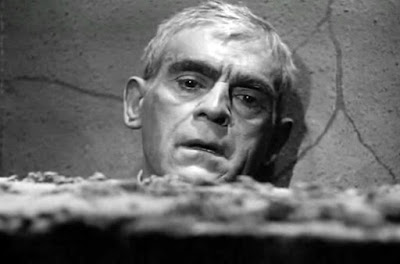 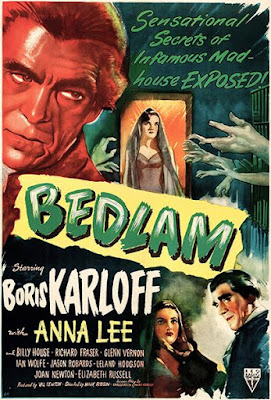 Posted by Andrew Darlington at 14:17